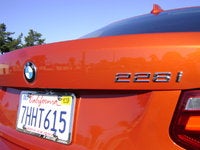 The addition of the Gran Coupe dramatically changes the identity of the 2 Series, and not always for the better. 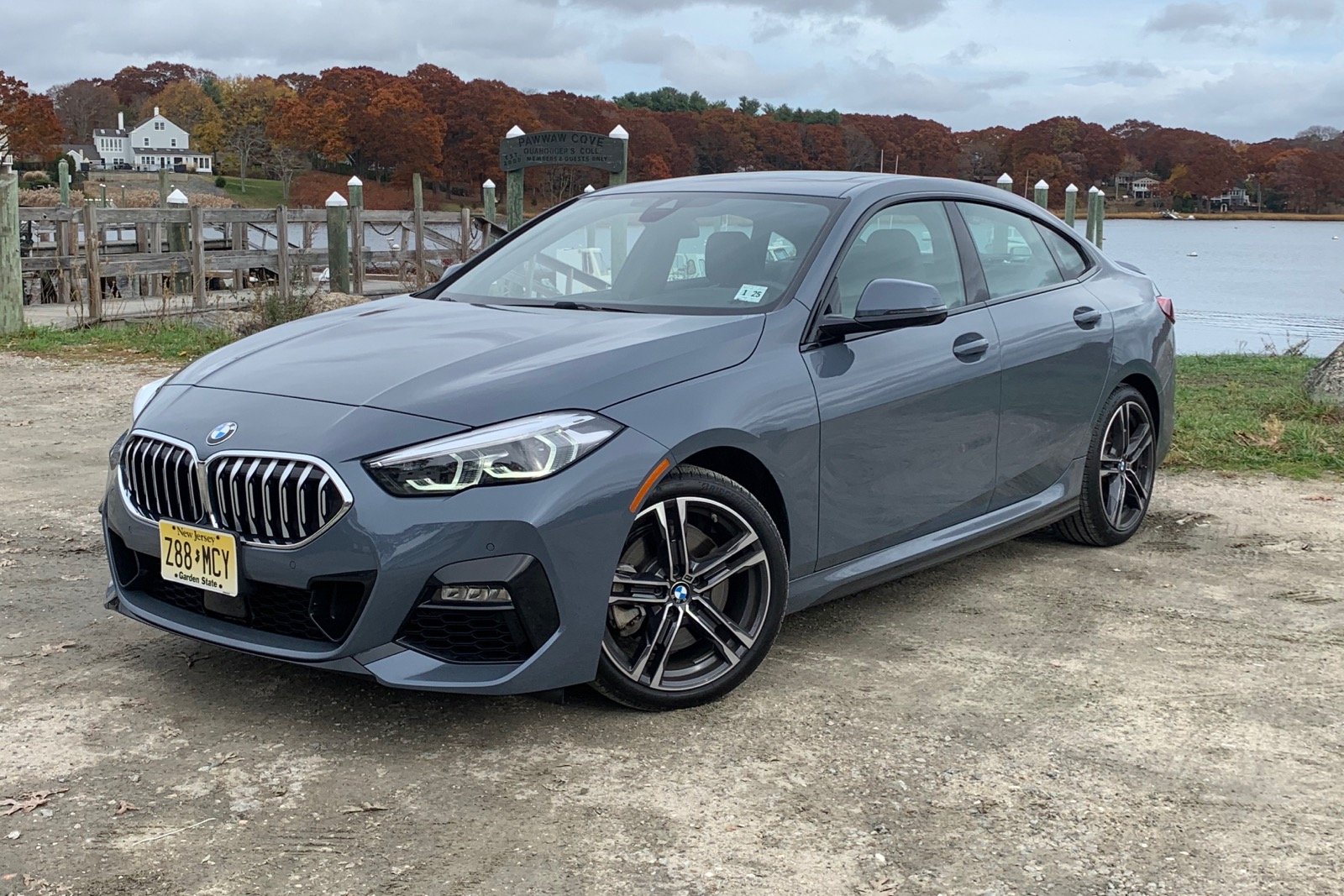 Luxury automakers have had a mixed track record with compact and subcompact vehicles. The angle is “a luxury car you can afford,” but corners are often cut, leaving you with a rather expensive small car that doesn’t live up to the badge on the hood.

That’s the conundrum of the new 2020 BMW 2 Series Gran Coupe. It's an entry-level subcompact sedan that competes with the Audi A3, Mercedes-Benz CLA-Class, and Mercedes-Benz A-Class. Consider BMW's past experience moving downmarket with the X1. The first generation of the subcompact SUV was underpowered, and unimpressive inside. Next time out, the X1 was far more competent. So what does that mean for the 2 Series Gran Coupe? It’s the smallest four-door car offered by BMW and has one of the brand’s lowest base prices. But the mere name 2 Series will draw a comparison to another car with the same name that is a favorite among BMW enthusiasts. Does that put it at a disadvantage? And does that matter, as BMW is hoping to attract new buyers—not aficionados—with the Gran Coupe? 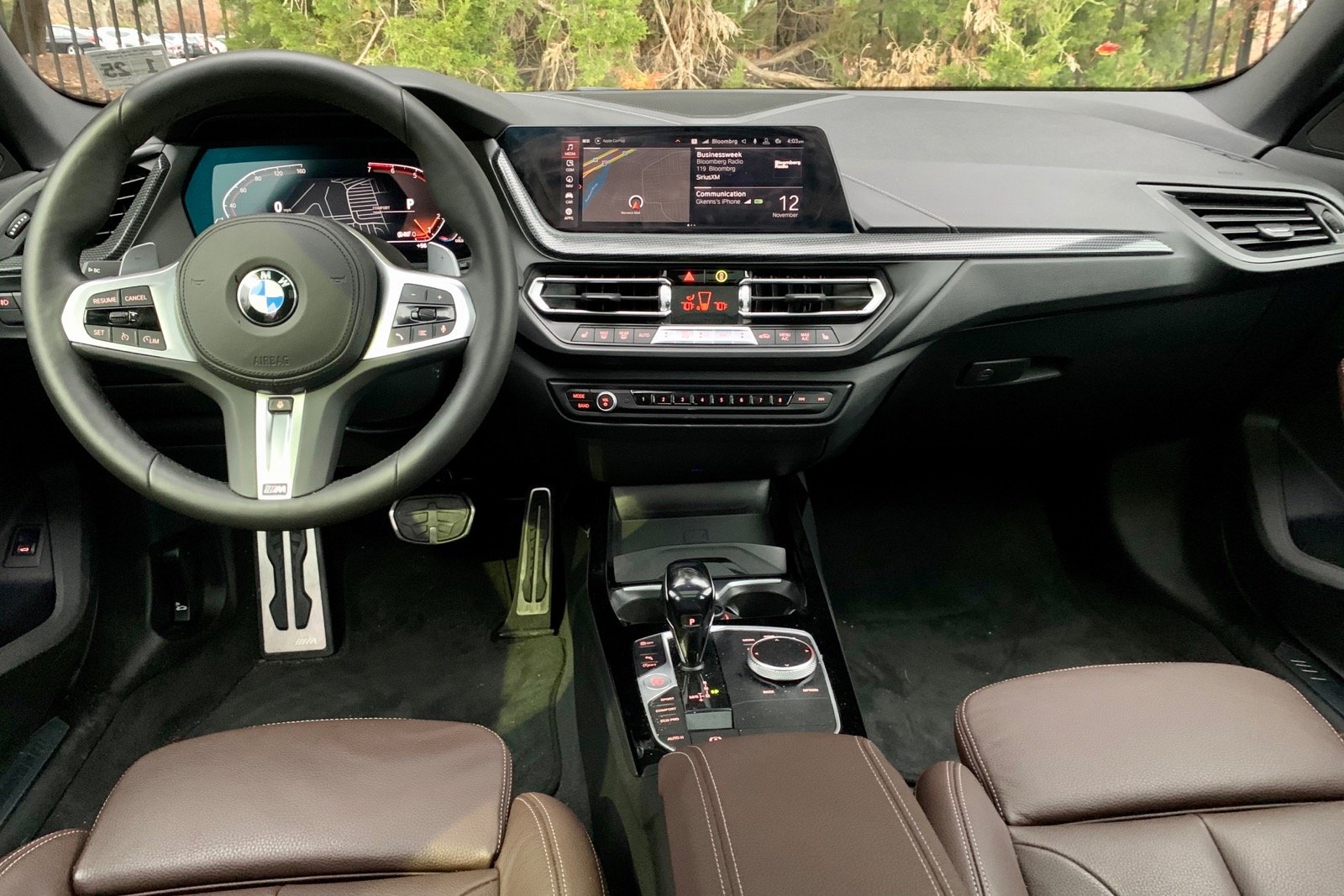 A little glossary lesson for BMW shoppers: “coupe” does not mean “two-door” anymore. This is a disappointing trend from several German automakers, including Mercedes-Benz and Porsche (who should know better). Where a coupe was once a two-door car with two rows of seats, the term has been co-opted to refer to any car with a sloping roofline that tapers off like that of a traditional coupe. This manipulation of the naming convention has extended to sedans, crossovers, and SUVs. In BMW-speak, the Gran Coupe terminology has been used for four-door variants of the 8 Series and 4 Series. The brand at least has the decency to give its fastback SUVs a different name (X6 to X5 and X4 to X3).

So why does this matter? The 2 Series Gran Coupe is a new model, but it joins the established 2 Series lineup. The 2 Series has been sold as a true two-door coupe and convertible since 2014, replacing the BMW 1 Series. The coupe and convertible are some of the last examples of the cars that made BMW so popular among driving enthusiasts. They are simple, compact machines. The traditional three-box shape and rear-wheel-drive (RWD) platform make these cars feel like the 3 Series from two decades ago. They are fantastic purist machines.

The Gran Coupe is built on an entirely new platform, well, at least to the 2 Series. It shares the same basic architecture as the BMW X1 and X2, as well as the Mini Clubman and Countryman. It’s a front-wheel-drive (FWD) bias platform, compared to the RWD bias in the 2 Series Coupe and 2 Series Convertible.

The front end of the 2 Series echoes the styling cues of its much bigger brother, the 8 Series. The swooping headlights flank the angular twin-kidney grille. This front-end styling is modern and athletic, but then we move along to the back of the car. The belt-line and window frames try to maintain a similar aesthetic as the two-door coupe, but it just doesn’t work. Even with frameless doors, the pillars between the front- and rear doors are evident. The way the lower window trim links upward slightly aft of the rear door also looks awkward. On the plus side, the slightly-flared fenders look sharp and the wheels are spaced perfectly to enhance that look. The optional Storm Bay Metallic paint would look fantastic on just about any car.

Inside, the 2 Series Gran Coupe features a modern, purposeful cockpit layout with solid fit-and-finish. While not as elegant as Mercedes-Benz interiors, the BMW holds its own aesthetically, especially with fetching ambient interior lighting.

The three body styles of the 2 Series have various model designations, denoting trim and powertrain. In short, each one is available in a standard output and higher-output variant. The Coupe and Convertible are offered in the 230i and M240i guises. The Gran Coupe is offered in the 228i xDrive and the M235i xDrive forms.

Another option was the Mocha Dakota perforated leather upholstery, upgrading from the standard synthetic leather. These seats are comfortable and supportive. They also feature adjustable seat bolsters for hard cornering. 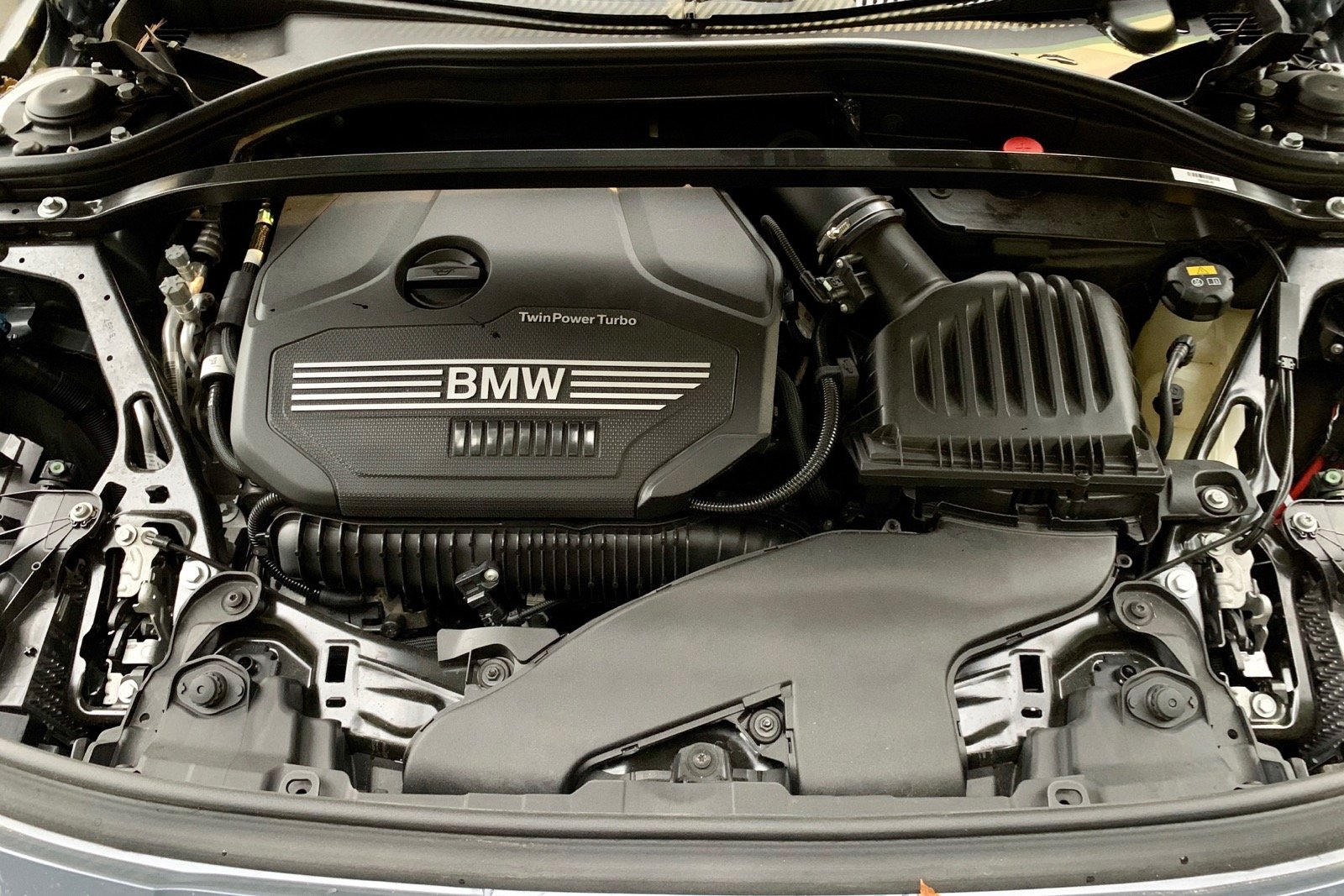 The 228i comes equipped with a 2.0-liter turbocharged four-cylinder engine. It makes 228 horsepower and 258 pound-feet of torque. Power is routed through an eight-speed automatic transmission to the front wheels or xDrive all-wheel drive (AWD). This engine is refined and makes solid power for scooting around main streets and back roads. There is pronounced turbo lag, so pulling away from a standstill is not very exciting. There is a Drive Mode selector with Sport, Comfort, and Eco Pro modes. Sport mode livens things up, but Comfort mode can leave the car feeling sleepy at times.

If you want more power from your Gran Coupe, check out the M235i. It also features a 2.0-liter turbocharged four-cylinder but tuned to put out 301 hp and 331 lb-ft of torque. But if you truly care about the driving experience, look to the Coupe and Convertible. The base 230i makes 248 hp, and the M240i boasts six-cylinder power. Its 3.0-liter turbocharged inline-six puts out 335 hp and 368 lb-ft of torque.

In our 228i Gran Coupe test model, the steering is sharp and responsive. The M Sport steering wheel has a great feel in the driver’s hands. Though the car puts a focus on cornering, it is not as natural as the RWD Coupe and Convertible. Low-speed cornering is fine, but the Gran Coupe’s FWD layout simply lacks that organic feel of a well-sorted RWD car.

Body roll in cornering is minimal, but this is no driver’s car. More crucially, driving over small potholes feels more like sinkholes. The car doesn't absorb road imperfections very well. This is something that’s common as luxury automakers move downmarket and try to bring a sporty driving experience to a smaller, less expensive car (see: Mercedes-Benz GLA). This will also make it a poor choice for New England drivers or anywhere that winters yield new potholes every year. This would be a fine commuter car in southern climates and where roads are well-maintained. 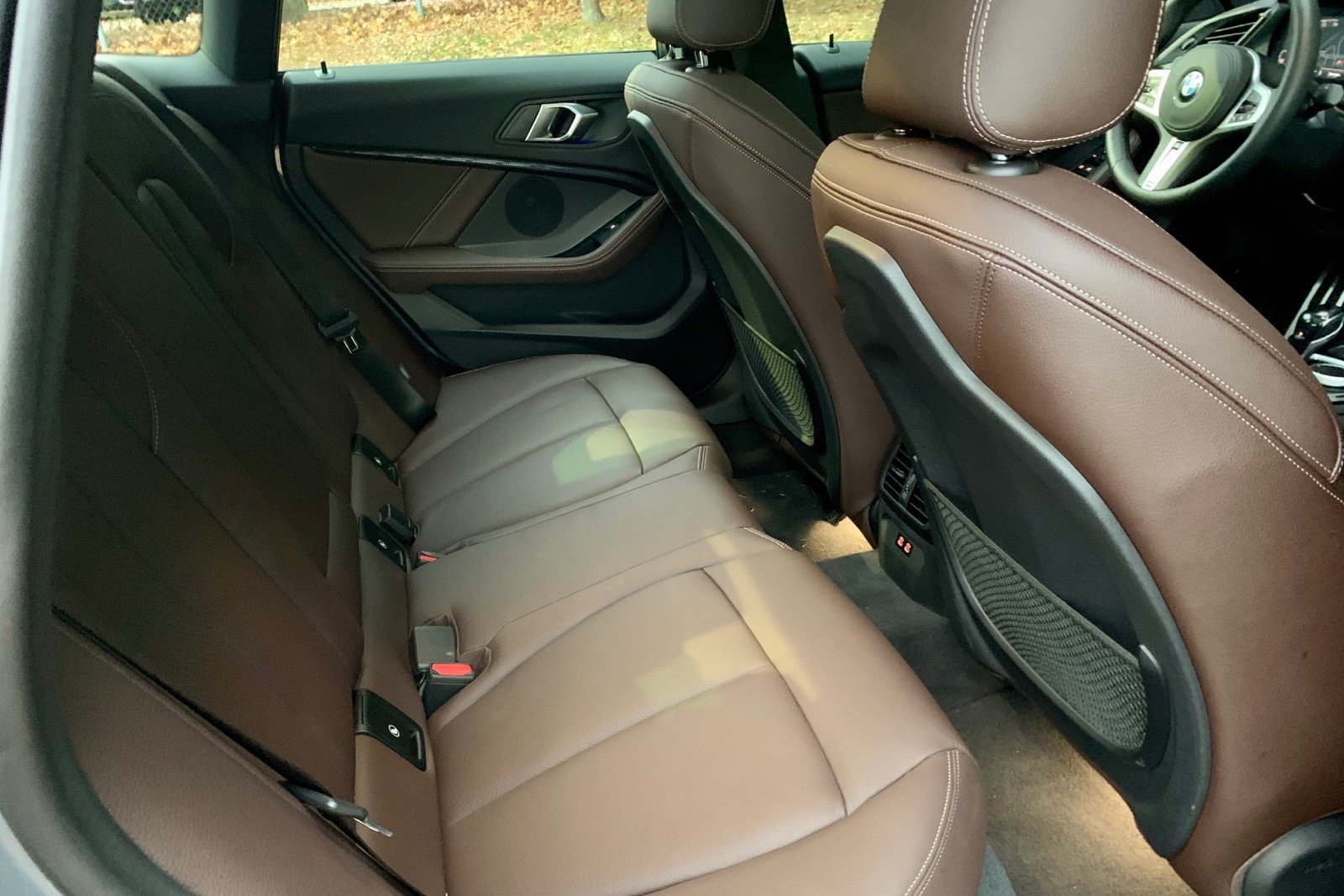 For a subcompact car, the front seats are supportive and comfortable. The driver and front passenger are able to slide their seats back far enough for ample legroom. This severely cuts into the rear-seat legroom, however. In fact, once a driver of even average height sets their seat, the rear-seat legroom essentially disappears. This car is for one or two passengers in most situations; the second row is only usable in a pinch.

The 2 Series has a straightforward cockpit layout. The climate controls are easy to locate, right in the center of the dash. The cupholders and center console are on the small side. If you want to place a larger water bottle at arm’s length, you’ll have to use the in-door cupholders. Even then, a water bottle will barely fit. 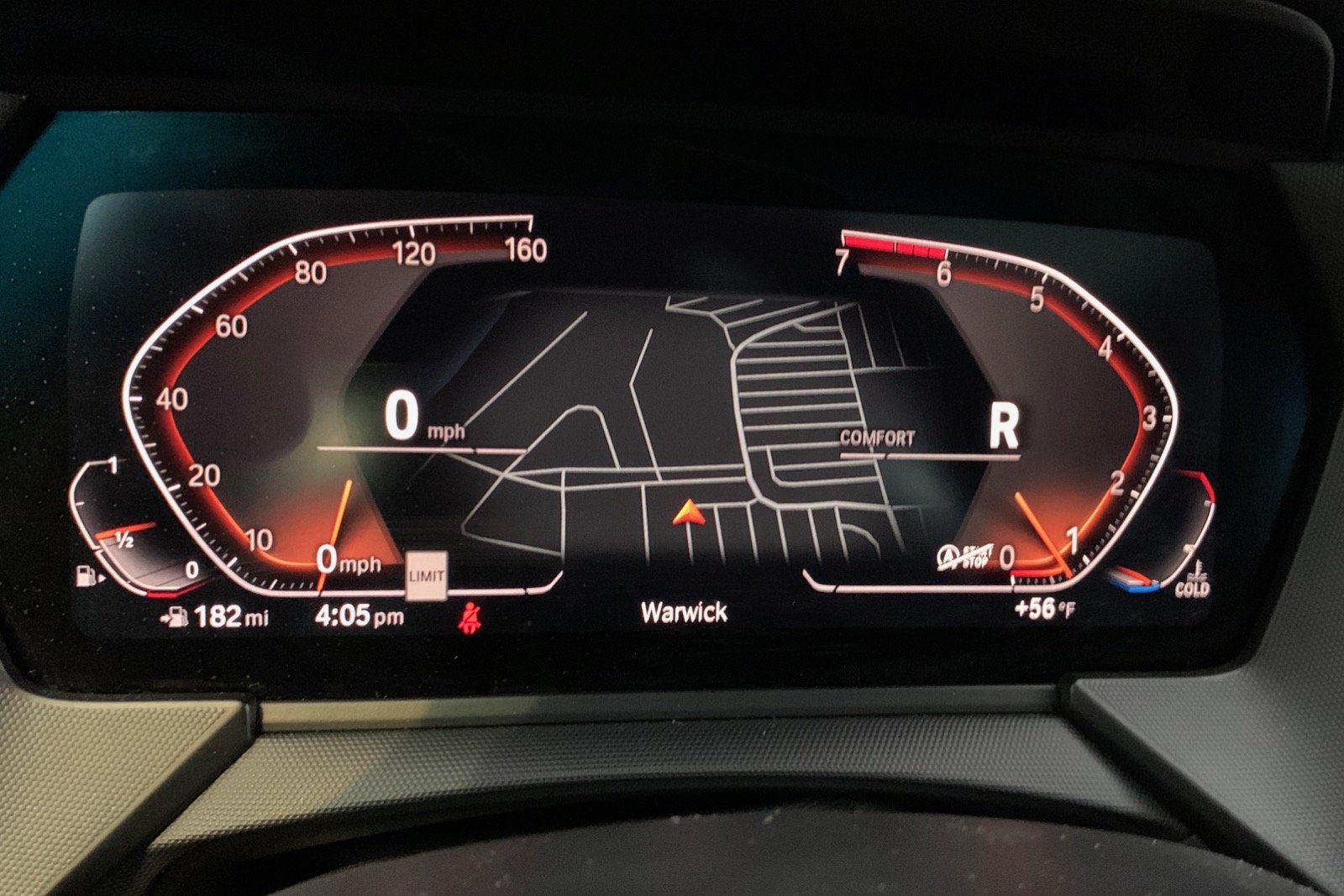 The Coupe and Convertible come standard with a 6.5-inch iDrive display that is controlled via a dial in the center console down by the shifter. The 2 Series Gran Coupe comes standard with a larger 8.8-inch screen that has touch functionality as well as Android Auto. The Gran Coupe gets wireless Apple CarPlay, which is convenient.

Our test model came with a fully-digital instrument panel. It presents the navigation display in the center of the instrument panel, flanked by the tachometer and speedometer. Certain aspects of this screen can be personalized. Our test model also included the available head-up display (HUD), which can also be customized.

BMW has done well to make its infotainment easy to use. Adding touch functionality to the main screen is a must and is well overdue, but the center console buttons are helpful. They allow you to quickly jump around various menus without taking your eyes off the road. 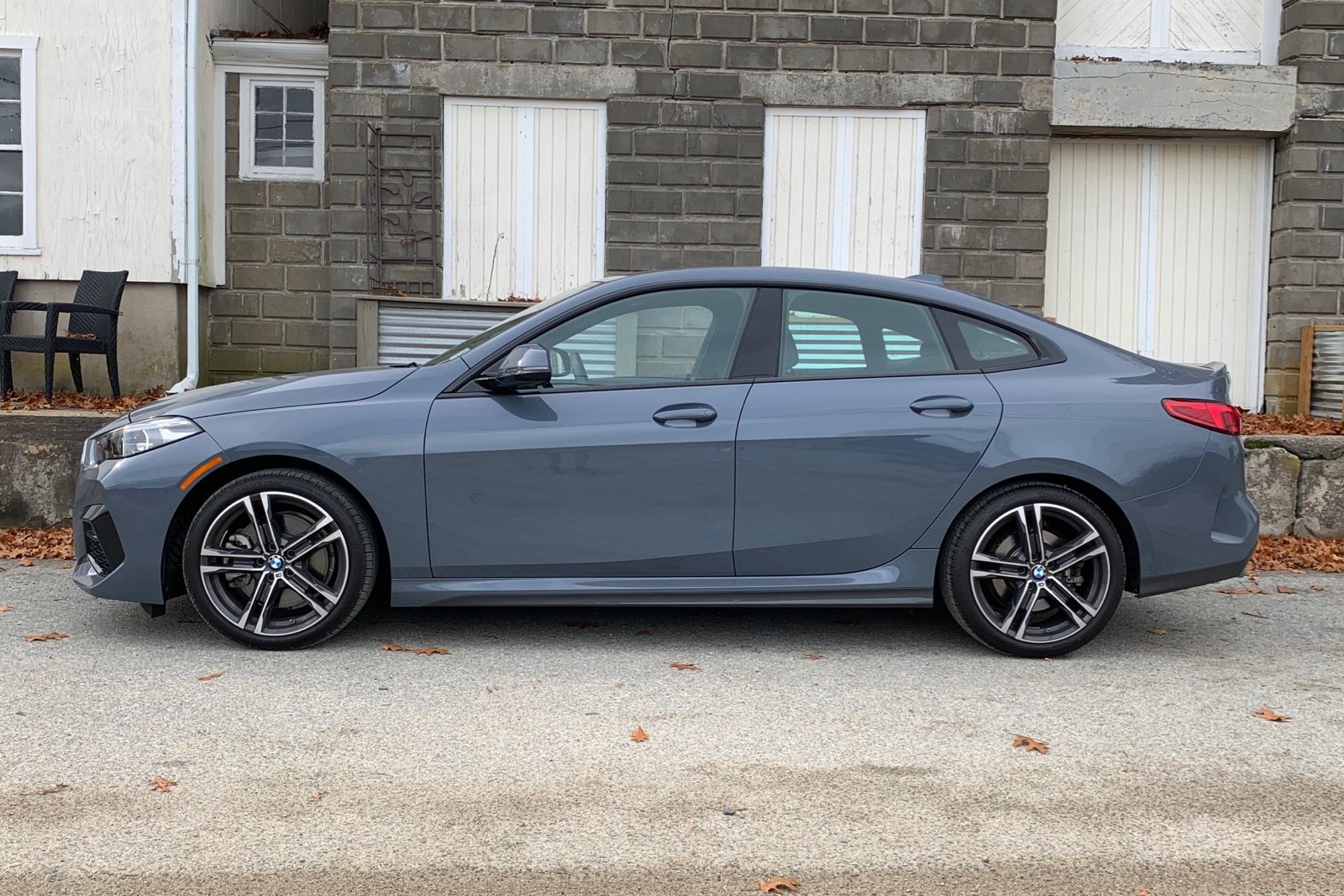 The driver-assist systems are seamless, and alert the driver without being distracting. A button right in the center of the dash allows you to quickly bring up the various systems and customize them to your preference. 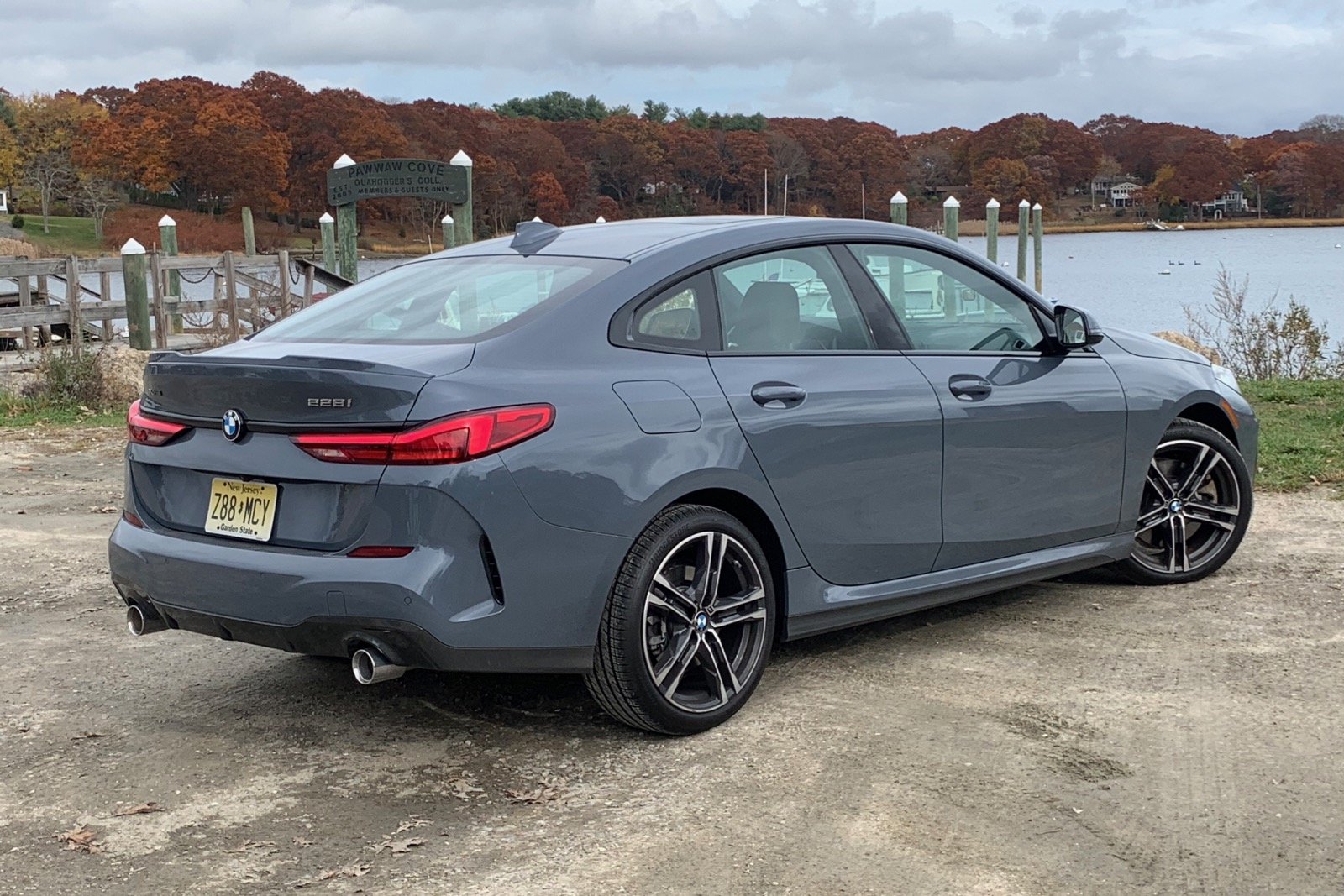 The most efficient versions of the 2 Series are the 230i Coupe and Convertible. The Coupe returns 24 mpg city, 32 highway, 27 combined in EPA testing. The Convertible has the same combined mpg but returns 23 mpg city, 34 mpg highway. The 228i Gran Coupe sort of splits the difference, returning 23 mpg city, 33 highway, 27 combined. In our week of combined city and highway driving, we observed fuel economy of 25.7 mpg. So despite being less powerful and less fun, the Gran Coupe’s xDrive AWD negates any fuel economy advantage.

The 2 Series Gran Coupe is a comfortable, refined daily runabout that has a fun side. It’s an ideal luxury car for anyone living in a crowded city or is tight on parking. But while the additional set of doors make entering and exiting easier, there’s not a lot of rear-seat space, and you lose the RWD layout.

But what makes this car so frustrating is that it perfectly embodies the depressing direction that German luxury brands are going. BMW has taken one of the last true driver’s cars and leveraged that name for a car that is decidedly not one. Reports indicate the next generation of the 2 Series Coupe and Convertible will retain the RWD layout. That’s a relief, but the Gran Coupe tries to check too many boxes and seldom succeeds at any of them. Perhaps the best thing you can say about the 2 Series Gran Coupe is that it gives aspirational shoppers the opportunity to get into a BMW sedan (which it is) at a lower price point than before. These shoppers might be new to the brand, and so will not feel as conflicted as a buyer who knows just how good the 2 Series can be in RWD form.

Guru2DDPS Would it be update or correction to mention that according to official BMW data the 2020 M240xDrive acceleration is actually 4.2 sec. Thats .2 sec less than rear drive M240 and interestingly is the same as 2020 M2 Comp. which has almost 70hp more. Knowing how BMW persistently underrates their cars (tax purposes?) thats probably close to 4sec. Assuming all cars are 'underrated' equally.

Cruising Speed For A BMW230i

I bought a new BMW230i seven months ago and I'm worried about pushuing it too hard while driving on the highway? By pushing it I mean cruising at a proper speed. Is it okay to keep it at 70mph? Thanks

44 views with 5 answers (last answer about a year ago)