Looking for a Used Q8 in your area?

Audi has turned its attention to making a performance-focused crossover that can be driven on the street and track, making it ready to go head-to-head with the BMW X6, Mercedes-Benz GLE Coupe, and Porsche Cayenne Coupe. 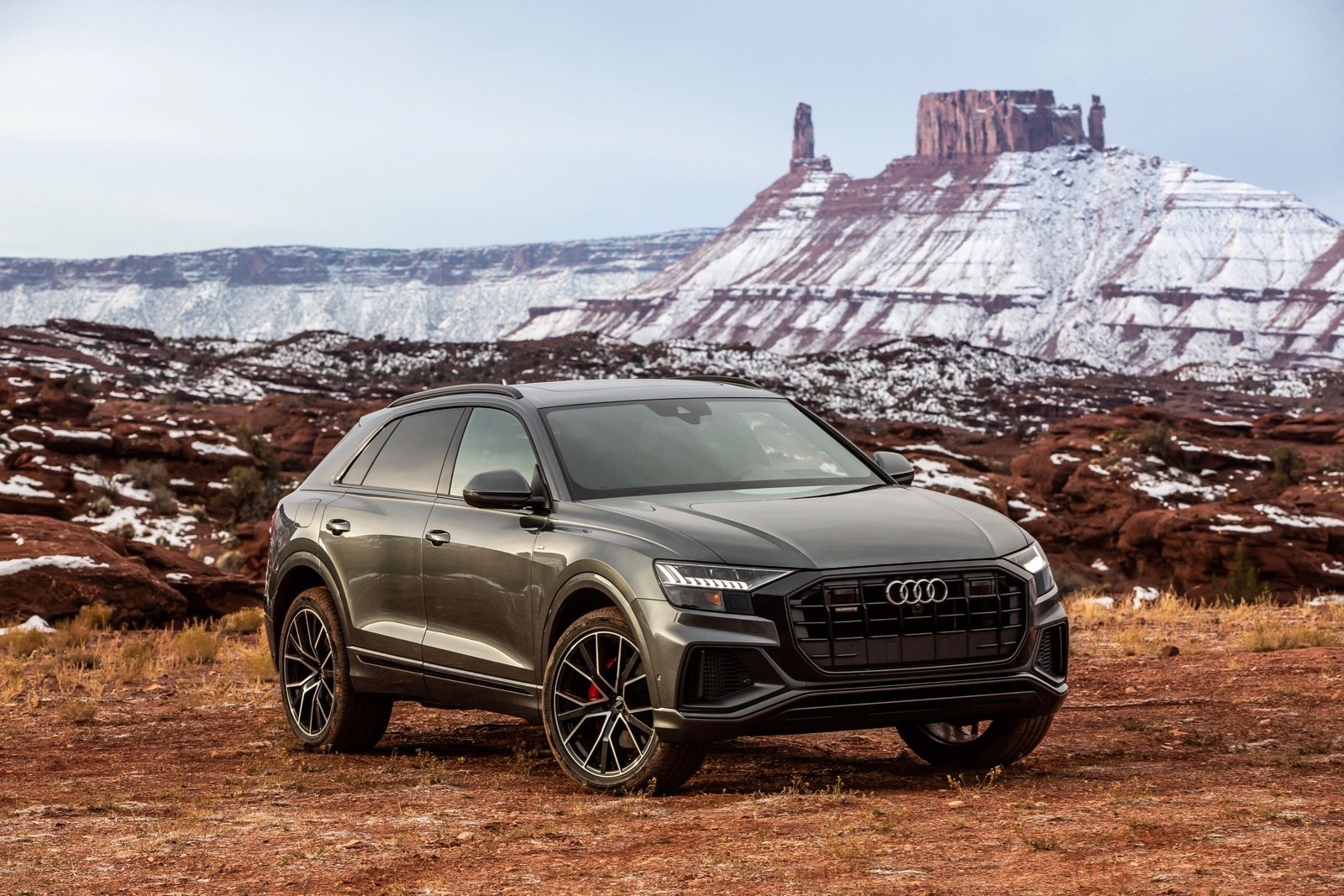 The two-row Audi Q8 delivers a lot of what affluent buyers are looking for. Its two higher-grade performance variants, the Audi SQ8 and Audi RS Q8 give buyers the option of adding more power and improved drive dynamics for the otherwise relatively traditional luxury SUV. It faces stiff competition in its segment but is positioned to be a worthy challenger. 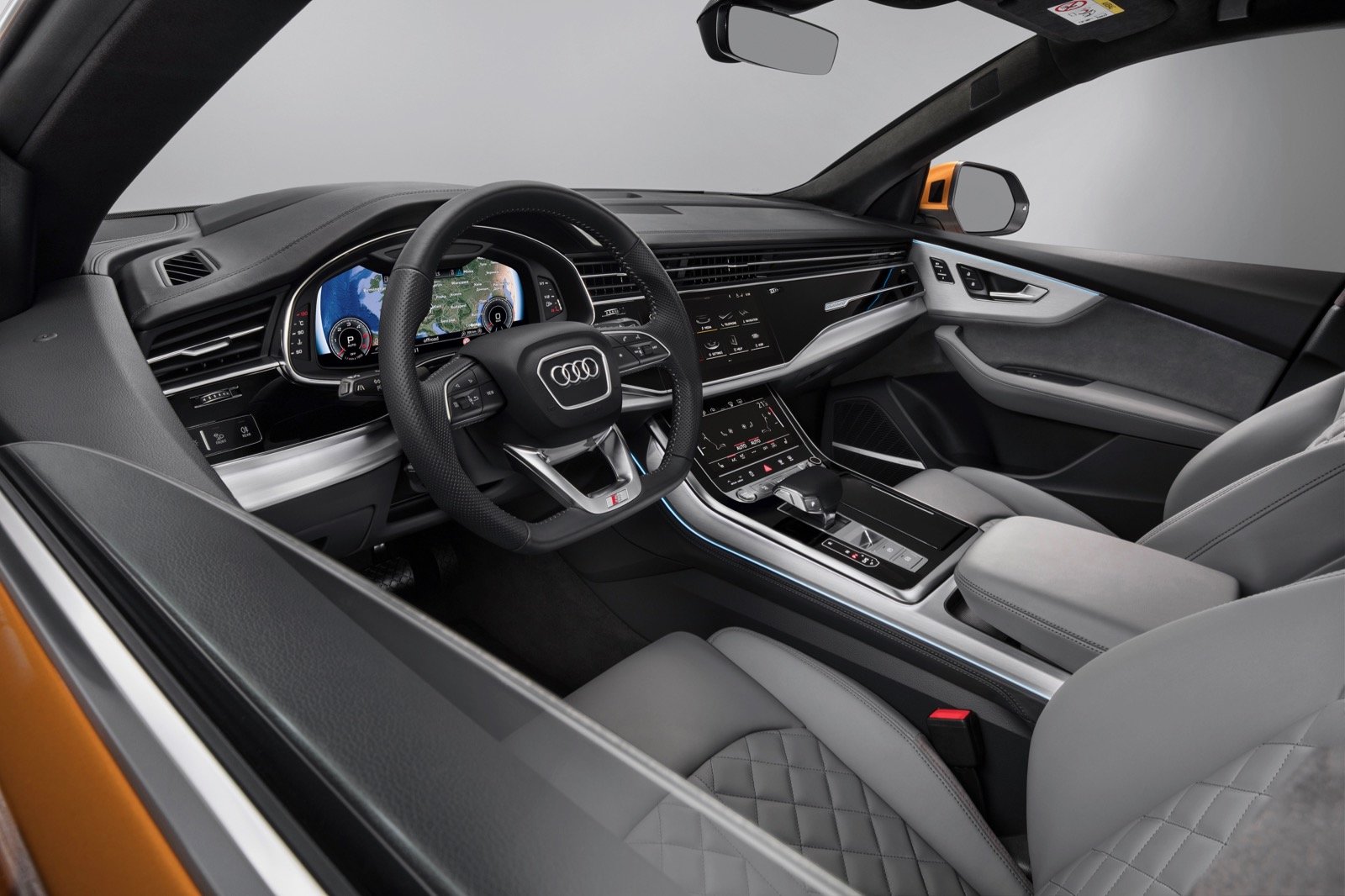 If the exterior of the Audi Q8 looks familiar, it should. The model can’t kick its familial looks and, in fact, it doesn’t try to. The Audi’s SQ8 and RS Q8 variants follow the same distinctive styling accents and badging that are formulaic throughout the Audi lineup. Its coupe-like roofline is one of the major distinguishing exterior design elements between the Q8 and Q7. This sloped roofline is one reason why there is no third row in this SUV.

This results in a rather mundane looking Q8, somewhat aggressive SQ8, and more aggressive RS Q8. Audi has given all models its Singleframe grille, LED headlights with LED daytime running lights (RS Q8 models get high-definition Matrix-design ones), aluminum window surrounds and roof rails, rear privacy glass, and tailgate roof spoiler. Power-adjustable, power-folding and heated exterior side mirrors are available on the Q8 and come standard with memory on the SQ8 and RS Q8.

The RS Q8 has design accents that are specific to its trim level including a honeycomb grille and side blades while the SQ8 has the toned-down versions of those features. The look of the exhaust changes based on the model though their location remains the same, at least one on each side at the rear of the vehicle.

Audi has given the Q8 and SQ8 standard 21-inch wheels. The RS Q8 and the Q8 with the S Line Plus Package get 22-inch wheels.

Several packages are available for the flagship SUV including the Black Optic package that adds back exterior trim elements and roof rails.

An air suspension is standard on the SQ8 and RS Q8.

Setting foot in the Audi Q8, there’s no doubt that it’s a luxury SUV. While the base model Q8 has leather upholstery with perforated seats to choose as an option, the SQ8 and RS Q8 up the ante. The SQ8 has perforated diamond-stitched Valcona S sport seats with ventilation while the RS Q8 changes out the diamond stitching of the SQ8 for honeycomb stitching. Heated front seats are standard in every model.

The digital displays and multi-screen infotainment/climate control setup give the model a look of luxury that is accented by real wood and metal bezels and trim pieces. 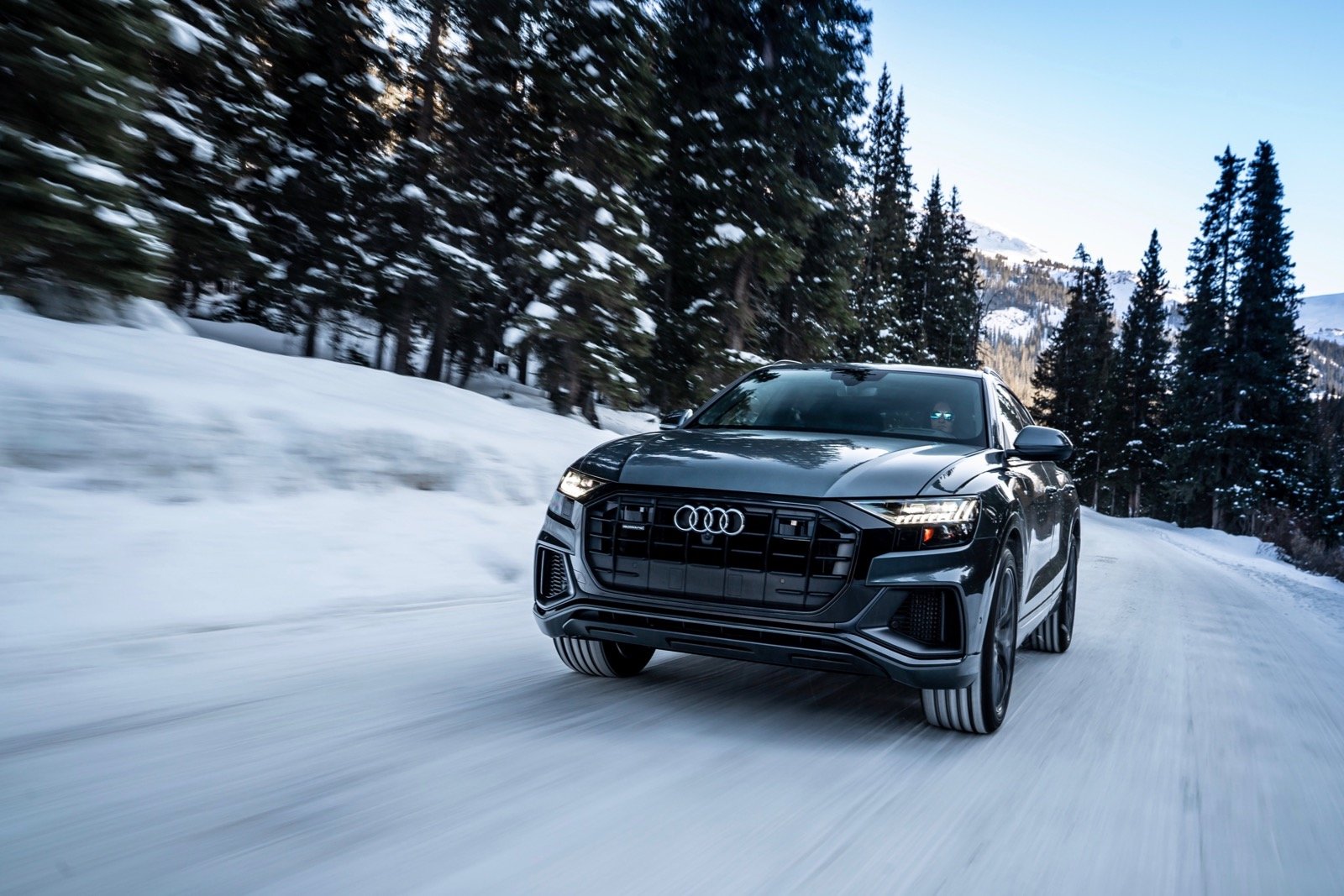 Audi powers every Q8 with a turbocharged 3.0-liter six-cylinder engine that is paired with an eight-speed automatic transmission. Audi denotes its turbo models using the TFSI (Turbocharged Fuel Stratified Injection) initialism. The powertrain gets 335 horsepower and 369 pound-feet of torque, which yields a sufficient, though uninspiring amount of power. The SUV’s transmission delivers a smooth transition from gear to gear as the SUV gets up to its top speed of 130 mph on the track. The SUV gets from zero to 60 mph in 5.6 seconds.

The Audi Q8 gets an EPA-estimated 17 mpg in the city, 21 mpg on the highway, and 18 mpg combined. The two-row SUV’s fuel economy is only as good as the full-size SUVs from the General Motors lineup. But, those SUVs are significantly bigger than the Q8 and offer much more cargo room and passenger space.

Audi’s sportier Q8 variants, the SQ8 and RS Q8, offer much more invigorating performance. The SQ8 is powered by a turbocharged 4.0-liter V8 engine that is also paired with an eight-speed automatic transmission. That turbo engine gets 500 horsepower and 568 pound-feet of torque. It’s slightly less fuel-efficient than the Q8 getting an EPA-estimated 15 mpg in the city, 21 mpg on the highway, and 17 mpg combined. Buyers can opt to include a 48-volt mild-hybrid system, which increases fuel efficiency, in their SQ8 for a surcharge. The V8 has a top track speed of 155 mph and can get off the line and to 60 mph in 4.3 seconds.

The RS Q8 is the top-performing Audi Q8 variant. It has the same V8 as the SQ8 but the engine includes 48-volt mild-hybrid technology and is tuned to achieve 591 horsepower and 590 pound-feet of torque. It can swiftly get from zero to 60 mph in 3.7 seconds. The RS Q8’s top speed is 174 mph but with optimal setup, drivers can push that limit up to 190.

All that performance means that you’re sacrificing fuel economy. The RS Q8 gets 13 mpg in the city, 19 mpg on the highway, and 15 mpg combined.

An all-wheel-drive (AWD) drivetrain, which Audi calls Quattro, is standard on each model, as is a 22.5-gallon fuel tank. 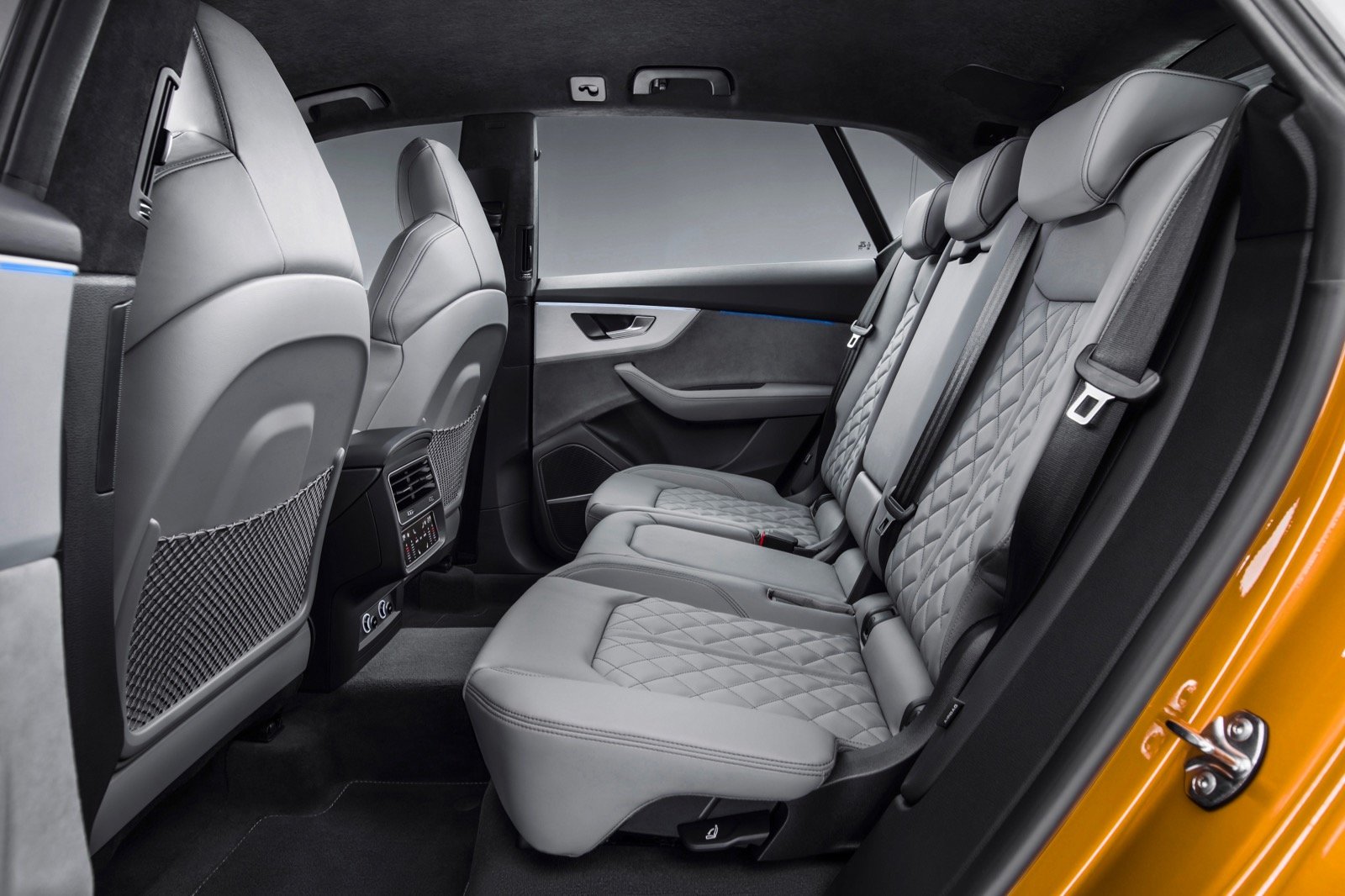 The two-row Audi Q8 isn’t designed to haul around your entire family and their luggage, sports equipment, and your work supplies at the same time, though it could fit at least the cargo.

Audi traditionally excels at putting buttons, switches, and dials where you’d think they should be. The Q8 is no exception. Having fully-digital climate controls takes some getting used to and finger placement isn’t as natural a movement as reaching over and touching a button. Screens require a level of preciseness that physical buttons don’t. It’s easy then for a driver’s eyes to be taken off the road for longer with a touch screen to make an adjustment than with physical controls.

The issue with these controls extends to the infotainment system touch screen where there is no good place to rest your hand while scrolling through options. Though most users won’t have this issue, it’s worth considering if you’re one who likes to scroll through radio stations like they’re free samples at Costco.

The Q8’s seats are comfortable in both rows and there’s a good amount of space for four average-sized adults. It has a 40/20/40 split-folding seat that goes nearly flat (mostly flat with weight on it).

Audi has designed the cargo floor of the Q8 to be smooth and free of wheel-well bump outs that would make loading cargo more difficult—giving it more practicality than some SUVs on the market today. There’s some catch-all small-item storage space along the walls that is a nice, practical touch. All models come standard with a power tailgate. 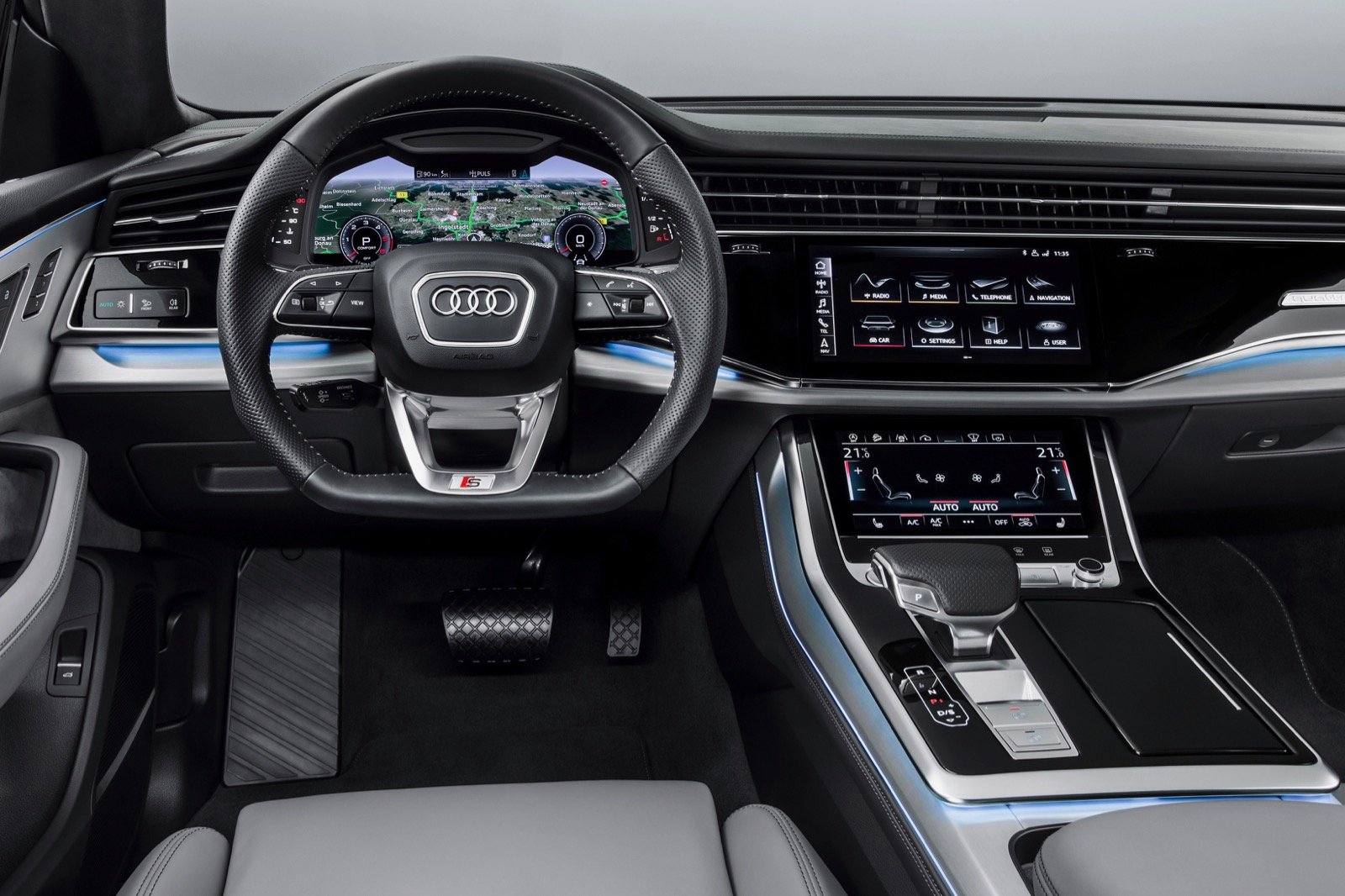 The Audi Q8 has many of the standard features luxury-car buyers would expect. This includes tri-zone automatic climate control (four-zone is available on the Q8 and standard on the SQ8 and RS Q8), a heated steering wheel, keyless entry, power tilt/telescope steering column with memory, a panoramic sunroof with power sunshade, and driver seat memory.

Audi has divided the control for the car's vital comfort, convenience, and entertainment functions into two different screens. Audi's MMI operating system runs both with traditional infotainment offerings on a larger screen at the center of the dashboard and a smaller screen with climate-control functions below it. 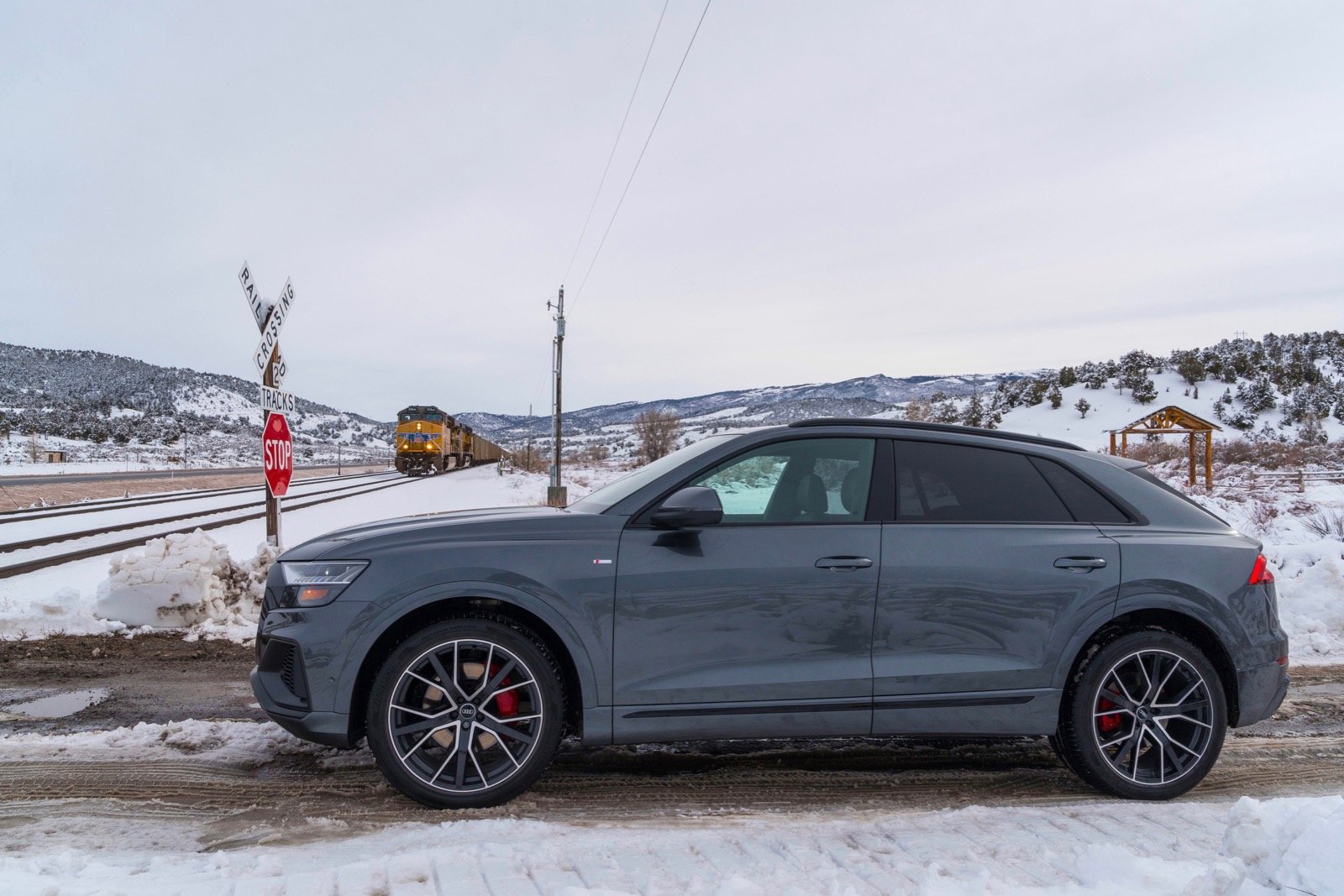 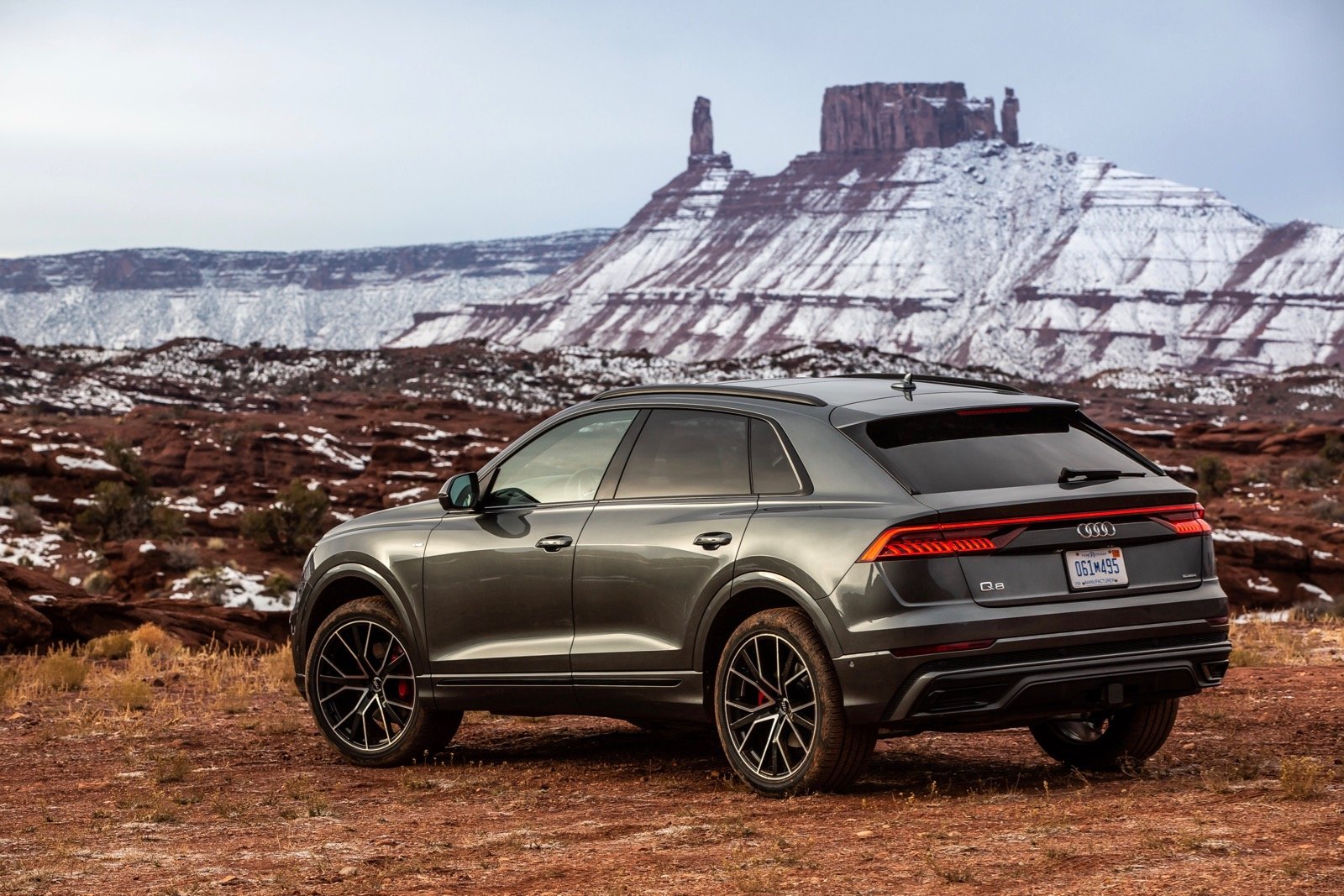 The X6 does slightly better on gas, especially the base model, which is powered by a turbocharged 3.0-liter V6 that gets 22 mpg combined. The V8 engines in the BMWs also have mild-hybrid technology.

Another key competitor to the Audi Q8 is the Mercedes-AMG GLE Coupe. Mercedes sells the models in regular and S variants. The AMG GLE 53 Coupe has a starting MSRP of $76,500, which is slightly lower than the midgrade BMW X6 and Audi SQ8 that it’s most comparable with. It also has less horsepower and torque.

Pricing on the AMG GLE 63 S Coupe is coming soon but it will likely be similar to the Audi RS Q8 and highest grade BMW X6 M.

The Porsche Cayenne is another contender for a driving enthusiast's money in this category. It's offered starting at $67,500, which is right in line with the Q8, but can go as high as $166,200 for the Cayenne Turbo S E-Hybrid Coupe.

Similarities don’t end there. The four models have comparable feature lists and safety tech. Which you opt for generally comes down to one factor: which you like driving best.

Looking for a Used Q8 in your area?

What Should The Discount Bee For A Dealer Demo Or Exec Car With 5000 Miles ...