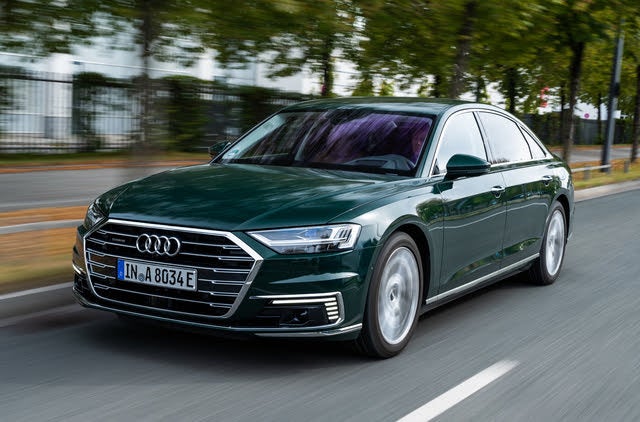 The Audi A8 luxury sedan is the halo car in Audi’s lineup, and it was just redesigned for 2019. This year, a new plug-in hybrid (PHEV) variant joins the lineup, boosting performance and adding appeal for environmentally conscious potential buyers. The A8 competes against the Mercedes-Benz S-Class, BMW 7 Series, Cadillac CT6, and Jaguar XJ.

The Audi A8 Hybrid Plug-in gets the same subtle exterior treatment as the rest of the lineup. It looks elegant and high-tech without being desperate for attention. This version of the A8 does get unique lighting, and 19-inch wheels come standard.

The plug-in hybrid A8 is known as the 60 TFSI e, and it features a turbocharged 3.0-liter V6 engine paired with an electric motor, as well as an 8-speed automatic transmission and a 14.1kWh lithium-ion battery. Total system output is an impressive 443 horsepower and 516 pound-feet of torque. The EPA says the A8 PHEV has 17 miles of all-electric range and a total range of 420 miles, and it gets an estimated 54 miles-per-gallon equivalent. Standard driving modes include a hybrid mode, an electric mode, and a hold mode that helps conserve electric range for later. In electric mode, the A8 provides audio cues to alert nearby pedestrians.

Standard features in the A8 PHEV's swanky, super-size cabin include leather upholstery and a panoramic sunroof. Options include upgraded upholstery, multicolored ambient lighting, and heated, cooled, and massaging seats.

With this new plug-in hybrid variant, Audi’s flagship A8 sedan brings new levels of performance and efficiency while maintaining elegance.

Have you driven a 2020 Audi A8 Hybrid Plug-In?
Rank This Car