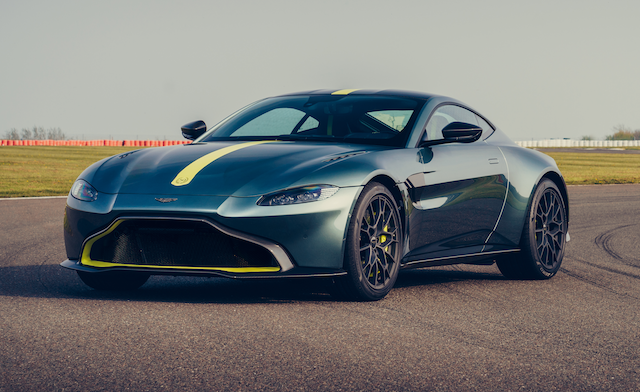 Looking for a New Aston Martin Vantage in your area?

For 2020, Aston Martin introduces the new Vantage AMR, a racier version of the normal Vantage that boasts a manual transmission.

While production is limited to just 200 cars worldwide, this car is making a big splash. The Vantage AMR distinguishes itself from the regular car with one of five paint schemes and special 20-inch aluminum wheels. The bulk of the production run, 141 cars, will come in either Sabiro Blue, Onyx Black, China Grey, or White Stone. The remaining 59 will come in “Vantage 59” livery, which echoes Aston’s overall win at the 24 Hours of Le Mans in 1959. This paint scheme includes Stirling Green and Lime on the outside with Dark Knight leather and Alcantara on the inside.

Under the hood of the AMR is the same 4.0-liter twin-turbo V8. Horsepower stays the same at 503 horsepower, but torque is down to 461 pound-feet. The quoted 0-60 time increases from 3.6 seconds to 3.9 seconds due to the manual gearbox in the AMR. Speaking of the gearbox, it’s a 7-speed fitted with a rev-matching system that Aston Martin calls Amshift. The regular Vantage features an 8-speed automatic transmission.

The AMR version of the Vantage weighs 209 pounds less than the regular car. The AMR also gets a tweaked limited-slip differential, standard carbon-ceramic brakes, and the latest adaptive damping system with Sport, Sport+, and Track driving modes. Sport exhaust and sport seats, which are optional on the regular car, come standard on the AMR.

The Vantage AMR isn’t a hardcore track-day toy, but a slightly lighter and more driver-focused Vantage. With just 200 slated for production, few will be lucky enough to grab one.

What's your take on the 2020 Aston Martin Vantage?

Have you driven a 2020 Aston Martin Vantage?
Rank This Car

Enter your zip to see incentives for a new Vantage in your area.

Looking for a Used Vantage in your area?