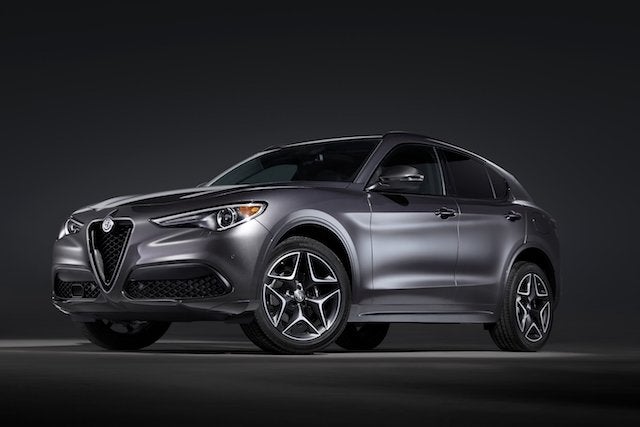 Alfa Romeo joined the SUV party in 2018 with the Stelvio, a compact crossover based on the company’s Giulia sedan. The Giulia is already a dynamic, fun-to-drive 4-door with punchy engines and direct steering; the Stelvio is a taller and slightly heavier version of the same thing.

Most versions of the Stelvio get a 2.0-liter turbocharged 4-cylinder. It’s small, but it packs a punch with 280 horsepower and 306 pound-feet of torque, good enough to get the SUV to 60 mph in 5.4 seconds and on to a 144-mph top speed. The engine shifts through an 8-speed automatic. Rear-wheel drive is standard, but all-wheel drive is an available and popular option.

King of the hill in the Alfa Romeo range for both Giulia and Stelvio is the Quadrifoglio (the Italian word for the four-leaf clover found on the Alfa Romeo badge), which gets a twin-turbo V6 with 505 hp. In the Stelvio, the Quadrifoglio trim comes in AWD only. Top speed is reportedly 176 mph and 0-60 comes in less than 4 seconds. Most road testers consider the Stelvio one of the sharpest vehicles in its class, regardless of trim.

The interior of the Stelvio is a nice place to sit, with soft leather over well-bolstered seats and available wood or leather trim. Apple CarPlay and Android Auto compatibility, dual-zone automatic climate control, and a power liftgate are standard. Tempting options include heated rear seats, a heated steering wheel, and front parking sensors.

For people who need a midsize crossover but could use a little excitement behind the wheel in between grocery runs, the Stelvio carries a lot of appeal. It has its quirks, but it wouldn’t be an Alfa Romeo if it didn’t. It also arguably has more personality than its competitors, which include the Porsche Macan, Audi Q5, Jaguar F-Pace, Mercedes-Benz GLC-Class, and BMW X3.

What's your take on the 2020 Alfa Romeo Stelvio?

Have you driven a 2020 Alfa Romeo Stelvio?
Rank This Car