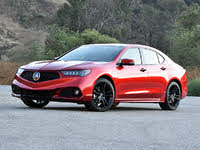 Lately, it is often said that Acura has forgotten its roots. Take an all-wheel-drive 2020 Acura TLX on a road you know well, and you might disagree. 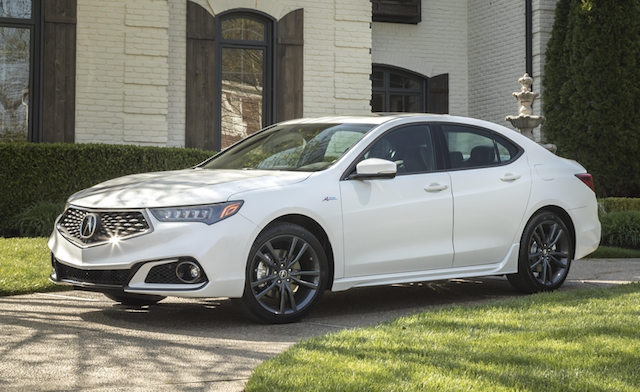 More than Infiniti and Lexus, Acura has consistently positioned itself as the Japanese luxury brand for driving enthusiasts. But for a while, some of the company's successful products were anything but fun to drive. However, when equipped with Acura's Super Handling All-Wheel Drive (SH-AWD), the TL sedan, and since 2015, the TLX that replaced it, have always shown people a good time—particularly those who prefer to take the road less traveled. But that doesn’t mean the 2020 Acura TLX is flawless. Far from it, actually. 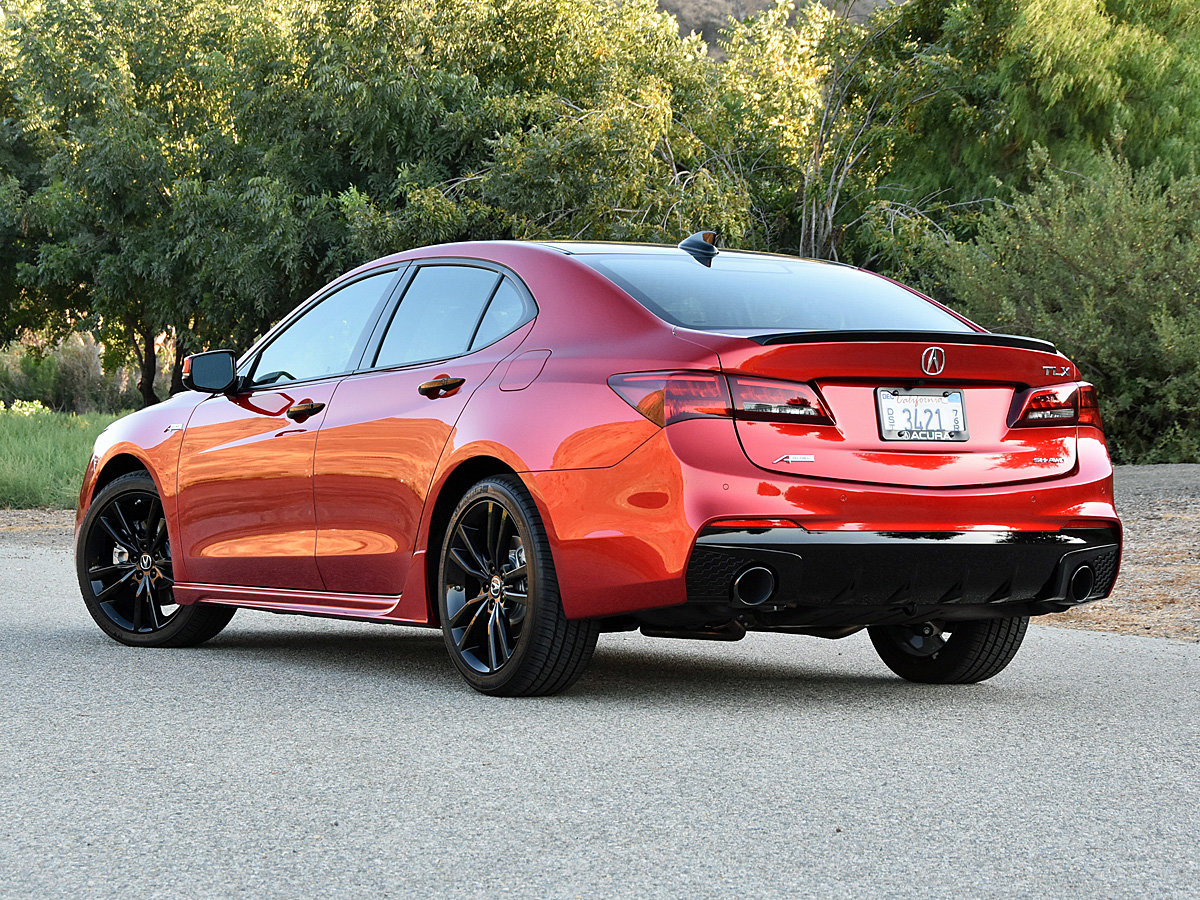 A few years ago, Acura slapped a new nose on its TLX midsize sedan, curing a design cancer that had spread to the company’s entire lineup. As a result of this rhinoplasty, the 2020 TLX is a handsome—if somewhat anonymous—car.

That’s why you need to choose the A-Spec option package, which improves the styling with go-faster visual upgrades like 19-inch wheels, revised bumper designs, side sill skirts, and oversize round exhaust outlets. 360 lucky owners will also enjoy the new 2020 Acura TLX PMC Edition.

My test car was the PMC Edition, priced at the top of the TLX lineup at $50,945, including Acura's $1,995 destination fee. Non-PMC cars cost only $995 to transport to a dealership, meaning you can spend as little as $33,995 on a 2020 TLX. But CarGurus recommends upgrading with the Technology Package ($3,700) for its comfort, convenience, safety, and infotainment enhancements. Add the A-Spec Package ($2,700) for its racy appearance, and you’ve got a good-looking TLX for less than $40,000.

But at that price, the car still won’t have the powerful 3.5-liter V6 engine and SH-AWD. 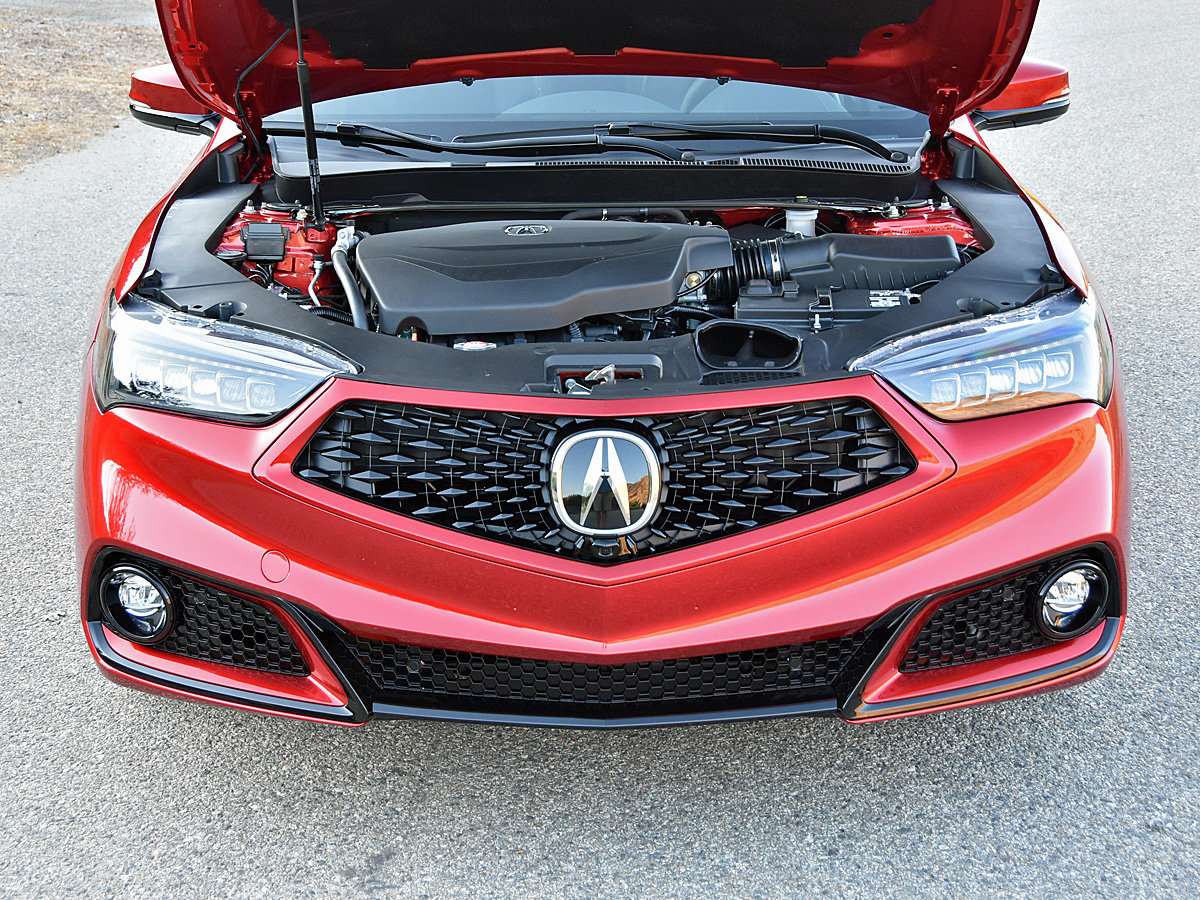 The PMC Edition comes with everything you can get on an Acura TLX, including the A-Spec and Advance option packages, a combination unavailable on other versions, so it's not surprising that the PMC Edition also has the top-performing powertrain.

Instead of the standard 206-horsepower, 2.4-liter 4-cylinder engine and 8-speed dual-clutch automatic transmission driving the front wheels, the TLX PMC features the 290-hp, 3.5-liter V6 engine, 9-speed automatic, and torque-vectoring SH-AWD system. The only downside to this more powerful drivetrain is that the 267 pound-feet of peak torque takes awhile to show up, arriving at 4,500 rpm.

Unlike a turbocharged engine, which delivers its punch of torque down low and across a broad portion of the engine’s rev range, this creamy smooth V6 provides a steady build-up of power, the car gathering speed with increasing urgency as it rushes forward. Switch from Econ or Normal mode into Sport or Sport+ mode, and a TLX turns into a real thrill ride.

As enjoyable as it is to run the TLX to redline, the greatest contributor to this Acura’s capable driving dynamics is the SH-AWD. A torque-vectoring system, it can put up to 70% of total engine output to a single rear wheel. From the driver’s seat, you can feel it. Stab the gas pedal at mid-corner, and the TLX pivots and lunges out of the curve and down the next straight.

Though it has nine forward speeds, the automatic transmission remains well behaved, and the paddle shifters are pleasing to use. Sophisticated amplitude reactive dampers contribute to the TLX’s feeling of solidity on the road, as do the somewhat heavy steering and the fact that 61% of the car’s weight sits over the front wheels.

For daily driving as opposed to canyon carving, the Acura TLX feels comfortable and quiet, a lovely place to spend time when traffic is clogging the freeway. The car’s impressive handling capabilities do not require trade-offs in terms of ride quality, either. The TLX feels firm but not too stiff on city streets and highways.

On my testing loop, the TLX returned 23 mpg, which is exactly what the EPA says the car should provide in combined driving. And remember, I was using the paddle shifters in Sport and Sport+ driving modes during the mountainous part of the route. 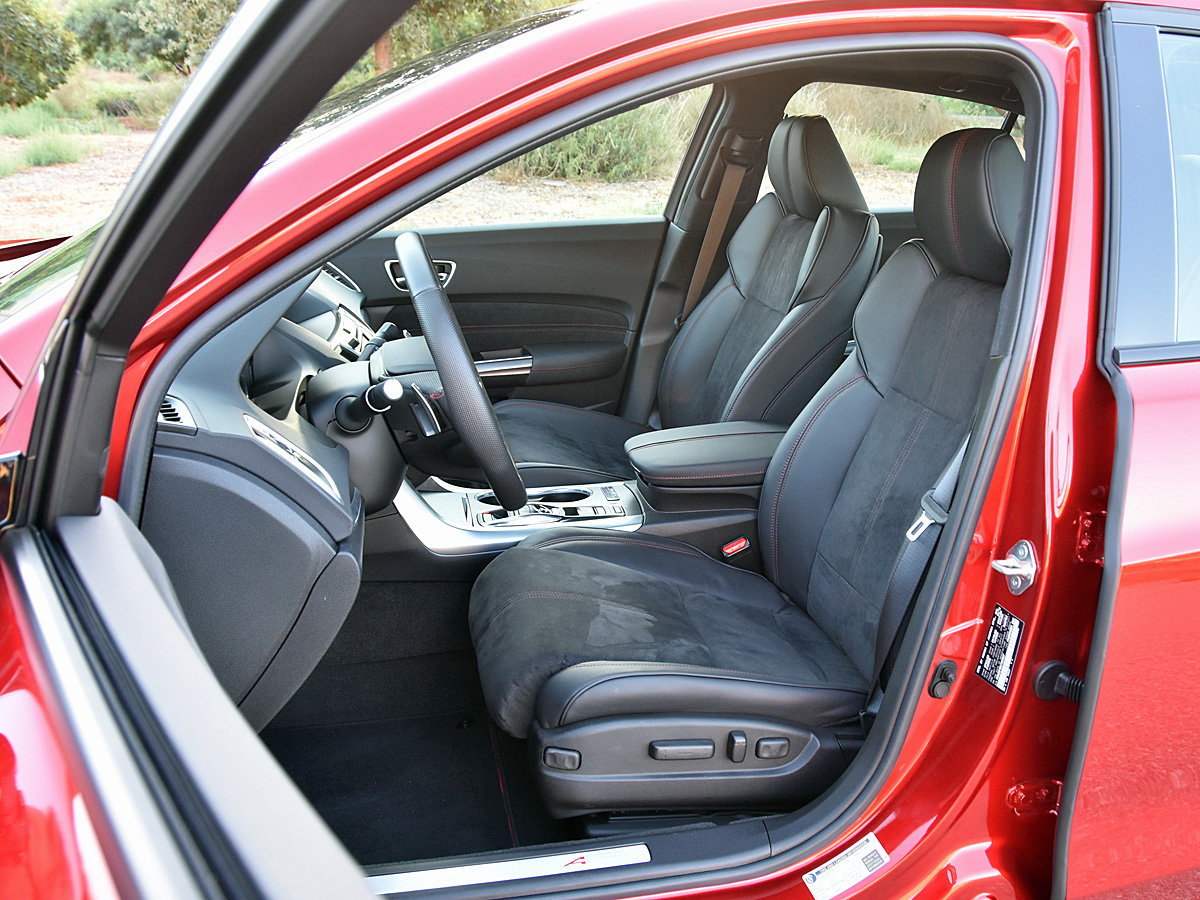 Since the average driver is unlikely to explore the TLX SH-AWD’s performance capabilities on a regular basis, it’s important a car like this one exudes quality and coddles its passengers with comfort. A loaded TLX does that, convincingly.

From the materials used within the cabin to the outstanding front seats, this Acura is a compelling companion for the daily drive. Supple leather, perfect positioning, heated and ventilated seats, and plenty of room greet the driver and front passenger.

Storage space is generous in frequency if not size. The trunk isn’t spacious, either, measuring just 14.3 cubic feet. That’s compact-car territory, not midsize. 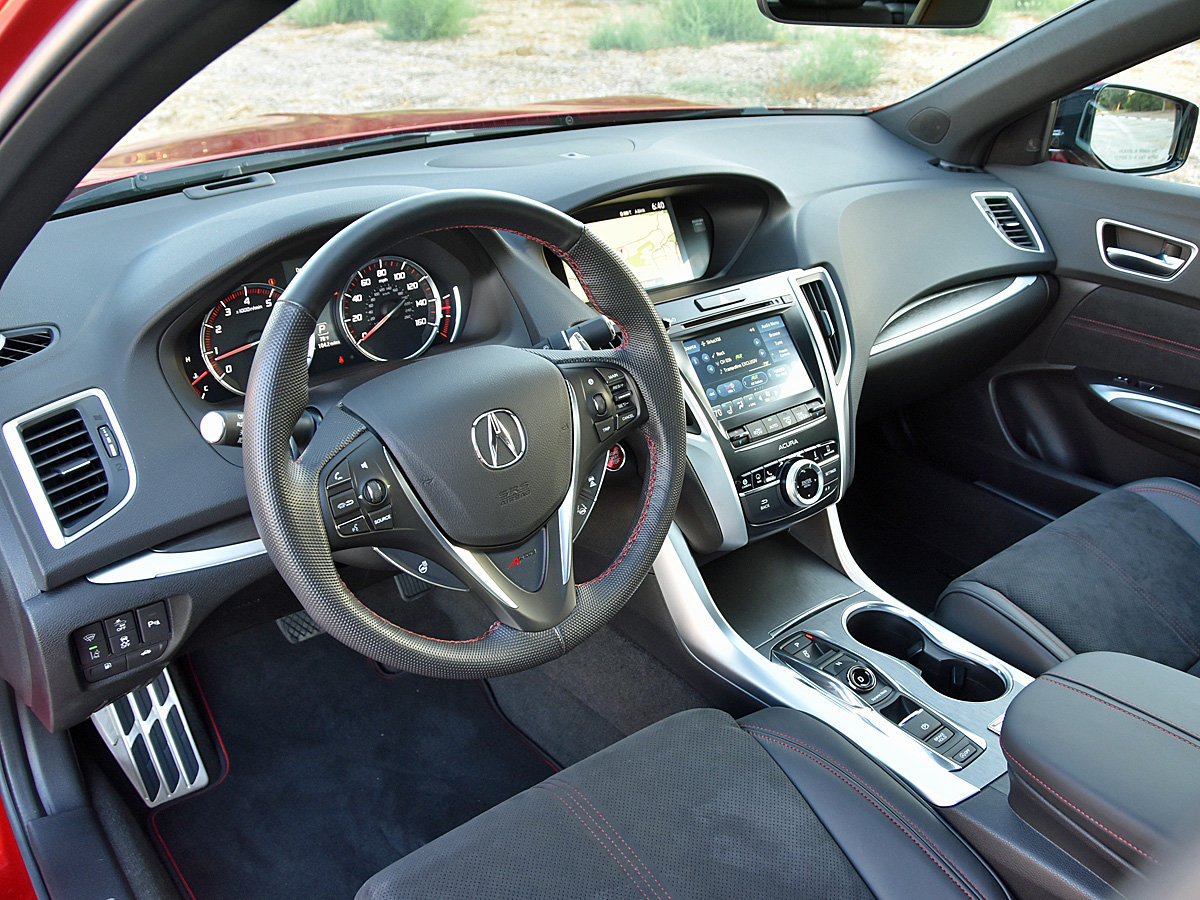 Ugh. Acura can’t rid itself of its dual screens soon enough. Where Acura has lost its way isn’t with regard to driving dynamics. The company, once a master of ergonomics, flunked Dashboard Design 101 when it comes to the TLX’s infotainment system layout.

The redesigned RDX got what other Acuras will soon have: a widescreen static display and a trackpad on which you use your fingertip to execute commands. Normally, I can’t stand touch-sensing, haptic-feedback touchpads, and George Kennedy agrees in his review of the 2019 RDX. But anything is better than what the TLX currently has.

What’s the big deal? The top display is not a touchscreen, but the bottom display is. A row of climate control buttons and switches resides under the bottom screen, but some climate functions are included on the bottom portion of the touchscreen. Below those, you’ll find buttons and a knob that operate the top screen, some covered in a glossy coating that makes them nearly impossible to read.

Beyond these foibles, there is a stereo volume/power knob, but not a corresponding tuning knob. The navigation map's graphics are yesterday's tech. The voice-recognition system isn’t up to snuff, either, causing more frustration than it’s worth.

Wait, I’m not done. When you’re driving, you need to remember which screen conveys what information, and then how to use that screen. Reach for the bottom display to select a different radio station, hit a bump, and you might accidentally activate the seat heaters instead. That’s lovely when it's almost 100 degrees outside.

This infotainment setup causes both distraction and frustration, irritating me to the point that I think a trackpad design is an improvement. But I will say this: The Acura/ELS premium audio system sounds pretty good. I also liked the smartphone charger Acura installs in the bin forward of the shifter and cup holders. And the car has Apple CarPlay and Android Auto. 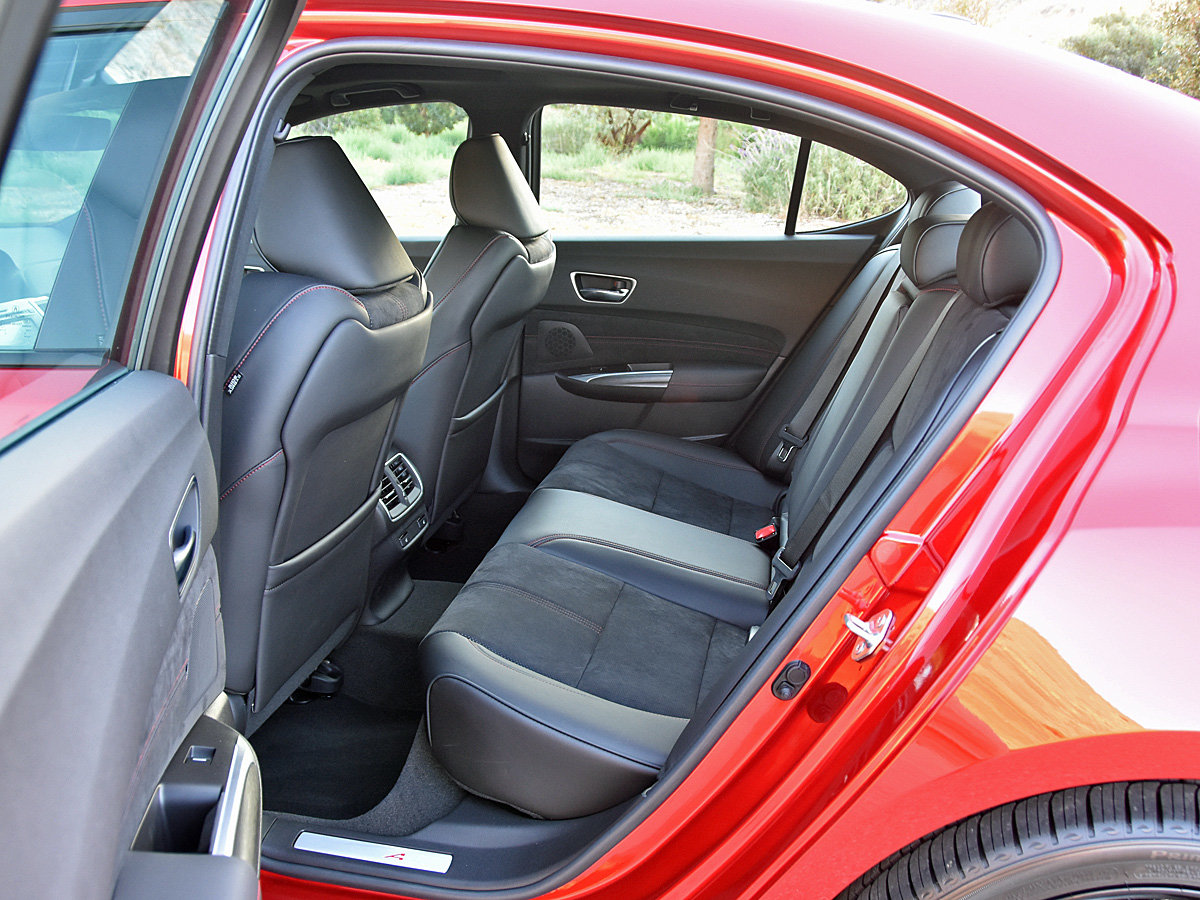 Now that my primary complaint about the TLX is out of the way, let’s address the car’s aging vehicle architecture and advanced driver assistance systems (ADAS).

Designed and engineered in the early teens, the TLX is getting old, and that’s reflected in its Insurance Institute for Highway Safety (IIHS) crash-test ratings. It doesn’t qualify for a Top Safety Pick due to an Acceptable rather than Good result in the small overlap frontal-impact test on the driver’s side.

On a positive note, however, the TLX does earn 5-star ratings in every test conducted by the National Highway Traffic Safety Administration (NHTSA), including the rollover test.

To help prevent a crash from occurring in the first place, every TLX has adaptive cruise control, forward-collision warning, automatic emergency braking, lane-keeping assist, and road-departure mitigation systems. A blind-spot monitoring system with rear cross-traffic alert is included on all but the base TLX with no option packages.

While these technologies are effective, they lack smoothness, refinement, and sophistication in comparison to more modern vehicles from both mainstream and luxury brands.

For example, when the adaptive cruise control is set and attempting to maintain the desired following distance from vehicles ahead, the driver is constantly aware of the brakes pulsing or the engine accelerating. And if another vehicle tucks into the gap ahead, get ready for some braking, whether it’s warranted or not.

The lane-departure-warning system doesn’t beep, but it doesn’t vibrate the steering wheel, either. Instead, it wobbles the steering wheel in an exaggerated manner. While preferable to incessant beeping, it's not as subtle as a vibration.

Frankly, I found the car more pleasing to drive without the militant adaptive cruise control or steering-wheel-wobbling lane-departure-warning systems engaged. 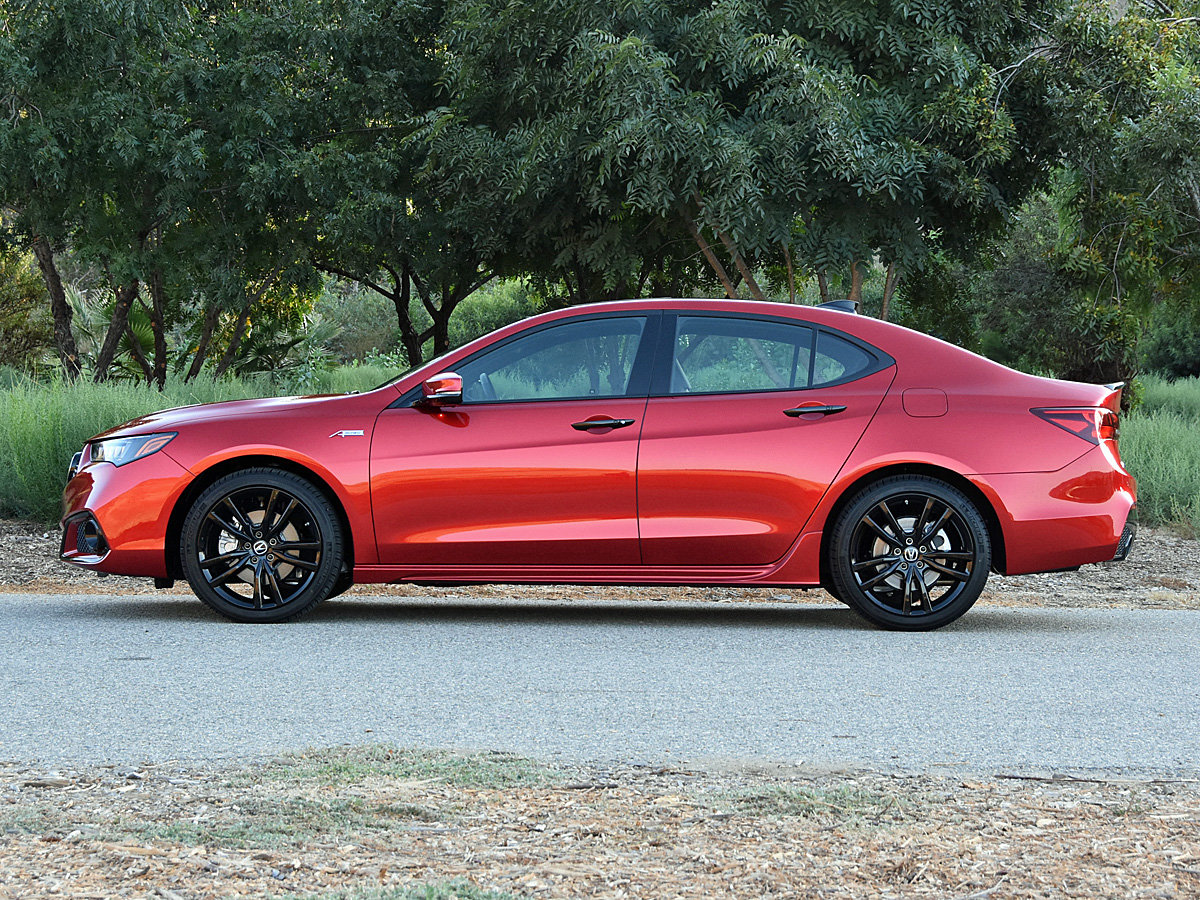 The Acura TLX is a bit of a "tweener." By that, I mean it overlaps smaller and more basic cars in terms of its base price but also provides far more value than slightly larger and more opulent cars when fully loaded. And because of that market positioning, it is a truly cost-effective way to own a luxury sedan.

Furthermore, Acura regularly offers discounted lease deals on the TLX, and as the company prepares to replace this current version of the car with something approximating (fingers crossed) the sensational Type S Concept that the automaker rolled out for the Concours d’ Elegance in Pebble Beach in August 2019, it will no doubt discount the 2020 model through low payments, favorable terms, and other incentives designed to move the metal.

Should such deals entice you, know that while the car’s design is somewhat dull, some ADAS behavior is aggravating, and the infotainment system is downright infuriating, the rest of the TLX is easy enough to like. And with more aggressive A-Spec trim, the sonorous V6 engine, the sophisticated SH-AWD system, and the right kind of road, you might even love the TLX.

As for the TLX PMC Edition, with its nano-pigment radioactive glow, it serves as the approach to the apex at which Acura will likely rediscover what makes it tick. With the TLX, and the TL that preceded it, a degree of performance has always been present. But now, the company’s personality is going to start shining brightly once again.

GuruKBG8V What dwould you prefer,, the 2020 Acura tlx or 2020 camry se with safety pakage?

Have you driven a 2020 Acura TLX?
Rank This Car

Hi. I have a 2020 Acura TLX and my trunk doesn't open. I used the key, button and button inside the car. What else can I do to open the trunk? Please advise.

How Can I Find My Listing And Edit The Listing

i need to find my listing and edit it . could not find any tap to help me to go back to my listing and check it out . also when is the listing expired

I Have Paid For The Listing . I Cannot Find My Car To Edit Information

how can i log in . i paid for the listing and i cannot find my car