Looking for a Used Jetta GLI in your area?

An everyday car for enthusiasts, the Jetta GLI is a sedan version of the GTI hatch packing more room and a lower price. 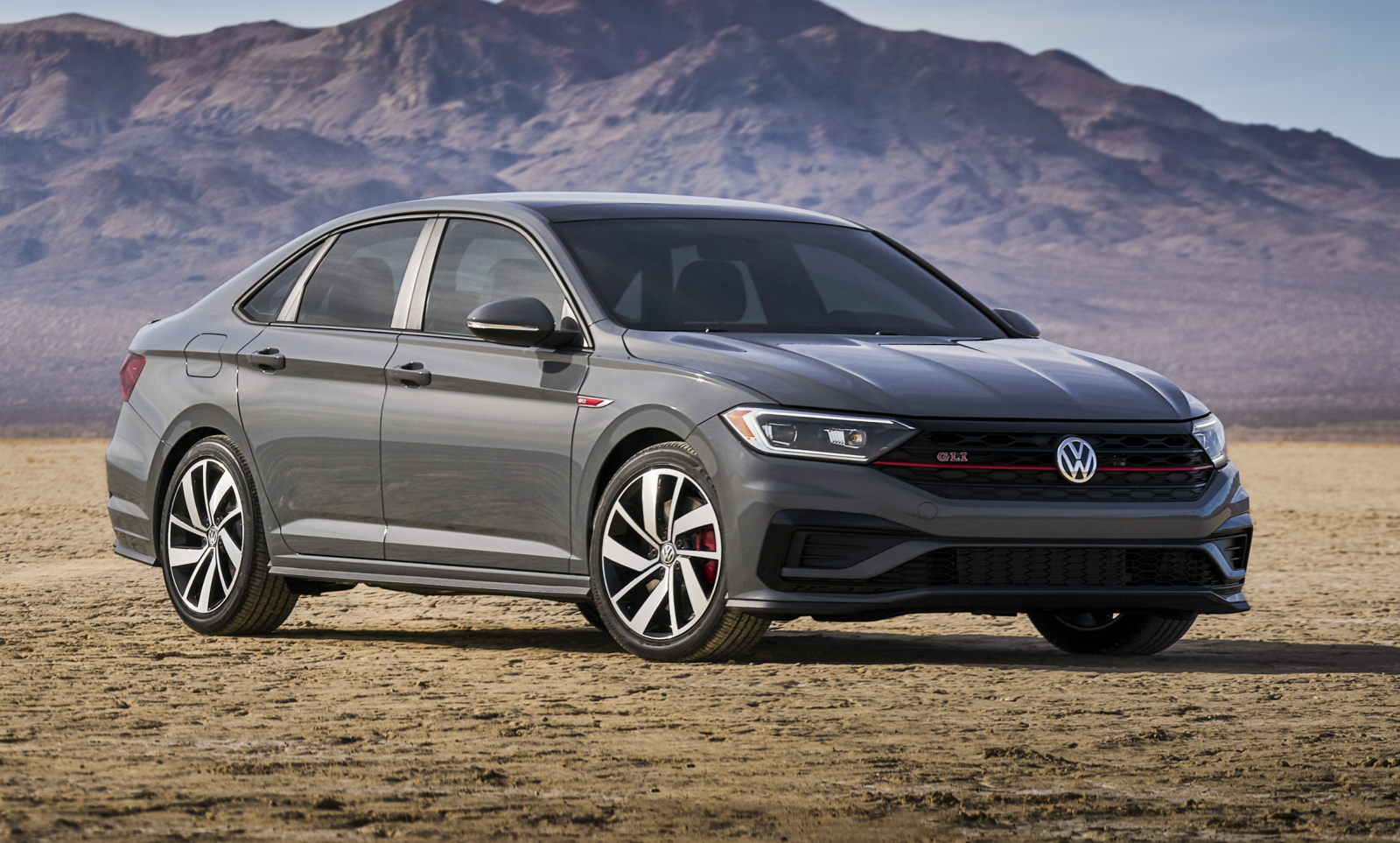 Volkswagen settled on a basic formula in the 1980s: Take a popular economy car and hot-rod it without dramatically increasing price or fuel consumption. The result was a hopped-up Rabbit hatchback dubbed the GTI in 1983. A year later, VW imported the larger, 4-door GLI as the performance version of the Jetta sedan. Thirty-five years on, the all-new 2019 Volkswagen Jetta GLI is more affordable now than it was back then. Yes, this car costs thousands more to start than a base Jetta—but it's worth the money if sharp handling, strong acceleration, and subtle styling tweaks mean something to you. They sure do to me. 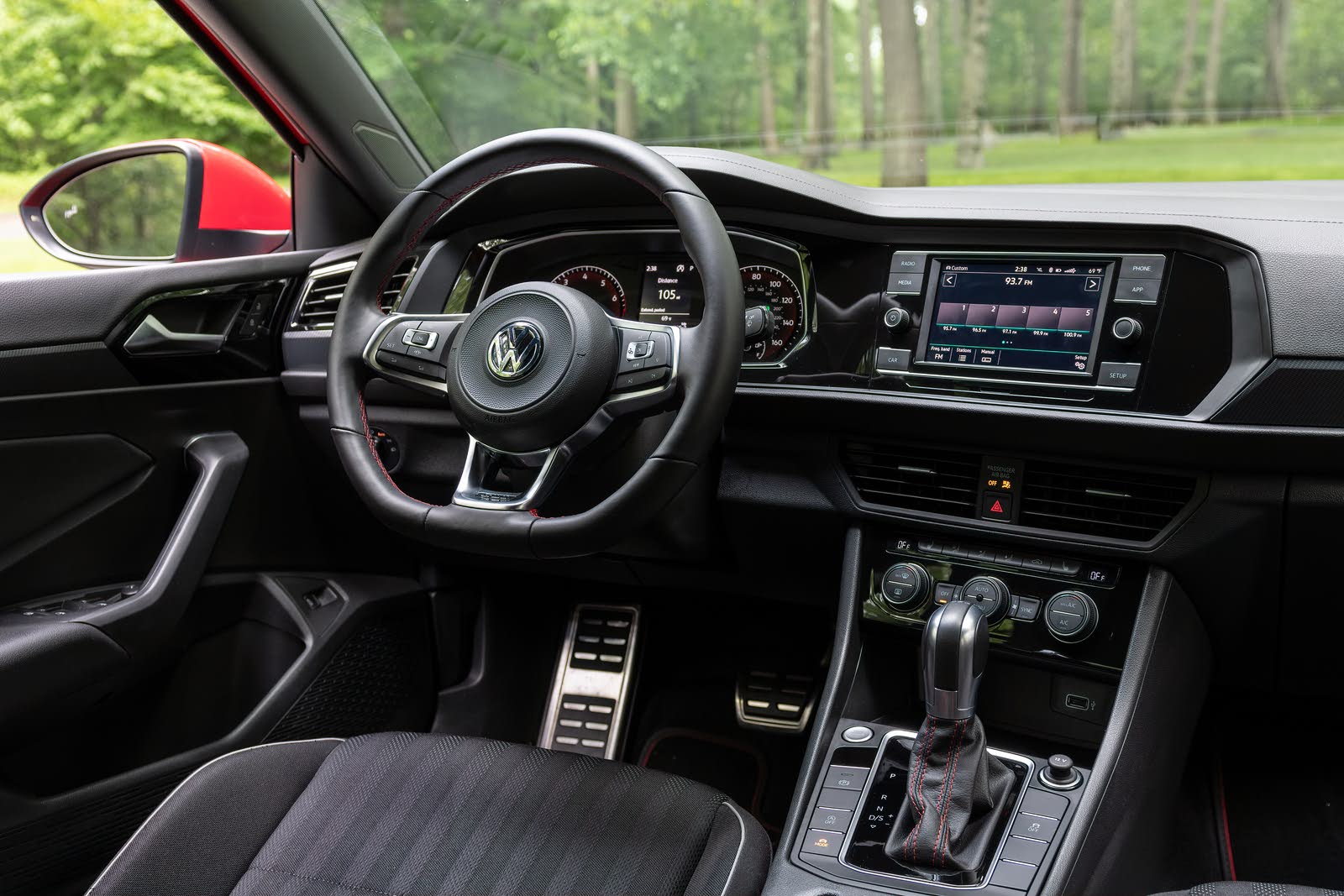 Small clues distinguish the GLI from a regular Jetta. For one, the GLI has no "Jetta" markings anywhere. Red GLI badges decorate the grille, fenders, and trunk. A thin red line connecting the lower portions of each headlight divides the grille, which sports a black mesh pattern instead of horizontal chrome bars. Polished black trim connects the top of the headlights at the hood and extends to the lower air intakes. Matte black trim wraps from the front chin spoiler, along the side sills, and to the rear valence, which features two separate exhaust tips instead of the trapezoidal outlets integrated within a standard Jetta's bumper. Red brake calipers and unique two-tone 18-inch wheels complement this sedan's upscale stance. The GLI has the crisp lines and simple surface finishes of the smaller Audi A3 (with which shares its chassis). It's more handsome than an A3 but not as svelte as the GTI. Blame the GLI's long overhang off its back wheels; that's a plus for trunk space, not style.

The all-business, all-black interior is a Volkswagen trademark. Materials, fit, and finish are very good for a car priced in the mid-$20,000 range. Even the harder plastic on the lower dashboard is dressed up in a fine grain. The cloth seats come with a tasteful stripe pattern, gray piping, and red stitching, but they lose major points for not featuring the GTI's famous tartan inserts. Still, the cloth is good enough that you'll never miss the optional leather. Too bad black is the only color available.

The GLI's flat-bottom steering wheel is its finest touch. It feels thick, soft, and delightfully old-school with its small hub and the shiny VW logo. So are the analog gauges with the red needles. They're simple and timeless, as are the climate-control knobs and the center stack angled several degrees toward the driver. Everything is illuminated (in red, of course) with the option to choose between 10 ambient lighting accents (they also change color automatically, if you desire, when switching driving modes). Switches, stalks, knobs, the damped sound of the doors—they all feel lifted from a $50,000 Audi... because they are. The aluminum trim on the gearshift lever and pedals keep the GLI from feeling too stoic. What doesn't help is the sorry central screen in the instrument panel, which features jagged white type, the likes of which I haven't seen since I owned a Nokia. 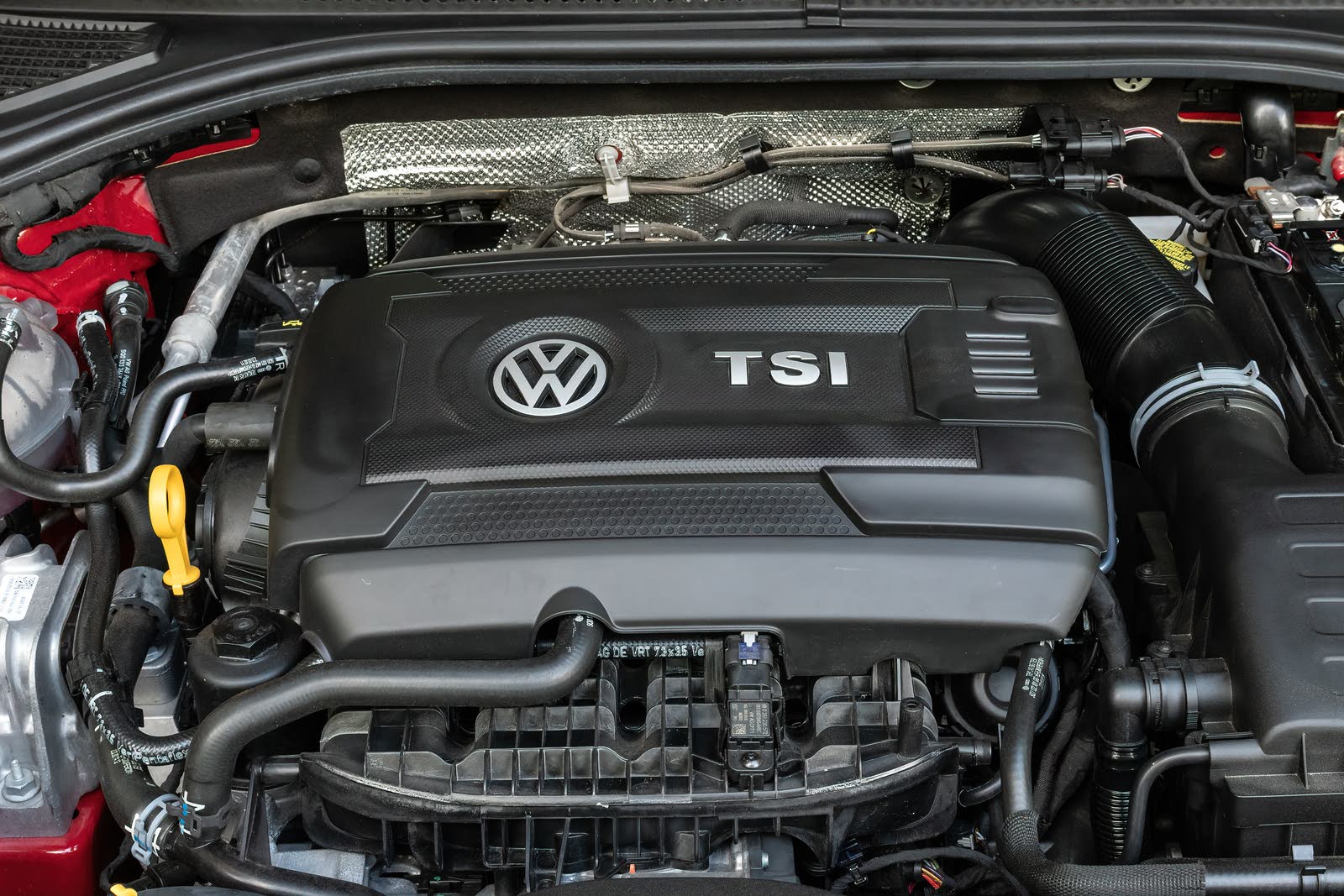 Performance separates the GLI from the 1.4-liter engines and torsion-beam rear suspensions of a basic Jetta. The hardware upgrades are real, and all are noticeable on a nice open road. The turbocharged 2.0-liter inline 4-cylinder engine makes 228 horsepower and 258 pound-feet of torque—exactly what you'll get in an A3, a four-door John Cooper Works MINI, or a BMW X1, all of which cost $10,000 more. A 6-speed manual comes standard (hooray!), and my car's DSG 7-speed dual-clutch automatic is an $800 option I didn't want. It's not as smooth as the Jetta's traditional 8-speed automatic because the DSG slips its clutch off the line like a manual, only you have no control over the clutch. Sometimes, it hesitates and becomes jerky at low speeds. It also lugs the engine in higher gears at moderate speeds, which exacerbates the engine's turbo lag. Get the manual, save money, and keep the revs where you want them.

Managing revs is so critical in a car like the GLI because its front-wheel-drive (FWD) transaxle can handle all the engine's power, even in the tightest of turns. Volkswagen's mechanical limited-slip differential, called VAQ, uses a pack of clutches to moderate torque from side to side. In the most extreme case, it can route 100% of the engine's output to one wheel. Unlike most conventional torque-vectoring systems, the GLI doesn't apply the brakes to alter the car's trajectory, so the pads won't wear prematurely (and these larger brakes from the GTI have a great initial bite). The feeling, helped by summer Hankook tires and communicative steering, is that of immediate turn-in and seamless corner exits. You can stay on the power without invoking the stability control as if the GLI were an all-wheel-drive (AWD) car. Paired with a multi-link suspension and retuned dampers, the GLI charges into curves while gliding over poor road surfaces. Adaptive dampers are optional and, in my opinion, totally unnecessary when the standard setup is this good.

Driving modes (Eco, Normal, Sport, and Custom) alter the response of the throttle, transmission, VAQ axle, steering, dampers, and engine sound. I enjoyed cranking up these settings, but the engine sound is obviously fake. While rear passengers won't notice, because it's piped through the front speakers closest to the driver, the engine's low frequencies sound unnatural and excessive. It'd be one thing if the GLI's natural intake and exhaust sounded like heaven, but they don't. The Custom mode lets you drive to the sportiest max in all settings while muffling the noise.

Driven straight, the GLI feels rock-solid as speeds increase, like any German car. When the scenery really blurs, the DSG automatic is fast and perfectly smooth, up or down the gears. It's just not my preference in a chassis this willing and a powertrain this strong. Score points for VW for giving drivers a choice.

Fuel economy is EPA-rated at 25 mpg city, 32 highway, and 27 combined for either transmission. That's down considerably from the Jetta's 30/40/34 rating. I averaged about 28 and never felt shortchanged given the experience I had. 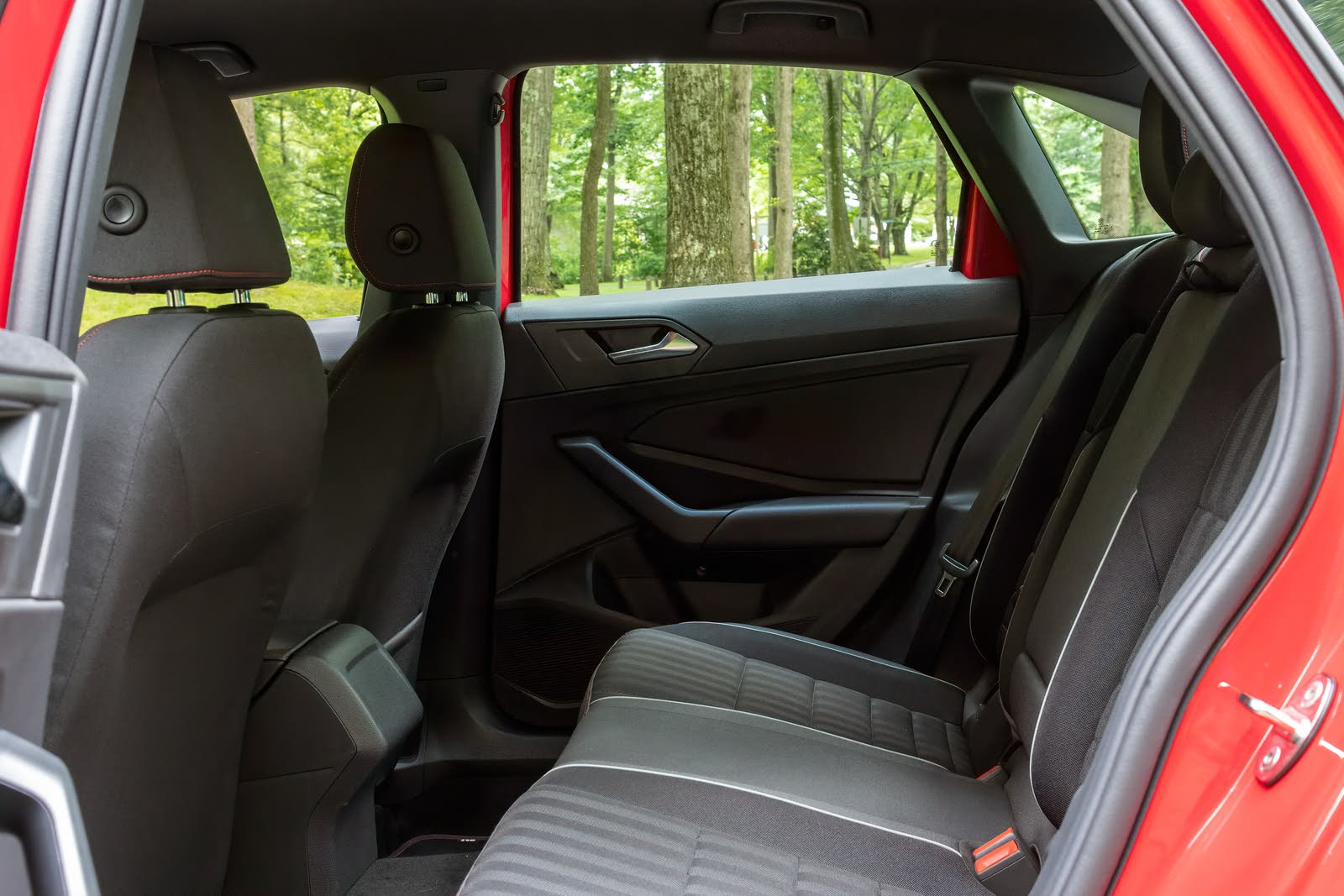 Like the regular Jetta, the GLI excels in everyday tasks. It's easy to get in and out of the car. It's roomy, particularly in the backseat, in every dimension. The Jetta may have started life as a compact sedan, but it doesn't feel like one today. It's got space, space, and more space. A road trip with four adults would be no issue in the GLI. The trunk is cavernous and looks way deeper than its 14.1-cubic-foot measurement suggests. Controls are logical and positioned where your hands would naturally fall.

The touchscreen is fast, and it's easy to operate the stereo and various vehicle settings. But be warned, you can't adjust minor things like the bass without coming to a full stop. A message pops up that prevents the driver (or passenger) from doing anything but looking at the radio or the GLI's efficiency monitors. I appreciate VW's gesture to curb distractions, yet this seems to go too far. Also annoying are the tiny side-view mirrors. While changing lanes, I saw more of the mirror housings' red paint than I did the actual mirrors. It's possible to make sleek mirrors without compromising on visibility. This is the GLI's biggest misstep. Make the best of it, and the GLI is otherwise a friendly car that is easy to learn and operate on a daily basis. 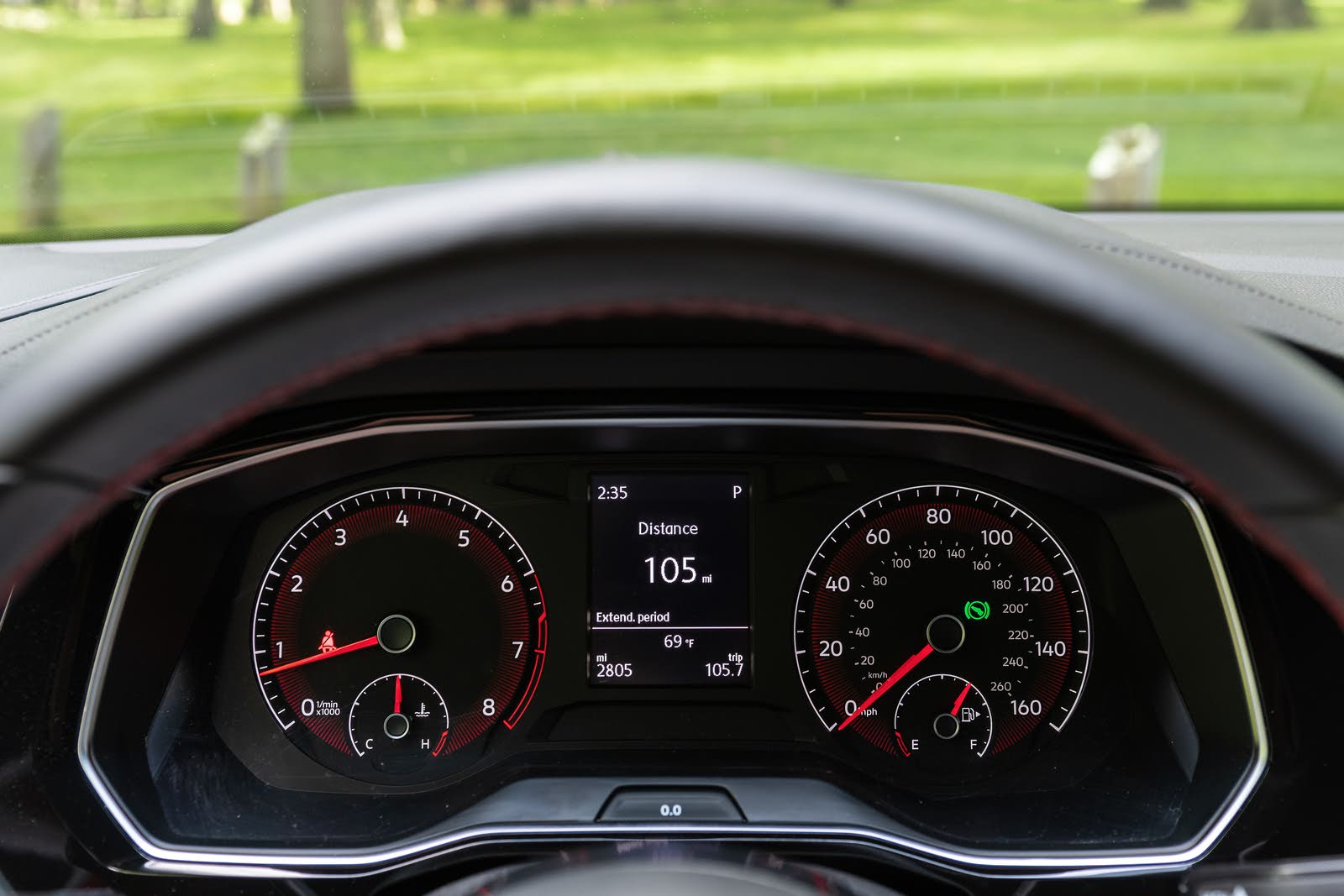 Navigation on the higher-resolution, 8-inch touchscreen is restricted to the top Autobahn trim, which I didn't have available for my test. So is the digital instrument panel, called Volkswagen Digital Cockpit, which replaces the gauges with a high-res widescreen featuring customizable graphics and full-screen maps. That's impressive, but it's not even available as an option on lesser trims. However, Apple CarPlay and Android Auto come standard on all trims, as does VW Car-Net, which allows for vehicle tracking and remote locking.

But that's about as high-tech as the GLI gets. Lane-keep assist, adaptive cruise control, and auto high-beams aren't offered on the GLI like they are on the Jetta. On the 2019 Tiguan I drove after the GLI—also a base model without nav—I was impressed to see a much larger, crisper infotainment screen and a central display on the instrument panel that was the same size but with color and significantly higher-res type. The fact that the GLI is brand-new for 2019 and doesn't share these displays isn't a criminal offense, but it's sure disappointing. There are no USB ports in the back, either (and no air vents). It's a few thousand dollars extra to get those superior screens, a sunroof, power ventilated seats, and an upgraded Beats Audio stereo. At least the GLI's LED headlights, heated front seats, and keyless entry come standard. 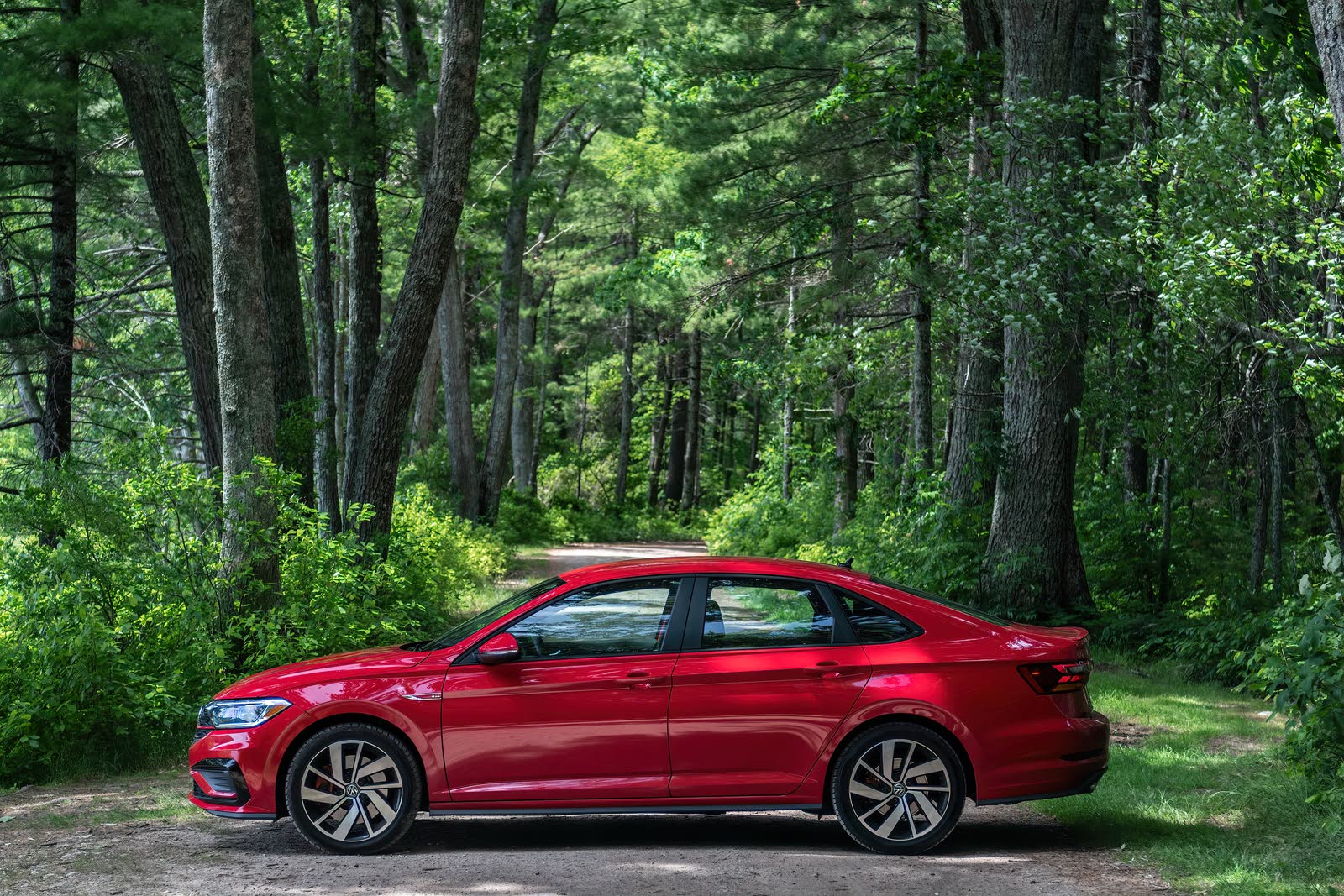 The 2019 Jetta, which is structurally identical to the GLI, scored five stars overall from the National Highway Traffic Safety Administration (NHTSA) but earned only four stars in both driver and passenger frontal crash ratings. The Jetta also scored top Good ratings from the Insurance Institute for Highway Safety (IIHS) in all crash tests and the best Superior rating for its standard forward emergency braking, though its lower-rated headlights mean it cannot qualify for a Top Safety Pick. In addition, blind-spot monitoring comes standard. Knee airbags are not offered. 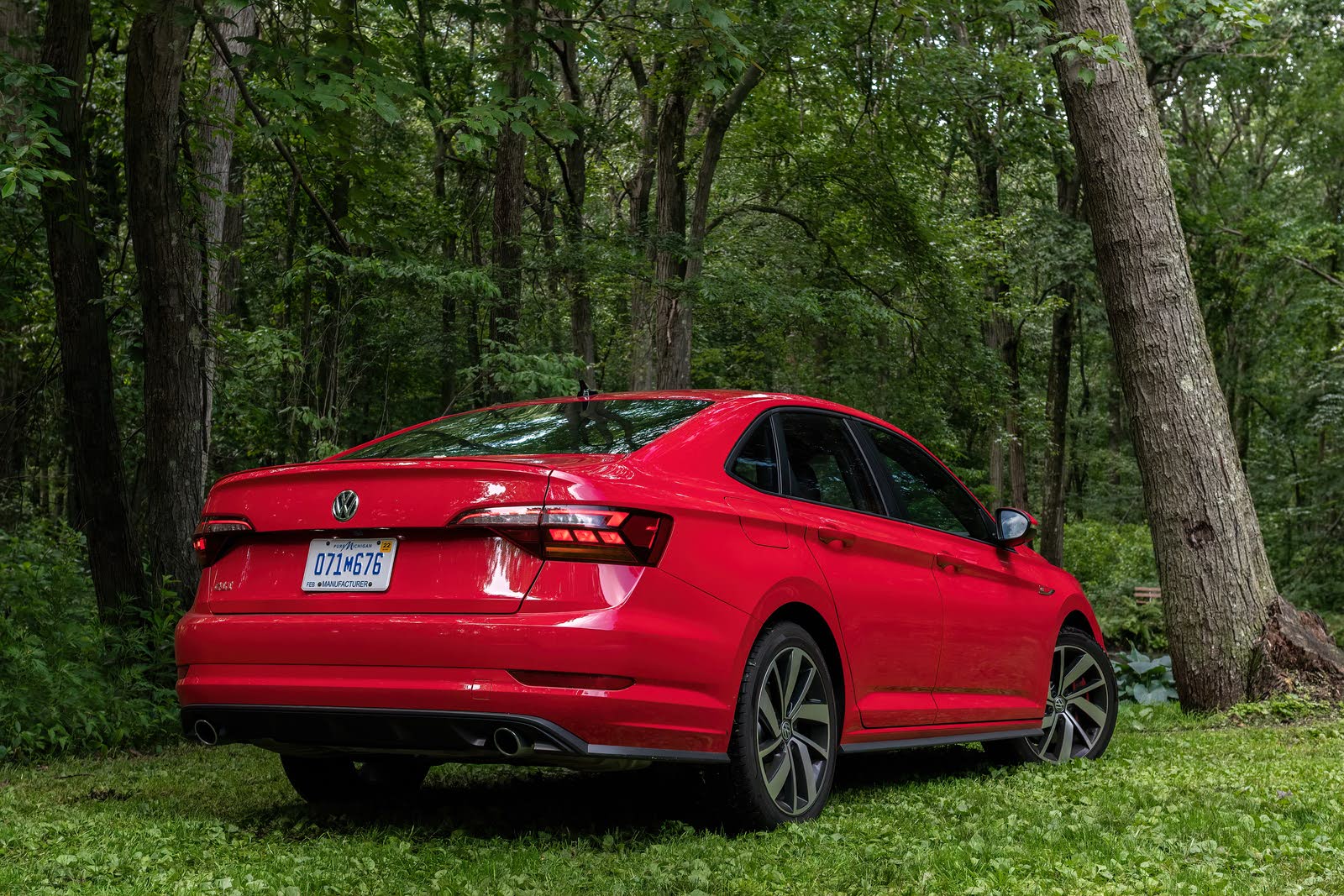 Despite its relatively poor screens and lack of innovative tech, I felt the GLI gave me a ton of car for the money. I tested the base S, which starts at $25,995. This is the CarGurus recommended trim, with no options. With the $800 DSG automatic and an $895 destination fee, my car totaled $27,690. The 35th Anniversary Edition, for the 2019 model year only, adds adaptive dampers with black wheels for $1,000 more than the S. The loaded Autobahn costs $29,195. By comparison, the Golf GTI is a couple thousand more and gets very pricey—think 36 grand—for its Autobahn trim.

Thanks to the sheer utility of a roomy 4-door sedan, style inside and out that looks and feels expensive, and performance that undoes all the expectations of a cheaper front-wheel-drive car, the GLI is a winner. A manual transmission is standard—a rarity for any car, even among sports cars like the BMW Z4—and VW's 6-year, 72,000-mile warranty leads the industry in bumper-to-bumper coverage. VW's old slogan, "Drivers Wanted," applies to the GLI. It's for a subset of compact sedan buyers who want more performance without paying too much.

What's your take on the 2019 Volkswagen Jetta GLI?

Chris Glad you liked it, Clifford! My 35th DSG puts a smile on my face just driving to work! I owned a mk5 GTI, and this car gives nothing up to the GTI in terms of fun. Well, maybe the electric parking brake! ;-)

Have you driven a 2019 Volkswagen Jetta GLI?
Rank This Car

Looking for a Used Jetta GLI in your area?

Can You Ship To Germany?

Looking for a car to ferry a wife and kid, would you recommend GTI over GLI if performance is one of the key criteria ? The boot space b/w the 2 said cars is not very clear by the specifications.

Do The Prices You Show Include Destination Fees?