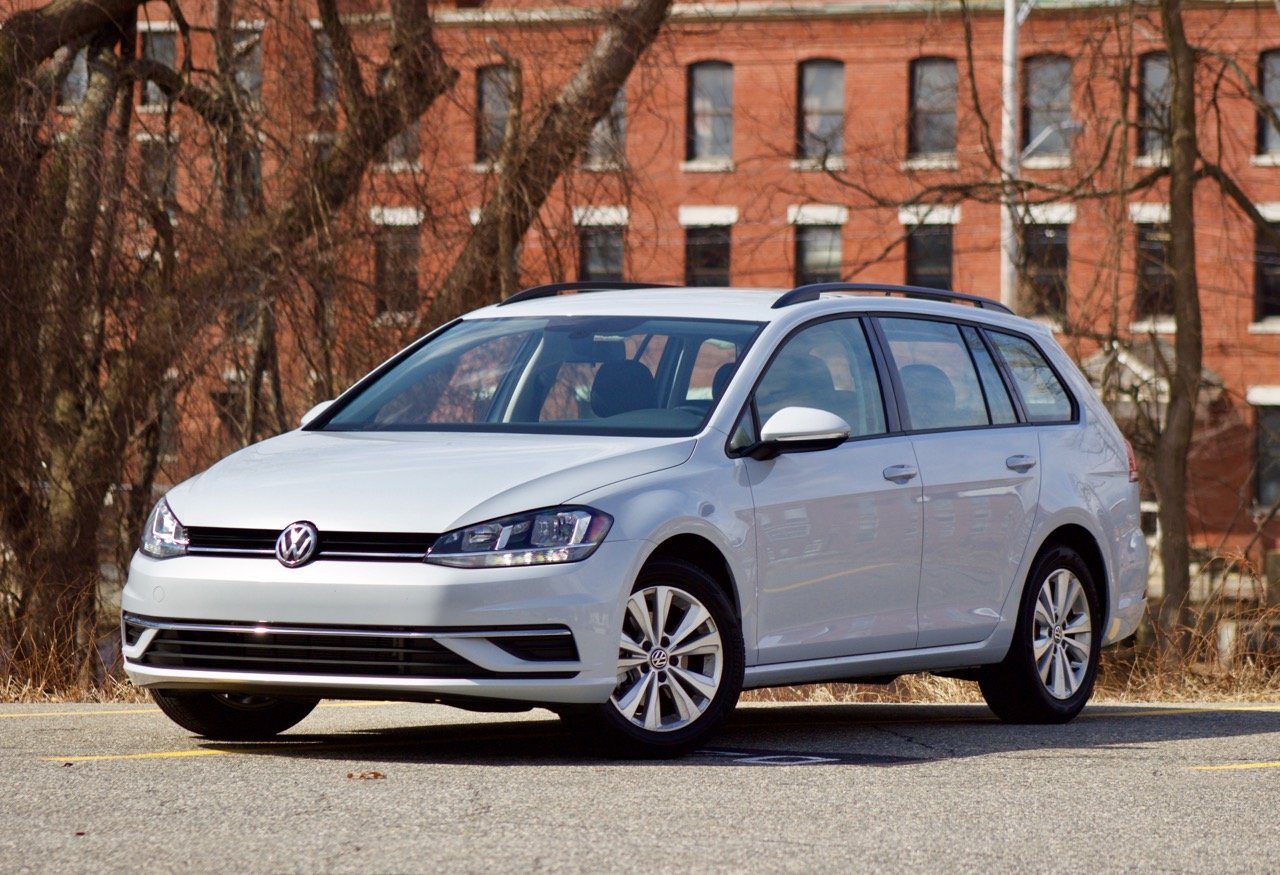 What defines a “Sport Utility Vehicle”? Common knowledge dictates what an SUV is supposed to look like, but SUVs and crossovers don't hold a monopoly on the vehicular attribute of utility. Case in point: the station wagon.

Truthfully, most modern crossovers are just high-riding wagons and hatchbacks. The only real advantages they offer are a higher ride height, higher seating position, and all-wheel drive (and even that isn’t always a given). Cars like the Nissan Kicks and Toyota C-HR are available with only front-wheel-drive, and when compared to a vehicle like the 2019 Volkswagen Golf SportWagen, you have to wonder what added utility those cars really offer.

VW calls the SportWagen the “Sportier Utility Vehicle.” It's hard to argue with that point, and the SportWagen is a serious alternative to your typical crossover—especially if you care about driving dynamics. 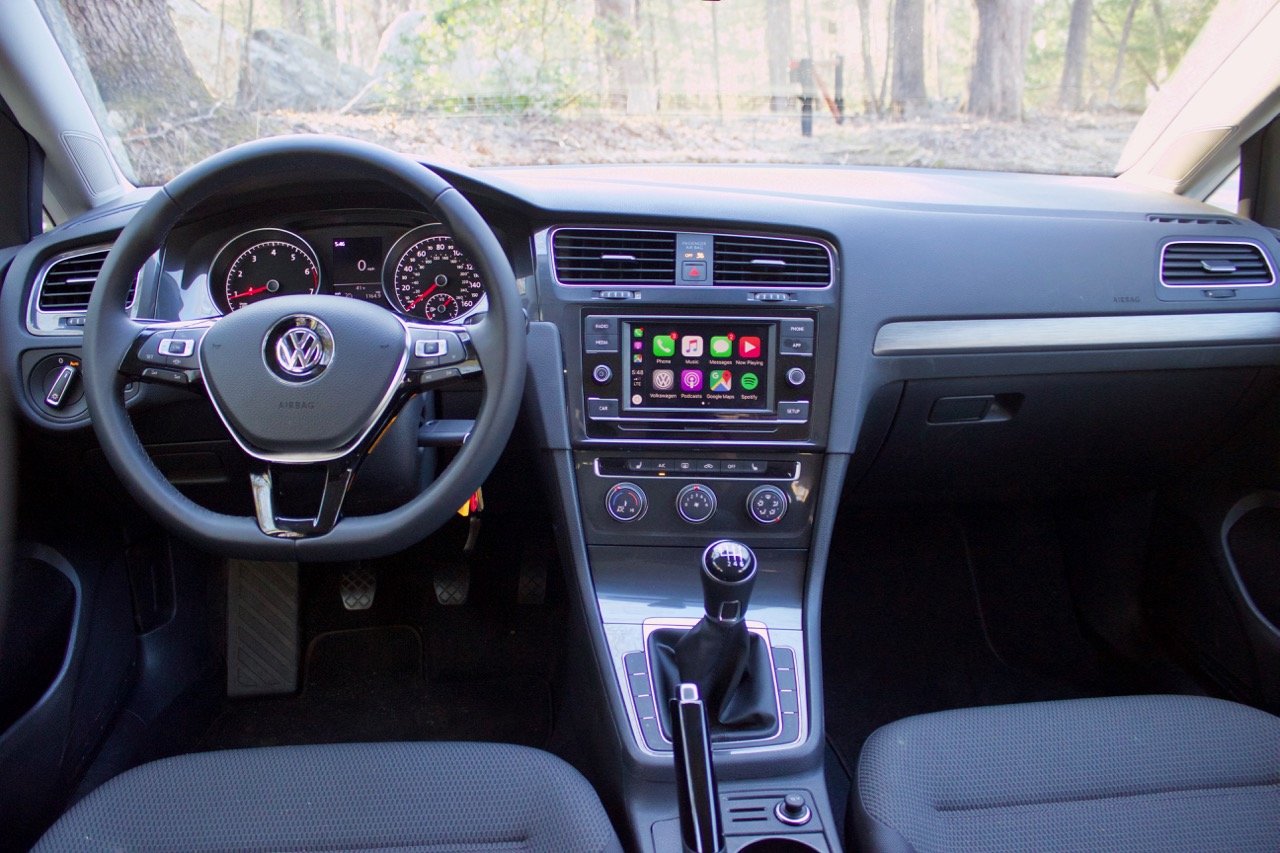 The Golf SportWagen’s styling is confidently understated. It’s a refreshingly plain car, especially in White Silver Metallic, which looks almost like primer with a clear coat. That’s not to say the SportWagen is cheap or spartan—far from it, actually. This station wagon is incredibly refined and even upscale in some respects.

Perhaps the public's attraction to crossovers stems from their design, but the straight lines of the SportWagen have a modern appeal to them. It’s everything you love about the Golf, just more of it.

Inside, the SportWagen's simple-but-upscale ethos continues. The center console and dash have fairly straight lines, and in the right hues, they look like they could be from an Ikea furniture catalog. The center console itself is slightly angled to the left, providing a driver-focused cockpit. There are still hard plastics in many places, but the cabin manages to still feel upscale.

You can choose from two trims of the 2019 Golf SportWagen: S and SE, which is one trim fewer than last year. Volkswagen no longer offers the high-end SEL trim for 2019.

The base S trim comes very well equipped, with 16-inch alloy wheels, heated power-folding side mirrors, a leather-wrapped steering wheel, black roof rails, LED taillights, and LED daytime running lights. It also comes standard with one-touch up/down power windows for all four windows. This is something automakers love to skimp on, where only the driver’s window is one-touch, or it’s only one-touch down, but not up. Those other automakers should take note: VW's Golf SportWagen is how you make an entry-level car without skimping on the little things.

As base trims go, the S is incredibly well-equipped, but there are some areas where you'll want to say, “You get what you pay for.” For one, the rear and side windows are not tinted at all. This may seem like something small, but tinted windows help prevent prying eyes from seeing into the rear of the car. Sure, VW provides a privacy roller, but what if you have a large item or just don’t want to use the clunky roller?

Before stepping up to the SE trim, opting for the S 4Motion all-wheel-drive (AWD) trim actually brings in some additional features. It adds heated front washer nozzles and heated front seats, basically tossing in a few cold-weather items for AWD buyers.

Also, the SE costs about $8,000 more than the base S trim. For the best combination of capability and quality, CarGurus recommends the S 4Motion trim that we tested. 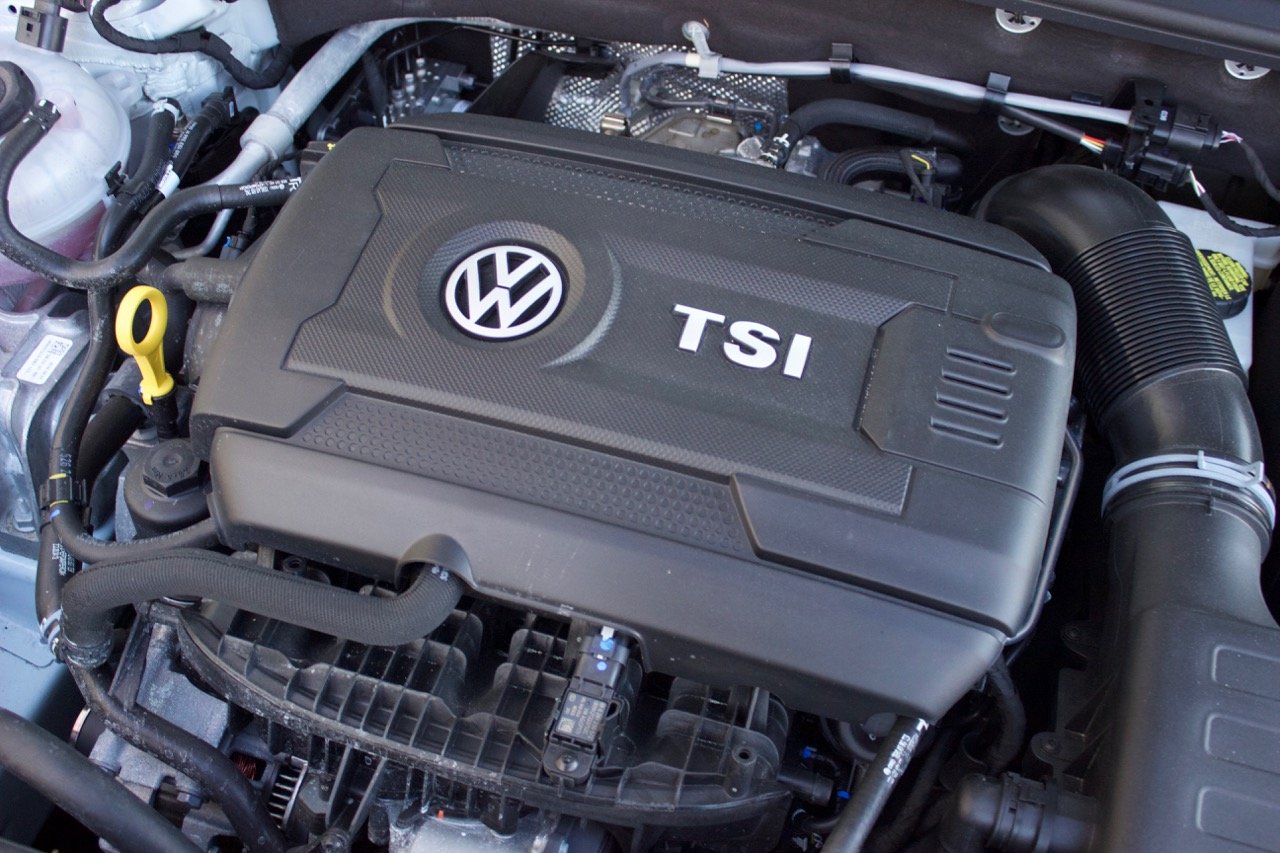 The front-wheel-drive (FWD) S and SE trims of the 2019 Golf SportWagen use a new base engine. It’s a 1.4-liter turbocharged 4-cylinder engine, making 147 horsepower and 184 pound-feet of torque. We drove this engine in the new Volkswagen Jetta, and while that’s a different car, it did offer some insight into this new engine's pickup and power. In short, there wasn’t much to be found. This engine is fine (if not thrilling) and comes paired to either a 6-speed manual or an automatic transmission.

We drove the S trim with 4Motion AWD, equipped with the previously standard engine: a 1.8-liter turbocharged 4-cylinder unit, making 168 hp and 199 lb-ft of torque. It comes with Volkswagen’s DSG automatic gearbox or a 6-speed manual. Considering the added power of the 1.8-liter engine and the added capability of all-wheel drive, this is the powertrain CarGurus recommends.

Manual-transmission cars are fast becoming an endangered species. So the fact that you can get a wagon with a stick and AWD and it comes with only the more powerful engine is a small miracle. There’s a term for cars with this rare, almost-impossible combination. They're called “unicorns.”

Aside from its obvious novelty, the manual adds to the SportWagen’s throwback personality. Manual wagons are old-school, but the SportWagen's driving dynamics are far from it. The ride is refined in a way that is precise without being harsh or stiff. And the clutch pedal, though requiring minimal effort to depress, makes its catch-point evident. This would be a perfect car for teaching manual shifting.

Entering and exiting corners is a complete joy with the Golf SportWagen. The Mazda CX-5 and Ford Escape are among the rare SUVs that offer any athleticism, and they pale compared to the SportWagen.

The base 1.4-liter engine with the manual transmission is impressively efficient, returning 29 mpg city, 37 highway, 32 combined. With the automatic transmission, it returns 27, 36, 31.

The least-efficient version of the SportWagen is still pretty darned efficient. That would be the 1.8T with the automatic transmission, returning 22 mpg city, 29 highway, 24 combined. Our “unicorn” test model, which had the 1.8T and 6-speed manual, returned 22, 31, 25. In a week of combined city and highway driving, we observed average fuel economy of 24.3 mpg. 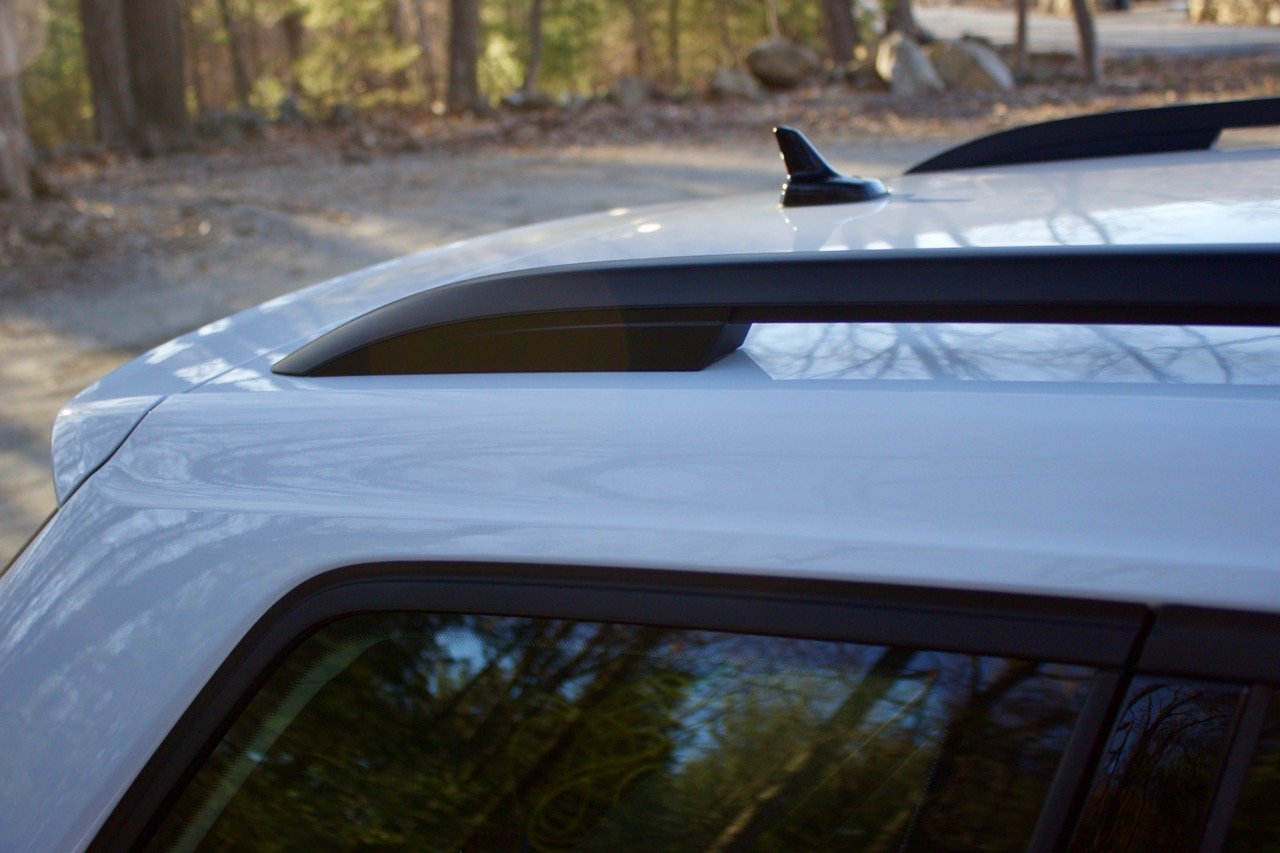 At 66.5 cubic feet with the rear seats down, the Golf SportWagen has more cargo space than a handful of small SUVs, including the Mazda CX-5, Kia Sportage, Hyundai Tucson, Chevrolet Equinox, GMC Terrain, and Jeep Cherokee. Even the ones that beat it on cargo space don’t beat it by much, and the straight lines of the wagon body style actually make it much easier to load large items, compared with more curved crossover designs.

The SportWagen also features standard roof rails that you can actually use. This might sound obvious, but check the roof rails on many other small SUVs—many are just mounting rails, with no space between the rail and the car to get a rope underneath. These features are just platforms on which to mount more expensive roof racks and cargo management systems.

Up in the passenger area, the SportWagen S covers the bases incredibly well, but presents another case of “You get what you pay for.” In the SportWagen, like some other Volkswagens, the front seats offer power recline, but the seats slide forward and backward manually, and the seat-height adjuster is manual, too. This is fine, I suppose, but it’s a weird letdown, realizing your seats are only partly power-adjustable.

Thankfully, the SportWagen's cabin is plenty useful. It has many deep cargo compartments and trays. The center console isn’t as deep or as large as you might expect, but it does have to fit around the AWD driveshaft tunnel. That tunnel continues to the second row, though it will get in the way only if someone is sitting in the middle seat. 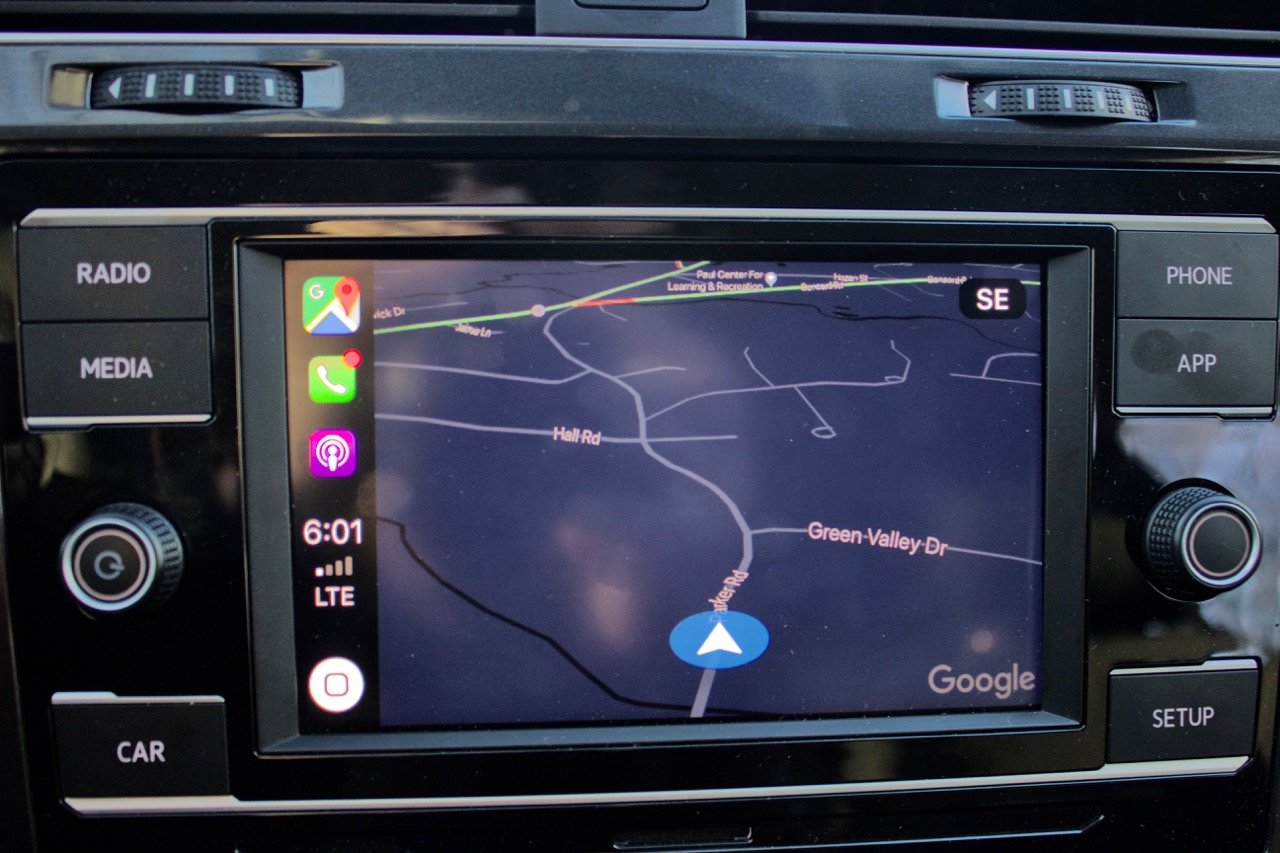 The Golf SportWagen comes standard with a 6.5-inch touchscreen infotainment system and one USB port. This is a great little system, and like many things in this car, it’s simple, straightforward, and well-executed. In addition to the crisp graphics and logical menu layouts, it has real buttons and dials. As we noted, it runs Apple CarPlay and Android Auto, meaning you don’t need to spend extra on a navigation system.

The SE swaps out the 6.5-inch screen for an upgraded 8-inch touchscreen infotainment system. Frankly, you’re better off with the base system. Why, you ask? Because the upgraded Composition Media system (the base version is called Composition Color) replaces the conventional buttons that flank the screen with touch-capacitive buttons. These are kind of like the buttons for your home microwave, but they are extremely sensitive. I’ve used this system in other Volkswagen products, and it's easy to inadvertently graze one of the buttons while trying to operate the touchscreen.

The SE trim also adds a 115-volt power outlet to the rear cargo area and an auto-dimming rear-view mirror. 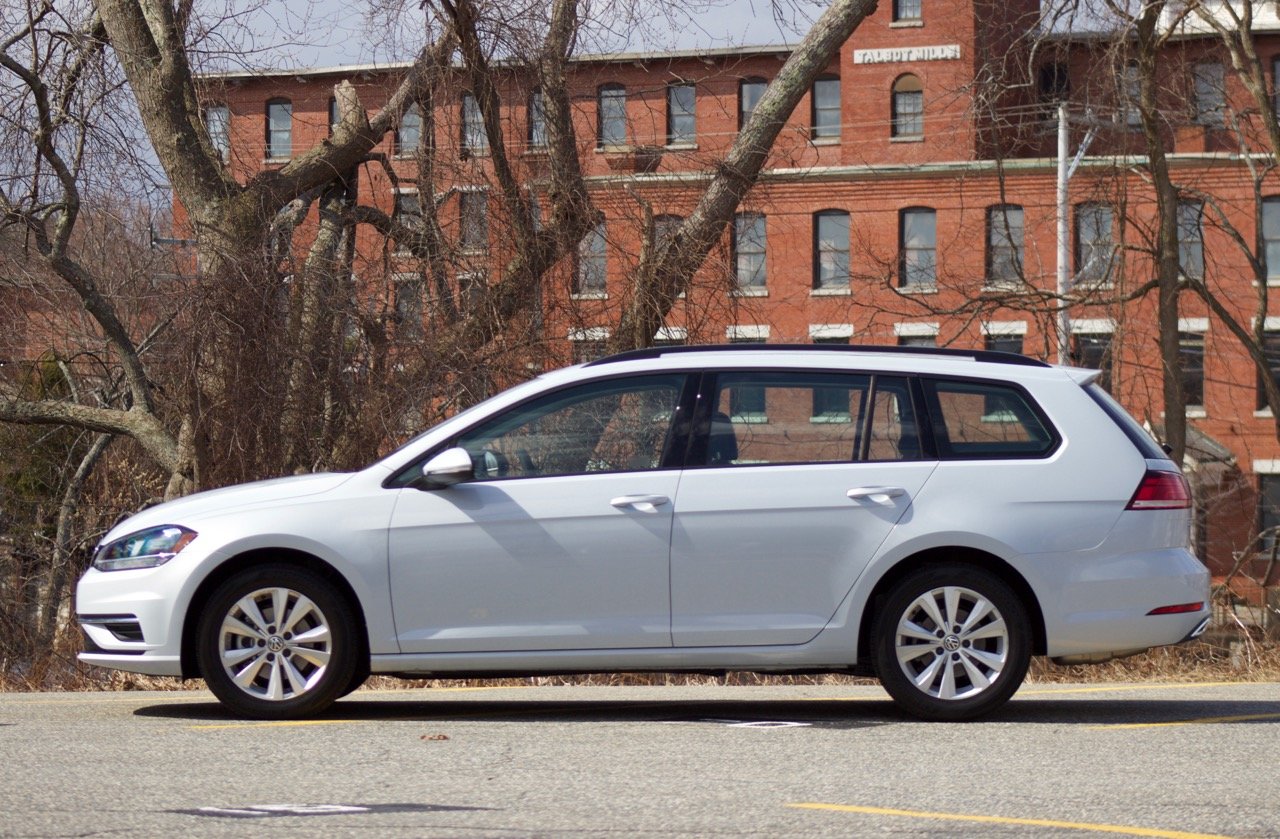 The SportWagen comes standard with a full complement of front- and side-impact airbags and a reversing camera, but it’s pretty bare bones when it comes to driver-assistance features as standard equipment.

If you opt for the S trim, we recommend selecting the optional Driver Assistance package, which adds blind-spot monitoring, rear cross-traffic alert, and forward-collision avoidance with pedestrian detection. I typically criticize automakers for making you pay extra for safety tech, but $450 isn’t that bad.

All these features, as well as lane-keeping assist, adaptive cruise control, and high-beam control come standard on the SE trim. 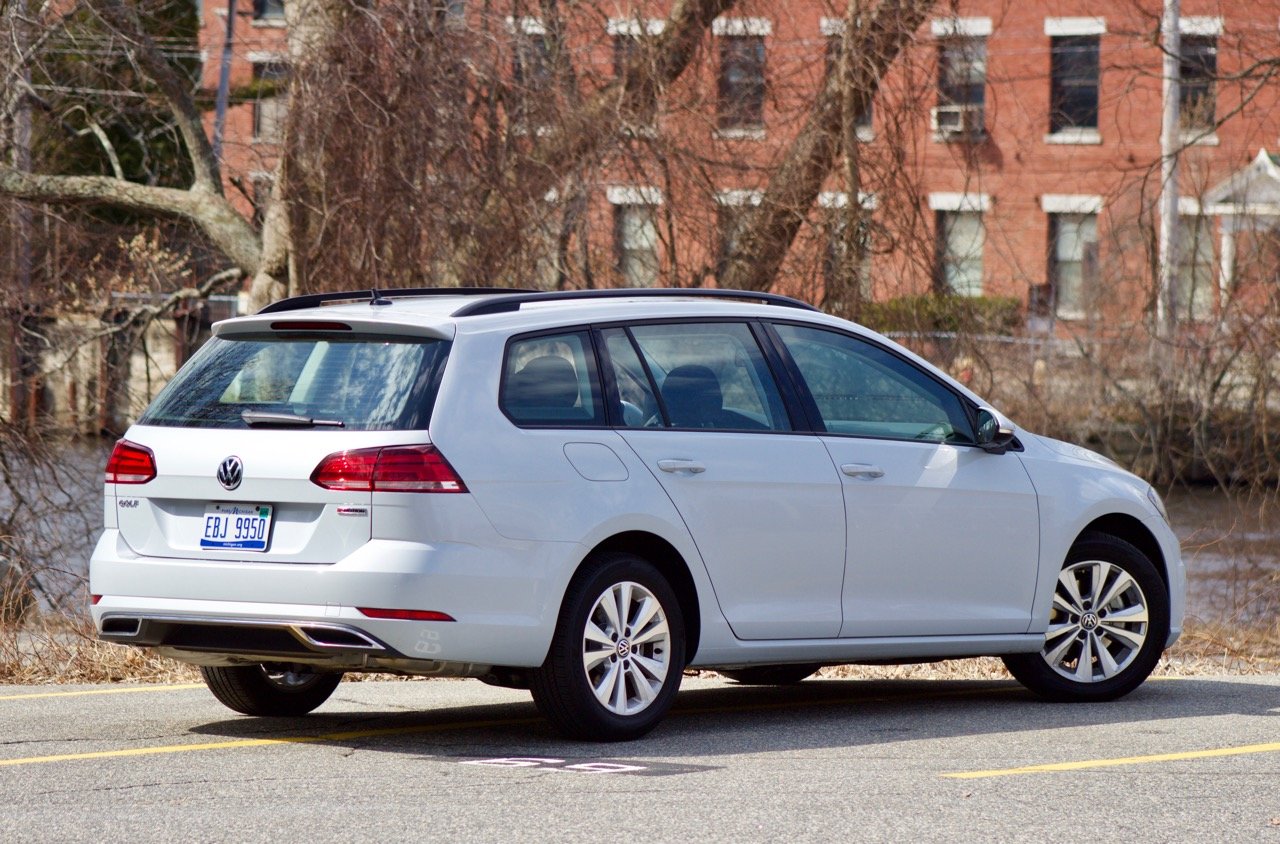 The 2019 Volkswagen Golf SportWagen starts at $21,895. Selecting the automatic transmission brings the price to $22,995. The S 4Motion trim we drove starts at $24,395, and, as we noted, the driver-assistance features add $450. Still, though, Toyota makes those features standard equipment even in the base Corolla.

While the driver-assistance features come standard on the SE, the starting price for that trim is $29,995. This is why CarGurus recommends the S 4Motion with the Driver Assistance Package—it allows you to enjoy AWD and a better engine while avoiding the SE's nearly $5,000 price bump.

When compared to crossovers, traditional station wagons are not without their downsides. Crossovers are typically at a perfect height for loading and removing people and gear. Wagons make you crouch lower to do many of the same tasks. Then there’s the mental effect of being low to the road. A car enthusiast might like being low for performance reasons, but people associate “high off the road” with “safety” (even though that’s almost entirely psychological).

The Golf SportWagen is a safe car, especially with the driver-assistance features. It is possible for a car to have a rewarding driving experience and be utilitarian, and the SportWagen proves that to find that combination, you don’t need to turn to a compact SUV.

What's your take on the 2019 Volkswagen Golf SportWagen?

John Wheelbase is same it is just longer.

LewBob "The base S trim comes very well equipped, with 16-inch alloy wheels, heated power-folding side mirrors". The S comes with 15 inch wheels with 195/65/15 tires unless they did a mid year update. It is the 4Motion that moves up to 16 inch wheel. Also, where did you see "power folding side mirrors?"

Have you driven a 2019 Volkswagen Golf SportWagen?
Rank This Car

What Buyers Security Do You Offer

What mechanism do you have for a safe purchase between private parties? I want to buy from a distant private party and then arrange for car shipment. Is there any type of escrow type exchange that p...

what is the ground clearance on the SportWagen S? Is it the same on the AWD version?