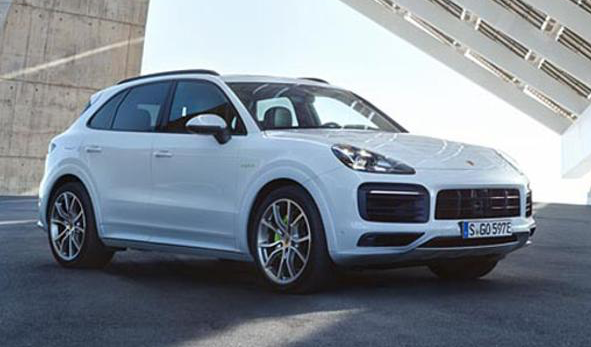 The term “hybrid” no longer means slow. Automakers are able to fit gasoline-powered vehicles with battery-electric technology, giving them better performance—in some cases, better than gas-only vehicles—without penalizing fuel economy. Thus, midway into the previous-generation Cayenne’s tenure in 2015, Porsche introduced the Cayenne E-Hybrid, a plug-in electric hybrid SUV. The entire Cayenne range has been redesigned for 2019, including an all-new Cayenne E-Hybrid.

All but the most die-hard Porsche fans would be hard-pressed to differentiate the 2019 Cayenne E-Hybrid’s overall shape from that of its predecessor—it even retains the 114.0-inch wheelbase from the old model. That said, all of the sheetmetal is new. It’s on a brand-new architecture—shared with the Audi Q7 and Bentley Bentayga—with increased amounts of aluminum that lower its bodyweight. Everything is sleeker design-wise. The side windows have a faster profile, the front end has been simplified, and the rear end gets a distinctive full-width 3D light bar, similar to those on other Porsche models. The Cayenne E-Hybrid doesn’t get ostentatious hybrid graphics or special fins to distinguish it from the regular Cayenne; lime green brake calipers that subtly peek out from behind the wheel wells and the door for the electric plug are its only exclusive features. Porsche knows better than to mess with a good thing, so the E-Hybrid does little to alter the Cayenne’s successful design.

The interior of the Cayenne E-Hybrid is more evolutionary than revolutionary. All of the design hallmarks of the previous two models are present and accounted for, from the grab bars beside the front seats, to the waterfall-like center console, to the analog clock perched at the top-center of the dashboard. Still, the design is more crisp than before and manages to hide a lot of the former button functions inside of panel with touch-sensitive zones. And, all five occupants will appreciate the additional width of the new Cayenne E-Hybrid.

Porsche has endowed the Cayenne E-Hybrid with its latest technology stack, which is shared with the current Porsche Panamera. The instrument cluster is made up of a traditional RPM gauge with a 7-inch LCD on either side. By default, those LCDs each display two circular readouts to provide a modern interpretation of the classic Porsche five-place gauge layout. The screens can be reconfigured for other data, however, like a night-vision camera feed. The center stack gets a large 12.3-inch widescreen LCD that serves infotainment duty and allows drivers to store profiles for everything, from the ambient lights, to the memory adjustment settings, to sound settings for the audio systems.

The Cayenne E-Hybrid pairs a 3.0-liter 340-horsepower 6-cylinder engine with a 100-kilowatt 136-horsepower electric motor. Together, these produce 455 hp and 516 pound-feet of torque, figures that are up by 39 and 81, respectively. With those increases, the hybrid SUV is able to zip to 60 miles per hour in as few as 4.7 seconds and onto a top speed of 157 mph. Power is sent to all four wheels via Porsche’s proprietary “Tiptronic S” 8-speed automatic transmission. Buyers who opt for the Sport Chrono package get even more performance out of the Cayenne E-Hybrid. It adds a feature that lets the Porsche provide all 516 lb-ft of its torque as soon as you press the accelerator. And, thanks to the standard active suspension and optional dynamic chassis control, all of that speed and performance is sure to be a stable experience.

But speed isn’t the full story with the Cayenne E-Hybrid. Porsche has upsized the battery capacity from 10.8 kilowatt-hours to 14.1 kWh, about a 30 percent increase. While official fuel-economy and all-electric range numbers weren’t available at the time writing, the automaker estimates that both have improved. Charging takes 7.8 hours; however, it can decrease to as few as 2.3 hours with the optional on-board charger. And, thanks to the battery, things like the climate control function while the ignition is switched off, and it can be accessed via Porsche Connect app.

Porsche has outdone itself with the latest Cayenne E-Hybrid. It proves that performance doesn’t have to come with the weight of a giant, overpowered engine; indeed, the E-Hybrid can operate in electric-only mode a significant amount of the time. What’s more, it’s an improvement on its predecessor that’s subtle enough to attract the brand’s discerning buyers.

What's your take on the 2019 Porsche Cayenne E-Hybrid?

Have you driven a 2019 Porsche Cayenne E-Hybrid?
Rank This Car