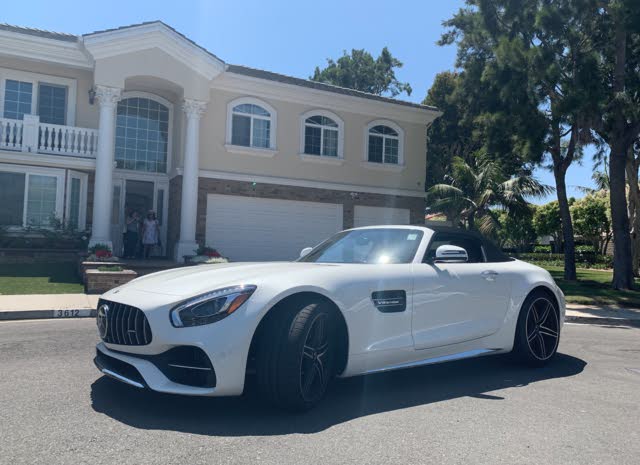 For 2019, Mercedes-Benz adds yet another new and exciting AMG model to its AMG GT lineup. Available in GT 53, GT 63, and GT 63S trims, this 4-door coupe features the distinctive AMG grille and front fascia reminiscent of the 2-door versions as well as a trio of available engines, each more potent than the last. While AMG also recently added an S Roadster to the AMG GT lineup that features the same 515-horsepower V8 as the GT S coupe, the main news for 2019 is the remarkable new 4-door.

The base version of the AMG GT 4-door is called the GT 53, featuring an inline 6-cylinder, a potent unit that displaces 3.0 liters, has two turbochargers, and pairs an electric supercharger with a 48-volt electric motor for a mild hybrid system that puts out 429 horsepower and 384 pound-feet of torque. With a 0-60 time of just 4.4 seconds and a 174-mph top speed, it’s already faster than almost everything else on the road. The GT 63 gets a 4.0-liter twin-turbo V8 making 577 hp and 553 lb-ft of torque, enough for a 3.3-second 0-60 time and a 193-mph top speed. Finally, the insane GT 63 S gets a more highly tuned version of the V8 good for 630 hp and 627 lb-ft of torque. All versions feature 4Matic+, Mercedes-Benz speak for all-wheel drive (AWD), and a 9-speed automatic transmission. The 4-door AMG GT hasn’t been rated for fuel economy yet, but the 2-door will return 16 mpg city, 22 highway, and 18 combined.

The 4Matic+ AWD system continuously varies the torque split between front and rear, and an active rear spoiler adjusts itself depending on speed, while additional aerodynamic features are available on V8 versions. Stepping up to the V8 trims, the GT 63 and GT 63 S, changes things quite a bit with the 4-door, as it adds air springs instead of steel coils, 4-wheel steering, and available carbon-ceramic brakes. Drivers can select between Slipper, Comfort, Sport, Sport+, Race, and Individual driving modes in addition to a Drift mode that directs all of the engine’s torque to the rear wheels for tire-shredding galore.

The AMG GT 4-door seats four rather than five, although buyers can choose between non-folding rear bucket seats or 40/20/40 split-folding rear seats that feature a center console and touchscreen. In front, there is the familiar pair of 12.3-inch display screens with one dominating the middle of the dash and the other serving as the instrument cluster behind the sporty flat-bottom steering wheel. Adaptive cruise control, lane-keep assist, automatic emergency braking, blind-spot monitors, and rear cross-traffic alerts are all on the menu for the AMG GT. The AMG GT hasn’t been crash-tested yet.

With a 4-door in the mix, the AMG GT lineup can now take aim at the higher-tier versions of the Porsche Panamera and Tesla Model S as well as the BMW M5. This may be AMG’s first 4-door, but it’s off to a great start.

What's your take on the 2019 Mercedes-Benz AMG GT?

Users ranked 2019 Mercedes-Benz AMG GT against other cars which they drove/owned. Each ranking was based on 9 categories. Here is the summary of top rankings.

Have you driven a 2019 Mercedes-Benz AMG GT?
Rank This Car