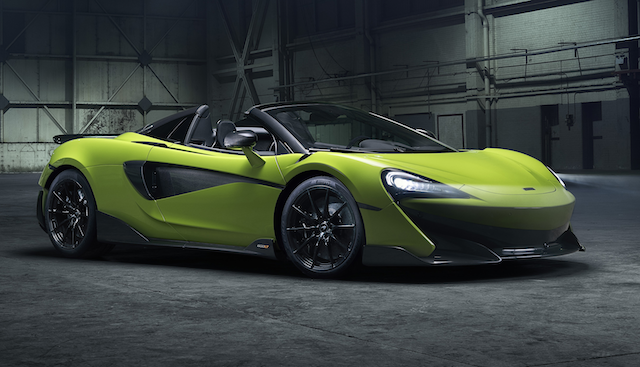 McLaren's 600LT sits at the top of the line of the brand’s “Sports Series.” The “LT” stands for “Long Tail” and references the nearly 3 extra inches of length this performance car has over the 570S. For 2019, McLaren introduces a Spider version of the 600LT.

Behind the driver is the familiar McLaren 3.8-liter twin-turbo V8 engine, but in the 600LT it has been tuned to make 592 horsepower and 457 pound-feet of torque driving the rear wheels through a 7-speed dual-clutch automatic transmission (DCT), enough for a quarter-mile sprint of 10.4 seconds and a 204-mph top speed. The short exhaust, featured on the Spider and Coupe, exits from the top of the car rather than from out back, emitting a louder sound than the standard 570S.

The 600LT tips the scales at less than 3,000 pounds, so it is remarkably light for a car with so much power. In addition to the weight savings, the 600LT features carbon-ceramic brakes, sticky Pirelli Trofeo R tires, carbon-fiber winglets behind the front wheels, and aerodynamic tweaks to the body, including a fixed rear wing to make it a sharper, harder, and more track-focused ride than the other Sports Series models. The standard finish for the 600LT is Dark Palladium, but Gloss Finish Visual Carbon Fiber is a tempting option.

The interior is racier as well. There are low and deeply bolstered carbon fiber bucket seats as well as an Alcantara-wrapped steering wheel. Power windows, an infotainment screen, a digital instrument cluster, air conditioning, and a radio are also included. For extra weight savings, though, the air conditioning and radio can be removed. Safety features are limited to a reversing camera and front and rear parking sensors.

The 600LT offers performance credentials and sharp styling, competing with other McLaren models like the 720S or the Senna, but it comes in at a much lower price.