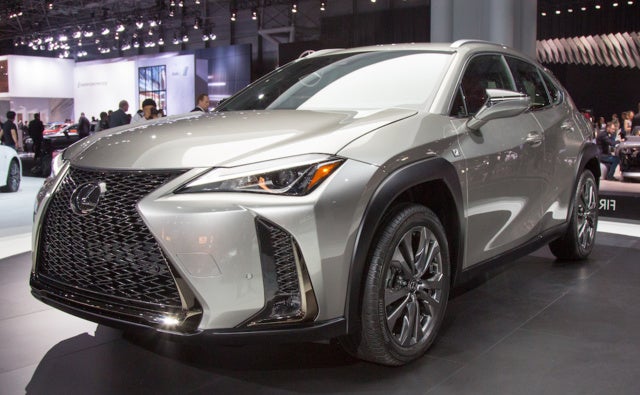 Looking for a Used UX in your area?

The automotive industry has tipped to a point in which SUVs and high-bodied vehicles are far more popular than their sedan counterparts. Thus, Lexus sees its SUV lineup expand from five models to six with the addition of the all-new UX. At 177 inches in length, the UX is at the longer end of the subcompact class, poised to do battle against other premium rides. In a roundabout way, it also replaces the departed CT as the brand’s new entry-level model.

From the outside, the UX follows in the vein of its larger NX and RX siblings with an elongated nose, full-height pinched grille, and creased, multi-faceted panels. It does away with rear quarter-panel windows altogether, for a tighter look. Where the UX strikes out on its own, however, is in having plastic wheel flares that are much more pronounced and rugged-looking than those of other Lexus SUVs, not to mention a prominent full-width 120-LED light-bar serving brake-light duty. Both of these highlight the UX’s purpose in life, which Lexus describes as “urban explorer.” One way the crossover makes good on that claim is with a tight turning radius.

Inside, the cabin follows Lexus’ recent trend of art-in-motion, echoing a lot of the same origami-inspired shapes seen on the exterior. Despite the high visual stimulation and great many panels and pieces, it’s actually organization within chaos: The switchgear is all neatly arranged, well-marked and easy to reach. For an extra touch of class, a gloss-black freestanding panel incorporates both the wide-resolution infotainment LCD and an analog clock. Other than that, the seats are sporty and well-bolstered and can accommodate five people. F-Sport versions get even sportier seats, unique interior colors, and a unique instrument panel.

Lexus splits the new UX into two basic powertrain packages. The UX 200 gets an all-new 2.0-liter inline 4-cylinder engine, driving the front wheels via a continuously variable automatic transmission (CVT). However, there is a traditional set of gears to help the UX 200 launch from a stop efficiently and without sacrificing power. The F-Sport package adds paddle shifters and a range of preset gear ratios. Unlike its competitors, the UX 200’s engine isn’t turbocharged, which explains the lowest-in-class 168 horsepower and 141 pound-feet of torque. However, its estimated 33 miles per gallon in combined driving is among the highest.

Buyers seeking all-wheel drive (AWD) will be served by the hybridized UX 250h, which combines a version of that same 2.0-liter engine and transmission on the front axle with an electric motor and battery on the rear axle. Total output is expected to be 176 hp, while fuel economy is estimated at 38 mpg combined. The UX 250h links the front and rear axles together with an electronic “eAWD” function, which distributes power and braking across the axles automatically as the driving situation changes. A standard system called Predictive Efficient Drive uses ongoing data about a driver’s behavior along routes to optimize the charging and use of the battery. For example, if the car notices that a driver has a habit of stopping or slowing down in a certain location, it will increase regenerative braking efforts as soon as the accelerator is released. Predictive Efficient Drive can also use historical data to detect downward hills and other ideal places in which to put extra effort toward recharging the battery.

Naturally, the technology theme also extends to the UX’s cabin. The latest version of Lexus’ Enform technology suite features standard Amazon Alexa integration, through which drivers can ask the car to do everything from reading or playing media to controlling smart-home devices and functions. Apple CarPlay is also standard (but not Android Auto), which enables further voice commands through Siri.

Not only is the UX an all-new product from Lexus, it’s the launch platform for a new sales model. In addition to traditional sales and lease programs, the brand plans to offer a subscription model. Details of the lease program and general pricing will be announced closer to the car’s December 2018 launch date.

Looking for a Used UX in your area?