The RC F is a powerful V8 sports car with the comfort we've come to expect from Lexus. 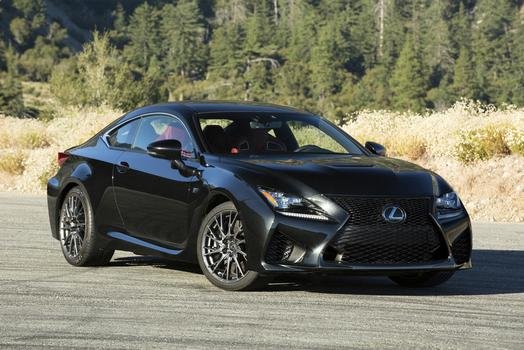 Rear-wheel-drive coupes have a place in every car enthusiast's heart, but they don't have a spot in every enthusiast's garage, because children and spouses and college loans have built up a natural resistance. When a Lexus RC is on your shopping list, it's safe to say you've cleared those hurdles. The RC is nice enough, but the RC F is its own beast. It's the alternative to a Mercedes-AMG C63, BMW M4, Audi RS 5, or Jaguar F-TYPE R. Why snag a Lexus sports car? A naturally aspirated V8 with more than 460 horsepower, snug bucket seats, a carbon-fiber roof, and brake calipers so orange they could squeeze out juice are just some of the reasons. 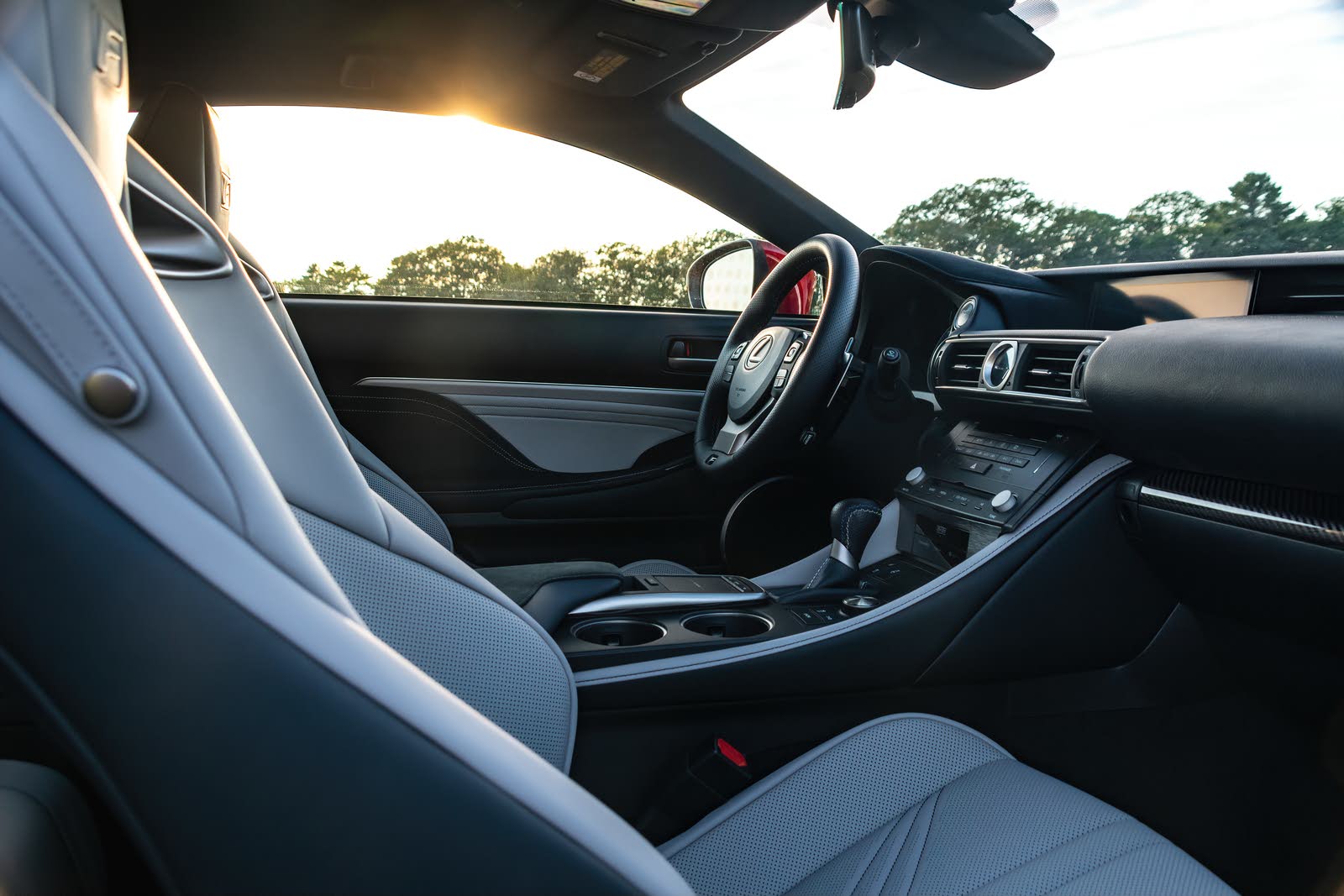 When the RC F debuted for the 2015 model year, it was a rare gem in the Lexus lineup. Now there's a second rear-wheel-drive coupe with the same V8, the LC, and it's a stunner that will absolutely belong on the lawn at Pebble Beach in 30 years. The RC F is based on the current IS sedan, and it cannot distill the LC's level of elegance from its older, compact chassis. Pretty the RC is not. The series of convex and concave surfaces on the front headlight assembly play a game of eyeball ping-pong. Angles, textures, scoops, vents—the RC F has them all in a very tight space, and that's just the front. I like this car's style anyway. It's aggressive and wide-stanced like a GT3 racer, which it essentially is. The Lexus factory team races the RC F in IMSA, so the street car's front fender vents and squared-off rear fenders are appropriate. In my test car's Infrared paint, the body's angles and cut lines are even more pronounced as the sun hits. This paint glows. With carbon-fiber trim, a deployable carbon spoiler on the trunk, stacked quad exhaust tips, and 20-spoke BBS wheels with orange calipers, the RC F is begging for a burnout. The detail extends to the blue intake manifold on the engine, which matches the blue F logo. At first glance, I thought it was a cover graphic like most cars have. But the cover has a cutout for the real casting beneath.

The white leather bucket seats are an art all to themselves. The metal neck cutouts, the soft black seatbacks, and the wavy stitching that traces the bolsters up to thin headrests are all knockouts. The leather is ultra-soft, including on the center stack, where black and white leather combine. Blue and white stitching for the gearshift lever and the thick steering wheel adds more color. A black microsuede headliner and door inserts pair with more carbon trim to complete what is, like the exterior, a very complex look. Disappointing materials for the dash topper, upper-door panels, and lower dash come from the cheaper Lexus IS. These surfaces should be stitched in leather or be softer to the touch, considering the RC F's $65K-and-up price. Regardless, the trick LCD tachometer with its physical bezel offers a great combo of a smartwatch and an analog timepiece. 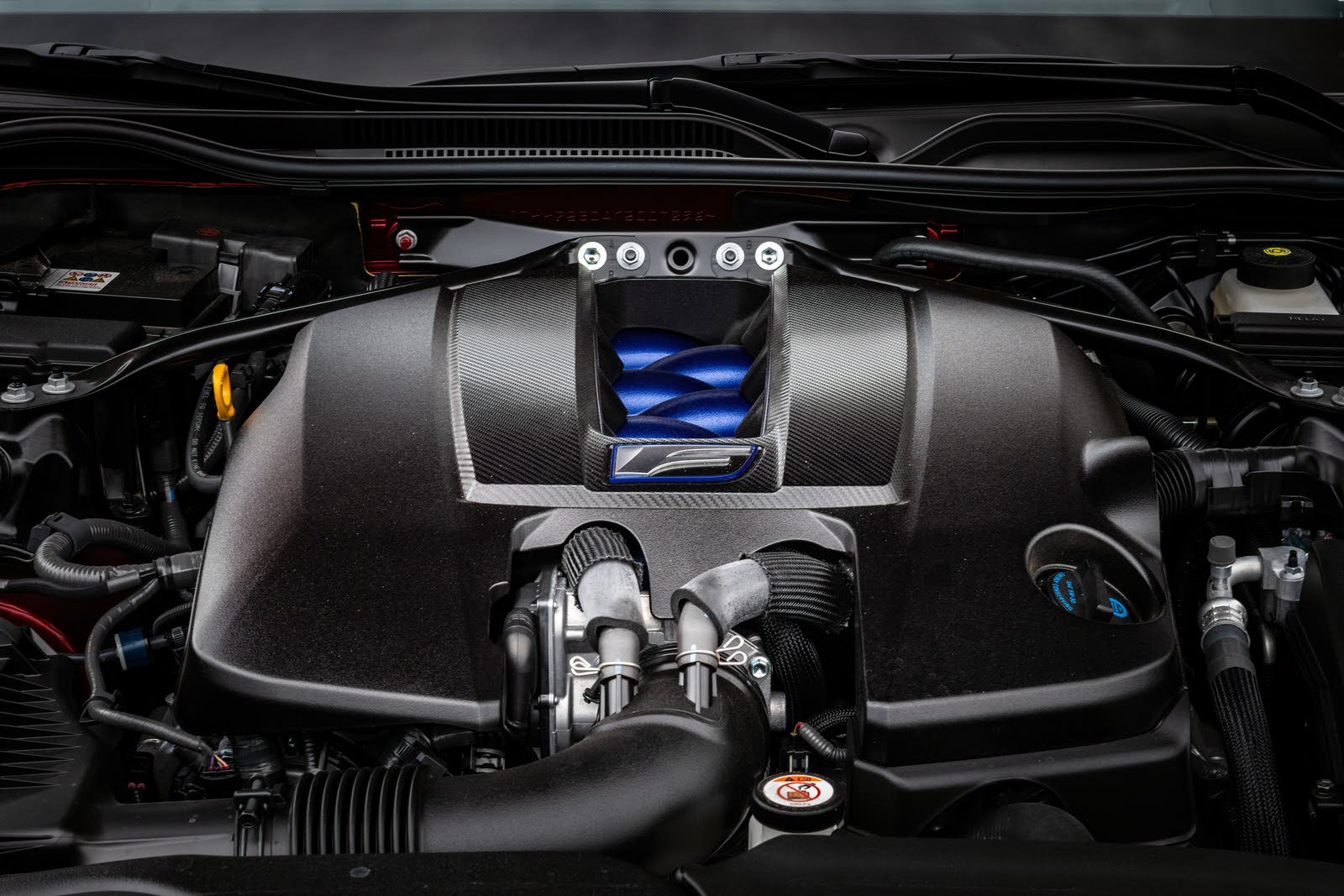 A high-revving naturally aspirated V8 backs up the RC F's exuberant style. At 5.0 liters without a turbo- or supercharger, this is essentially Japan's version of the Ford Mustang GT's Coyote engine. Peak power requires you to press long into each of eight gears on the way to the car's 7,300-rpm redline. The engine supplies 467 horsepower and 389 pound-feet of torque, yet it's a quiet and lazy machine below 3,000 rpm. That's good, because in normal cruising, the RC F is a smooth gentleman. Being a Lexus, comfort is never sacrificed for race-car brutality. Press to 4,000 rpm and beyond and the cam profile switches to uncork the engine's explosive sound and thrust. There's almost no sound coming from the exhaust—it's all intake and treble. The LC 500 breathes easier and lets more of that V8 fire escape out the back. But dang, the RC F is fast.

However, its speed is imperfect, mostly due to the 8-speed automatic's reluctance to upshift at full throttle with the steering-wheel paddle shifter when it's not in manual mode. There's no setting to change this behavior. It's also not as quick to downshift as the new 10-speed in the LC 500. The steering, too, is not as laser-precise as the LC 500's, nor does it have that model's rear-wheel steering, which sharpens response to within a millimeter of your hand inputs (Lexus has made it optional on the 2020 RC F). Thankfully, the suspension is on the job. The RC F stays flat, poised, and balanced at all times. Adaptive dampers never get too stiff, though you'll never mistake the RC F for a cushy ES sedan. Braking feel is excellent.

A limited-slip differential comes standard. On my car, the torque-vectoring differential can send more power to the inside wheel through a sophisticated and fast set of clutch packs. It also comes with three modes (Normal, Slalom, and Track) that can vary how the axle routes torque to each tire in specific cornering conditions. I couldn't and wouldn't feel the difference on public roads. This is a serious piece of hardware (and it's $5,500 expensive, as it's paired with the carbon trim). You probably don't need it. While it's proof the RC F can hang with the best, other hot-rods like the C63 are more direct in their steering inputs and have better transmissions. Those weights hold the RC F back from full greatness. 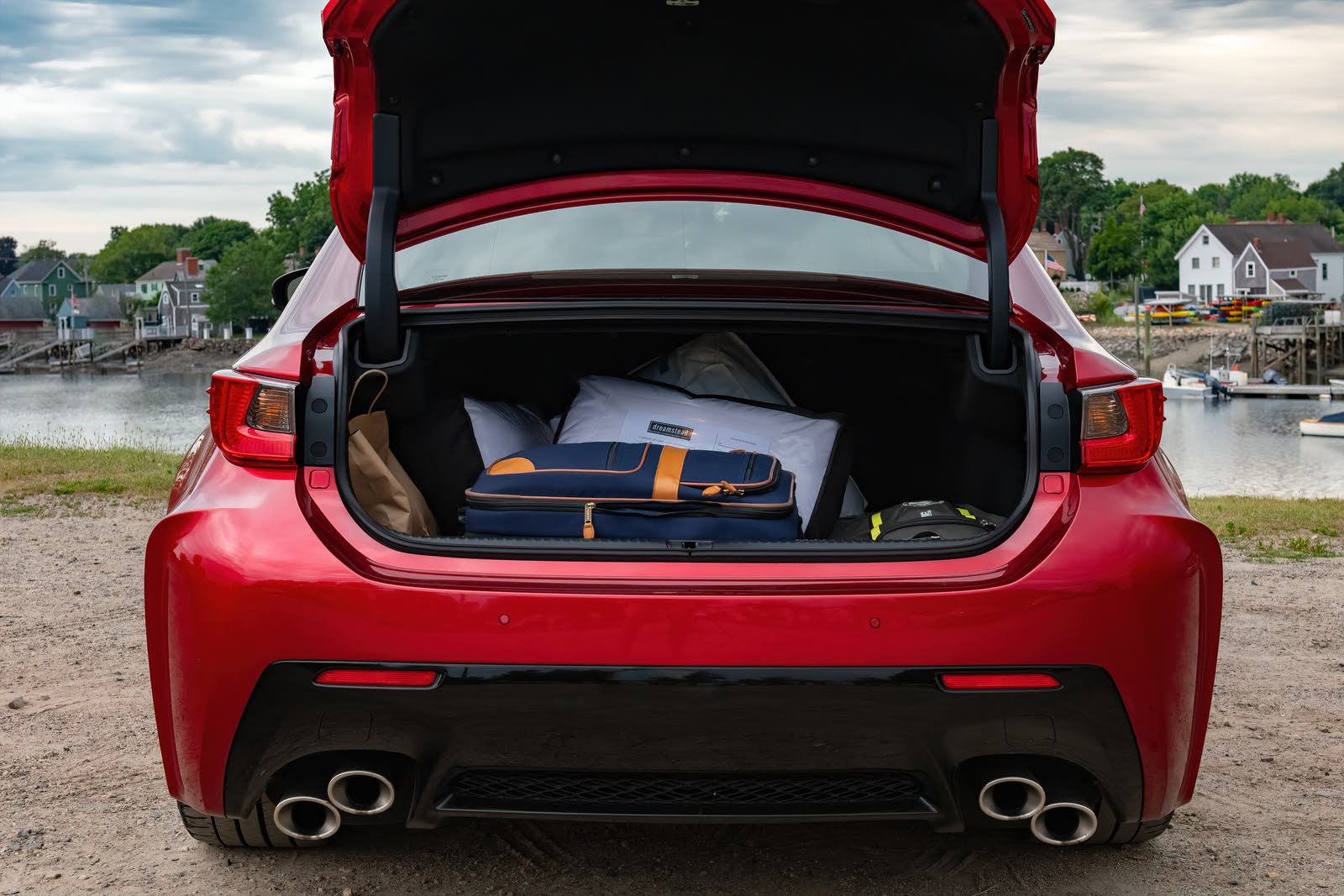 Sightlines in a two-door coupe are usually bad. But the RC F maintains everyday practicality with large windows, minimal blind spots, and large side-view mirrors. The backseat is a nice piece of fancy furniture you won't use, but if you do need to squeeze back there, the front seats both power forward to allow an ungraceful entry and exit. The rear is usable for quick trips, as it has separate air vents, cupholders, armrests, and map lights. The seats don't fold down. There is only a pass-through for skis and other narrow, long items. As for the trunk, I stuffed a whole lot of vacation gear into its 10-cubic-foot space (for comparison, the LC 500's trunk is a puny 5.4 cubic feet).

I drove in comfort for nearly 800 miles. This car is a grand tourer that leaves you refreshed after hours of driving, not achy and miserable. Not every sports car this capable can do that. While the steering-wheel controls for the instrument panel's screens are easy to use—and there are plenty of knobs and buttons for the stereo, climate, and driving modes—the infotainment system's touchpad is bad. Lexus, for the life of itself, cannot design a functional system that doesn't distract the driver. I'm sure you'd get better with the pointer-style system after some practice, but since there are enough buttons for everyday tasks, you won't have to use it too often. 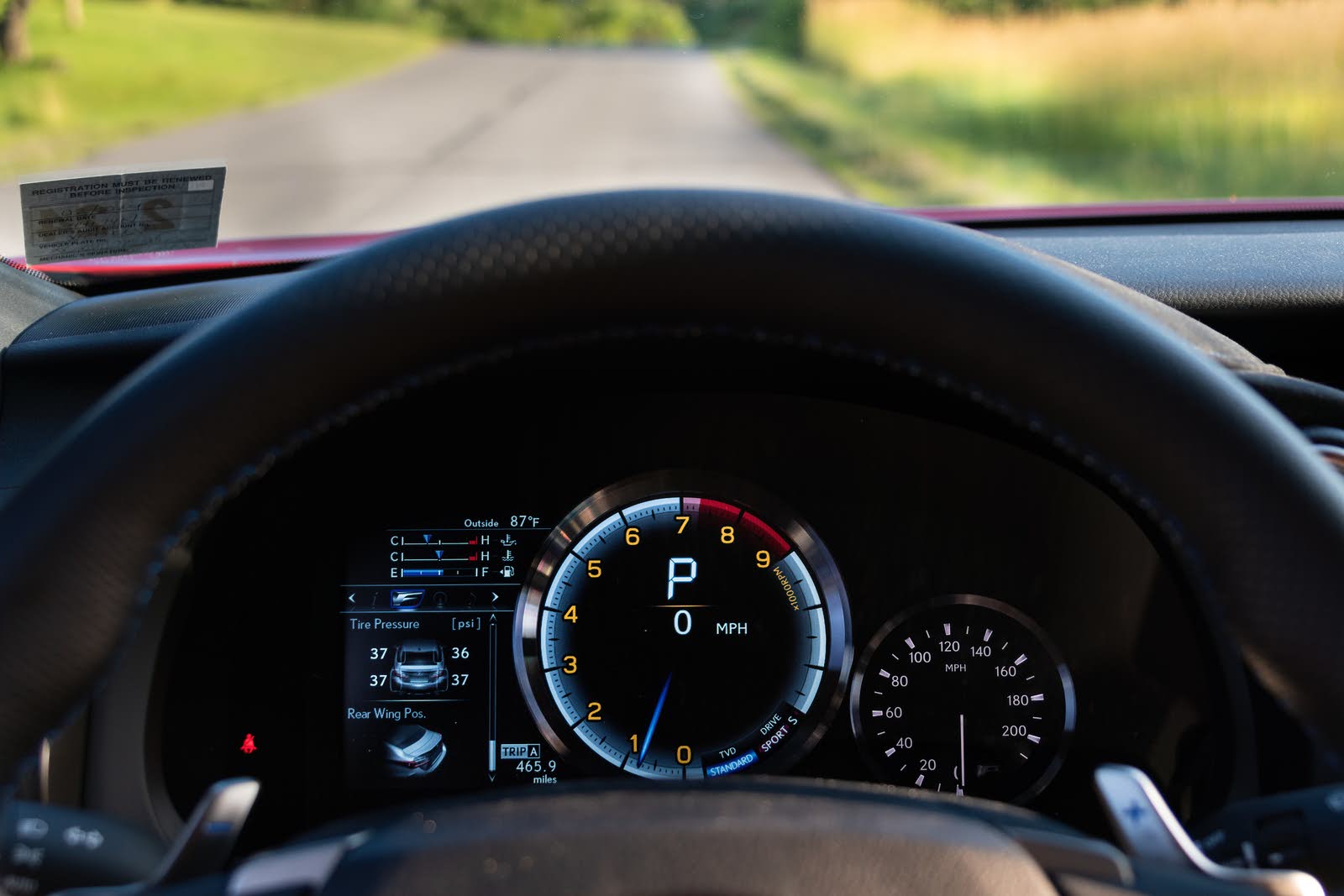 When you do wade into the RC F's infotainment screen, you'll find that Apple CarPlay has a much higher resolution than the car's normal interface. Because the RC F doesn't have a touchscreen, using CarPlay is almost impossible unless you use voice commands. The maps look old. Lexus Enform uses a connected smartphone to run apps like NPR on the main screen, but many cars today install these apps onboard, where they load faster and won't run up your cellular data plan.

Still, Lexus's navigation uses accurate voice inputs for addresses, has dynamic traffic re-routing, and lets you check the traffic on specific routes saved in advance. The Mark Levinson stereo's 17 speakers sound fabulous. The changing graphics for the tachometer really get you into the sporting mood. Twist the dial to Sport+, and an animation quickly swirls the tach into a white-edged, big-numbered dial that flashes when you approach redline. It also has a dynamic redline, so when you start the RC F cold, the max revs increase as the engine warms. That's clever and helpful. So much other info, including torque distribution, a lap timer, and a G-force meter, is accessible straight from the instrument cluster. While lane-keeping assist is included, there is no semi-automated driving assist. There really needn't be in a car this fun to drive. 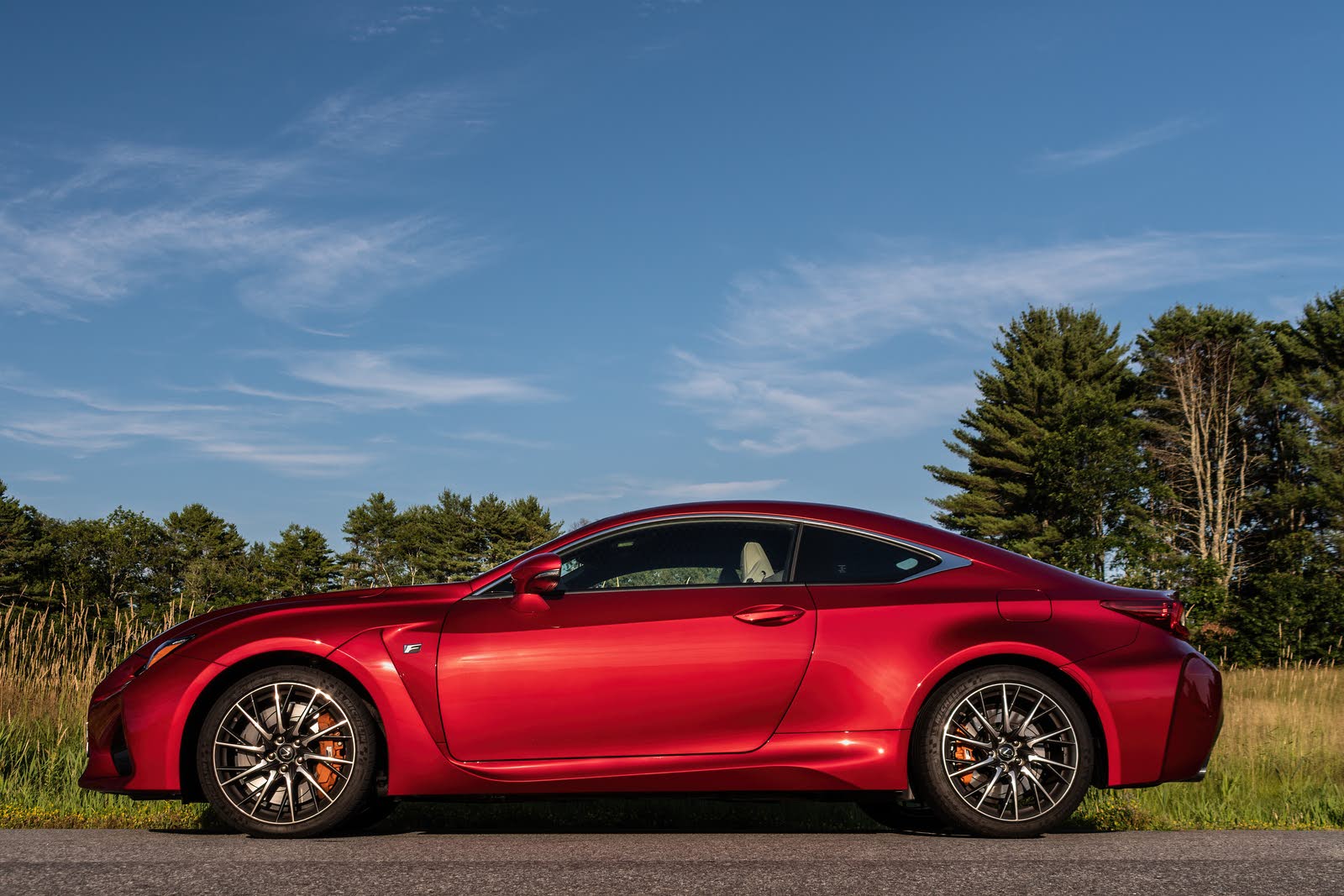 The RC F and the more affordable RC 300 and RC 350 have not yet been tested by the National Highway Traffic Safety Administration (NHTSA). The Insurance Institute for Highway Safety (IIHS) has tested a 2015 RC 350 F Sport, which is mechanically identical to the structure of the 2019 models. It scored the top Good rating in all six crash tests plus the best Superior rating for its standard forward emergency braking. From the IIHS photos and results, the RC F has a strong body structure that holds up well in crashes. Pedestrian detection, lane-keeping assist, adaptive cruise control, automatic high beams, and two knee airbags are also standard. LED headlights come standard, but the optional Premium Triple Beam LED headlights ($1,160) are incredibly bright. Blind-spot monitoring with rear cross-traffic alert is part of a $3,240 option package. 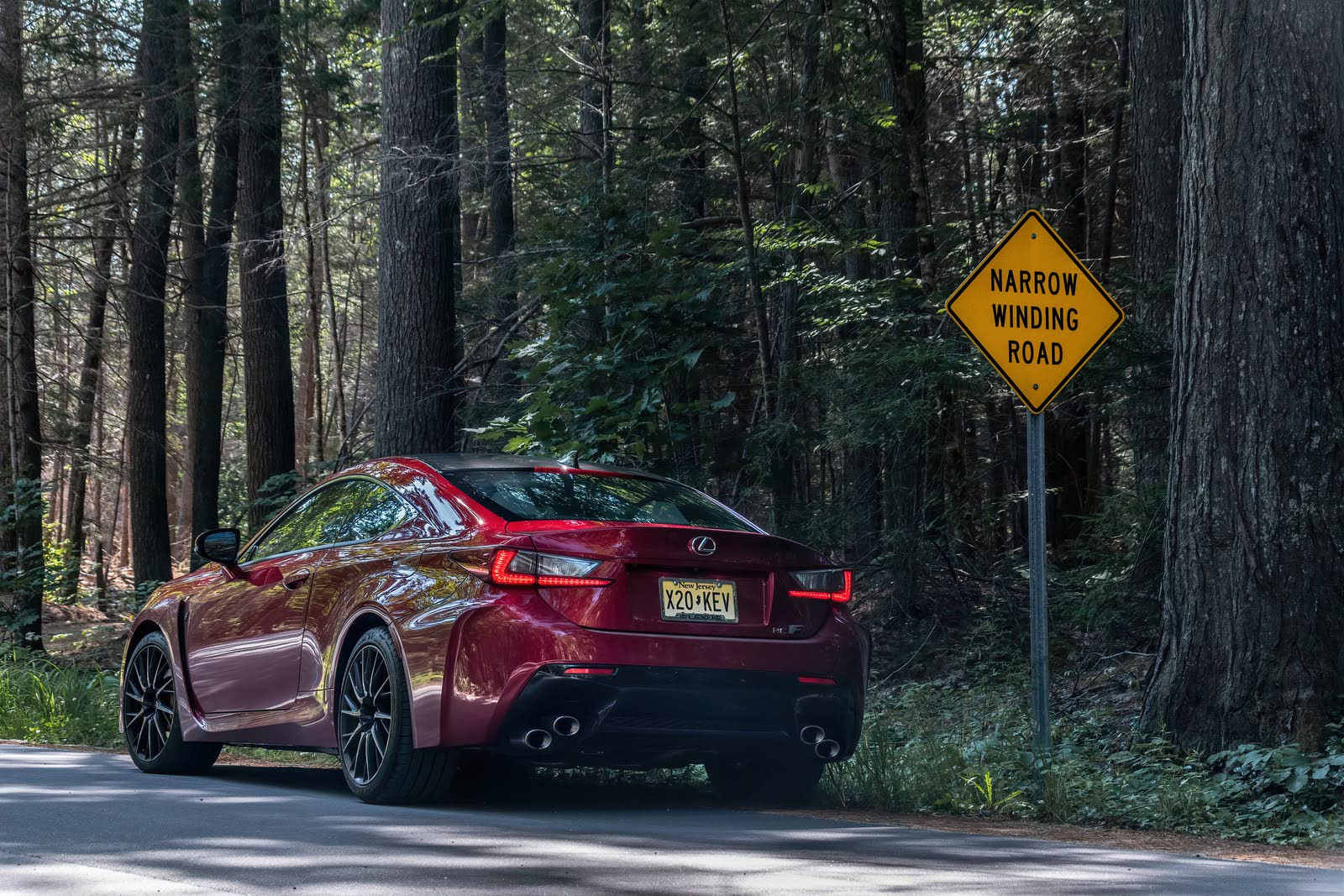 With a starting price of $64,750, the 2019 RC F represents real savings next to German and British competitors. Even fully loaded at $82,463 with a $1,025 destination charge, it's still a big value, considering the performance hardware and luxury features. But the RC F isn't the top-performing car in this segment—even at a discount. With used LC 500 coupes heading south of $80K, it's pretty hard to justify a new RC F—especially one as expensive as my tester—when there's a flashier, better Lexus coupe in the same dealership's lot. Still, for a car this unique, even with its shortcomings, the RC F is an experience you'll lust after and remember.

Christopher If you want a blazing fast car that's comfy too, buy a Mustang and use the other $40K to put your kid to school, and your fellow Americans to work.