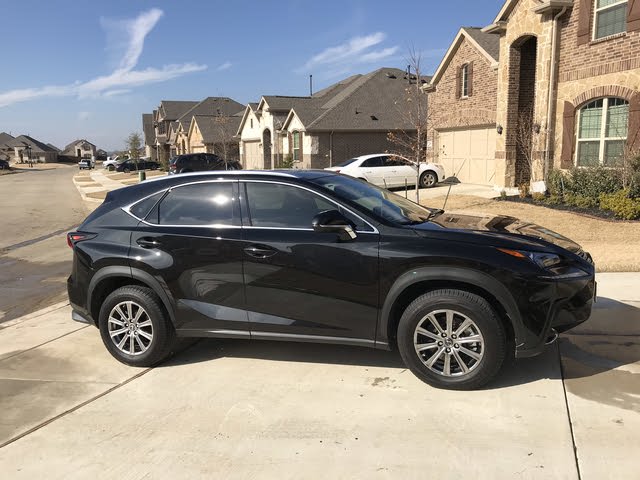 The Lexus NX arrived in 2015 as the brand’s answer to the compact luxury crossovers that had been gaining steady sales momentum over the previous decade. Early gasoline-only models were badged NX 200t, but with a 2018 facelift, the nomenclature became NX 300. For 2019, the NX 300 continues unchanged.

The NX actually debuted Lexus’s current design language, which features well-placed folds and creases that meet natural curves for an overall shape that is unusual, yet pleasing. These days, the NX itself looks like a mini-RX from the outside-- and that’s a good thing. Inside, you’ll find a cabin that’s a little more dated than those of the automaker’s newer wares, but it’s still class competitive and more than premium. Like other Lexus models, the NX 300 is available with the F SPORT treatment, which consists of a prominent mesh grille, unique front and rear bumpers, special wheels, and dark chrome trim.

All NX 300s are powered by a turbocharged 2.0-liter inline 4-cylinder engine capable of 235 horsepower and 258 pound-feet. Plenty of vehicles in this class come with eight or more gears, but the NX 300 makes do with a 6-speed automatic transmission, along with either standard front-wheel drive (FWD) or optional all-wheel drive (AWD). The Drive Mode Select system comes as standard equipment, with Normal, Sport, and ECO modes. F SPORT models also see an adaptive variable suspension. The NX 300’s fuel economy ratings stand at 22 miles per gallon city, 28 highway, and 25 combined on premium fuel.

The NX 300 has safety in mind, because a reversing camera and the entire Lexus Safety System+ suite is standard equipment across the range. This includes forward collision warning, automatic emergency braking with pedestrian detection, automatic high beams, and adaptive cruise control. Blind-spot monitoring and a surround-view camera system are optional.

In the space of compact crossovers, the NX 300 shines with a unique exterior and interior, not to mention a competitive set of standard and optional features. Even into its fifth model year on the market, it’s an exciting option.

How Do I List A Car For Sale. On Cargurus

Will You Buy A Lease

i have a lease from Lexus ( Toyota Motor Company holds the lease). will you buy my lease? It is under miles 19890

How Do You Report An Accident?

My NX300 Is Grinding In Reverse.

My new Lexus NX300 is grinding in reverse, especially after initial start... out of the garage.