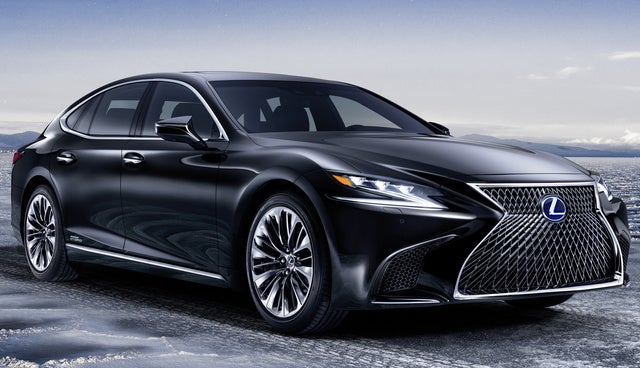 The hybrid version of Lexus’s full-size LS sedan was first introduced back in the mid-2000s. The all-new fifth generation debuted for 2018. The LS 500h requires a close look to tell it apart from the standard LS 500. Since the design is fresh, it goes into 2019 unchanged. There is one powertrain choice for the LS 500h, and the only major choice buyers will have to make is whether they want rear-wheel drive (RWD) or all-wheel drive (AWD).

Like the standard LS model, the LS 500h gets a 3.5-liter V6. There aren’t turbochargers like there are on the regular LS 500. Instead, the V6 is aided by two electric motors and a lithium-ion battery for a combined 354 horsepower and 258 pound-feet of torque. That’s under the standard LS 500’s 416 hp and 442 lb-ft, but the hybrid is no slouch with a 0-60 time in the low five-second range. The transmission setup is a novel continuously variable transmission (CVT) that works with a conventional 4-speed automatic to simulate the ratios found in the 10-speed found in the normal LS 500. A manual-shifting mode is also part of the package.

The LS 500h is available with either rear-wheel drive (RWD) or all-wheel drive (AWD) and features multi-link suspension. Of course, the big reason to buy a hybrid version of any automobile is savings at the gas pump, and even though the LS 500h is a big and heavy luxury sedan, it manages 25 mpg city and 33 highway with RWD. Opting for AWD drops those figures by 2 mpg. Depending on the situation, the hybrid gets 4-6 mpg better than the standard LS 500.

The interior of the LS 500h is available with hand-pleated, origami-inspired interior door trims and glass ornamentation. Hybrid powertrains typically cut down a bit on interior space and the LS 500h is no exception. The sacrifice in space is only in the trunk though, with 15.2 cubic feet of room instead of the 17 found in the standard car.

An available Executive package adds four-zone climate control, 22-way power-adjustable heated and cooled rear seats, a raised ottoman for the right rear seat, massage functions, and a touchscreen panel on the rear armrest to control features like the stereo, lighting, and climate control. Up front, all LS 500h models get the 12.3-inch infotainment screen operated via touchpad.

The LS 500h doesn’t cost much more than the standard LS 500 and it saves a significant amount of fuel without sacrificing anything in the way of luxury.