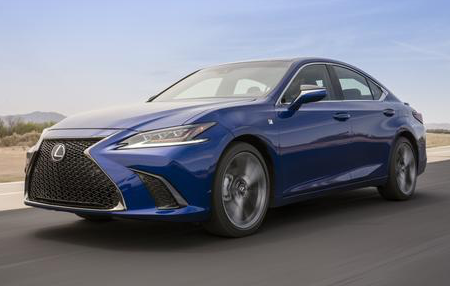 The Lexus ES has enjoyed six generations on the market, growing from mid- to full-size and getting progressively nicer. New for 2019, Lexus is introducing an all-new seventh generation ES.

Despite a similar design, it’s easy to tell that the 2019 ES is new. The next-generation model is longer, lower, and wider, giving the care a more athletic look.

The ES sedan gets the latest in Lexus fashion, starting with an expressive version of the brand’s spindle grille that replaces the horizontal slats with vertical ones. The headlights feature L-shaped daytime running lights. The sides smoothly combine chisels and curves, and the rear end highlights the evolution of the ES into a sport sedan. Also, for the first time, the ES is being offered with the Lexus F SPORT treatment. Instantly recognizable, the F Sport treatment showcases a singular front fascia with a mesh grille made of interlocking L shapes, distinct wheels, dark chrome trim, and exclusive paint colors.

If the interior of the previous ES began the transition from tranquility to high-tech sportiness, the 2019 model completes the transformation. Its cabin is the latest to benefit from what Lexus calls the Seat in Control concept, a design theory that all important functions should be within easy reach and sight of the driver. To that effect, all of the controls and displays effortlessly blend form and function. One notable design element is the placement of the drive mode selector at the top of the instrument cluster. Whether buyers choose the regular model’s sophistication or the the F SPORT’s aggression, there’s no doubt as to this car’s newfound edge. As always, there’s room for five.

Lexus has reworked the technology stack of the ES which benefits from all-new interfaces. The instrument cluster is comprised of either a 7-inch LCD and analog tachometer, or an 8-inch LCD with a movable chrome ring. The infotainment system floats atop the dashboard in a standalone panel, and it comes in a standard 8-inch form or an optional 12-inch layout when equipped with navigation. It’s controlled by a revised touchpad in the center console. The updates make the ES the first Lexus model capable of using Apple’s CarPlay—though not Android Auto—and is Amazon Alexa enabled. Drivers with Alexa devices can use them to interact with the ES from within their homes and vice versa.

All models are designated “ES 350,” owing to their improved 3.5-liter 6-cylinder engine. Though EPA fuel economy figures aren’t yet available, output is rated at 302 horsepower and 267 pound-feet of torque, up 34 hp and 19 lb-ft respectively. This drives the front wheels via a brand-new 8-speed automatic that Lexus claims combines the best virtues of an advance dual-clutch unit and a traditional torque-converter unit, allowing the engine to run at a lower RPM range. In addition, all models get a standard Drive Mode Select system, which offers Eco, Normal, and Sport modes. Meanwhile, F SPORT offers an Adaptable Variable Suspension (AVS), which replaces the standard setup with dampers that adjust in real time, several times a second. Models with AVS get a Sport S driving mode, instead of Sport, and also gain Sport+ and Custom driving modes.

Cars, luxury cars in particular, are becoming safer than ever. The 2019 ES is no exception, and it includes the entire Lexus Safety Suite System+ 2.0 (LSS+ 2.0). In addition to pedestrians and other vehicles, the pre-collision function is now able to detect bicyclists. Also included are lane-departure warning with assist, adaptive cruise control that works at all speeds, and lane-keep assist—a safety feature that actively keeps the car in the center of the lane markings or follows the car ahead when lane markings are illegible. The ES has not been crash tested by the National Highway and Traffic Safety Administration (NHTSA) at this point.

As one of its core models, Lexus as improved the 2019 ES in every measurable way. By adding healthy dose of sportiness, the ES steps out of the shadow cast by the pricier GS. Look for official pricing and fuel economy figures soon, followed by a rollout in the fall of 2018.