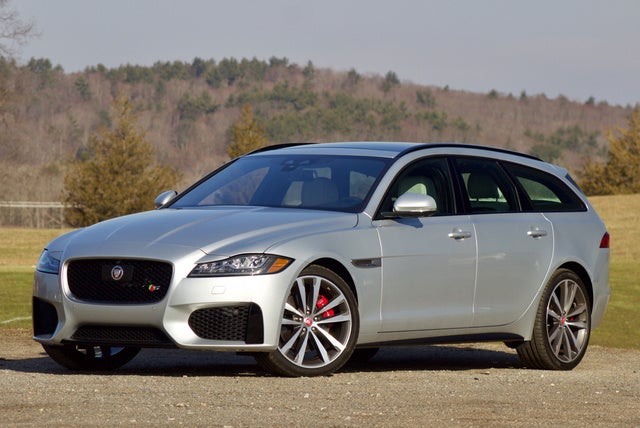 Looking for a Used XF Sportbrake in your area?

Jaguar has gotten with the times by offering a full range of crossover SUVs, including a fully electric one. But in 2017 the company did something more old school by offering a station wagon version of its midsize XF model. Jaguar calls its XF wagon the Sportbrake. The Sportbrake was previously available only in the XF’s top-tier “S” trim here in the U.S. For 2019, there is a 30t Prestige model that also gets all-wheel drive (AWD) but comes at a lower price thanks to a less powerful 4-cylinder engine.

Behind the XF Sportbrake’s prominent, gaping grille is a 3.0-liter supercharged V6 engine that is good for 380 horsepower and 332 pound-feet of torque. It drives all four wheels through an 8-speed automatic transmission. That extra bodywork over the rear haunches adds extra weight, but the Sportbrake doesn’t lose much in the process. It will do 0-60 miles per hour in about 5.3 seconds. The XF Sportbrake’s V6 is smooth, but it’s not particularly frugal at 18 mpg city, 25 highway, and 21 combined. The Prestige model is also AWD, but it gets a smaller 2.0-liter 4-cylinder engine good for 296 hp and 295 lb-ft of torque.

Room in the back of the Sportbrake is impressive at 31.7 cubic feet, which is nearly as much as Jaguar’s taller F-Pace SUV. With the rear seats folded nearly flat, the space opens to a cavernous 69.7 cubic feet. The cabin itself has high-quality fit and finish, and the dash is dominated by a 12.3-inch digital instrument panel and touchscreen. An 8.0-inch touchscreen is standard for the entertainment system, while a Technology Package adds a larger 10.0-inch screen, navigation, Wi-Fi hotspot, and a higher-quality Meridian stereo. The XF Sportbrake is equipped with a panoramic sunroof, keyless ignition, and satellite radio. A Comfort & Convenience Package adds front heated and cooled seats, rear heated seats, and soft-close doors.

The XF hasn’t been crash tested, but options on the safety front include adaptive cruise control, forward-collision warnings with automatic emergency braking, a head-up display (HUD), a surround-view camera, and blind-spot monitors.

Even though it’s lithe, sexy, fun to drive, and practical, the XF Sportbrake won’t make many American buyers abandon their beloved crossover SUVs. Wagons make up a tiny percentage of the car market in the U.S., and no single car is going to do much to change that. Nevertheless, the XF Sportbrake is a solid entry into a market that is lean on station wagons.

What's your take on the 2019 Jaguar XF Sportbrake?

Have you driven a 2019 Jaguar XF Sportbrake?
Rank This Car

Looking for a Used XF Sportbrake in your area?