After a wait longer than many models' lifetimes, an all-new generation of Infiniti QX returns for 2019 with a fresh look and the world’s first mass-production, variable-compression engine. 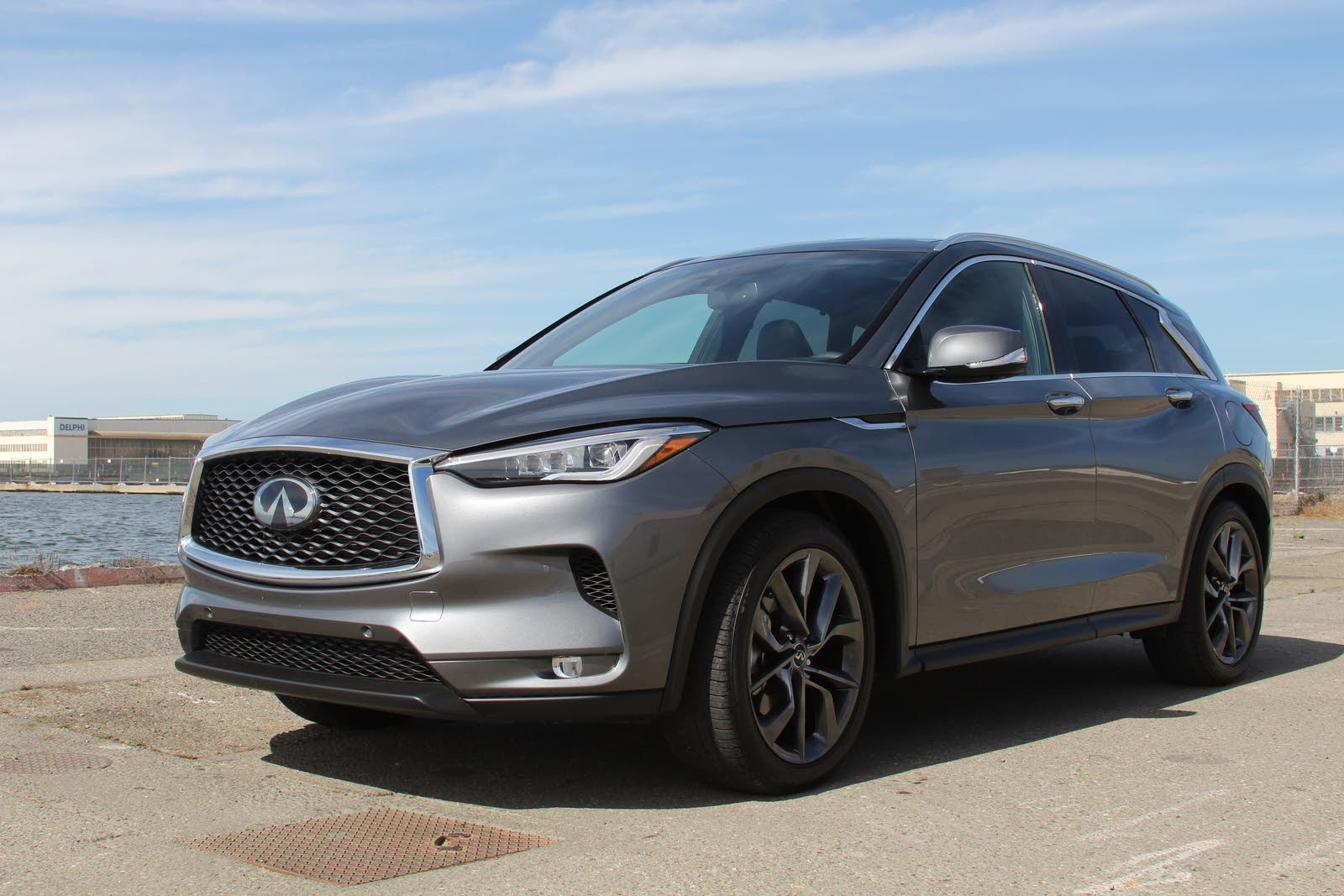 Introduced in 2007 (back when it was called the EX), the QX50 has sat nearly stagnant ever since, receiving slight changes and one refresh during a decade that saw small, luxury crossovers rising in stature to become a dominant class of vehicles in the industry. Finally, in its second generation, the 2019 QX50 shows up with more room, a new tech-savvy engine, and one hell of an impressive interior. 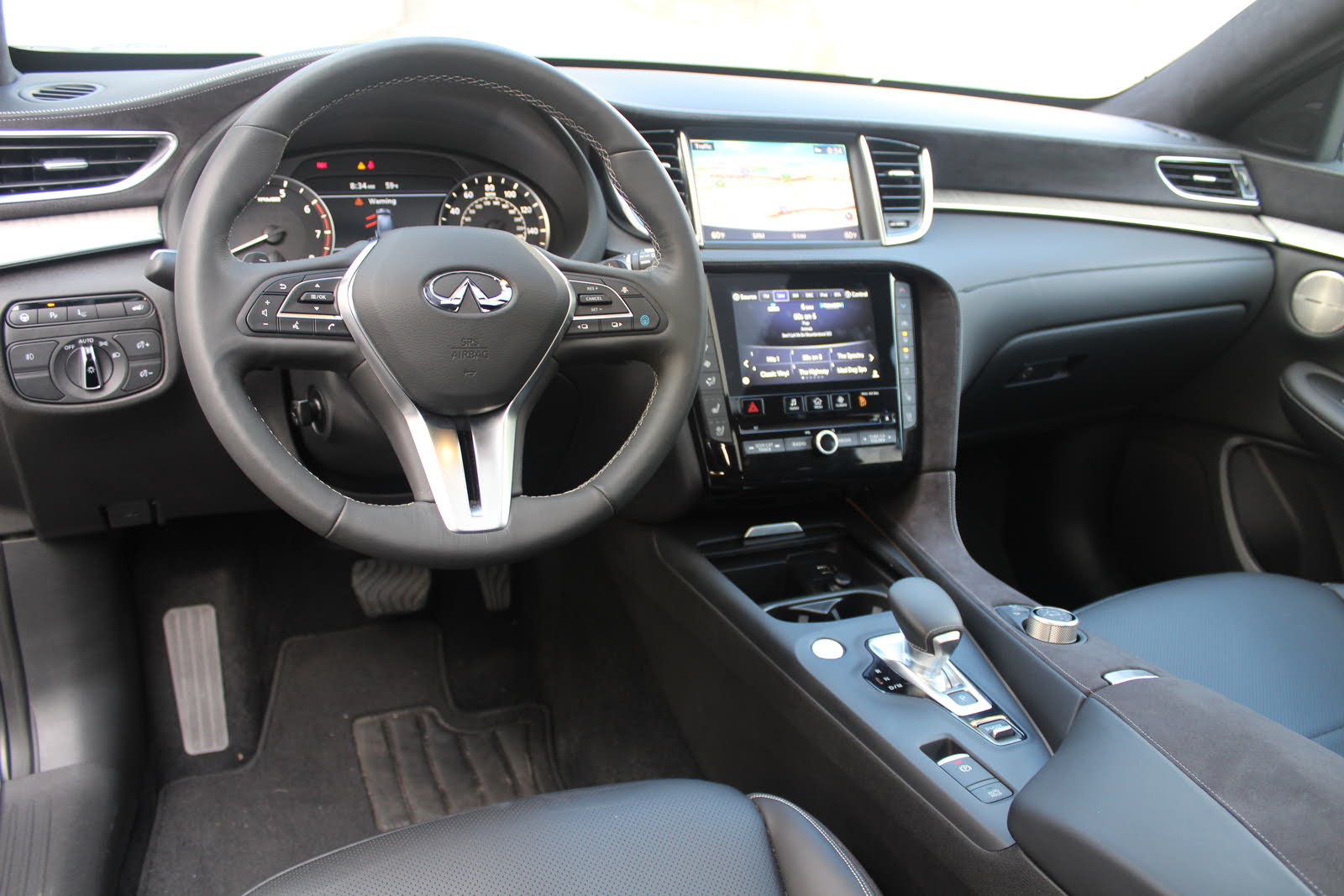 Wider and taller than last year, the now-front-wheel-drive QX50 offers two inches of extra ground clearance and more space inside as well. 13 more cubic feet, in fact, as the trunk now delivers 31.4 total behind some very modular rear seats that both slide and recline. And don’t think the engineers at Infiniti sacrificed rear leg room to accomplish that feat. I can still fit in the back without moving my preferred driver’s seat position, and at 6’4” that’s not something I can often say, though I will admit that the panoramic sunroof brings the headliner a little close to my head for comfort.

The interior has been redesigned as well, and it’s spacious, attractive, and full of high-quality materials and a new infotainment system. Plus, it’s quiet. Very quiet. Part of that is due to a noise-cancelling system, but it’s not all down to the technological. Regardless, normal conversations at highway speeds are a breeze and a joy.

Starting with the base “Pure” trim, the QX50’s $36,550 is not a bad deal, especially considering how well equipped it comes. LED headlights, hands-free liftgate, keyless ignition and entry, dual-zone auto climate controls, power front seats, and a forward-collision warning and mitigation system with auto emergency brake are all standard.

Move up to the “Luxe” trim and you’ll be treated with LED fogs to compliment the headlights, a panoramic sunroof beneath some slick roof rails, an auto-dimming rearview mirror, and a blind-spot monitoring system. All this justifies the $39,400 MSRP, along with available heated front seats—the only option you can get here.

I spent a week with the top-tier “Essential” trim. At an MSRP of $43,350, it’s a substantial jump from the Luxe, but the mostly technological additions certainly balance that expenditure. Here you’ll enjoy navigation, 3-zone climate controls, auto wipers, parking sensors front and rear, a 360-degree camera, heated side mirrors, and in a slight nod to luxury, actual leather seats to replace the synthetic material from the lower trims.

More importantly, this is the only trim where any coveted options can be added. Prime among them is the $7,500 Sensory package that gets you tech like heated and cooled seats, a Bose stereo, an upgraded climate-control system, adaptive LED headlights, a memory system, a power liftgate, and aesthetic enhancements like 20-inch wheels, upgraded leather, the suede trim and headliner, and open-pore wood and metallic trim. Perhaps more important are safety packages that get you some of the autonomous safety systems, and ProPilot assist—a mild autonomous system that will let the car steer, accelerate, and brake itself in a single lane. It actually works quite well, and it’s a life-saver in stop-and-go traffic that would otherwise have me pulling my hair out.

There’s also a tow package that’ll increase the rating to 3,000 pounds, and Infiniti's Premium Heat package, which adds heated front seats, a heated and power-adjustable steering wheel, and driver's seat memory settings. And you can add all-wheel drive to any trim for $1,800. 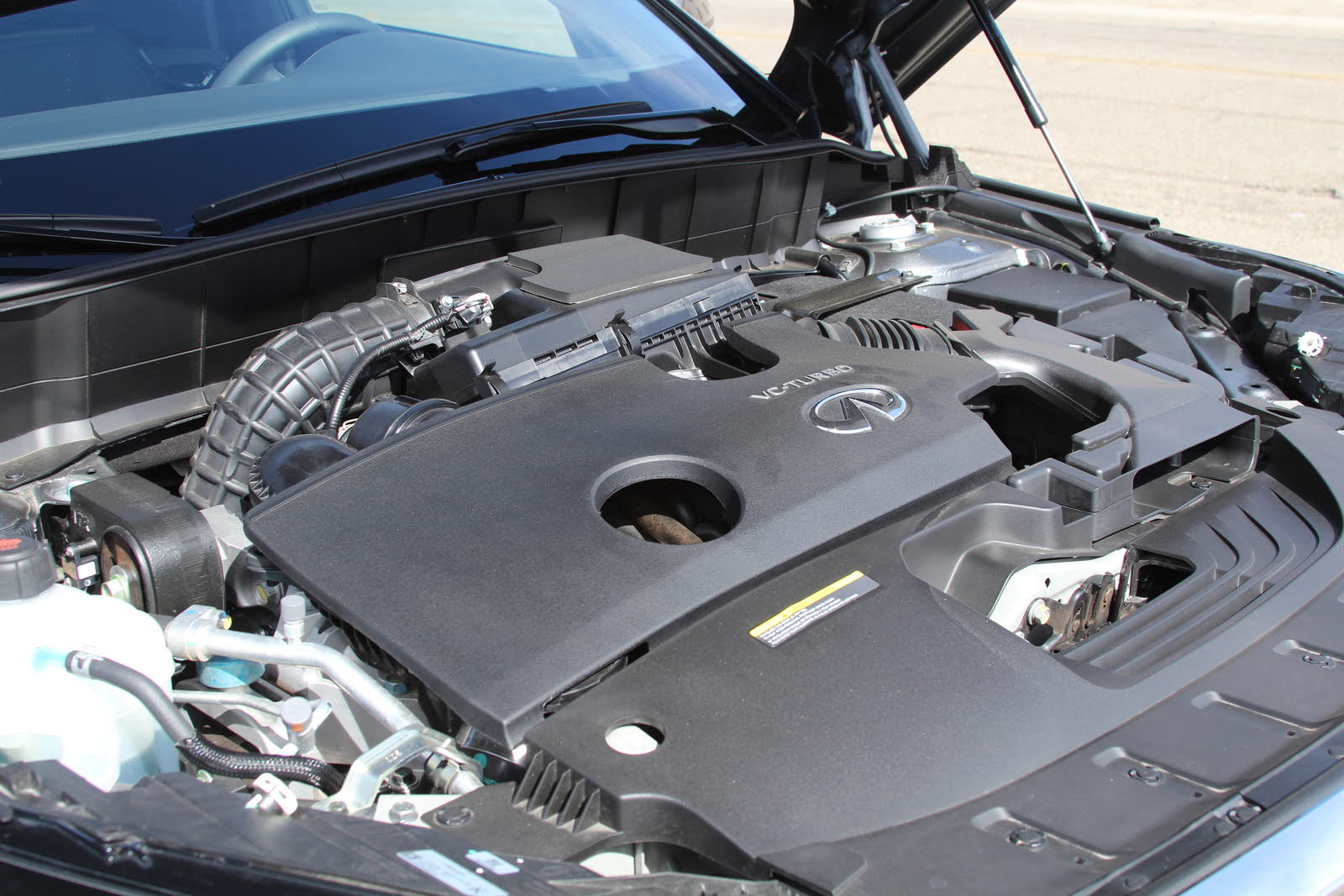 But with all that, we still haven’t touched upon the best, and worst, parts of the QX50. The bit that’s getting all the press is the engine—a turbocharged 2.0-liter 4-cylinder that Infiniti boasts is the world’s first mass-produced, variable-compression engine. With an actuator arm connected to a multi-link on the crank, the engine is able to change the height of the piston at top dead center, allowing it to change the stroke of the engine on the fly. This means the compression can vary between 8:1 and 14:1, depending on if it’s aiming for maximum power or efficiency, which is quite the feat.

Unfortunately, the numbers aren’t quite as impressive as the concept. The engine's 268 horsepower and 280 lb-ft of torque mean a drop in hp but an increase in torque, although the power curve is wider here. Regardless, the 6.4-second 0-60 time is about a second slower than the outgoing V6. Worse than that, Infiniti has mated that engine to a continuously variable transmission that can’t seem to get out of its own way. Now to be fair, I’m no fan of CVTs in the best circumstances, but this one is the worst I’ve experienced. It just doesn’t know what to do with the power. From a stop, anything more than mild input from the accelerator means bog, then surge, then wheelspin. And the thing sounds like a dying animal, moaning and groaning as you’re just trying to accelerate down the road like a civilized person. At least it knows what to do on the highway, where power comes on quickly and predictably. But around town, it’s a mess—skipping gear ratios back and forth.

The real shame is that the reason manufacturers compromise and go with a CVT is for the extra efficiency, and the sad fact is that the EPA-estimated 24 city and 31 highway miles per gallon aren’t exactly setting the world on fire. In fact, it barely beats out most competitors’ traditional turbo-4s. With a combined rating of 27—and my real-world-test figure that I couldn't get over 24—that’s just not much of an advantage, even though it’s 35% more efficient than last year's engine, and is supposedly the most efficient non-hybrid option in the class. And don’t forget, if you add AWD for $1,800, you’ll lose another MPG.

Additionally, the ride has drifted more toward comfort than any sportiness. I don’t think this is a bad thing as the QX50 soaks up corners and road imperfections with equal poise. No, my real issue is with the steering. My QX50 had the Direct Adaptive Steering (DAS) that I hated so much on the Q60 I tested. There’s no mechanical connection between steering wheel and tires, and at low speeds, it feels like a steering-wheel controller for a racing game from 1993. Effort does build with speed but it’s not consistent and it modulates strangely at times. I couldn't get used to it. Thankfully, you only get DAS if you go for the ProACTIVE package, so it can be avoided. 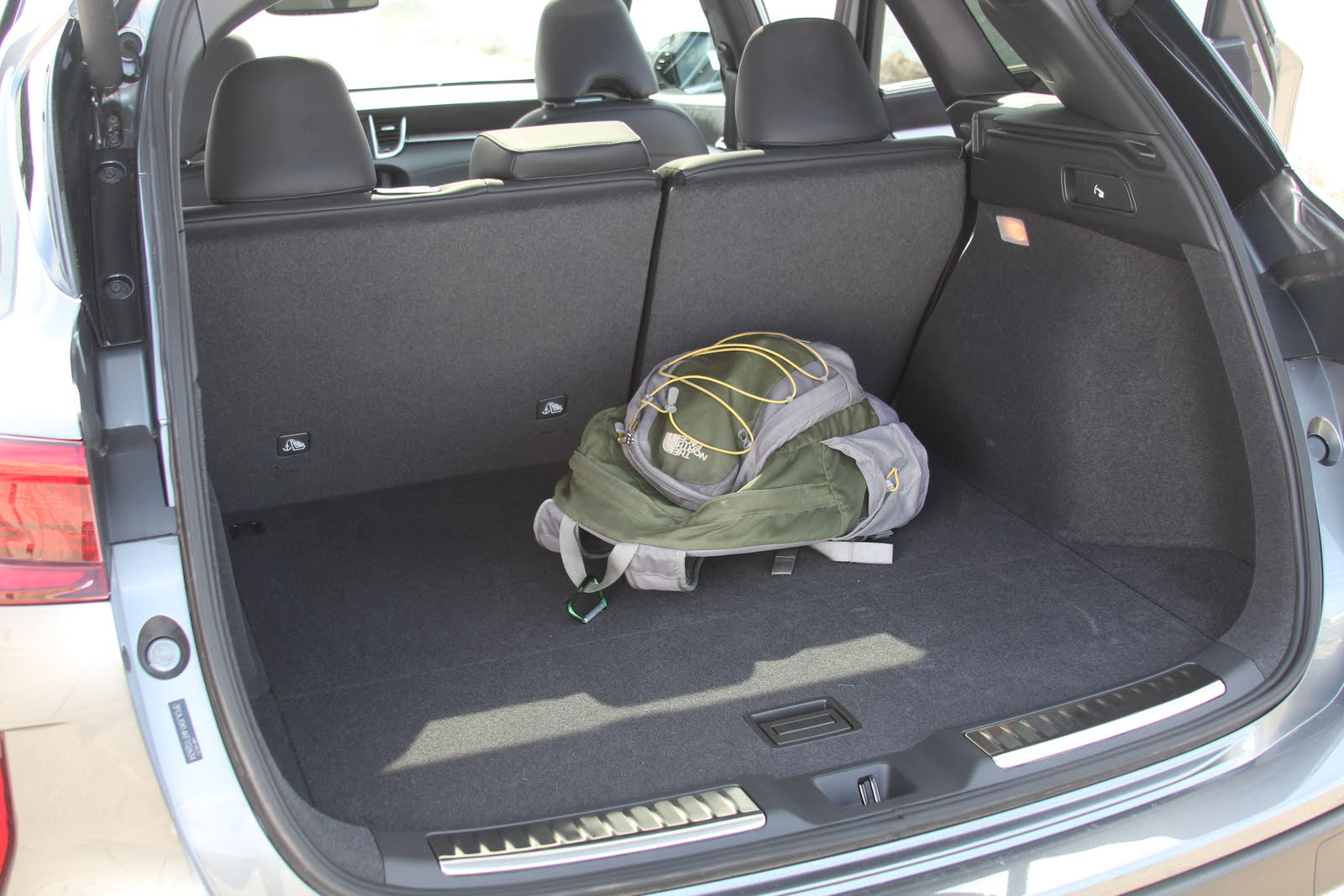 I hate having to say it because I say it so often, but things here are a mixed bag. Infiniti offers some very nice interiors, and this is no exception. Fit and finish are very high quality, materials are pleasing to eye and finger, and there’s plenty of room. But there are some serious gripes as well.

First, there’s just too much going on here. Infiniti isn’t the only (or even the worst) offender in this category, but we’ve been stuffing so much new tech into cars the last 20 years, it seems most manufacturers haven’t taken the time to sit down and really think about how to present all this tech. The result is that 3 screens are now nearly standard and any given car is going to give you the option of buttons, dials, touchscreens and more just to control everything. There are times when you think you’ll be using the touchscreen, but it’s really the rotary dial you need to work with, inexplicably. And the reverse is true as well. It’s all just a bit confusing and it makes the dash look quite cluttered. As I said, Infiniti isn’t the only guilty party, but it still needs to be called out.

Additionally, the infotainment system isn’t up to snuff. There were many input delays that would result in the screens not switching over quickly enough and registering touches on the screen from a previous page that would then cause the system to backlog inputs and then quickly rush through many options I never intended on pressing. Most of this was in the navigation system, so if you opt to navigate via your phone, this won’t be an issue.

Finally, a special note needs to be made of the shifter. For some reason, Infiniti has taken the “PARK” position and instead created a button for it behind the shifter. I can’t imagine the benefit of that, and I can guarantee that when you’re driving it, at least once you’re going to pull into a parking spot, put it into what you THINK is Park, and end up in Reverse. So get ready for that little adrenaline rush. I don’t have a problem with change, but why create a safety concern like that with no apparent benefit? 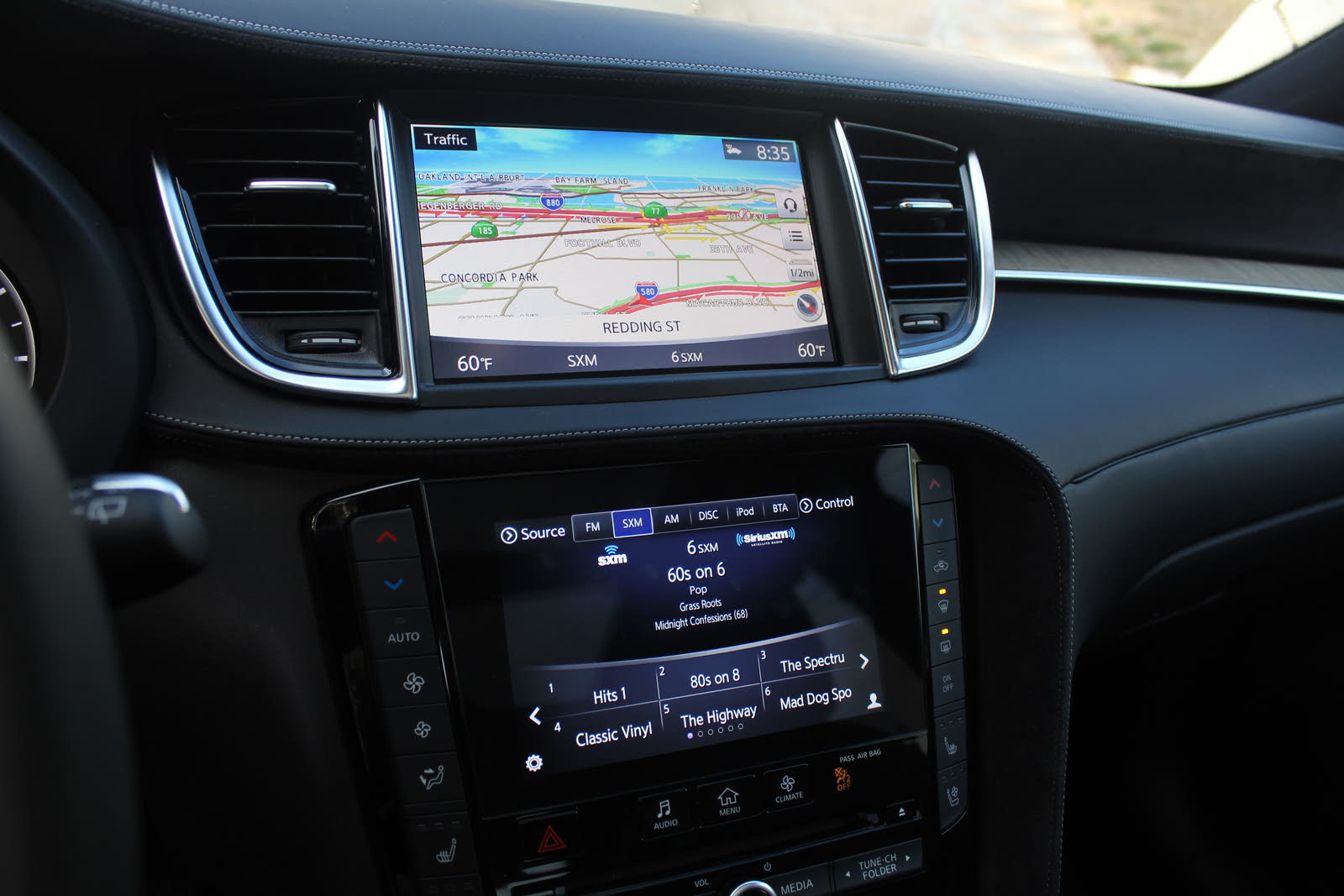 If you want all the latest tech, and especially safety tech, the QX50 has you covered. The $2,000 ProActive package includes intelligent cruise, blind-spot intervention, and lane-departure warning and intervention, plus ProPilot assist. But you have to be willing to pay for the top-tier Essential trim to get this, and that’s a shame. Sure, a $36,550 MSRP is attractive, but if you want to touch any of the autonomous safety you’re looking at a minimum starting price of $45,900. Add in the frustrations of the infotainment system, and things start looking a little bleak.

Thankfully, outside the safety systems, even the base QX50 comes well equipped when it comes to technology, though even without those optional systems, it’s the Essential’s list of standards that will really attract some attention. 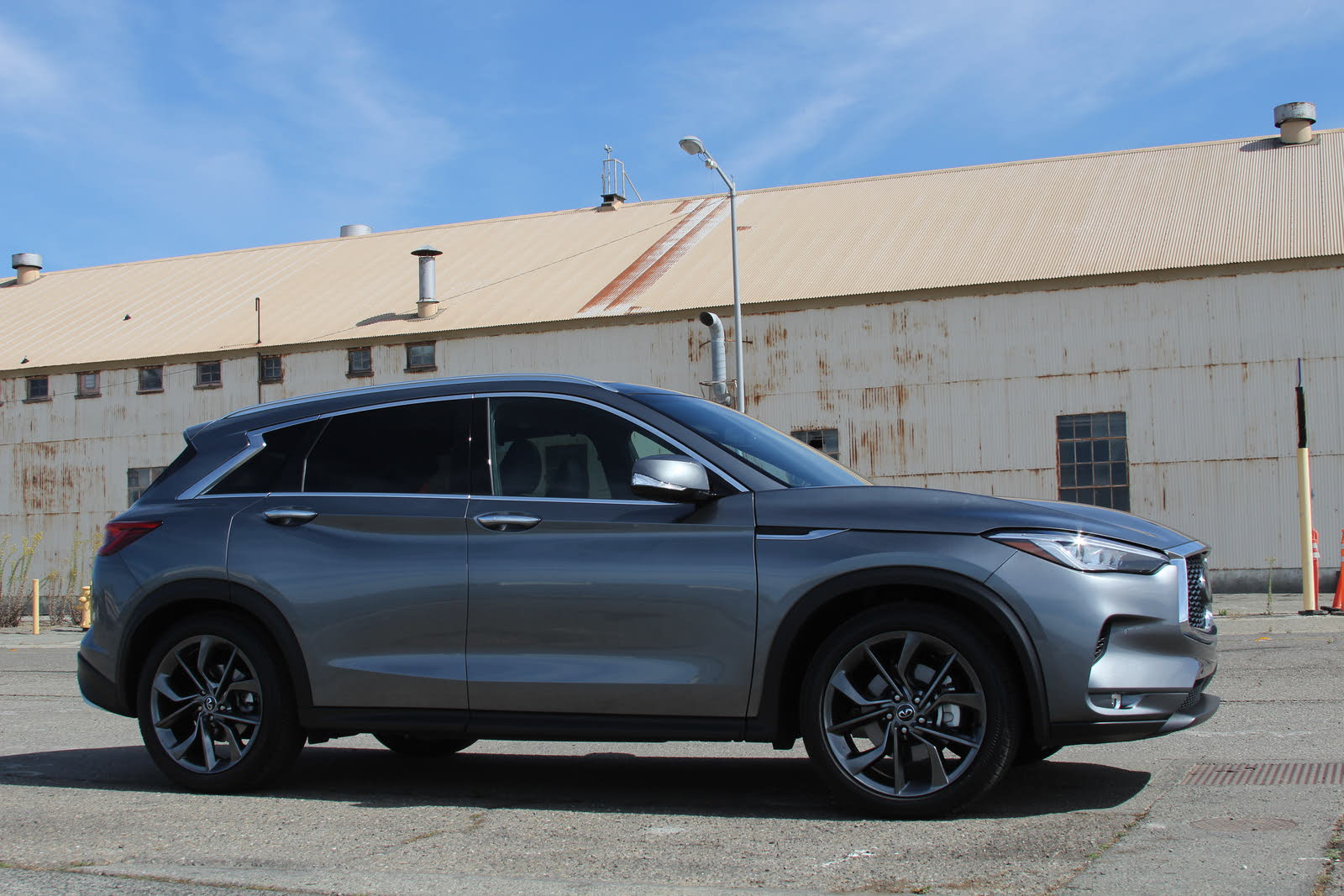 Beyond the safety systems we’ve already discussed, it’s hard to discuss safety with the QX50. I’d like it if the safety tech was available for all trims—even the BSM system isn’t available for the Pure—but otherwise, the QX50 has yet to be tested by the government’s National Highway Traffic Safety Administration or the independent Insurance Institute for Highway Safety. 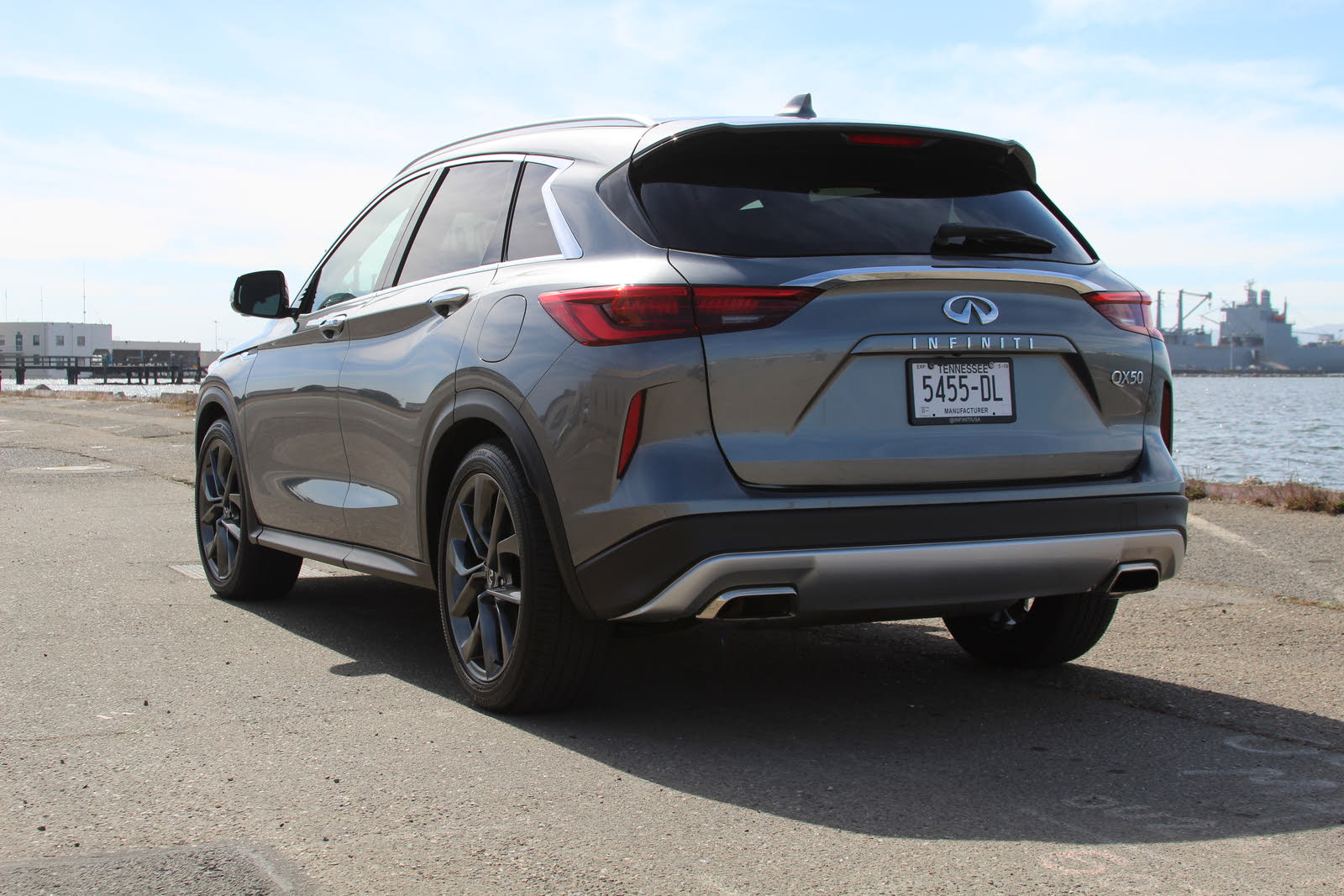 At $36,550, the QX50 is a hell of a deal, as long as you can live with the CVT. At my test vehicle's $55,285 price, I’m not sure I can say the same—especially with a new, unproven engine powering the party. Personally, I’m all about simplicity in design, but this new engine may still turn out to be quite robust. It just depends on if you want to be the guinea pig in this experiment.

GuruW8R5Q Is the moonroof laminated glass?

Users ranked 2019 INFINITI QX50 against other cars which they drove/owned. Each ranking was based on 9 categories. Here is the summary of top rankings.

What is the best leasing offer you've seen and what should I expect to pay monthly for leasing a 2019 Infiniti QX50 Essential AWD with great credit?