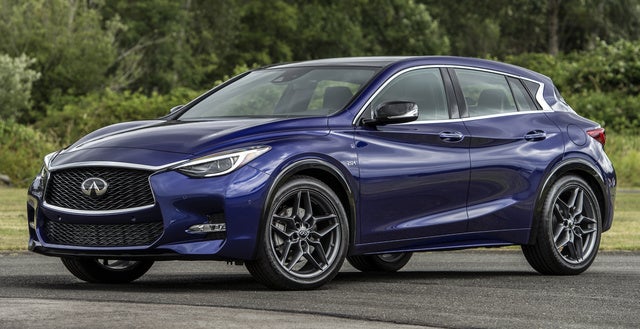 Looking for a Used QX30 in your area?

The QX30 runs strong with hatchback DNA, and even has some coupe-inspired body lines. The front end has the INFINITI corporate fascia, along with a scalloped grille and sharply raked headlights. Crisp body lines emerge from either side of the hood, moving over the front fender and into the rear door panel. Above the rear fender, the signature INFINITI reverse curve in the C-pillar frames the rear hatch. The QX30 doesn’t offer a power rear liftgate, which some might find disappointing. Lifting the hatch gives way to a respectable 19.2 cubic feet of cargo space.

It’s a sharp little hatchback, which is impressive when you consider there’s a Mercedes-Benz underneath those body panels. The QX30 is a re-skinned Mercedes-Benz GLA-Class… albeit thoroughly re-skinned.

In addition to creating an exterior that was unique from the GLA, INFINITI managed to created an interior with its own personality. Some Mercedes-Benz elements could not be avoided, like the climate control interface and the confusing shifter design, which are straight out of the GLA (the shifter specifically from the AMG GLA 45). The instrument panel, including the digital screen between the tachometer and speedometer, are also right out of the GLA. All of it comes together seamlessly -- but to the trained eye, these are some perplexing automotive mashups.

The majority of the center console design is purely an INFINITI creation. While other new INFINITI models feature the somewhat clunky InTouch dual-screen infotainment system, such integration into the GLA-based QX30 would have been rather costly. Instead, it features a combination of legacy infotainment technology and the current InTouch controller dial.

The dial is located down in the center console. It’s flanked by tactile buttons for maps, home, music, and cameras. Considering the InTouch system in other vehicles (like the Q50) require a steep learning curve, the simplicity of the QX30’s controllers is a welcome departure from INFINITI norms.

The QX30 Sport has its own unique look. That’s partly because the Sport was supposed be its own model. Several years back, INFINITI shook up the naming conventions for all its models. Sedans and coupes would start with the letter Q, followed by a number, while crossovers and SUVs would start with QX, followed by a number. The Sport was originally supposed to be simply the Q30, and positioned as a hatchback, but with the naming convention, it brought it under the QX crossover umbrella. Just know that driving the Sport is much more car-like than the other trims (including a slightly lower ride height) because it is a car.

Regardless of trim, the 2019 QX30 comes standard 2.0-liter, four-cylinder turbocharged engine. It makes 208 horsepower, which is routed through a 7-speed dual-clutch transmission. Power is routed to the front wheels, or available all-wheel drive.

The QX30 comes standard with a full array of front and side impact airbags, traction control, and a reversing camera. For 2019, the previously available technology package has been rebranded as the ProAssist package. It features driver assistance features such as lane departure warning, automatic high beams, adaptive cruise control, and intelligent park assist.

Looking for a Used QX30 in your area?