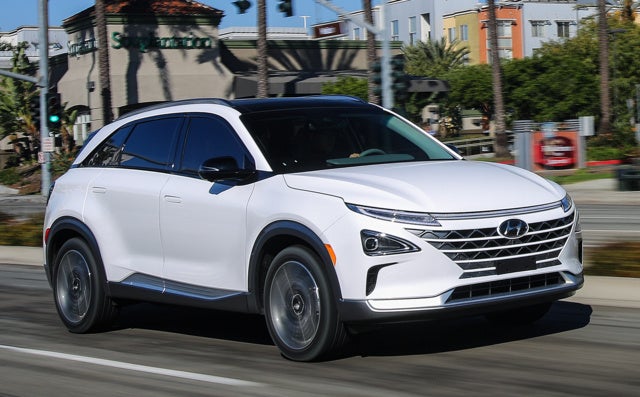 Looking for a Used Nexo in your area?

While trends head toward battery-electric vehicles, automakers aren’t hedging all of their alternative-fuel bets there. Various manufacturers have conducted experiments with limited-production hydrogen fuel-cell vehicles. Hyundai started selling a fuel-cell version of its Tucson, called the Tucson FCEV, in 2014. Now, for 2019, the company has introduced an all-new fuel-cell crossover, the Nexo. Unlike the Tucson FCEV, the Nexo is a unique model riding on its own architecture, which Hyundai claims makes it lighter and more space-efficient. Dimensions are up in every direction. Length increases by 10.3 inches, width by 1.5 inches, and wheelbase by 5.9 inches in comparison to the Tucson FCEV.

From the outside, the Nexo is striking. The front features an interpretation of Hyundai’s latest crossover design language. Daytime running lights are mounted high, while the actual headlights are mid-level on the bumper. There’s a strong linear theme with a full-width light bar just below the hood’s edge and horizontal lines running across the grille. Other exterior elements are truly unique to the Nexo, including flush door handles, sweeping window line, floating roof, and metallic silver trim. It all adds up to a futuristic take on a modern crossover.

Inside the Nexo, things are a little more rectilinear, but still just as high-tech. The left and center of the dashboard are dominated by a dash with two LCDs, one serving as the instrument cluster and a larger one running infotainment duty. The linear motif is repeated with the silver trim piece that runs across the dashboard, which includes the cabin vents with even horizontal grooves. Hyundai uses a simple two-spoke steering wheel. The center stack is more flat than vertical and floats above the console. The back seat is more conventional and seats three, making the Nexo a five-seater.

The Nexo also increases performance over the Tucson FCEV. The 95 kilowatt fuel cell and much-larger 40 kilowatt battery power a 120 kilowatt electric motor for 160 horsepower and 291 pound-feet of torque, improvements of 26 hp and 70 lb-ft. A full three seconds has been shaved off the zero-to-sixty time, leaving 9.5 seconds. Range on the Tucson FCEV was 265 miles, but Hyundai estimates the Nexo can do 370. And, the Nexo can be refueled in around five minutes. Despite these improvements, the entire powertrain package takes up less space. The battery, for example, has been relocated to the cargo area for greater occupant space.

Keeping up with its expectations as a technology showcase, the Nexo will be offered with several advanced driving capabilities. One of these is a new blind-spot view monitor system, which provides a wide-angle camera feed of either side of the vehicle while changing lanes. There is also an adaptive cruise control that uses sensor and camera data to accommodate speeds between 0 and 90 miles per hour. An automated parking assistant, like those found in much pricier cars, can park with or without a driver in the front seat.

Despite owning the fuel-cell crossover segment, the 2019 Hyundai Nexo makes measurable improvements in every category versus its predecessor, not to mention the sharp and distinctive styling.

Have you driven a 2019 Hyundai Nexo?
Rank This Car

Looking for a Used Nexo in your area?

Hello do you guys do leases. Or just finance