Honda resurrects a 1990s name for this familiar rendition of the traditional 2-row SUV. 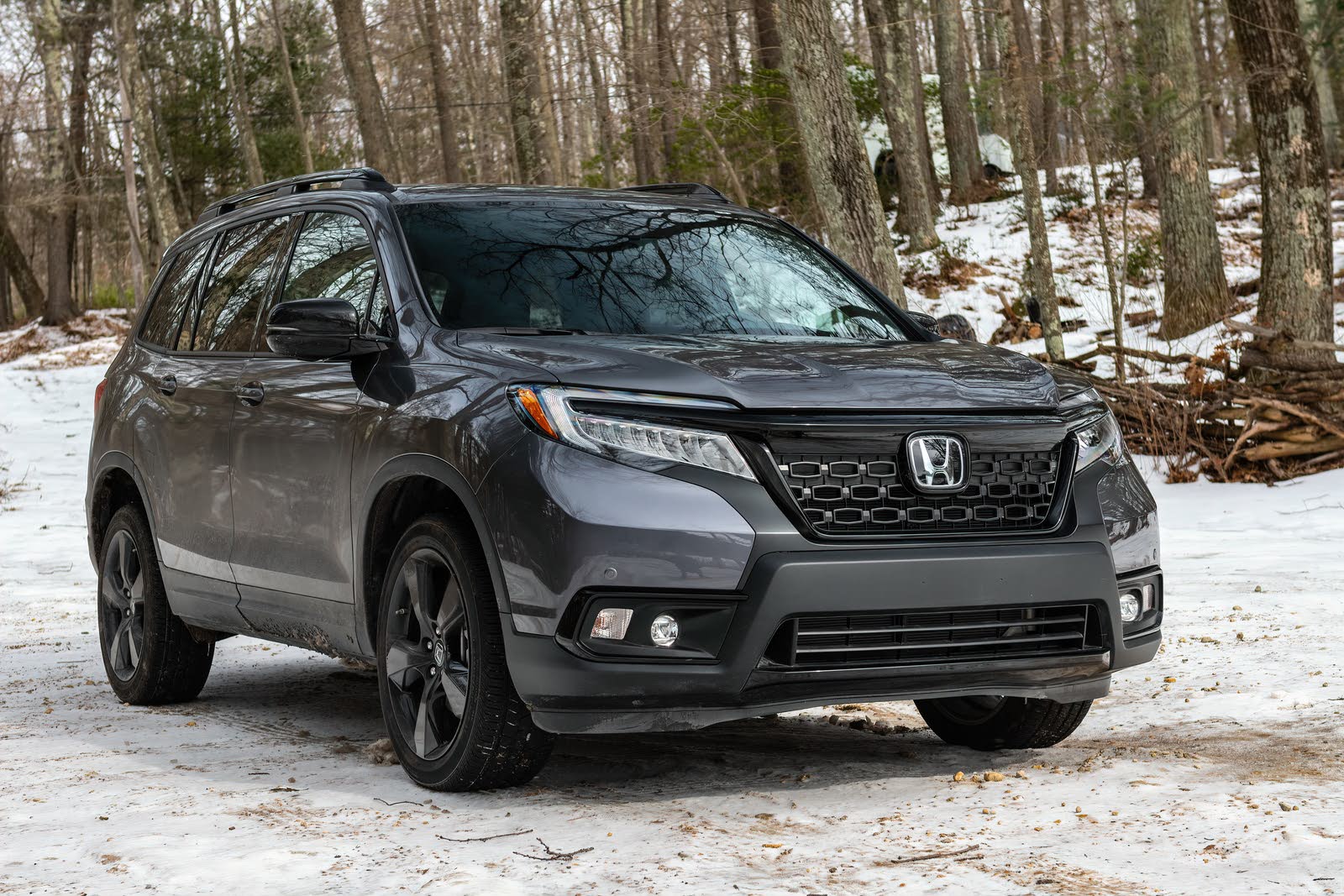 With four SUVs currently in its lineup, it may be hard to imagine, but there was a time when Honda had no idea how to build one. In 1993, Isuzu did the hard work, offering its body-on-frame Rodeo, which Honda rebadged as the Passport until 2002. Today's modern Passport is a Honda Pilot without a third-row seat, and like the Pilot (and the Ridgeline pickup), it's based on the Odyssey minivan chassis. And despite being tailored to families and outdoorsy types, the Passport is one of the most simplistic, unadorned new SUVs on sale. Offering basic transportation with gobs of space, all-wheel drive, and high ground clearance, the Passport hasn’t altered its original formula—and that's a good thing. 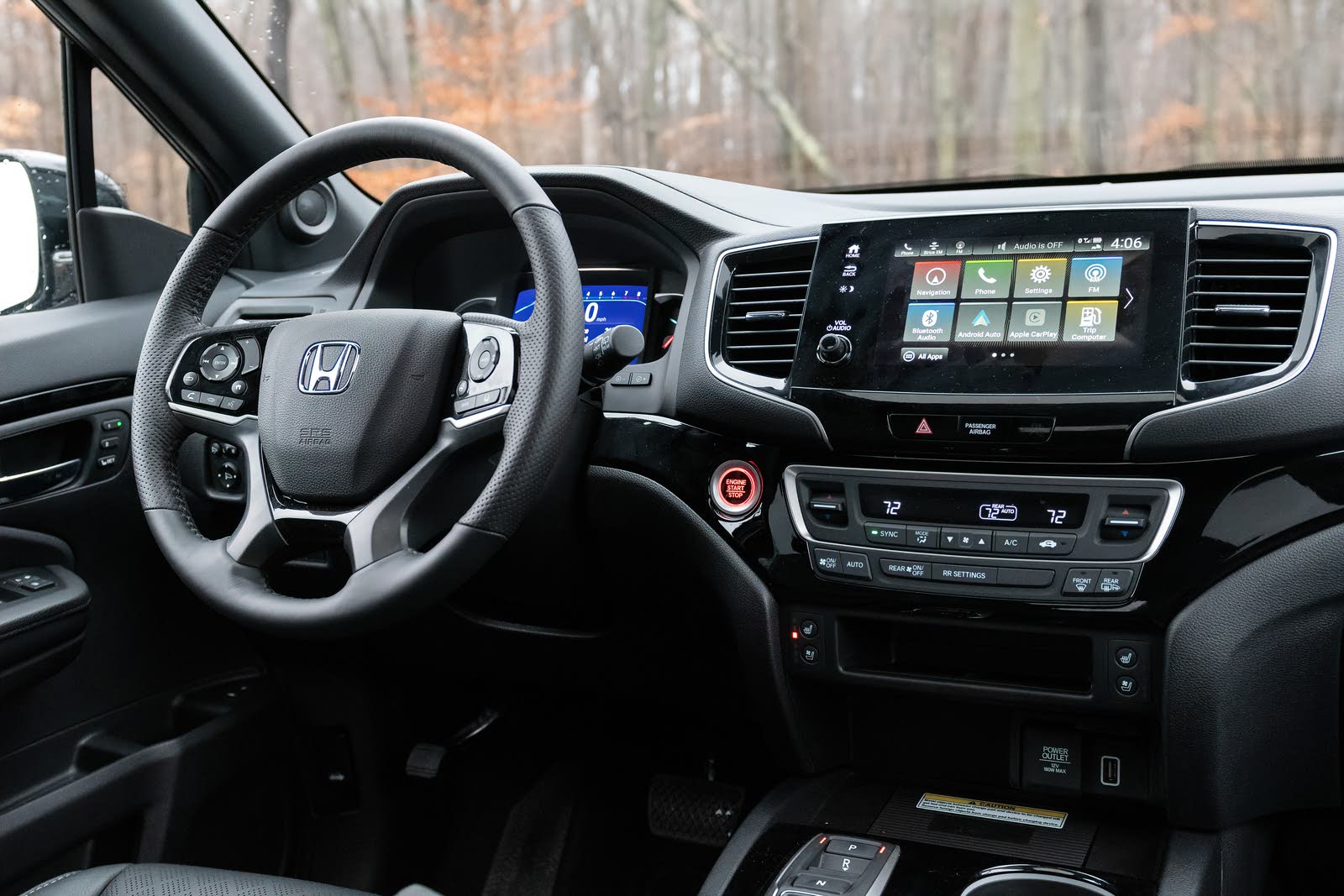 Honda's designers didn’t work overtime to convert the Pilot into a stubbier version. Although the Pilot is 6 inches longer than the Passport, their wheelbases are identical, as are the doors, windshield, and hood—basically everything forward of the rear-door cutline that forms the C-pillar. The Passport is about an inch and a half taller with a nearly 1-inch lift in ride height over the Pilot. From any angle, the Passport immediately looks boxier and more broad-shouldered than the Pilot’s minivan composure. An enlarged blacked-out grille, a restyled front bumper with new fog-lamp cutouts, gloss-black mirrors and window trim, and black 20-inch wheels come standard. Remove the Pilot’s inner taillights, extend the roof spoiler, and you've got a Passport. This vehicle's chunky proportions are from an era when SUVs didn’t mask the trucks underneath, even if the modern Passport’s off-road capabilities are more illusory than real.

Inside, the Passport is a Pilot once more, with an upright dash, a digital instrument panel, a glossy black touchscreen, and a smattering of switches. Fit and finish, like all recent Honda products, is above average and better than many entry-level luxury crossovers that cost as much but are half the size, like the Lexus UX. Soft and supportive leather seats—with flip-down armrests for driver and front passenger—sit tall and look down upon traffic. Forgive me, is this an old Land Rover? Parts of the interior feel just as dated, like the large cutouts for the mirror switches, the blind-spot housing awkwardly sandwiched between the front quarter glass and the door sill, and a foot parking brake that blocks your foot from easily resting on the dead pedal. The instrument panel looks like it could have come from a comic book, with temperature and fuel gauges visible to all of Times Square. I tested the loaded Elite trim level, yet the rear door panels were rock hard compared to the padded panels up front. Regardless of the old-school feel, as a non-luxury vehicle, the Passport's overall quality is high, and its style is both practical and attractive. 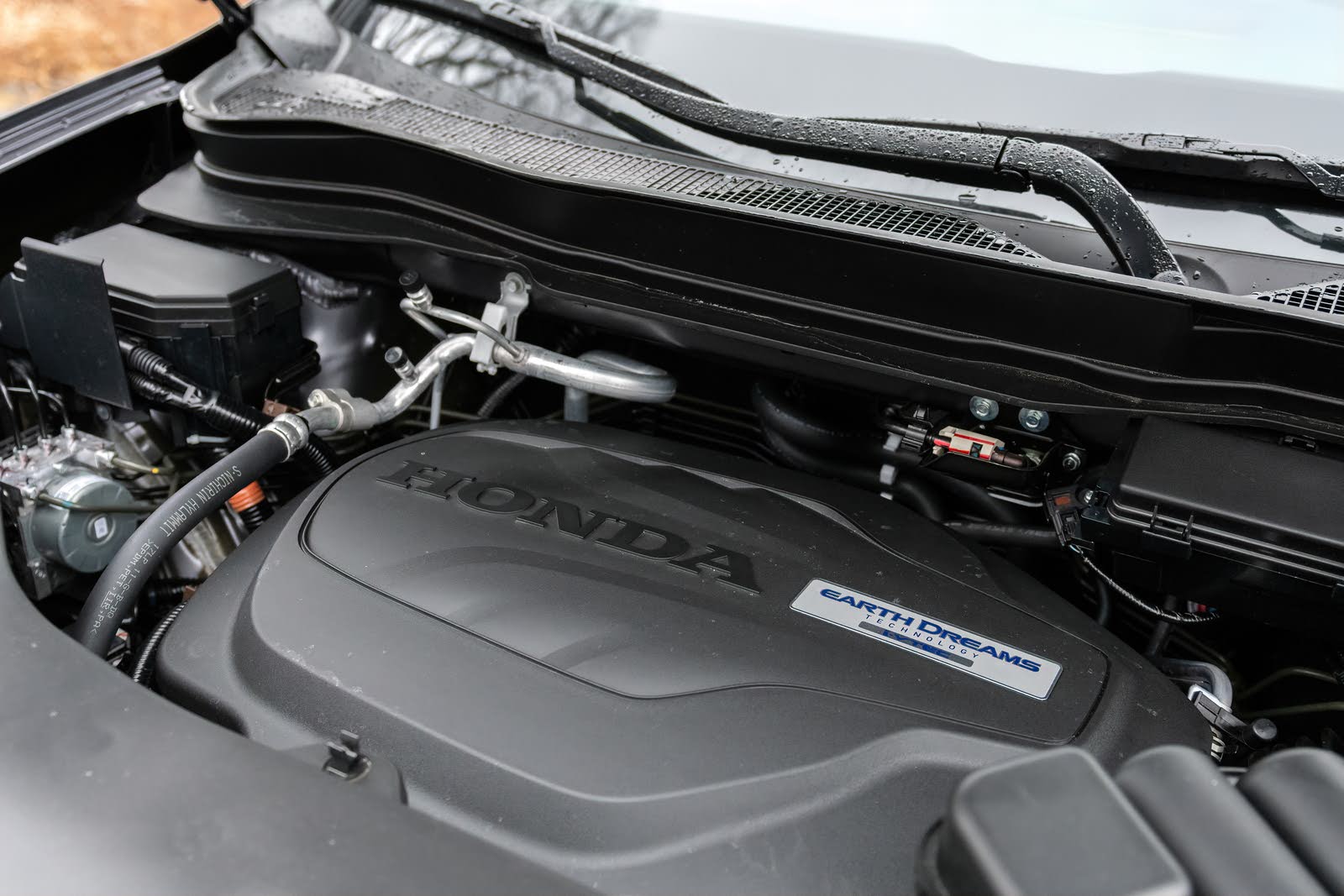 The Passport comes with a large, naturally aspirated V6 and a 9-speed automatic transmission connected to the front wheels, with all-wheel drive (AWD) optional on all but the Elite trim, where it’s standard. Not only does this streamlined approach make car shopping easier, but this Honda also blows away most of its 4-cylinder competitors. The 3.5-liter engine makes 280 horsepower and 262 pound-feet of torque, sounds great doing so, and straight-up hauls the mail in any situation. Activating Sport mode keeps the engine on boil and makes downshifting with the steering-wheel-mounted paddles a breeze. There’s no lag, just safe and predictable passing power when you need it. Unfortunately, like in the Pilot and all other vehicles using this 9-speed transmission (including Jeeps and Land Rovers), you may note an uncomfortable delay when manually downshifting from fifth to fourth gear. It’s as if the transmission slips into neutral, causing a momentary surge forward when you’re expecting the engine to slow the vehicle down. In ordinary driving in automatic mode, this isn’t an issue.

But that slip, along with overly light steering and a soft suspension, make the Passport less enthused about sporty driving than its eager engine suggests. It still has significant cornering grip for such a comfort-tuned, high-riding SUV, thanks to mechanical torque vectoring that can drive more power to the inner wheels. That noticeably sharpens handling. The Passport, though, doesn't like to be rushed. It'll tow up to 5,000 pounds (or 3,500 pounds without AWD), which is very strong in the crossover segment. All this capability and power means fuel economy suffers to the tune of an EPA-estimated 19 mpg city, 24 highway, and 21 combined in AWD models (FWD models are estimated at 20/25/22). Over 600 mostly highway miles, I averaged just 21 mpg. 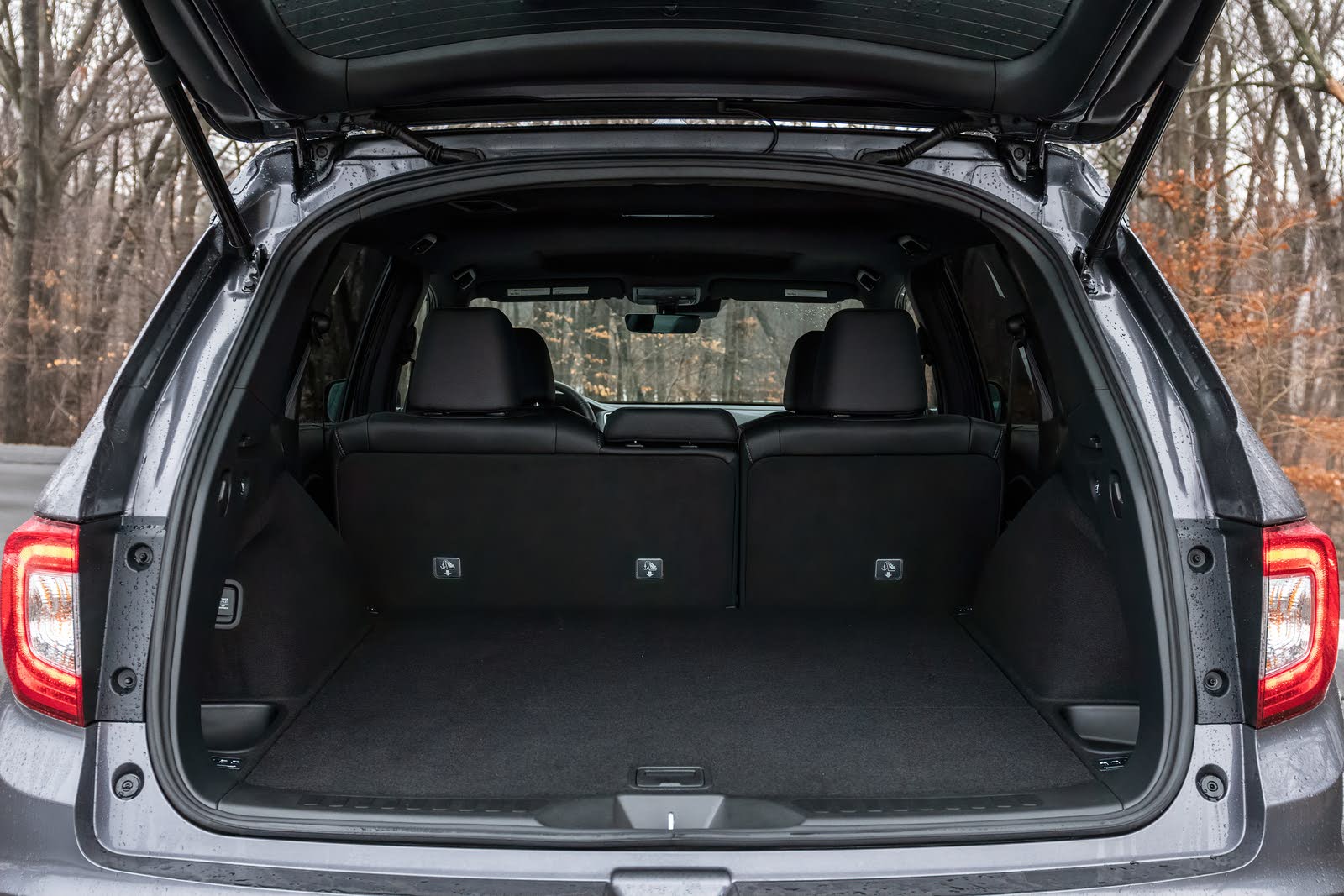 The Passport has space—lots of it. You'll find 41.2 cubic feet of storage behind the rear seats and 77.9 cubic feet with them folded, along with an additional storage bin underneath the cargo floor where the spare tire sits. It's incredibly airy, thanks to the tall windows and high seating position. Three-zone climate control comes standard, though I wished the rear seats reclined more than a couple degrees. My Elite treated rear passengers to heated outboard seats, additional USB ports, a household outlet, and manual window shades.

While the instrument panel looks goofy, it's very easy to read. You can switch displays from the steering wheel, so you can see the current audio track, navigation instructions, or watch the torque vectoring do its thing. Climate controls, along with buttons for driving mode, lane-keep assist, and heated seats, are logically placed. A deep center cubby has a sliding door to conceal large objects, and the sunglasses case on the overhead console can flip further to reveal a convex mirror, perfect for keeping eyes on the kiddos. The only issue is the infotainment screen and its surrounding polished black trim. Both smudge too easily, plus there are no shortcut buttons for the stereo, nav, or other functions like there are on the Accord. There is just a Volume knob. I'm getting used to the oddly shaped push-button, pull-tab gear selector, but first-timers should prepare for an adjustment. Otherwise, this Honda is as straightforward as a new car gets. 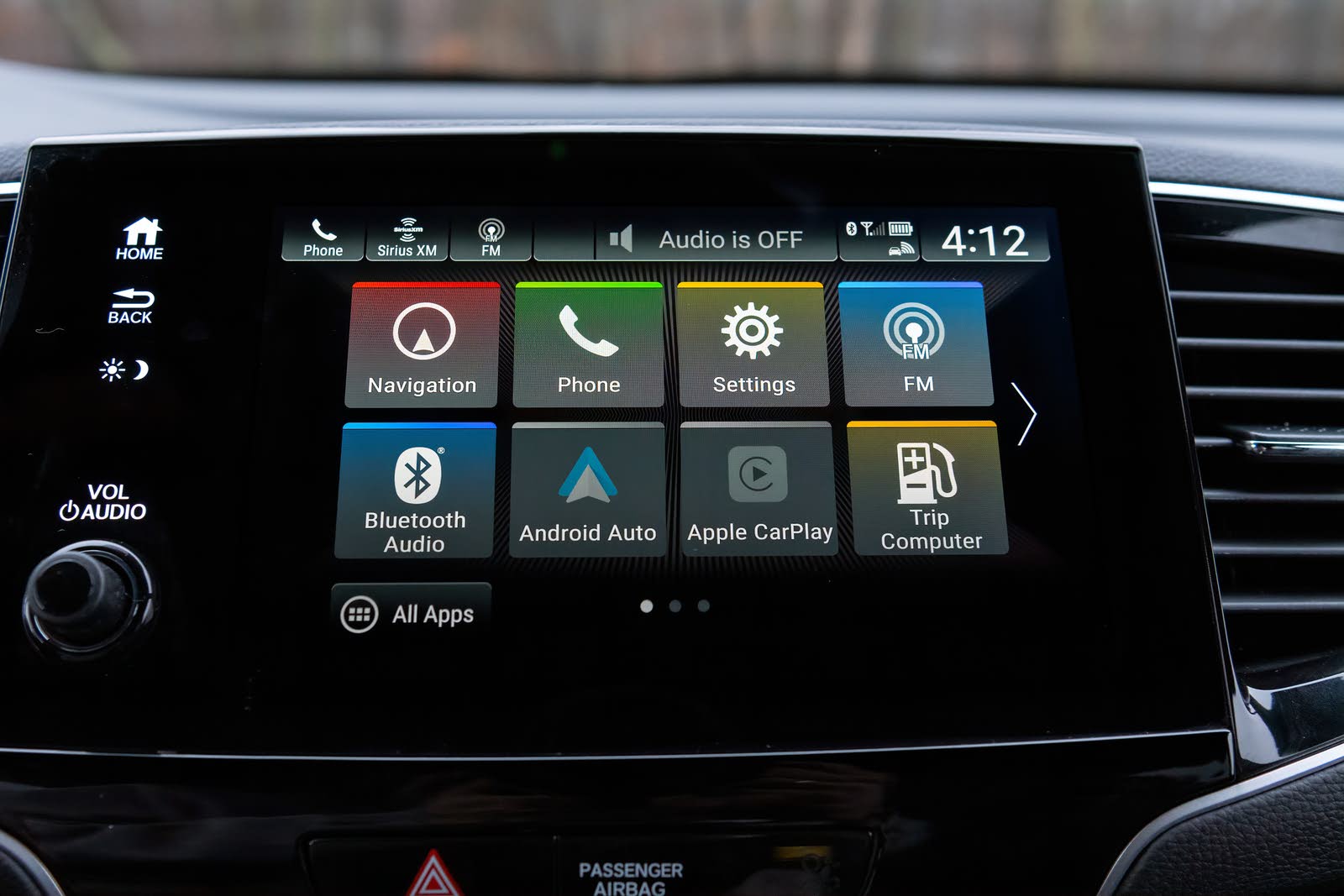 Honda doesn't let shoppers add packages to lower trims, so CarGurus recommends buying the EX-L, which is one tier above the base Sport. Doing so will remove the ugly base trim's screen and fit an 8-inch, high-res touchscreen with Apple CarPlay, Android Auto, and 4G WiFi in its place. The Garmin navigation is fast and easy to use, just like the rest of the infotainment system. It's also accurate, especially with voice, and the live traffic data with auto-rerouting is superb. It saved me a half-hour on my trip to Massachusetts to film our video review by expertly guiding me around a closed interstate. That's no easy task in backwoods Connecticut, but the Passport's nav made my drive that much simpler—and without having to resort to Google Maps on my phone. (You'll need the Touring, which is one rung above the EX-L, to get the live traffic data and the brighter, jeweled-looking LED headlights.)

Honda Sensing comes standard on all Passport models, which includes forward emergency braking, adaptive cruise control, and lane-keep assist. This is a capable semi-automated system on marked highways, although it's not able to hold the lane through tighter turns like newer systems from Audi, Mercedes, or Nissan. HondaLink, the company's suite of connected services, is standard but includes only alerts for recalls and maintenance alerts. You'll have to buy the Touring or Elite to receive stolen-vehicle tracking, automatic 911 dialing after a crash, geofencing, speed alerts, or remote unlocking via the smartphone app. The fact that Honda restricts its best tech to the top trims without making them optional on lower trims dinged the Passport's score in this category. 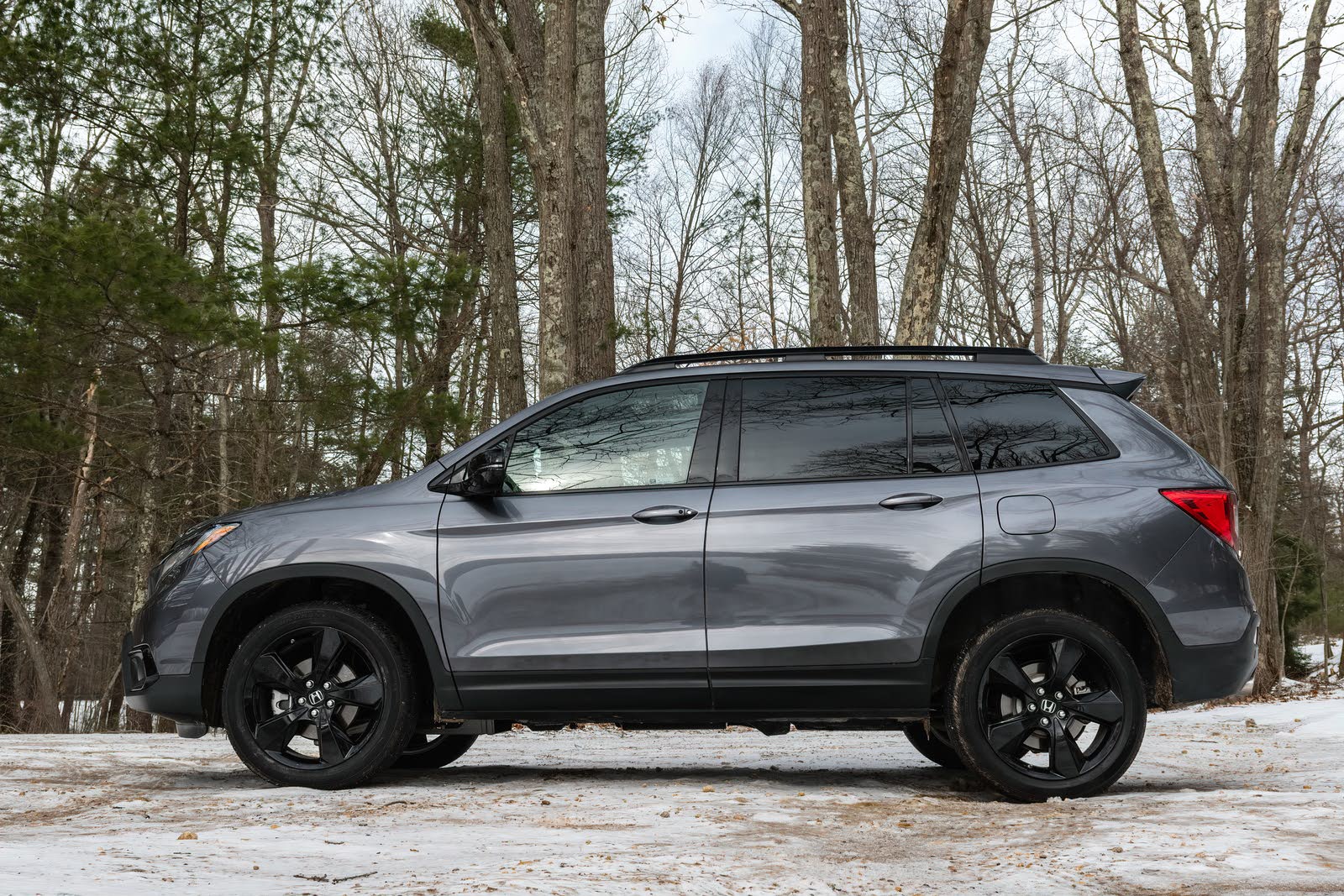 In addition to the Honda Sensing driver assists, blind-spot monitoring is standard on EX-L and above trims. The National Highway Traffic Safety Administration (NHTSA) has not rated the Passport overall since it has not verified the car's rollover resistance. However, it scored 4 out of 5 stars for front crash tests (4 out of 5 for the front passenger, 5 for the driver) and 5 stars in all 5 side-impact tests. The Insurance Institute for Highway Safety (IIHS) has not tested a Passport. It has tested the mechanically identical 2018 Pilot, to which it awarded a Top Safety Pick rating. However, the Pilot scored only an Acceptable rating for the passenger-side frontal crash test, which mirrors the NHTSA results on the Passport's passenger side. Considering it also lacks knee airbags, the Passport could use some improvement. 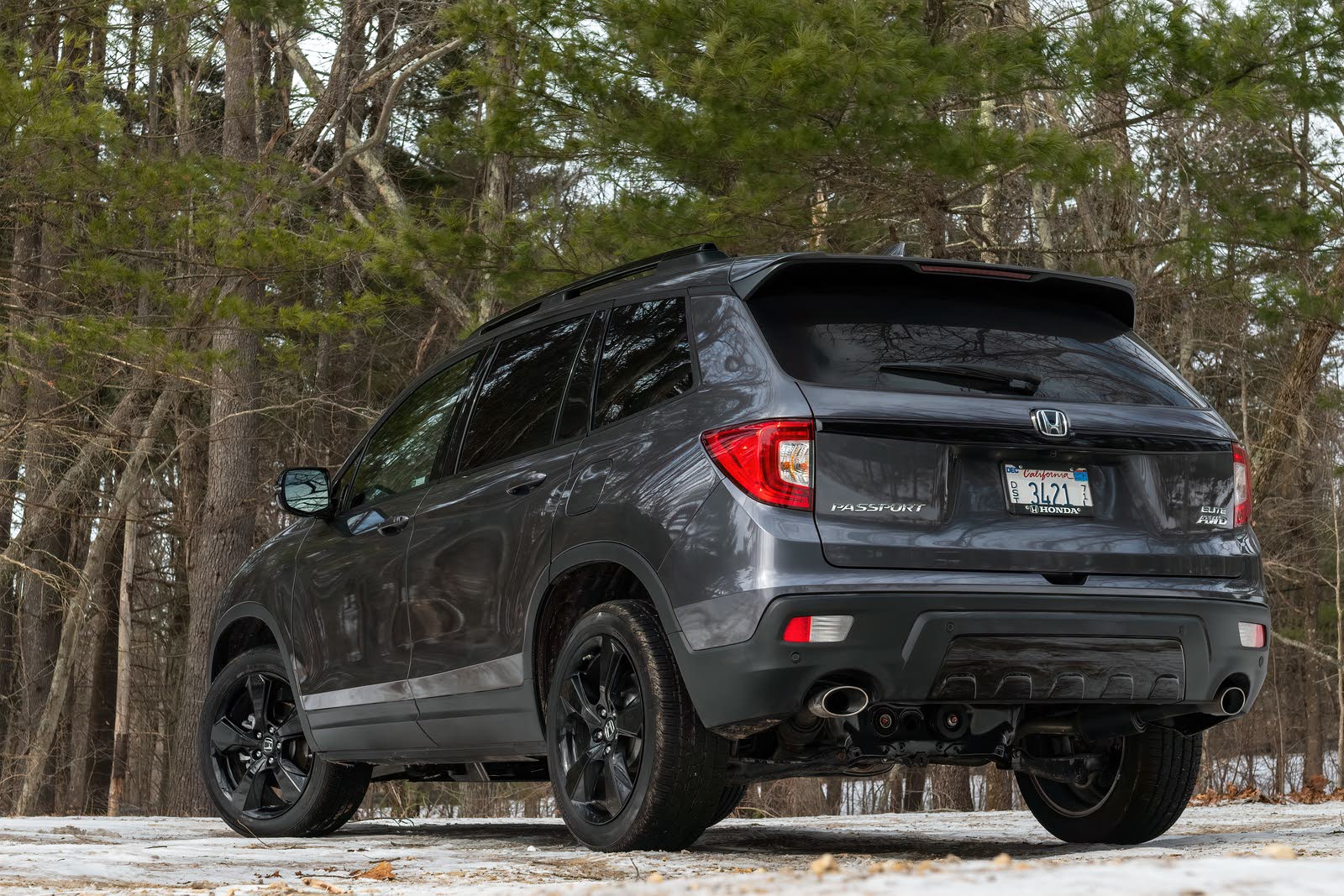 The 2019 Passport starts at $31,990 for the FWD Sport and ranges up to $43,680 for the AWD Elite, which is the vehicle I tested. With destination, the total price was $44,725. That's a few grand shy of the larger Pilot and too close to luxury SUVs we love, like the Acura RDX and BMW X3. Granted, those premium choices are smaller than the Passport. But the Elite trim is too much money for what's on display. That's why the Passport makes so much sense at the EX-L level, which is $37,455 with destination. If you can live without navigation, cooled seats, or a power tailgate, you'll find the Passport stuffed with value and enough amenities to make long road trips a breeze. The standard V6, torque vectoring, and driver assists are more than what competitors offer. At that price, for the enjoyment of a back-to-basics SUV like we remember, the Passport is a great choice.

What's your take on the 2019 Honda Passport?

GuruL813R I did an extended 24 hour test drive and found it frustrating that the dashboard reset every time I turned it off. I would set my dash to "Navigation" view, and when I started it up for my next trip the dash reset to the default and I'd have to reselect the Navigation view again.

GuruL813R Also - There's no 360 camera. It's a high vehicle and I'd like to see what's under my front bumper when parking.

Have you driven a 2019 Honda Passport?
Rank This Car

My 2019 Passport Wond Shif From Park Or Reverse It Keeps Going Back To Park...

431 views with 2 answers (last answer about a year ago)

What Does Dealer Price Mean

Do dealers offer prices below MSRP? Is dealer price the deaaler cost or the sale price?

How Do I Find Dealer Invoice Price?

Where do I find the dealer invoice price for a new Honda Passport AWD Sport?