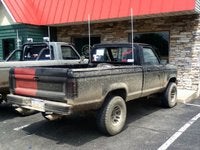 The Ranger returns to American shores with some impressive numbers and a very attractive price. 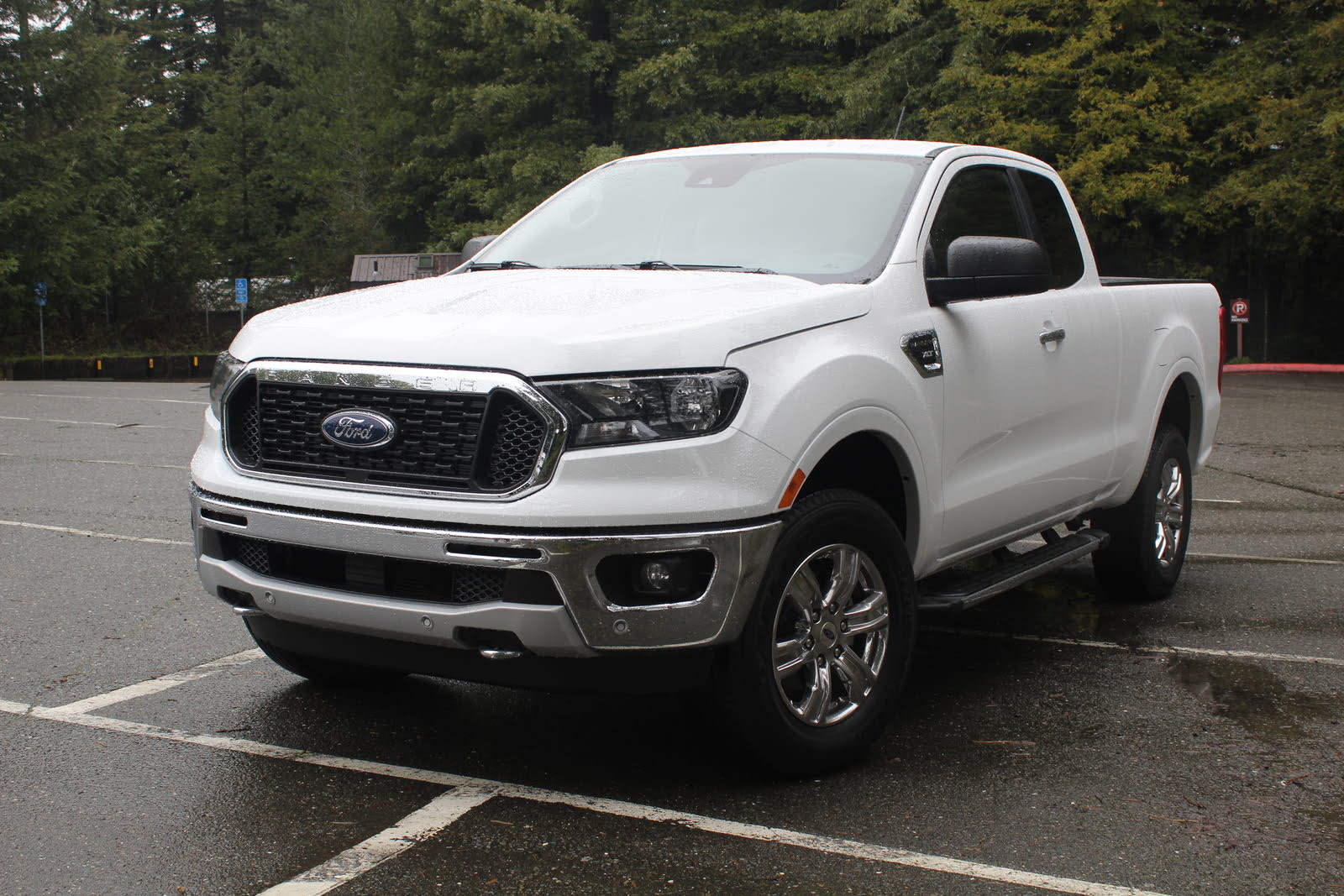 Everyone is talking about the all-new Ranger, but there’s just one problem: It’s not all new. The last Ranger was a staple of Ford’s lineup, but it was pulled from American markets in 2011, although it’s remained on sale around the world ever since. Refreshed for 2015, it’s now returned to the US to contend with the likes of the Chevy Colorado and the Toyota Tacoma, which haven’t exactly been relaxing during the Ranger’s absence. So, how does the Ranger intend to insert itself back into this already well-established midsize pickup category? Price and power. While the Colorado and the Tacoma both offer multiple powertrain options, Ford is leaning into its recent penchant for simplicity, offering a single engine and transmission: its 2.3-liter EcoBoost paired with a 10-speed transmission. 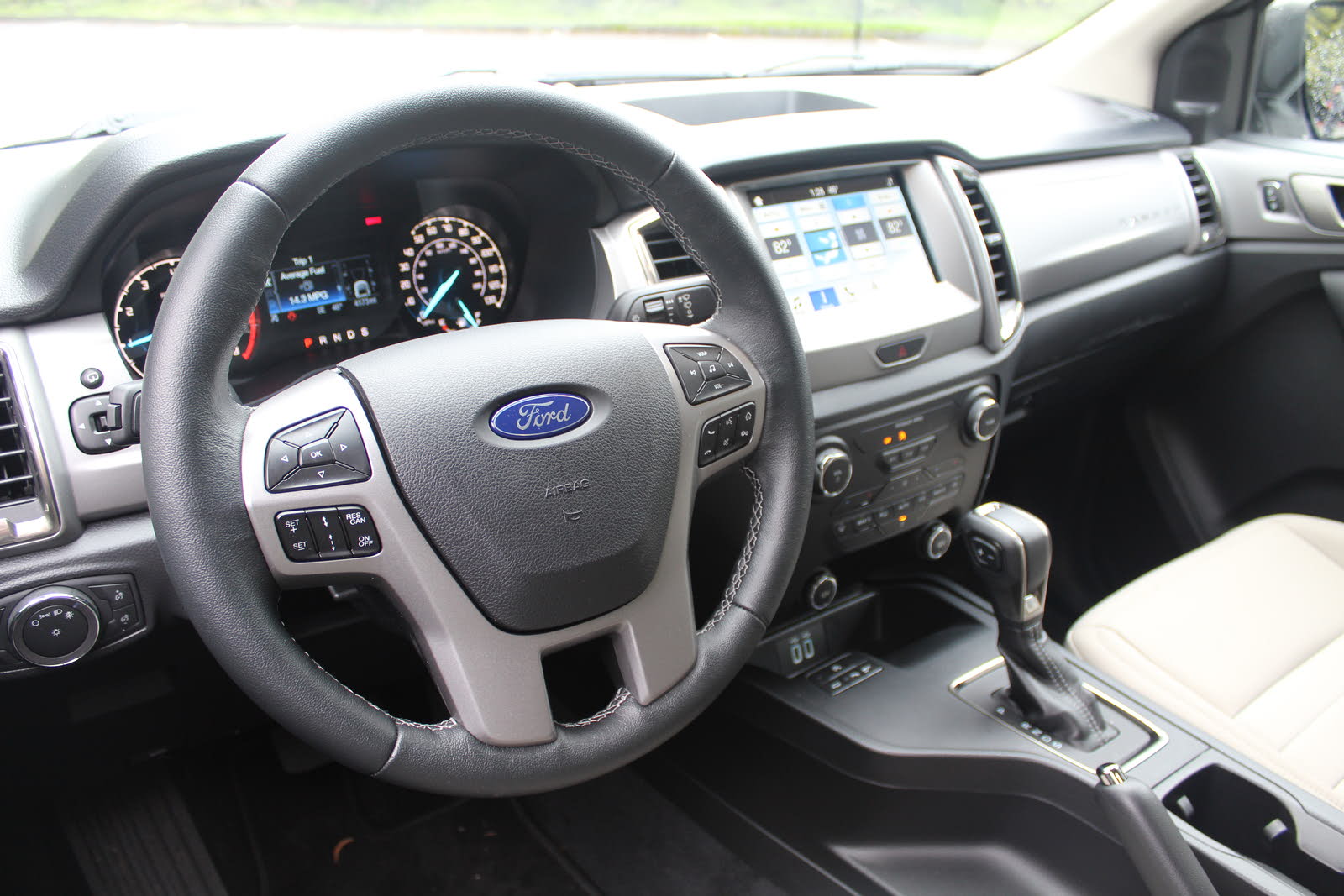 The Ranger may have started its life as a compact pickup, but it returns as a midsize that’s shockingly close to the dimensions its bigger brother, the F-150, sported when the Ranger last graced US shores. Thankfully, power has also increased to match its added heft. With an astonishing 7,500-pound towing capacity and an 1,860-pound maximum payload, the Ranger now comes within a couple hundred pounds of the V6 F-150’s numbers, and other than the much more expensive turbodiesel-powered Colorado, it’s an undisputed class leader. That’s thanks to the 2.3-liter EcoBoost engine’s 270 horsepower and 310 lb-ft of torque.

Ford has made some augmentations to the Ranger for the American market. Ford claims to have revised the sheet-metal stampings slightly in order to provide tighter panel gaps for the discerning American consumer, and to meet US regulations, the frame has been fortified to offer solid steel bumper mounts in the front and rear.

Now the big news here is price, as Ford is setting up the Ranger for fleet duty. In its cheapest—and most capable—configuration, the Ranger starts at just $24,300, and with the $495 towing package to unlock those impressive numbers mentioned above and a $1,195 destination charge, you’ll land at just $25,990. That’ll get you rear-wheel drive (RWD), a 6-foot bed, and the SuperCab configuration with rear jump seats. And while this is the base XL trim with some of the usual “base” features you’d expect, like steel 16-inch wheels, a manual-locking tailgate, cloth upholstery, and a spartan 4-speaker stereo, you'll also get a rear-view camera, USB port, and forward-collision warning with automatic emergency braking. Plus, there are some useful packages you can add here. Group 101A adds cruise control, power side-view mirrors, an anti-theft system, and a remote key fob that locks and unlocks the tailgate for $1,135. Or $735 will get you Ford’s Co-Pilot360 system with auto high beams, a blind-spot monitoring system with rear cross-traffic alert and trailer tow monitoring, lane-keep warning and assist, forward and reverse parking sensors, and a 110-volt power outlet.

Of course, all of that comes with the $27,940 XLT, not to mention adding 17-inch alloys, a 4.2-inch center screen with Ford Sync, an extra USB, a 4G Wi-Fi hotspot, and an upgraded 6-speaker stereo. And just so everyone knows you spent a little more, you get a unique grille, too. The big advantage at this level is the ability to add the Ford Sync3 system, which will unlock Android Auto and Apple CarPlay as well as Sirius XM, and toss in a leather-wrapped steering wheel and shifter for $995. Navigation and adaptive cruise control can be added for another $795. Other than a long list of appearance packages, it’s the 302A group for $2,800 that should tempt; it adds an 8-way power heated driver and passenger seats with power lumbar support, remote start, the Sport Appearance package, and the important manual sliding rear window.

Want to get fancy? You can move up to the Lariat for $32,210, which in addition to the features mentioned above will get you LEDs front and back (including an LED cargo lamp), leather upholstery, dual-zone auto climate control, an upgraded 8-inch touchscreen, and 18-inch alloys. 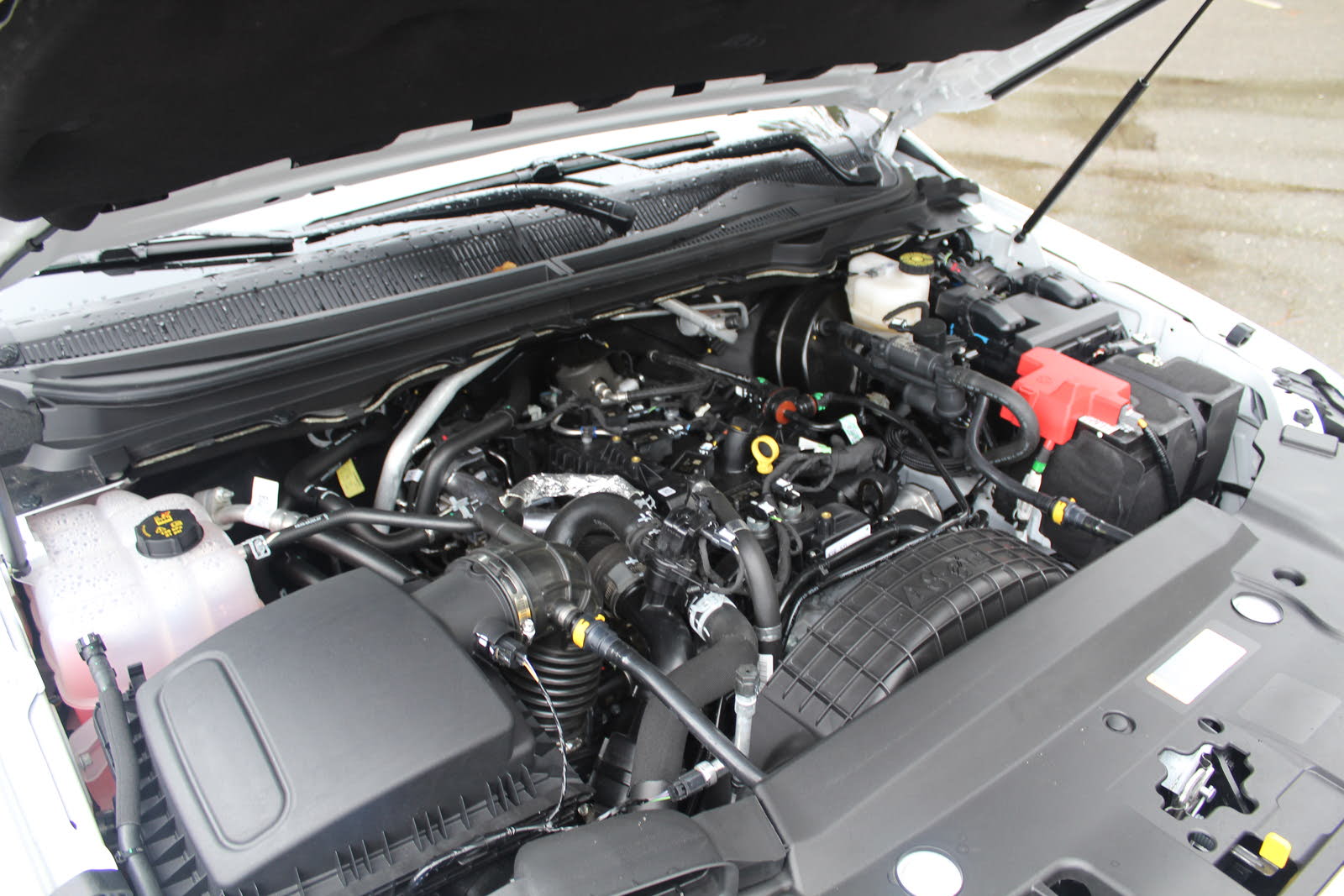 The 2.3-liter EcoBoost engine is the same basic unit we’ve seen in the Focus RS and the Mustang already—modified here for truck duty—and the 10-speed transmission is shared with GM and has recently been used in many different vehicles. Don’t be scared of the head-gasket issues you may have heard about surrounding this engine—those were in the early Focus RS application, and they’ve long been resolved. I obviously can’t speak to how a turbocharged 4-cylinder engine will handle hauling 7,500 pounds over an extended period, but so far we have no indication of any issues.

The EPA-estimated 23 mpg combined, with 21 city and 26 highway, puts the Ranger in some very competitive territory, most importantly beating the Tacoma’s V6, which should prove to be its most aggressive competition. It’s a stout, eager engine that works best in Sport mode, as it’s a little underwhelming otherwise. It’s the 10-speed transmission that’s holding things back here, which is a bit confusing. In other applications I’ve tested, it’s been quick and responsive, if a little indecisive. Here it feels almost reluctant to shift unless it’s in Sport mode. That said, if you drop the transmission into Sport and pin the pedal, you’ll hit 60 mph in under 7 seconds, with some tests showing closer to the low 6-second range. That’s impressive.

That’s about where the good news ends, however. Steering and braking are both pretty numb, though you shouldn’t expect sports-car performance from a pickup. And while the suspension tune has been nicely optimized for on-road duty (meaning you won’t get banged around with every bump and ripple in the road), things can get a bit floaty over uneven surfaces. Likewise, if it’s off-road excursions you’re interested in, the Ranger does fall a little flat. There’s just not enough articulation in this suspension to handle anything really aggressive. Any really rough terrain will have one wheel come off the ground and see you spinning. 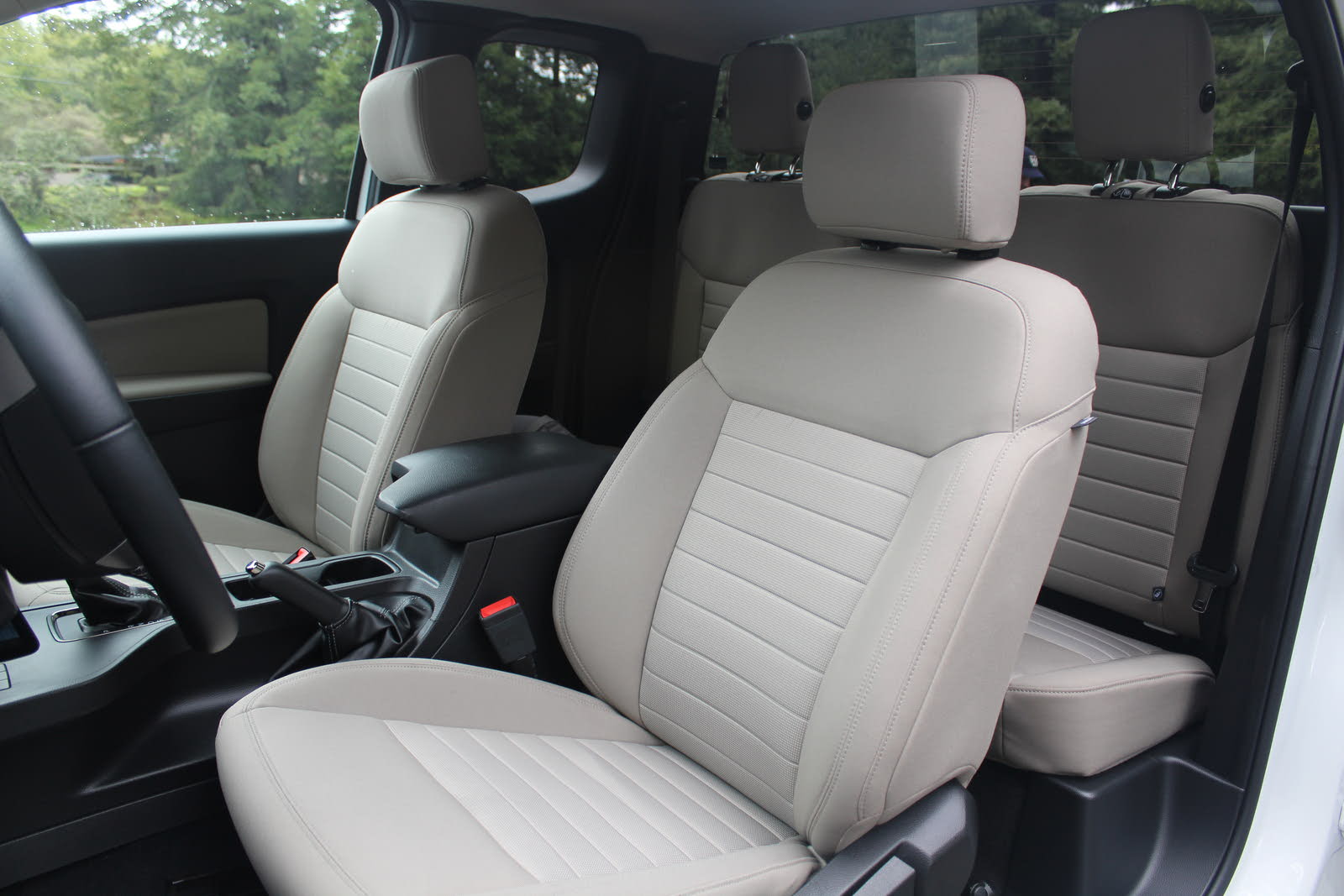 Are you looking for an ultra-affordable pickup that can handle everything but the biggest loads? You can have that. How about something with a little more luxury but without the often-unmanageable girth of today’s unwieldy full-size offerings. You can have that as well. It just depends on what you want and what you’re willing to pay. But let’s be clear, this can’t do everything. If it’s off-roading that interests you, look at the Tacoma instead. And while this certainly isn’t the worst offender in a long list of Fords with awful interiors, there are better options out there with regard to style and class.

It’s also important to note that if you are interested in those best-in-class numbers, options like the SuperCrew cab (with it's bigger rear seat) or 4-wheel drive (4WD) will drop maximum payload by a couple hundred pounds. That’s worth thinking about, because the SuperCab configuration isn’t really suitable for anything other than luggage or smaller dogs. I’d also recommend taking some time to drive the Ranger for longer than your typical test drive if you can manage it, as I had several passengers start feeling sick when we drove over less-than-pristine roads, as the softer suspension tune had the truck floating up and down quite a bit. 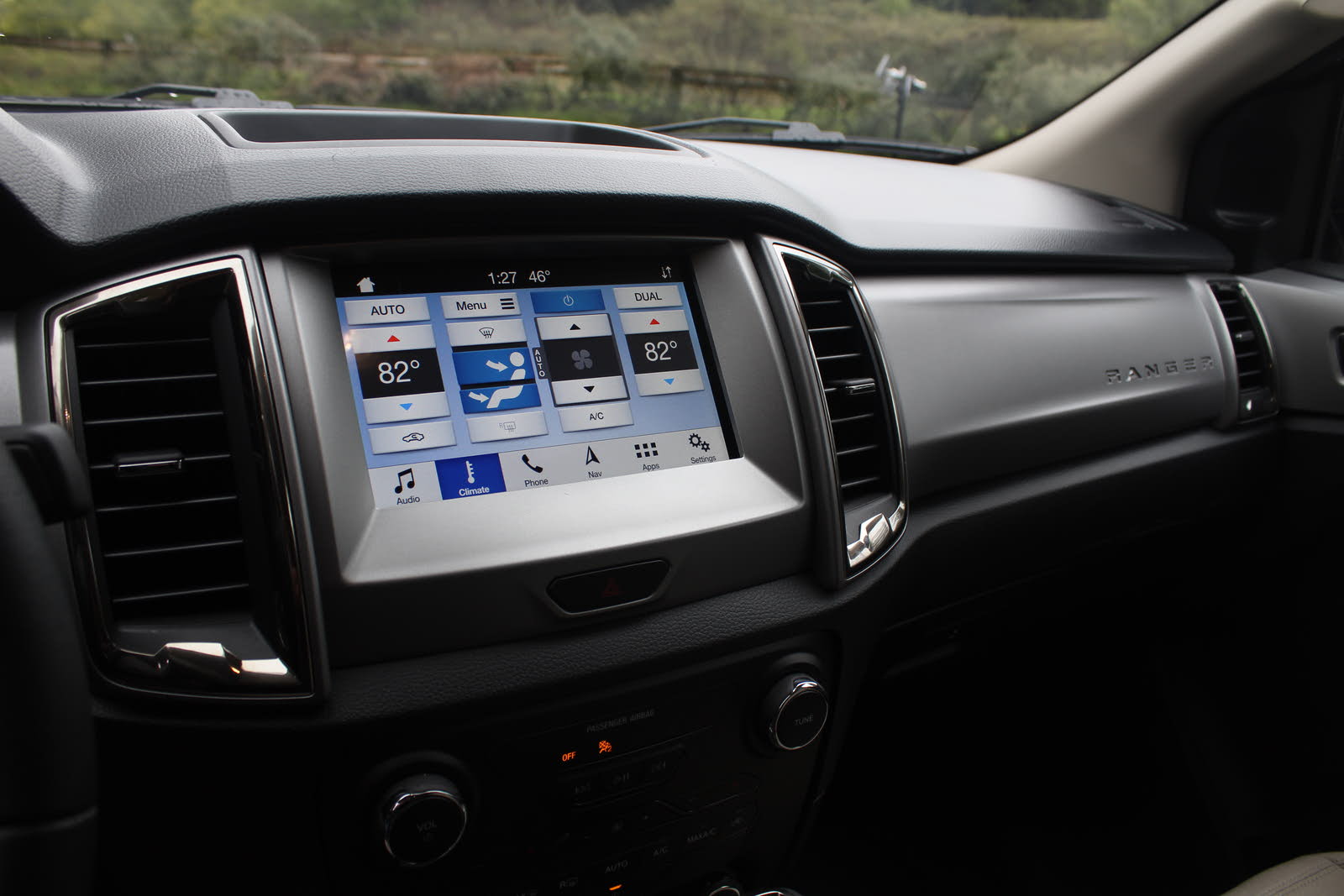 While the XL trim is about as close to a stripped-out model as you can buy these days, it does still come with technology like a rear-view camera, USB port, Aux jack, and safety tech like forward-collision warning with automatic emergency braking. Anything above the XL can be outfitted pretty much to your satisfaction. I’m still not a fan of the overall look or responsiveness of the Sync3 system, but it’s wholly capable and very easy to use, and the Ranger's available safety systems will land you just this side of Level 2 autonomy. The 4G Wi-Fi hotspot and the optional Bang & Olufsen stereo are of special note, because everyone knows music sounds best in a pickup. 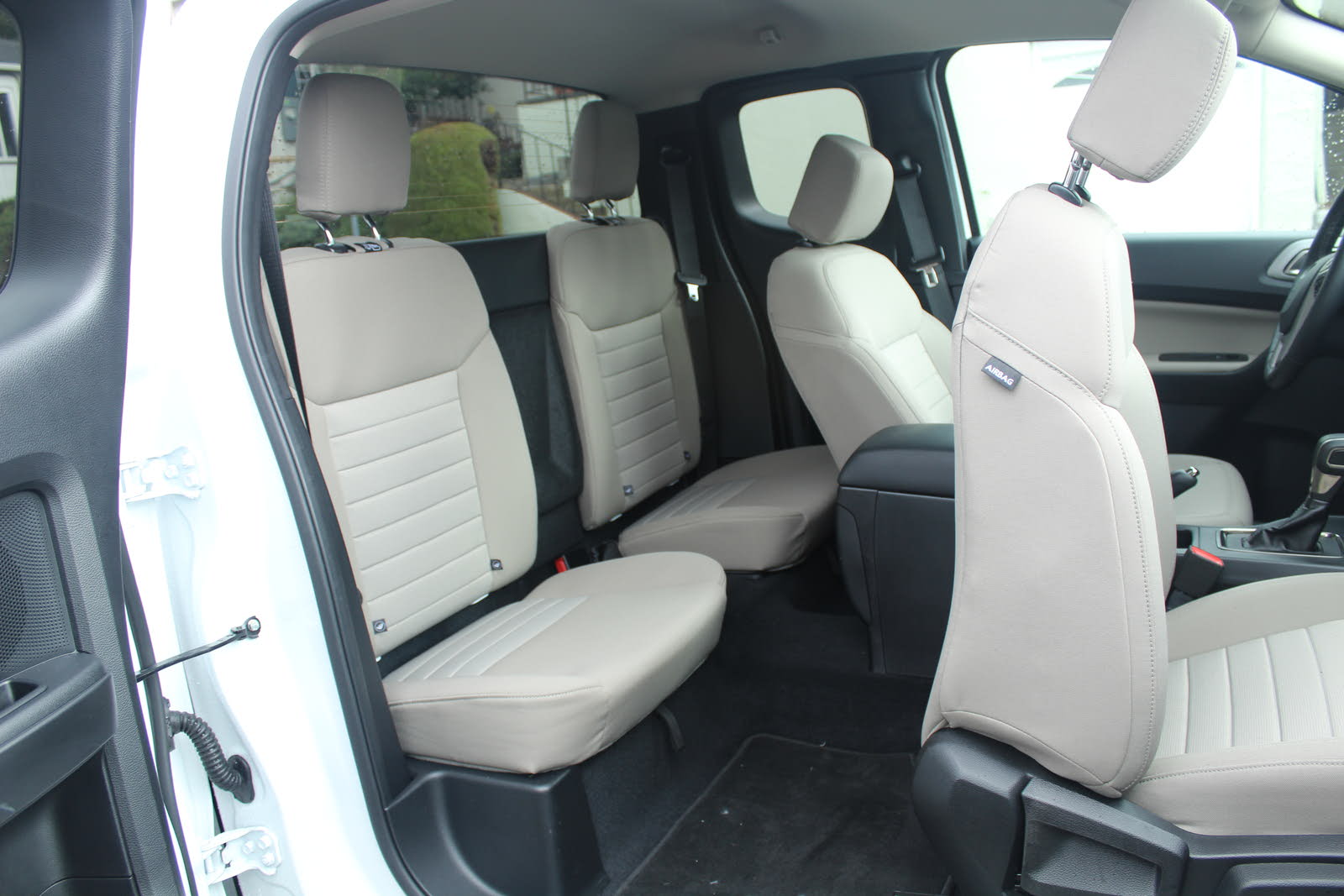 Test data for the 2019 Ford Ranger is currently unavailable from either the government’s National Highway Traffic Safety Administration (NHTSA) or the independent Insurance Institute for Highway Safety (IIHS). Ford also traditionally neglects to publish braking distances, but I can report that I found no fade after repeated hard stops.

There has been one recall so far for the 2019 Ford Ranger, which has affected 3,500 North American-sold vehicles, 3,000 in the US and 500 in Canada. This defect has been described as resulting from an improper installation of the wiring sub-harness for the shifter that could come in conflict with the bezel, resulting in a vehicle that could shift out of Park even with the vehicle off. 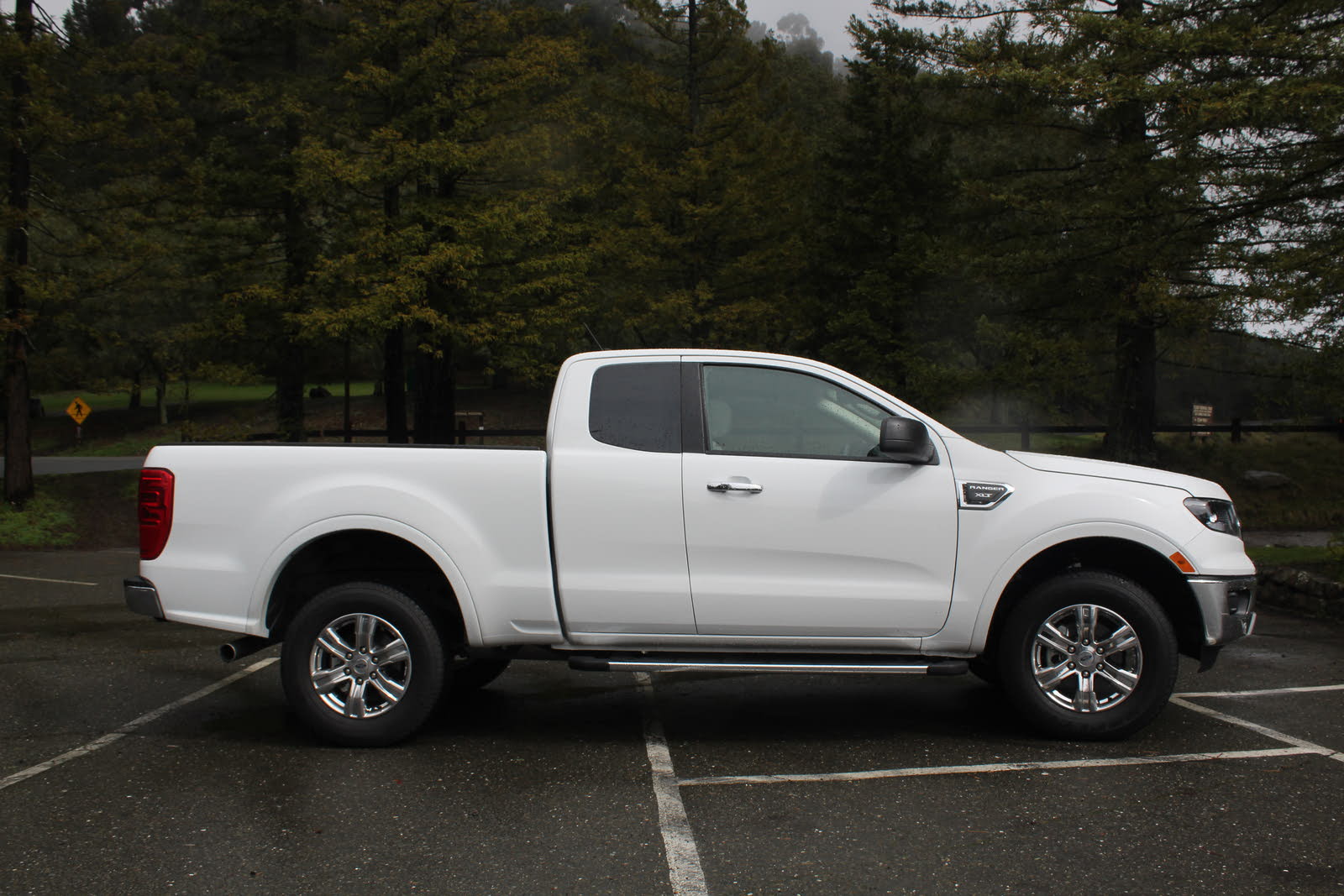 Given that it gives you best-in-class numbers for more than 10 grand less than its closest competitor, the Ranger does very well on a cost-effectiveness basis. It’s when you start rising in the trim levels and adding options that things get a little more fuzzy. When you’re paying the same amount as for a V6 Tacoma, some people are less willing to shell out the same cash for a 4 cylinder—even one as impressive as the EcoBoost. Let’s be honest -- for the most part, truck buyers are definitely part of the “bigger is better” camp, after all. But for a cheap, capable truck, it’s hard to beat the Ranger.

Tim The American auto makers needed to create something individuals would consider in this category. It is not the old Ranger for sure, so it should have a new name. Hopefully there will be a base commercial version to capture that business segment.

GuruL4K7Q Actually, the vehicle could be better called the El Gordo Ranchero. It is a disappointment to those of us who actually use trucks as trucks. I invite you to see the specs on the UK version. that is available with a true long bed (roughly 8') a single cab, A diesel that gets 33 mpg, with a six speed manual transmission. There are hooks on the outside of the bed to allow the user to actually tie down a load. The interior is simple and easy to keep clean, and if you get it dirty, who cares? Their promo pics tell the story -- the truck is doing a job and earning its keep with a load of hay bales. The US shows some mindlessly racing through formerly trackless wildness with an empty bed kicking up a lot of dust. One might call the US version a "lifestyle vehicle " (Ford does) but a truck? Nope.

Have you driven a 2019 Ford Ranger?
Rank This Car

Purchased 2019 Ford Ranger Lariat. Do not need automatic engine stop/start feature - actually it is a hinderance for my use. Other than manually disabling the feature each time the engine is started,...

There is FORD 2018 model. Engine keeps running even if i turn ignition off and remove the key out. What could be the problem and what should i do

I have two 2019 Ford Rangers I want to list but the system wont let me. What do I do?

Bought new from my local Ford dealer and after the 1st oil change a small leak developed at the oil filter. Dealer checked and found no leaks at the first visit. Leak is very small; maybe a tablespo...