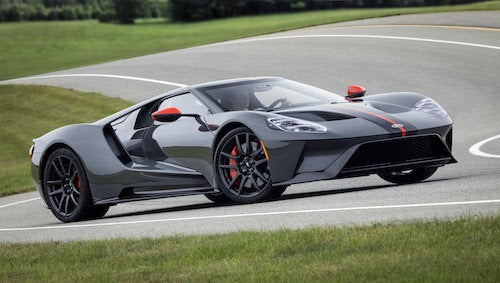 Ford may be moving toward more electric vehicles and SUVs, but it hasn’t forgotten its incredibly rich performance heritage. The performance spectrum ranges from the various iterations of the Mustang to the Ford GT. After a decade-long hiatus, the GT returned for 2016 with a new design, albeit one with styling that still hinted at the GTs of old, putting Ford back among the best in the world of high-performance exotics. Such top-tier, low-production cars like the Ford GT don’t go through year-to-year updates at the same pace as mass-market automobiles, but there is still exciting news for 2019 with the addition of the Carbon Series trim. As the name suggests, it makes more extensive use of carbon fiber to save nearly 40 pounds compared to the standard model, and it stands out visually thanks to bare carbon-exposed body stripes, A-pillars, and lower body panels as well as colored accents in either silver, orange, red, or blue for the mirror caps, center stripe, and brake calipers. The wheels are carbon fiber, while the lug nuts and the exhaust are titanium, and the engine cover is made of polycarbonate. On the inside, the Carbon Series has a different seat pattern, clear anodized paddle shifters, and a unique badge on the instrument panel. While the weight savings is done in the name of performance, the Carbon Series isn’t quite as hardcore as the track-focused GT Competition trim, as the Carbon Series still has a radio, air conditioning, and an infotainment system.

Regardless of trim, the Ford GT comes with a twin-turbocharged 3.5-liter EcoBoost V6. It makes 647 horsepower and 550 pound-feet of torque driving the rear wheels through a 7-speed dual-clutch transmission (DCT) and hits a top speed of 216 miles per hour and completes a 0-60 sprint in less than three seconds. Despite the EcoBoost name on that V6, the engine is thirsty and the GT manages just 11 mpg city, 18 highway, and 14 combined. That said, there aren’t many more exciting ways to burn fuel.

The GT is on par with the best of the exotics from Europe, and the GT’s performance credentials have already been proven on the world’s race tracks. The tub and body panels are made of carbon fiber, while the subframes are aluminum. The brakes are carbon ceramic and the 20-inch wheels are either forged aluminum or carbon fiber. The suspension features race-inspired longitudinal inboard dampers.

The Ford GT is all about performance, but it’s also a car with a very high price tag, so the interior is both well equipped and well designed. There are deeply bolstered carbon-framed Sparco seats, a digital instrument display, and a flat-bottom steering wheel with numerous electronic controls. In the middle of the dash is Ford’s Sync 3 infotainment system. The more hardcore Competition trim adds Ebony Alcantara suede for the seats, headliner, and instrument panel as well as bare carbon fiber trim and red accent finishes. As for safety, exotics like this are too expensive for crash testing and the GT only comes with the safety features required by law, like a reversing camera.

The GT is one of the most exclusive and exhilarating cars on the road. And if the GT of 2005 is any indication, these latest ones will be highly collectible cars in the not-too distant future as well.