Ford tries to tempt buyers away from the Prius by giving the Fusion Energi a mild facelift, increased range, and some fresh safety features. 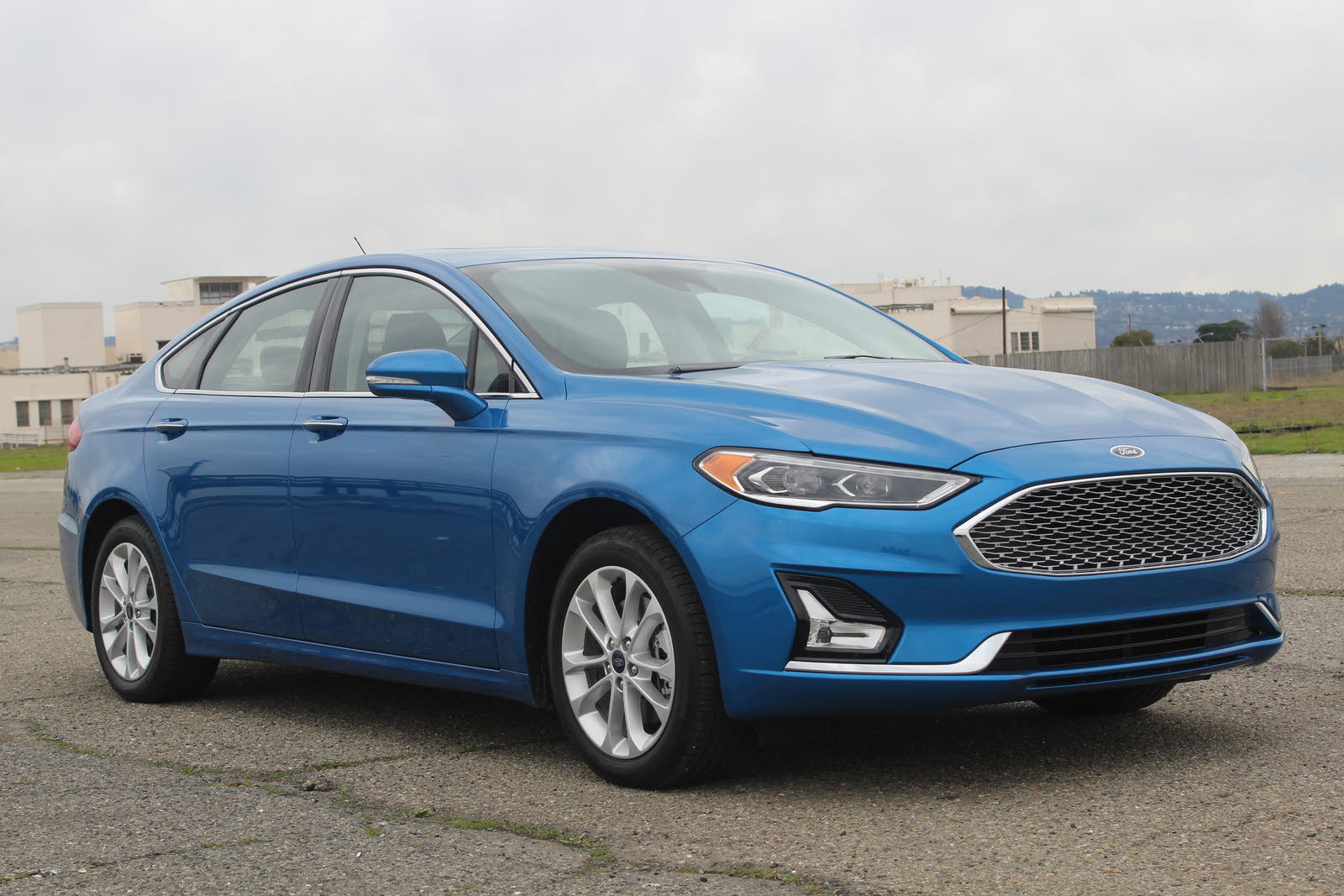 The Fusion may be going away for good, but before it takes its final bow, Ford is doing its best to keep it relevant. This year, the plug-in hybrid version—the Energi—receives increased battery capacity (from 7.6 kWh to 9.0 kWh), thanks to more energy-dense chemistry. In turn, this increases the stated electric range from 21 to 25 miles, putting it right in line with the best-selling plug-in hybrid on the market, the Prius Prime. Additionally, a mild facelift has updated the front and rear, but the real winner for 2019 is Ford’s Co-Pilot360 suite of driver-assistance tech. This addition adds blind-spot monitoring, lane-keeping assist, automatic emergency braking with pedestrian detection, automatic high-beams, and a reversing camera. The Fusion is the first vehicle to get this new package, and in one of the smartest moves Ford has made of late, it comes standard across the range. 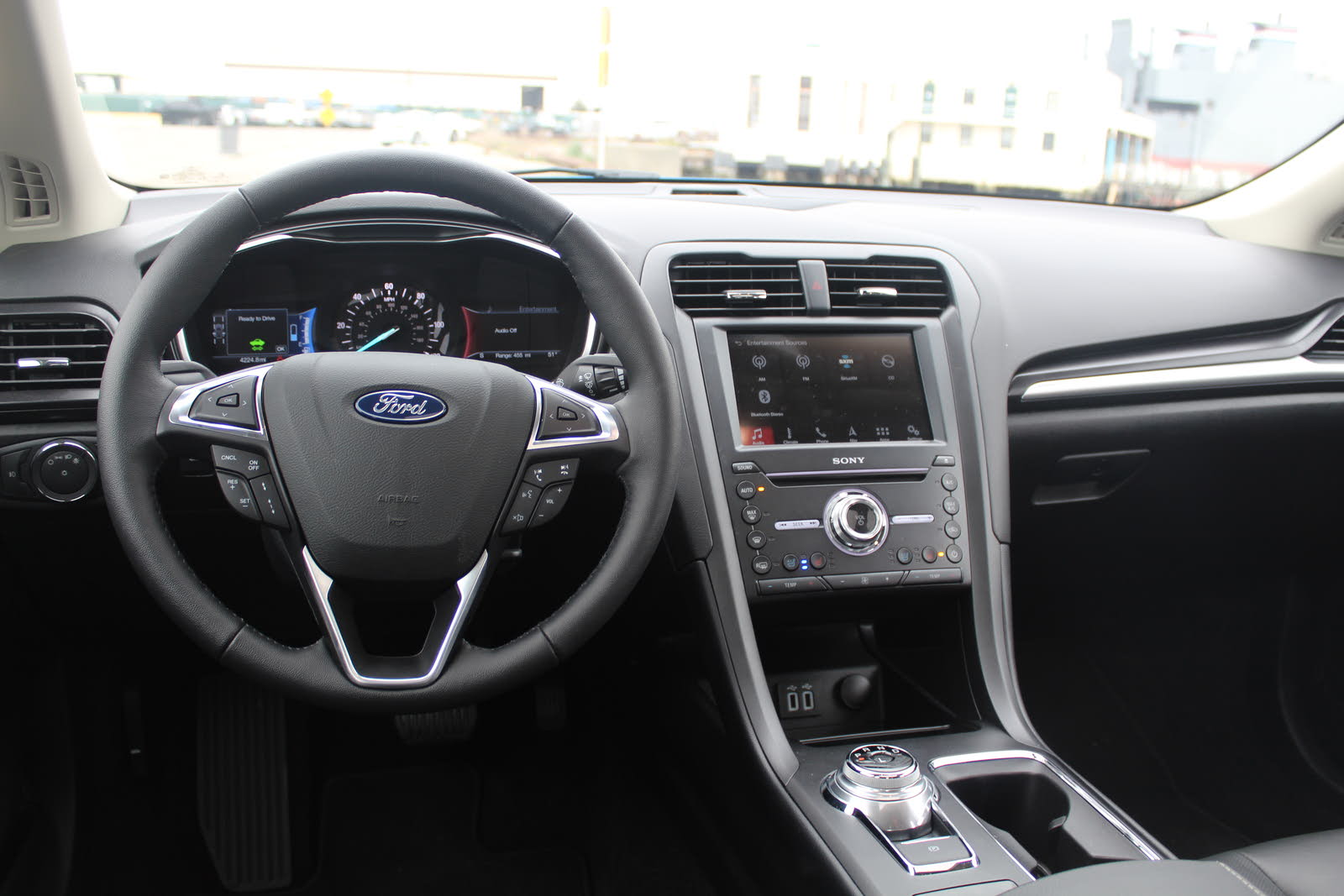 Depending on how you feel about electric vehicles, one of the best things the Fusion Energi has going for it is stealth. Unless you spot the round charging port on the front fender, you could easily mistake it for a conventional Fusion, which addresses one of the main complaints people have with some of the more visually distinct options out there, like the Toyota Prius and Chevy Volt. Beyond that, the Fusion’s chassis is one of the better ones on the market today, with enough poise and balance to not be wholly disrupted by the extra weight of the batteries. That’s not to say you won’t notice them—it’s hard to ignore an extra few hundred pounds stuffed in the rear—but the chassis does a good job handling the extra weight.

Space is more of a mixed bag. Inside, you’ll get substantially more room in the front and back than you'll find in some competitors, even for taller passengers. The trunk, however, is a different story. Most of the competition employs a hatchback or liftback design, which means you get much more cargo capacity. A Honda Clarity Plug-In can boast 15.5 cubic feet, for instance. That’ll best even the regular Fusion’s 12 cu-ft, but with the batteries of the Energi, trunk space drops down to 8.2, which is nearly unusable except for a couple of grocery bags.

Additionally, the Energi is available in only the top-tier Titanium trim, and for the nearly 40 grand you’re going to spend before discounts, things don’t feel very top tier. The buttons feel cheap and like they’re going to stop working at any time, and the materials look cheap—even the soft-touch parts. When I first sat in the Energi, I didn’t realize the soft-touch parts were actually soft until I touched them, and that doesn’t exactly scream “quality.” There are some fitment issues as well, like a gauge hood that flexes at the slightest touch. Overall, I wish things felt and looked like they were put together better.

The Fusion Energi is available in a single trim level this year: Titanium. With a starting MSRP of $36,595 and the single option of a power moonroof for $1,095, the $895 destination and delivery brought the total price to $38,585. 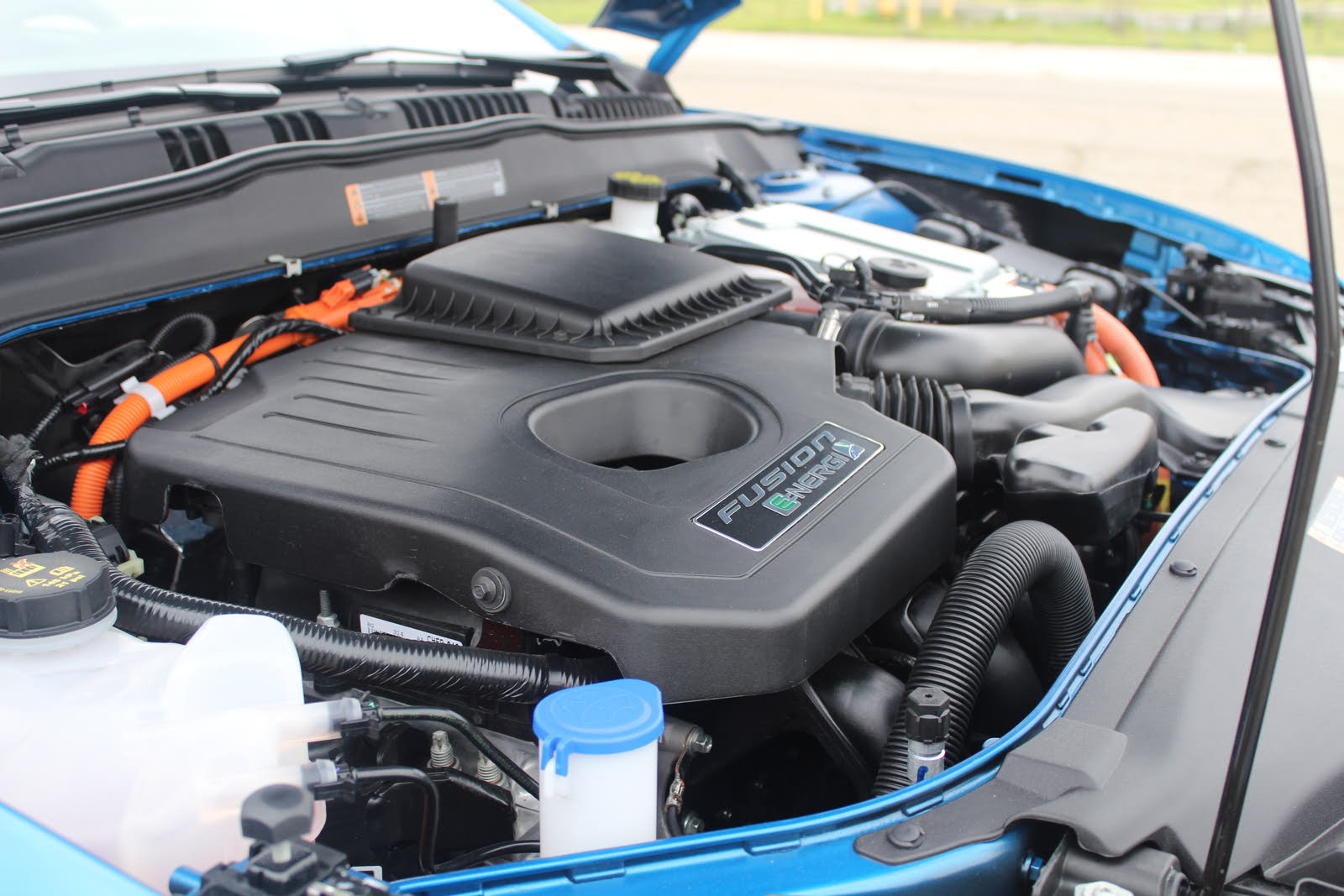 The range increase this year comes as welcome news, but it also comes with a bit of a caveat. Over the course of a week, I had trouble getting anywhere near the new 25-mile all-electric range. Admittedly, I live in a very hilly area, but after just a few miles, the Energi was no longer able to run on electric power alone until I got back home and plugged it in for a bit. Still, that shouldn’t dissuade you, as I went nearly an entire week driving the Energi before I saw the gas gauge budge off Full, which is exactly what you want from a plug-in hybrid.

More than that, the overall range here crushes the competition's. The Energi offers more than 600 miles total versus the Volt’s 420 and the Clarity’s 340, and that’s a substantial difference. Power is more than adequate as well—in fact, probably more adequate than you’d like. The electric motor's torque combined with eco tires will easily overpower the traction, especially in the wet.

Otherwise, it’s got the typical hybrid issues. Steering is numb and vague, although quite direct and seemingly improved from its original profile. Braking still feels wooden and slightly grabby. That said, when I first tested the Fusion Energi years ago, I found both its steering and its brakes to be the worst in the segment. Now they’re merely middle of the pack, so things seem to have improved slightly. Perhaps I’ve just gotten used to being disappointed when it comes to hybrid steering and brakes, though. 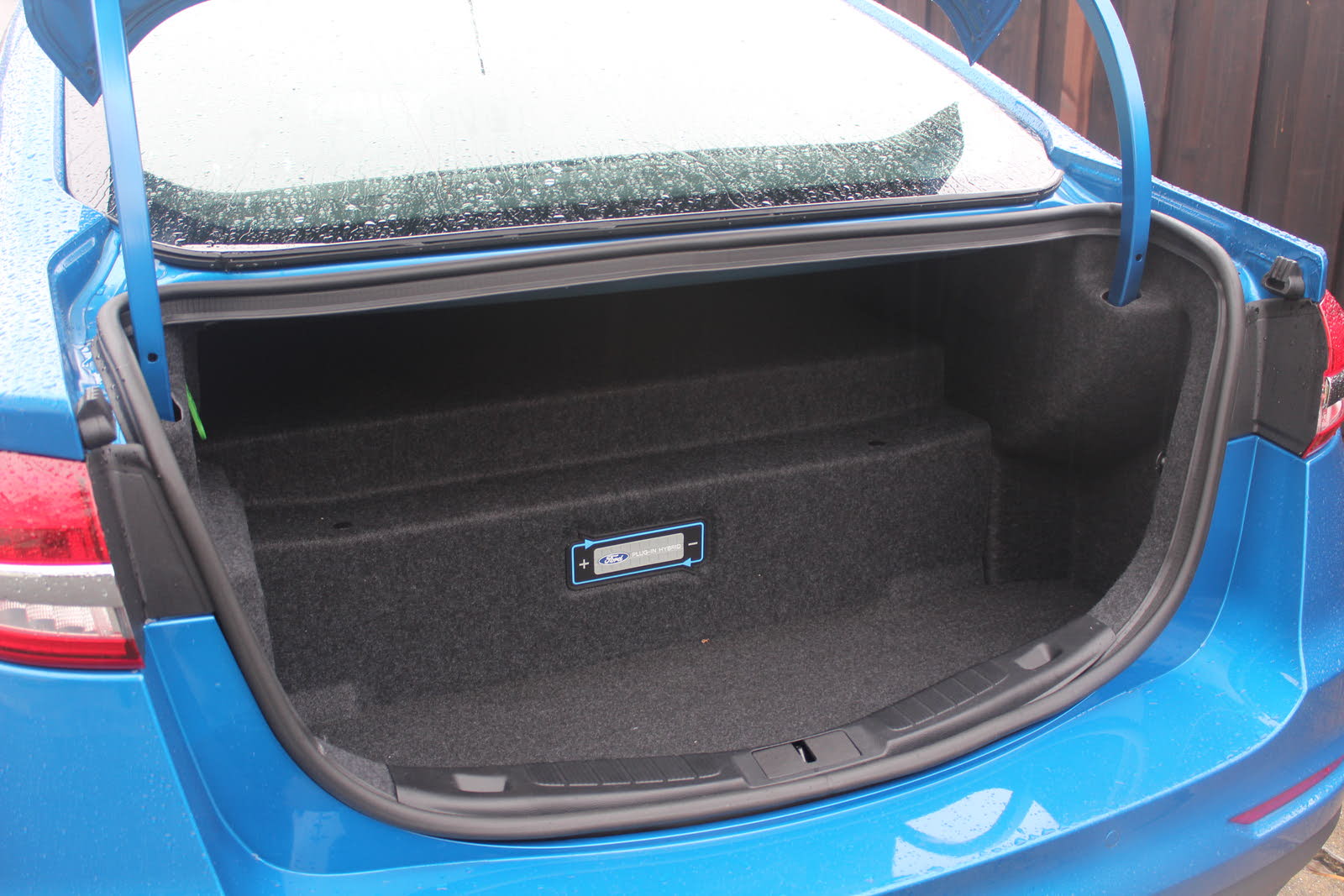 Form and function are hard to quantify with the Fusion Energi. It now boasts the same all-electric range as the best-selling plug-in on the market at 25 miles, but I’ve been unable to replicate anywhere near that distance. Similarly, for overall range it absolutely dwarfs the competition at more than 600 miles, but since the trunk is so small, you’ll have a hard time bringing the luggage you’d need for a trip like that. And while the rear seat does fold 60/40, the pass-through opening is literally only large enough for a pizza box—and it has to be a medium pizza. That’s not an exaggeration in the slightest.

But interior space can’t be beaten, and that makes the Fusion Energi ideal for commuting (and especially carpooling). Four adults can ride in comfort, and you’ll barely use any gas along the way. But your occupants might wish they were surrounded by a more upscale interior. And with only 2 USB ports and 2 12-volt sockets, you might be doing a bit of a charging shuffle. That seems an oversight, given the tech interest of the usual plug-in demographic. 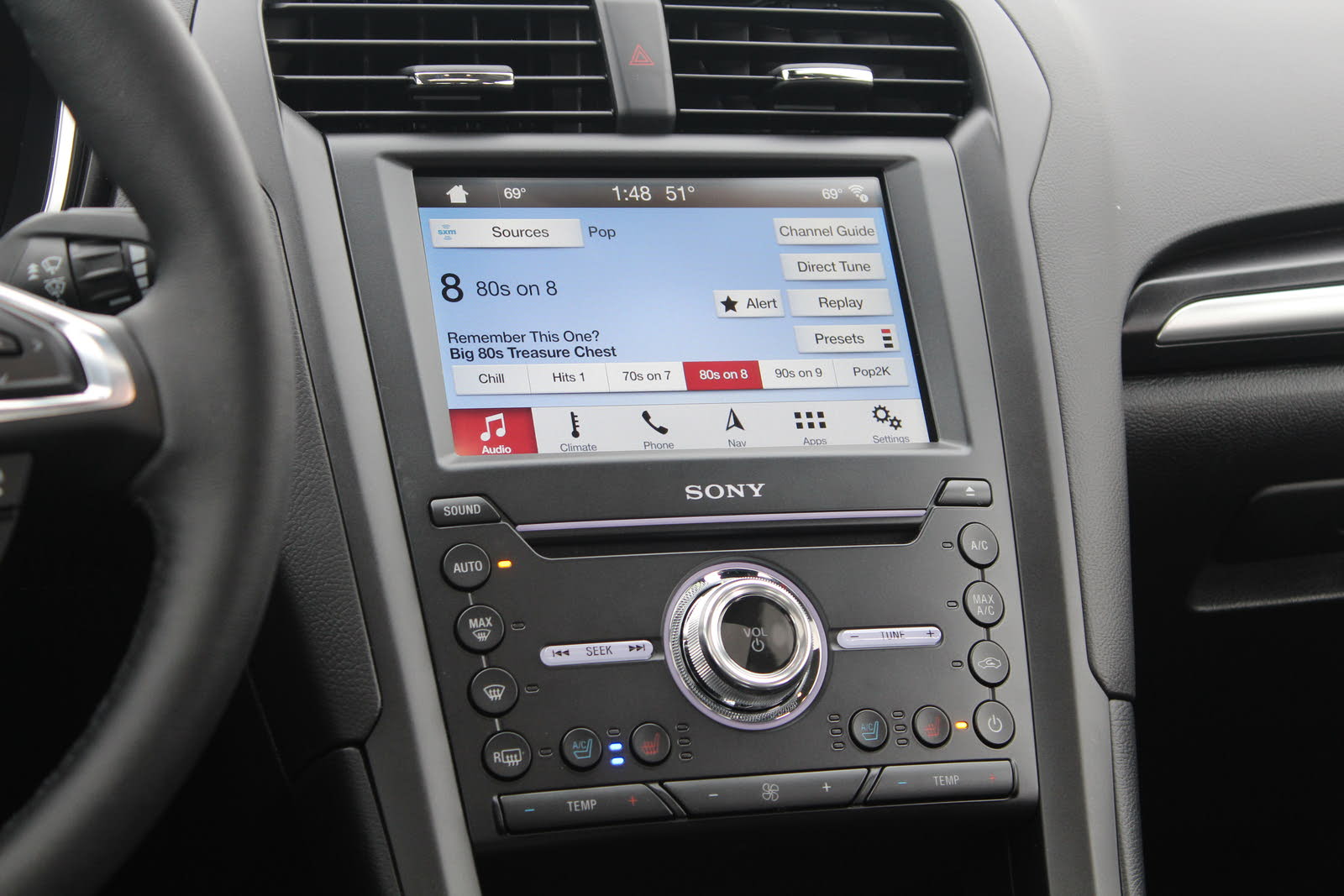 Despite the lack of USB ports mentioned above, the Fusion Energi is actually quite well equipped with technology, especially now that the Titanium is the only trim. That’s a good thing because there are no options or packages available beyond a sunroof. You get LEDs all around, ambient lighting, an auto-dimming driver’s mirror, and automatic wipers. You also get keyless entry and ignition with remote start, adaptive cruise, heated and ventilated front power seats, and dual-zone auto climate controls.

The Sync 3 interface is a competent (if not very attractive) interface, but you will notice some delays at times as the system slugs along. Android Auto and Apple CarPlay are standard and offer a much better alternative to the native voice-activated navigation, and the 12-speaker Sony stereo with HD and satellite radio fills the car with clear audio, helped along by a very quiet ride at highway speeds. 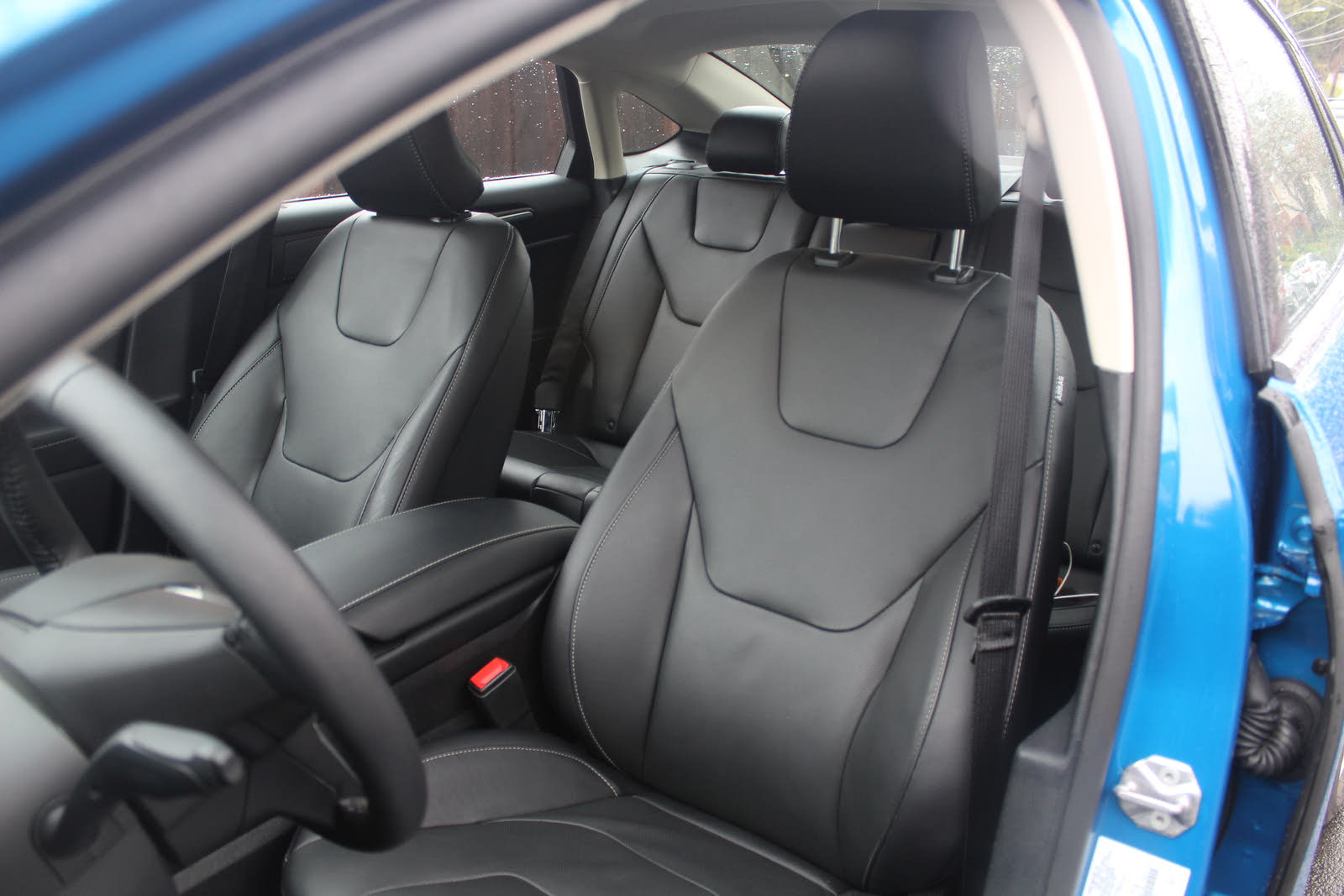 The new Co-Pilot360 suite of driver-assistance tech debuts in the Fusion and includes blind-spot monitoring, lane-keeping assist, automatic emergency braking with pedestrian detection, automatic high-beams and a reversing camera. That’s a very nice package of standard safety equipment, and it prevents the Fusion from falling behind the competition. It should be noted, however, that you can’t disable the lane-keep, so if that’s something that bothers you, consider yourself warned.

My main concern, as it is with most hybrid vehicles, is with the braking. Taking 129 feet to stop from 60 mph is quickly becoming worse than average. This poor performance results from the extra weight coupled with eco tires, and it's one of the least-considered downsides of the hybrid craze. Advanced safety systems are nice and all, but if the car in front of you can stop 20 feet shorter than you can, it doesn’t matter how quickly your car's computer is hitting the brakes.

As for safety tests, an overall 5-star rating from the government’s National Highway Traffic Safety Administration (NHTSA) masks a concerning 3-star rating in the front-passenger test. A 4-star rating for rollover is less of a worry given the small likelihood of the Fusion suffering a rollover, and independent testing from the Insurance Institute for Highway Safety (IIHS) garnered top marks in all tests excepting a Poor rating for the headlights—which won’t be a concern with the Fusion Energi’s LEDs—and a Marginal rating for the ease of use on the child-seat anchors. Ford has buried the bottom anchors deep between the seat cushions here, but once you’re set up you will be good to go. 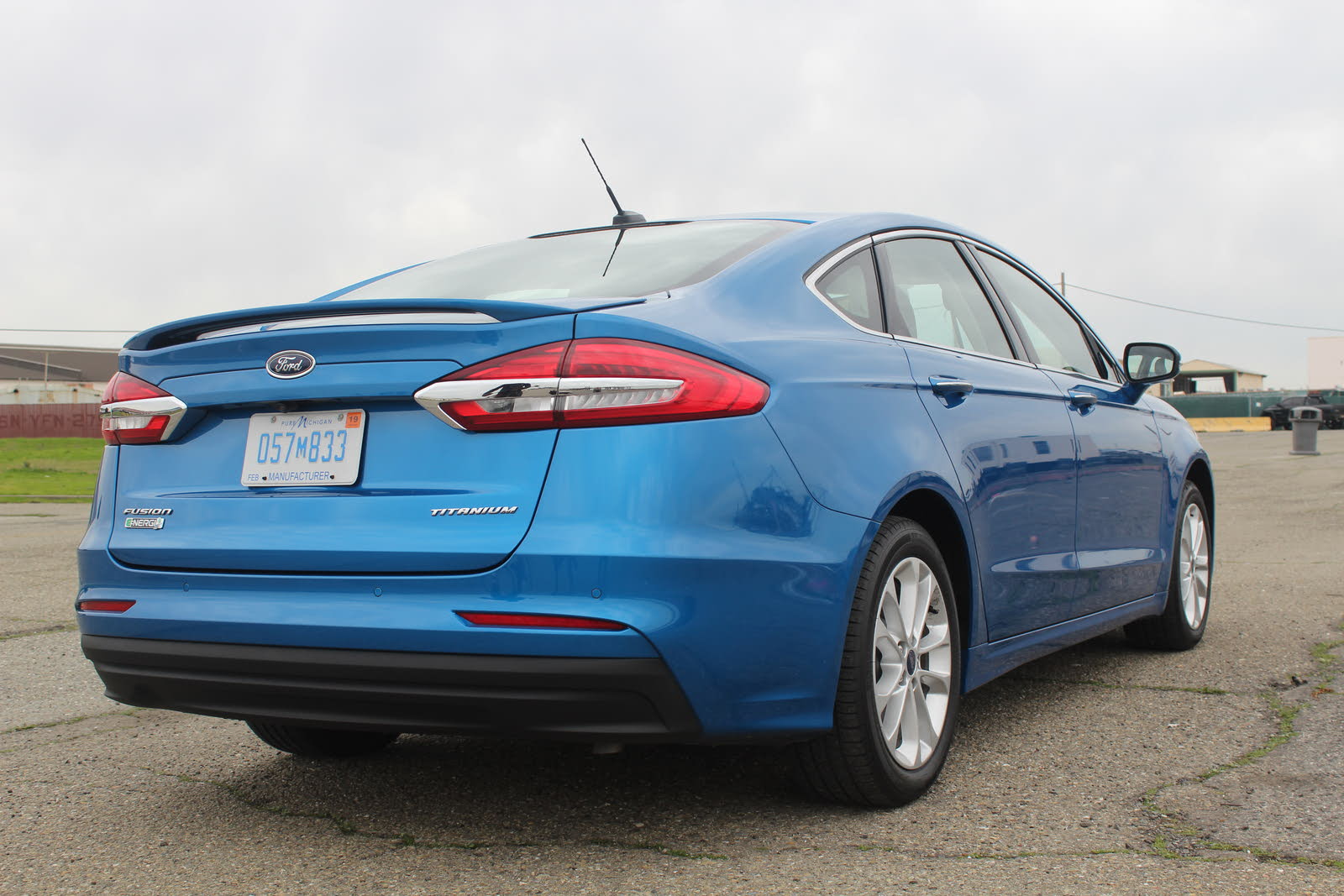 Overall, I can’t recommend the Fusion Energi. The extra cost for the plug-in privilege is simply not outweighed by the unfulfilled promise of 25 miles of all-electric range, especially when considering the minimal trunk space. Moreover, the penalties to the ride, handling, and braking impact one of the best parts of the conventional Fusion. The one nod to cost-effectiveness I can give to the Fusion Energi is that with its increased battery capacity, the Federal Tax Credit goes from $4,000 to $4,600 this year. But overall, you’d be better off looking somewhere else for your plug-in hybrid.

What's your take on the 2019 Ford Fusion Energi?

Have you driven a 2019 Ford Fusion Energi?
Rank This Car

Using My Fusion Energi Like A Generator During Hurracane

I see in you tube where they us a Prius like a generator to Run lights and tv in the house. Can I do that with my 2019 Fusion titanium Energi?

My Car Is Fully Charged But Only Will Run On Gas? Whats The Problem?