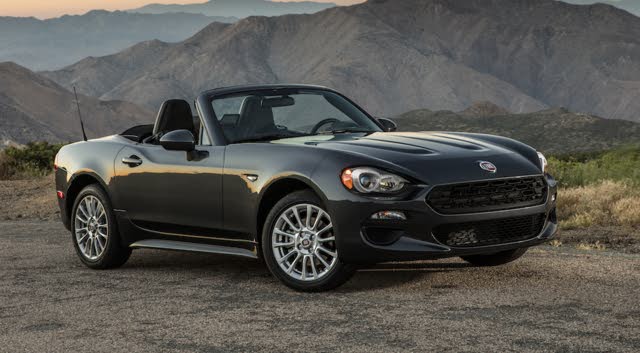 Few, if any, modern vehicles capture the passion of a classic roadster like the Fiat 124 Spider. Although it has throwback styling, it’s a modern sports car, with a refined, turbocharged engine. And yet, despite the modern amenities, including the latest infotainment technology, it's a simple vehicle, allowing the driver to fall in love with the process of a spirited country drive.

The simplicity of the 124 Spider is due to the fact that it's based on the Mazda MX-5 Miata; it's even built at the same Mazda facility in Hiroshima, Japan. But the 124 Spider differentiates itself from the Miata’s styling with a long, sculpted hood, pronounced fenders, and a front fascia that is an honest recreation of the original Fiat 124 Spider from the 1960s.

While the exterior is pure Fiat, the interior is still that of a Miata. The climate controls, instrument panel, and steering wheel design are all right out of the Miata, including the infotainment system, which is now standard for 2019. It consists of a dash-mounted 7-inch semi-touchscreen. The touch functions lock when the vehicle is in motion; drivers can operate it via a dial in the center console.

The cockpit of the 124 Spider is snug, but there's enough room for basic daily items. The tray at the base of the center stack can hold a wallet and cell phone, while the center console tray has enough room for one or the other. There are no fixed cupholders in the 124 Spider, but Fiat provides two modular cupholders, which can be inserted into receivers either in the passenger-side-knee area or in the back of the center console.

For anything larger than personal items, a deep, lockable compartment between the driver and passenger seats functions as the car’s glovebox. If you need trunk space, don’t expect much, as the 124 Spider provides only 4.94 cubic feet of cargo space.

The tight quarters and limited storage options are all in the pursuit of providing a pure driving experience. Another step is the manual convertible top, which drivers can lower with one arm—a refreshingly simple process that opens the driver and passenger up to the fresh air and open road.

The Abarth features a striking and aggressive appearance, marked by the revised, aerodynamic body work, gunmetal accents, and optional black hood. The Abarth also ups the ante with a Bilstein sport suspension, Brembo brakes, limited-slip differential, and a quad-tipped exhaust.

For 2019, Abarth trims can be had with the Veleno appearance group, adding red accents for lower front fascia, a red painted tow hook, and red mirror caps. The Abarth is also available with the Record Monza exhaust for an even more sinister sound.

The standard engine in the Fiat 124 Spider is a 1.4-liter turbocharged inline-four, making 160 horsepower and 184. With the Abarth, that engine puts out 164 horsepower but still offers 184 pound-feet of torque. Power is sent to the rear wheels through either a 6-speed manual transmission or 6-speed automatic transmission.

Fuel economy estimates for the manual-equipped variant are 26 mpg city, 35 highway, and 30 mpg combined. With the automatic transmission, fuel economy is 25, 36, and 29 combined.

Standard safety features include front- and side-impact airbags, a reversing camera, traction control, and fixed roll bars around both occupants. Buyers can opt for the Comfort and Convenience Group, which adds blind-spot monitoring and rear cross-traffic alert.

As new cars become ever more bloated with features, the Fiat 124 Spider is a breath of fresh air. Its minimalist approach is a far cry from that of the crossovers and minivans with which it shares the road. This purist’s sports car provides some helpful features for the daily commute, but more importantly, it's an absolute dream to drive.

Steve Love my little bronze Lusso. I was asked today if it is a Porsche or what?

Users ranked 2019 FIAT 124 Spider against other cars which they drove/owned. Each ranking was based on 9 categories. Here is the summary of top rankings.

How To Remove The Start/stop Button

How can I remove the start/stop button without disassemble the entire dashboard?

Palmetto North Miami Alfa Fiat is advertising a Fiat 124 Spider and not honoring the advertised price on your website. What can be done about FRAUD