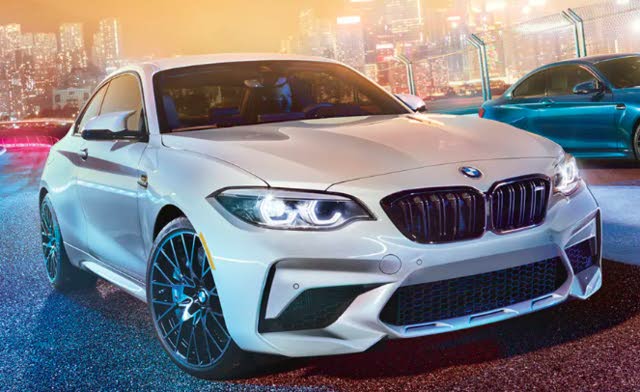 As the performance variant of the BMW 2 Series, the BMW M2 is the brand’s smallest and most-accessible vehicle in its performance portfolio. The M2’s subcompact dimensions, rally-car looks, and tight driving dynamics remind many of BMW’s classic performance cars. For 2019, BMW adds plenty of upgrades to bring the M2 Competition up to par with the rest of the M line.

The M2 Competition’s exterior receives a handful of subtle changes. Its grille is now gloss black with sharper edges than before, and the all-black theme carries into the wheels and exhaust tips. The front bumper now features larger intakes, and the side mirrors have been redesigned to match BMW’s other M models. BMW also adds two new colors for 2019 – Hockenheim Silver Metallic and Sunset Orange. On the inside, changes include new M-Sport seats with contrast stitching and badging, a reworked steering wheel, and a red start/stop button.

The M2 Competition’s most major changes lie in its engine. Taken from larger M models, this new 3.0-liter turbocharged inline 6-cylinder bumps power and torque from 365 horsepower and 343 pound-feet to 405 and 406, respectively. The zero-to-sixty time decreases from 4.1 to 4 seconds, and the M2 Competition can now reach a top speed of up to 173 miles per hour. The M2 Competition also features a new cooling system designed for repeated use on the track, and both sets of brakes have been enlarged. As before, the car powers just its rear wheels through either a 6-speed manual transmission or a 7-speed dual-clutch automatic transmission.

In the world of safety, the M2 carries over its existing set of features. A reversing camera is standard, and the Executive Package bundles forward collision warning, automatic emergency braking, lane departure warning, and rear backup sensors. Unfortunately, blind-spot monitoring is still conspicuously absent from the options list. The IIHS last tested the BMW 2 Series in 2016, where it scored perfect marks in most areas and was designated a Top Safety Pick Plus for that year.

The M2 was already a competent and highly-desirable sports car, but the 2019 introduction of the Competition model ups the ante by including enough upgrades to make it feel like a true performance vehicle.

Gerry That's a lot of money (from &58,900 base price) and a promise of lifelong expensive maintenance bills! You can get virtually as good performance, comparable handling and less exotica with a Honda Civic Type R.