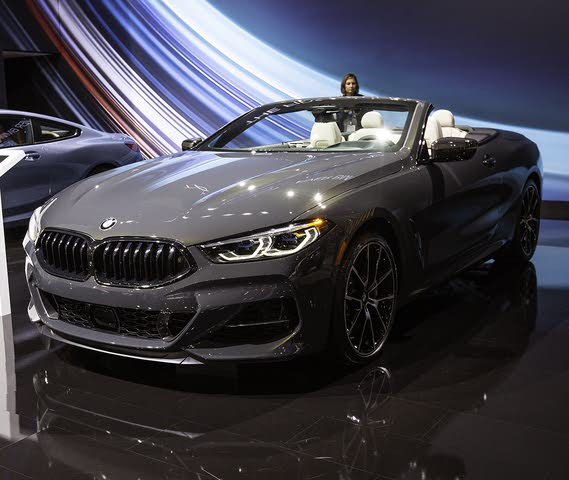 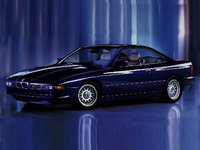 BMW introduced the 8 Series, a grand-touring coupe with distinctive styling, cutting-edge technology, and leading performance, in the nineties. For 2019, BMW dusted off the nameplate for an all-new model, a large, fastback coupe that exhibits the brand’s performance and luxury expertise. With a starting price of roughly $112,000, the 8 Series’ primary competitors are the Mercedes-Benz S-Class Coupe and mid-grade versions of the Porsche 911.

The 8 Series ushers in a new design era for BMW. There’s a version of the brand’s characteristic kidney grille, downturned for an extra menacing look. The traditional quad lighting sits within the slimmest headlights ever to grace a BMW. The 8 Series’ side panels are muscular, with vents carved out of the front fenders and plenty of concave and convex surfaces. At the back, there are narrow taillights and massive tailpipes, surrounded by gloss-black trim. It’s all just enough to be true to the automaker’s styling heritage, while making it clear that this is something new. There are a couple of wild colors, Sonic Speed Blue and Sunset Orange Metallic. There’s a Carbon Package that shaves weight and adds a carbon fiber roof panel, grille intake, exterior metal caps, rear spoiler, and rear diffuser insert.

Meanwhile, the coupe’s interior is more conventional. You’ll find a pronounced instrument cluster and a center stack that’s canted toward the driver. There’s a stark but pleasing contrast between the earthy, matte surfaces of the dashboard and tactile panels and the high-gloss infotainment screen and the area around the gear selector. One place in which the 8 Series’ interior differs from the S-Class Coupe is space. While the S-Class Coupe seats four adults comfortably, the BMW’s dramatically arched roofline reduces its two rear seats to occasional use at best. That said, the two front seats are some of the most athletic thrones on the market.

For now, the 8 Series comes in just one trim, the M850i xDrive. This consists of the same basic 4.4-liter twin-turbo V8 that’s in the 750i and M550i, only it’s dialed up to make a ridiculous 523 horsepower and 553 pound-feet of torque. BMW’s renowned xDrive intelligent all-wheel-drive (AWD) system comes standard, sending all of the power to the rear axle under normal driving via an 8-speed automatic transmission with paddle shifters. There’s also a launch-control function that allows you to accelerate from a standing start with maximum traction in as quickly as 3.6 seconds and drive to a top speed of 155 miles per hour. And, in addition to performance, the 8 Series places focus on the experience of getting there. The flap-controlled exhaust system is tuned to exude a soulful noise in any of the driving modes, and the suspension and chassis are designed to hold the car on a steady path of travel even at terrifying speeds.

The 8 Series is chock-full of cutting-edge technology. The laser-enabled LED headlights are up to 10 times brighter than normal LED headlights, capable of producing up to a half-mile of illumination. An optional upgrade lets you actively set the temperature of the heated and cooled seats, the same way you would the rest of the cabin. There’s even LED fiber-optic lighting that pulses during specific events, like phone calls or warning messages. The latest version of BMW’s iDrive infotainment system is also on board, housed within a massive 10.2-inch high-resolution LCD display.

There are a couple of options packages available, should you want to further equip the 8 Series. The Comfort Seating Package comes with the aforementioned climate-control seats, heated front-seat armrests, a heated steering wheel, and remote engine start. The Cooling and High Performance Tire Package comes with uprated tires, a higher-spec cooling fan, and an extra engine oil cooler.

BMW goes above and beyond in terms of safety and advanced driving features. Every model comes equipped with a surround-view camera and front and rear parking sensors. There’s also the standard Active Driving Assistant, which bundles forward-collision warning with city-collision mitigation, lane-departure warning, blind-spot monitoring, and rear cross-traffic alert. Opt for the Driving Assistant Plus Package and you’ll gain a steering and traffic-jam assistant, an emergency-stop assistant that brings the vehicle to a halt in case of a health emergency, and an evasion assistant that helps you react quickly to obstacles and avoid them.

The reincarnated BMW 8 Series is, like its predecessor, the pinnacle of the brand’s expertise and prowess. It’s more than worthy of the hallowed “8”, shared by iconic models like the limited-edition Z8 and the current i8. Look for the first examples to arrive on lots in the next few months.

Users ranked 2019 BMW 8 Series against other cars which they drove/owned. Each ranking was based on 9 categories. Here is the summary of top rankings.

What Does It Mean When Reported As A Lemon On Ad?

what does it mean when reported as a lemon on ad? where do i go to research info?