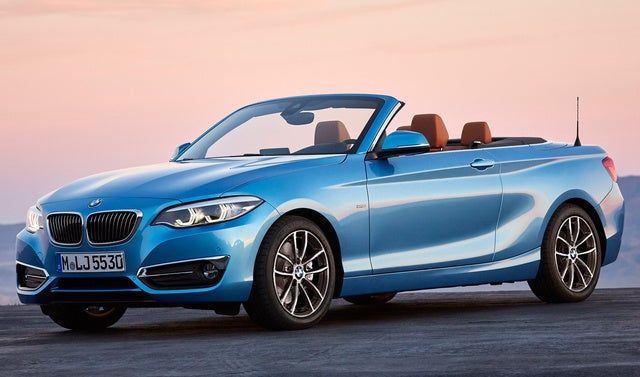 The 2 Series is a smaller and more affordable entry into BMW ownership, but it doesn't skimp on luxury or driving dynamics, making it more than worthy of the famous blue and white badge. The current generation has been around since 2015. It gets some notable updates for 2019, including making several driving aids standard. A high-performance model, called the M2, is also available, covered separately. The standard 2-Series is available as either a 2-door coupe or convertible, in either the four-cylinder 230i or six-cylinder M240i trim. Rear-drive is standard, while xDrive (BMW-speak for all-wheel drive) is available on all models.

The base 230i model comes with a 2.0-liter turbocharged four-cylinder engine. It’s good for 248 horsepower and 258 pound-feet of torque. The M240i is a 3.0-liter straight-six that is also turbocharged, good for 335 hp and 369 lb-ft of torque. All 2 Series models come standard with an 8-speed automatic. To the chagrin of quite a few driving enthusiasts, BMW has axed manuals on several of its higher-tier models. The 2 Series is a holdout for now; a good-old-fashioned 6-speed manual is available as a no-cost option on coupes.

The 2 Series is a tossable car in the world of German luxury automobiles, making it more fun to drive through the twisty bits compared to some of the company’s larger and more powerful models. While any model 2 Series is engaging to drive, an available Track Handling package gives it an added oomph, adding adaptive suspension, variable-ratio steering, and better brakes. The four-cylinder 230i can also include the M Sport package, which lowers the suspension and adds an aero kit, 18-inch M wheels, and an M steering wheel. The six-cylinder M240i comes standard with variable sport steering, adaptive M Sport suspension, a sport exhaust, better brakes, and a rear spoiler.

Even though it’s a lower-tier model, the fit, finish, and features of the 2 Series are up to the high standards that BMW has set for itself. The base model gets 10-way power front seats, dual-zone automatic climate control, parking sensors in the front and back, USB and Bluetooth connectivity, and the iDrive infotainment system with a 6.5-inch screen. An available Convenience package adds self-dimming mirrors, a moonroof, ambient interior lighting, keyless ignition, and satellite radio. A Premium package takes everything from the Convenience package and adds Apple CarPlay, navigation, heated front seats, a heated steering wheel, and a universal garage door opener. Other options on the 230i include a Harman Kardon stereo with 12 speakers, WiFi, wireless device charging, adaptive cruise control, and a self-parking system.

The M240i takes an already nice interior and adds front sport seats with four-way lumbar support, memory settings on the driver’s side, dynamic cruise control, and a sunroof. BMW 2 Series coupes get 11.8 cubic feet of space in the trunk, while convertibles get 9.9 cubic feet.

In crash tests, the 2 Series coupe received top Good scores in most categories with the Insurance Institute for Highway Safety (IIHS), and the 2 Series comes with plenty of active safety features. The 230i comes standard with forward-collision mitigation with automatic emergency braking as well as lane-departure warning and parking sensors in the front and back.

Over the years, BMWs have gotten bigger and bigger, and now the 2 Series is the closest thing to the old E30 3-Series from the ‘80s or the 2002 from the ‘70s: It's a relatively compact, rear-drive coupe with conservative, but clean, styling. Buyers might consider the Audi TT or the Chevrolet Camaro for a similar experience, but the Audi’s looks aren’t to everyone’s taste and the Camaro doesn’t have as nice of an interior. The 2 Series, meanwhile, is a handsome and well-equipped all-rounder that is comfortable enough, capable enough, and fun enough for most any situation.