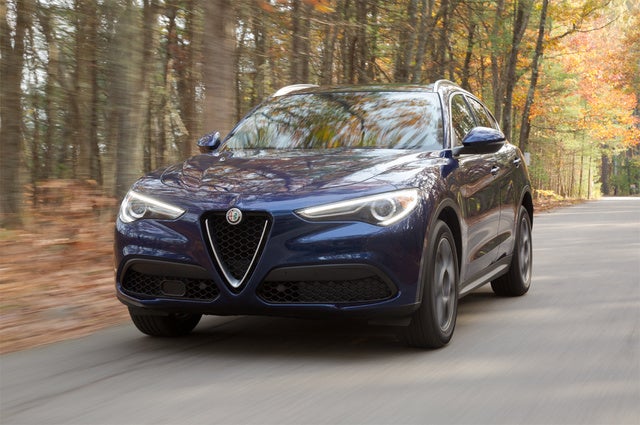 As crossover SUVs have grown increasingly popular, even luxury automakers like Alfa Romeo have begun to release high-end, performance crossovers to enter this growing market. For 2019, Alfa Romeo brings the Stelvio to the US.

The Stelvio is essentially a lifted version of the company’s Giulia sedan, meaning that the two vehicles share pleasingly quick steering and potent engines. The Stelvio is a very new model, so it goes into 2019 with few changes. Rear-wheel drive (RWD) is now standard instead of all-wheel drive (AWD); Apple CarPlay and Android Auto are now included, and the high-performance Quadrifoglio model now gets anodized brake calipers with red Alfa Romeo script and new 20-inch forged aluminum wheels.

New options for 2019 include heated rear seats and a new paint color as well as Nero Edizione and Sport Carbon packages, which are cosmetic upgrades that include either black or carbon fiber accents inside and out. The 2019 Stelvio trims include the base, Sport, Ti, Ti Lusso, Ti Sport, and Quadrifoglio.

Most Stelvios get the 2.0-liter turbocharged four-cylinder shared with the Giulia that makes an identical 280 horsepower and 306 pound-feet of torque. It’s quick for an SUV with its 0-60 coming in 5.4 seconds and a top speed of 144 miles per hour. The only transmission is an 8-speed automatic, and rear-wheel drive is standard while all-wheel drive is an available option. The range-topping Stelvio Quadrifoglio has the same twin-turbocharged V-6 that makes over 500 horsepower. Unlike the Giulia Quadrifoglio, however, the Stelvio Quadrifoglio is AWD. The Stelvio is reportedly one of the agilest and fun vehicles in its class.

The interior of the Stelvio is luxuriously pleasant. The seats are attractive, leather-clad, and well-bolstered while the steering wheel is thick-rimmed and sporty. Higher tier models get more bolstering for the seats, genuine wood trim or leather for the dashboard. Room in the rear is less than ideal and the 18.5 cubic feet of cargo space behind the second row is unremarkable, but few buy an Alfa for maximum practicality. All Stelvios have dual-zone automatic climate control, a 6.5-inch infotainment screen, 8-speaker stereo, and a power liftgate. Heated seats and steering wheel, a larger 8.8-inch infotainment screen, satellite radio, and front parking sensors are all available as add-on options.

What's your take on the 2019 Alfa Romeo Stelvio?

Have you driven a 2019 Alfa Romeo Stelvio?
Rank This Car

Do You Work With Credit Unions