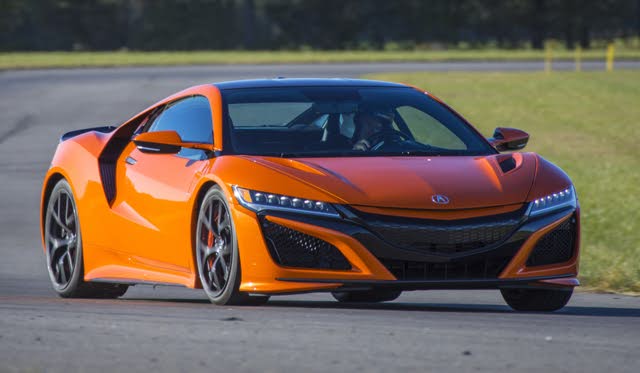 Among the names in high-performance Japanese automobiles, the NSX is one of the all-time greats. While the original NSX was an analog, driver-focused, and track-tuned supercar, the latest NSX showcases cutting-edge hybrid technology. Acura started building the NSX in 2016. The 2019 NSX still offers a fresh design and features notable improvements. Unveiled during Monterey Car Week in California, the 2019 Acura NSX comes with several new paint colors, stiffer stabilizer bars, stickier tires, and tweaks to the car’s software in the interest of performance. The result is a lap time that is two full seconds faster around Japan’s Suzuka Circuit than the 2018 NSX.

The major part of the NSX’s powertrain is the 3.5-liter twin-turbo V6 that sits behind the driver. By itself, it makes 500 horsepower. In front of the internal combustion engine is a lithium-ion battery pack. At the front of the car, an electric motor drives each front wheel for a total system output of 573 hp and 476 pound-feet of torque. The sprint from 0-60 miles per hour takes three seconds flat and the top speed is 191 mph; not the most insane figures on the market right now, but it’s still a quicker car than almost anything on the road and more than enough to get you into trouble.

One would think that the NSX would be a fuel sipper given its cutting-edge hybrid status. It isn’t. The hybrid powertrain harnesses the power of electricity for performance, not efficiency. Sipping premium gasoline, it will return just 21 mpg city, 22 highway, and 21 combined.

At 3,800 pounds, the NSX weighs about a quarter of a ton more than a Corvette, and with a 42/58 weight bias toward the rear, the NSX doesn’t have all the ingredients for a sharp driver’s car. But with aluminum wishbones front and rear as well as magnetic ride control dampers, it’s still a performance-focused automobile. Thanks to stiffer stabilizer bars and stickier tires, the 2019 model is quicker than the previous year. Carbon-ceramic brakes are optional, and the driver can pick between Quiet, Sport, Sport+, and Track driving modes.

The interior of the NSX is befitting a car this expensive. Standard equipment includes leather upholstery, a leather-trimmed instrument panel, keyless ignition, dual-zone automatic climate control, a 7.0-inch infotainment touchscreen, an 8-speaker stereo, and two USB ports. An available option package adds a 9-speaker stereo, navigation, and front and rear parking sensors. Buyers can dress up the interior further with available carbon fiber trim and Alcantara headliner. Buyers have to pay extra for power-adjustable seats. The space in the front trunk measures just 4.4 cubic feet, which is less of an unpleasant surprise when you remember that this is a mid-engine performance car with a bulky hybrid drivetrain. Rear visibility is also reportedly not very good, so the standard reversing camera is a welcome addition.

Expensive cars like this don’t get crash tested, and the kind of active safety features found on much of the rest of the Acura range haven’t made it to the NSX. It gets only a multi-angle reversing camera and hill-start assist.

A convertible version and an even hotter Type-R variant of the NSX may be on the horizon, but for now, there is only one model and it’s still more than exciting. A new NSX is also still a very rare sight on the road, and will always gather a crowd.

Have you driven a 2019 Acura NSX?
Rank This Car