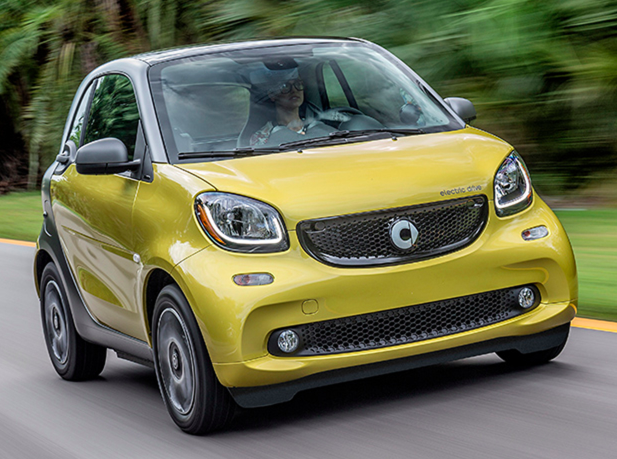 Looking for a Used fortwo electric drive in your area?

The Smart ForTwo has been in the U.S. market for about a decade now. When it first arrived on our shores after its success in Europe, there wasn’t much like it on the road. Since then, a few tiny city cars have been introduced here, but the Smart remains the most famous of them. For 2018, there isn’t exactly a full redesign, but there is a big change in that the Smart Car is now electric-only. Gone is the rear-mounted three-cylinder gasoline engine. Buyers now only have the choice of the electric drive model, which boasts a 60-kilowatt motor. The Smart Fortwo is still available as either a coupe or soft-top cabriolet, and it is still available in the Pure, Passion, or Prime trim levels, which run from under $24,000 at the bottom of the price spectrum to over $30,000 for a loaded cabriolet.

The Smart ForTwo’s electric powertrain makes the equivalent of 80 horsepower and 118 pound-feet of torque driving the rear wheels through a single speed transmission. The motor is powered by a 17.6-kWh lithium-ion battery pack that sits underneath the passenger area.

The urban orientation of the Smart is also apparent when it comes to its driving characteristics. As is the case with pretty much all electric cars, there is plenty of torque available from the motor straight away, which makes the stop-and-go movements endemic to city driving more bearable. When the Smart gets on the highway, however, it starts to run out of steam, and in a world full of trucks and SUVs, its diminutive size can leave occupants pretty intimidated. The configuration of its electric powertrain leaves the Smart with a low center of gravity, and its length (or lack, thereof) allows it to have an incredibly tight turning circle of just 22.8 feet. The Smart is just about the easiest car in the world to park. The ride is reportedly good for a little car with a short wheelbase and a quiet ride, thanks to its powertrain.

The Smart Fortwo has room for just driver and passenger and there are just 9.2 cubic feet of cargo space. Base models are also somewhat basic inside with cloth seats, but with standard features including climate control, cruise control, power windows and Bluetooth capability. Leather seats are optional, as is an eight-speaker stereo by JBL. The Passion model adds flashier colors to the interior, a leather-wrapped steering wheel, retractable cargo cover, and heated mirrors. The Prime model adds contrast stitching on the seats, a leather-wrapped shift knob, a panoramic roof, fog lights, and heated seats.

NHTSA gave last year’s model four out of five stars overall and the IIHS has given it top Good scores in the handful of tests it has conducted on the Smart. Active safety features found in much of the rest of the market are lacking with the Smart, but a reversing camera is standard . Smart adds a feature called Crosswind Assist that automatically gives brake and steering input to act against the gusts that may push the car out of its lane.

It’s worth noting that this electric-only model comes with tax credits and other government incentives. It is also ideal for single urbanites who need to own a car that is navigable and parkable in a big city but also doesn’t need a cavernous trunk and four doors.

What's your take on the 2018 smart fortwo electric drive?

Have you driven a 2018 smart fortwo electric drive?
Rank This Car

Looking for a Used fortwo electric drive in your area?