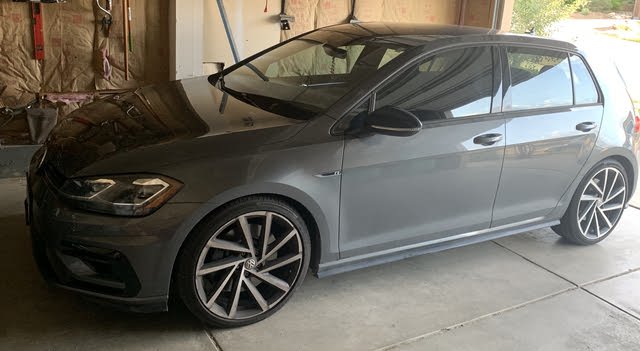 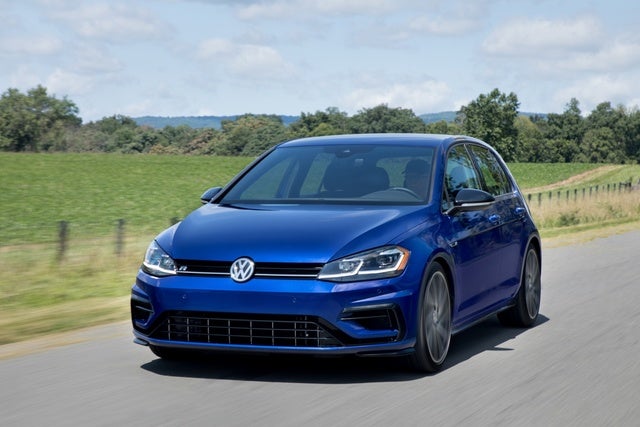 Since its inception, Volkswagen’s Golf has been the heart of the brand. It’s no surprise, then, that the Golf was chosen to carry Volkswagen’s top-of-the-line R performance series. Now in its seventh generation, the Golf family was comprehensively redesigned in 2015. For 2018, the Golf R received a major refresh with many noticeable changes. The front and rear fascias were redone, tweaks were made to the drivetrain, and new infotainment features were added.

The Golf R only comes as a five-door hatchback. Unlike most of its hot hatch competitors, the Golf R is a subtle affair. Car aficionados may mistake it for a Golf or Golf GTI, and non-enthusiasts could outright dismiss it as another economy hatchback. The R can be identified by its unique bumper cover with larger openings for brake cooling and the intercooler, twin LED signatures in each headlight pod, satin-chrome mirror covers, unique side skirts, dual exhaust tips on each side, and a slightly-larger R-specific rear spoiler. All in all, the R’s minimal ornamentation combines with the Golf family’s straightforward, chiseled shape to cut a handsome, understated figure that will age well.

Between the Golf R’s shapely fenders lies a turbocharged 2.0-liter inline 4-cylinder engine making an impressive 292-horsepower and 280-pound-feet of torque. The Golf R goes from 0 to 60 miles per hour in 5.3 seconds with the 6-speed manual transmission or 4.5 seconds with the optional 7-speed dual-clutch DSG automatic transmission, an upgrade from prior 6-speed DSG models. This routes power to all four wheels via a performance-oriented version of Volkswagen’s 4MOTION all-wheel-drive system and can send up to 50 percent of the power to the rear axle via an electronic coupler. The Golf R can brake each wheel individually, simulating front and rear limited-slip differentials. The suspension is unique to the R, riding 0.8-inches lower than an ordinary Golf and 0.2-inches lower than the Golf GTI. Drivers can select from one of four driving modes, Normal, Individual, Eco, and Race. The dynamic chassis control (DCC) system—standard with the DSG upgrade—adjusts each individual damper’s force on the fly, and adds a fifth Comfort driving mode. Steering is improved for 2018, with a new, quicker rack that only requires 2.1 turns lock-to-lock, versus 2.75 turns for the Golf and Golf GTI. The 13.4-inch front and 12.2-inch rear rotors are borrowed from the Golf GTI’s Performance Pack. Fuel economy is 21 miles per gallon city, 29 highway, and 24 combined with the 6-speed manual, or 22, 29, and 25 with the DSG automatic.

Reviewers describe the Golf R as effortless. In normal driving modes, it communicates to the driver just enough of what’s going on while a bevy of computers work unobtrusively to turn a novice driver into a pro. That said, in automatic mode on the DSG version, there is some noticeable turbocharger lag versus competitors, especially in one of the less-aggressive driving modes. Thanks to Volkswagen’s electronic Soundaktor system, simulated hints of audible aggression pop out at just the right times, a throaty exhaust burble or turbocharger whistle. The brakes perform admirably, with minimal fade or wear across a series of high-speed track runs. The electronic stability control system can be completely deactivated via the R’s two-stage switch. Relying solely on the mechanical performance upgrades, the R is a willing, but less-competent track partner. The Golf R performs best when the computers are left in the equation. Buyers looking for more of a mechanical, natural experience may find a better match in another model. The Golf R outshines competition by providing a comfortable daily driver with a ride that’s firm but never punishing. Tighter steering and handling are an asset in city driving.

The Golf R is one of two North American Golf variants assembled in Germany and imported. That’s reflected in the interior, which shares some amenities with the European versions, such as authentic leather seats with race bolstering, an electronic parking brake switch, sliding front cup holder cover, and a frameless rearview mirror. The door sill plates, pedals, and dead pedal are ornamented with a stainless-steel look. Another R exclusive is the new-for-2018 “Virtual Cockpit”, \ consisting of a large LCD in place of the instrument cluster. It provides drivers with various combinations of infotainment and driving data and can be controlled by steering-wheel mounted buttons. The steering wheel is a flat-bottomed unit, shared with the Golf GTI, that could be mistaken for an upscale luxury car. Buyers will be impressed by the Golf R’s neat center stack, dressed in faux carbon-fiber trim, and its minimalistic row of temperature controls. For 2018, there’s a brand-new 8-inch touchscreen infotainment system, which has received high praise in other Volkswagen models for bridging the gap between oft-clunky car interfaces and smooth, snappier ones in today’s leading smartphones. That infotainment system is an integral part of the R’s performance experience, showing diagrams of the car’s drivetrain performance and forming an interface through which the driver can change driving settings. The interior as a whole is upscale and well-executed, far above that of any similar hot hatches, and easily on par with a luxury sedan.

Volkswagen offers the 2018 Golf R in two well-equipped trims, Base and DCC with Navigation. The latter trim adds the aforementioned DSG automatic transmission and DCC options to the experience, as well as automatic start-stop, paddles for manual gear selection and on-board navigation that can be activated on both the infotainment and instrument cluster displays. Otherwise, standard features include a 12-way powered driver seat, Apple CarPlay, Android Auto, and MirrorLink connectivity, three USB ports, satellite radio, a reversing camera, high intensity discharge (HID)/LED adaptive front headlights with LED accents, LED tail-lights, and adaptive cruise control. A sunroof is not offered on either trim.

The Golf R shows an interest in safety and crash prevention not seen in most of its rivals. A whole suite of driving aids comes standard with every unit: forward collision warning, automatic emergency braking with pedestrian detection, blind-spot monitoring, lane-departure warning, cross-traffic detection, front and rear parking sensors, a parking assistant, and front and automatic high-beams. Another safety feature, Volkswagen’s Automatic Post-Collision Braking System, applies the brakes after an initial crash to prevent additional damage from the vehicle sliding into other hazards. If the airbags have deployed, the Intelligent Crash Response system shuts off the fuel pumps, unlocks the doors, and switches on the hazard indicators. The Insurance Institute for Highway Safety (IIHS) last tested the 5-door Golf hatchback in 2017, when it received top ratings of Good in every crash category.

Volkswagen’s Golf R is a commendable performance car that does what other hot hatches cannot, provide performance, comfort, and practicality in equal measure. The mature interior and exterior mean that the R won’t look out of place in any setting. For its base price, just under $40,000, it comes equipped to the roof with high-tech useful features and a lavish cabin. Also new-for-2018 is a warranty that lasts for 6 years or 72,000 miles, both bumper-to-bumper and powertrain. Whether equipped with the 6-speed or the DSG, the Golf R is a solid, alluring choice in a track machine that can double as transport to a formal dinner.

What's your take on the 2018 Volkswagen Golf R?

GuruWNP9B Own one, like it, just right... One can mitigate some of the lag with the DSG via manual shifting... A nice blend of performance, functionality, and a comfortable daily driver ( comfort mode coupled with MA tank roads = decent ride )

Have you driven a 2018 Volkswagen Golf R?
Rank This Car

Anyone have experience with flashing a Golf R?

Buying new Golf R Black-dealer suggested Simoniz glasscoat with lifetime warranty. Is it worth it? Also if I purchase when can you apply regular wax?