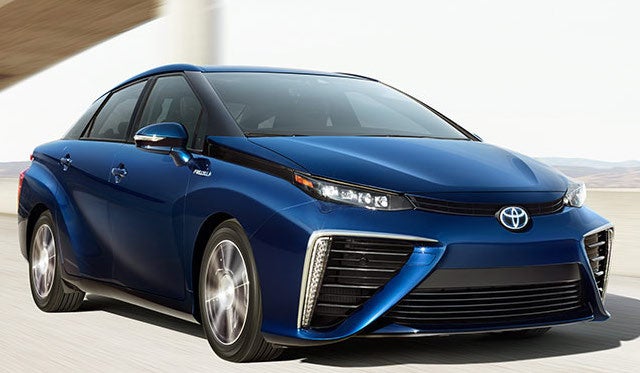 There are niche cars, and then there are hydrogen fuel cell vehicles. They can only really be used in the parts of California that have hydrogen refilling stations and, for what they offer in terms of style, comfort and equipment, they are wildly expensive. But they do have zero emissions (other than H2O) and are seen by some as the way of the future. Toyota introduced the Mirai in 2015, and the low-volume model continues into 2018 unchanged in a single trim level and with few options. Its base price is over $58,000, although many customers will choose to lease.

The Mirai uses a fuel cell stack that combines the hydrogen in its tanks with outside oxygen to generate electricity, which in turn drives the front wheels. The whole system makes the equivalent of 151 horsepower. The 0-60 mile per hour time is quoted at a little over nine seconds. Range is 312 miles. Hydrogen to power the Mirai is only available in the parts of California where the car is sold, although one perk is that Toyota will provide hydrogen for free during the term of a three-year lease.

The interior of the Mirai mostly looks like a conventional car, with notable funky and futuristic elements. Standard equipment includes power mirrors, heated steering wheel and front seats, and navigation. There is also a nifty power socket located in the trunk that can convert the DC current of the fuel cell to AC power, effectively turning the car into a generator for your home. It comes with manual adjust seats and the trunk is short on space thanks to the space taken up underneath by the bulky hydrogen tank. With no internal combustion engine up front, though, it is quiet.

As a low-volume limited market automobile, the Mirai has never been crash tested and likely never will be. Standard safety features include a reversing camera, forward-collision warning, automatic emergency braking, and lane-departure warning.

Have you driven a 2018 Toyota Mirai?
Rank This Car