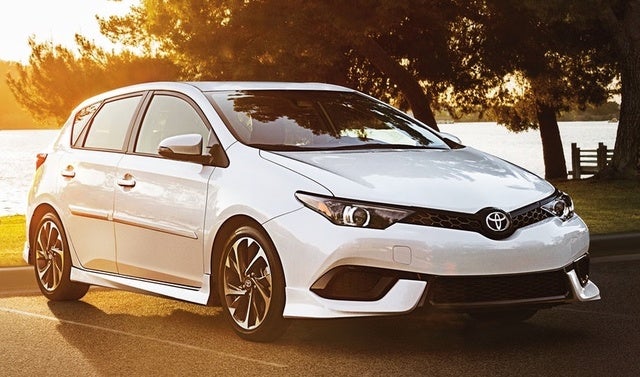 Looking for a Used Corolla iM in your area?

The Toyota Corolla is the world’s best-selling car thanks to its affordable price, practicality, and sterling reputation for reliability. The vast majority of new Corollas on the road are the ubiquitous sedan version, but there is also a hatchback version dubbed the Corolla iM. This car used to be called the Scion iM, but after Toyota retired the Scion brand, the iM was rebadged for the 2017 model year. In most of the rest of the world, it’s sold as the Toyota Auris. It is different enough from the standard Corolla to identify it as a separate model, but the Corolla sedan and iM hatchback share quite a bit. The 2018 Corolla iM is available in only one configuration and starts at under 19 grand. Like its sedan stablemate, the Corolla iM’s main appeal is that it’s a great all-rounder. It’s not really the best in its class at anything, but it does everything reasonably well and doesn’t have any major shortcomings or fatal flaws.

While it does look a bit sporty on the outside, the Corolla iM is powered by the familiar 1.8-liter naturally aspirated 4-cylinder, just like the Corolla sedan. Rated at a modest but adequate 137 hp and 126 lb-ft of torque driving the front wheels, the engine can be paired with a 6-speed manual, but the vast majority will likely have the continuously variable transmission (CVT) that comes standard on the Corolla sedan. In the iM, the CVT includes a Sport mode that features manual shifting. While it makes a bit more power than the Corolla sedan, it’s not really enough to make much of a difference, with 0-60 taking about 9 seconds. Equipped with the manual, the Corolla iM should get 27 mpg city, 35 highway, 30 combined, and with the CVT it will do a slightly better 28/36/31. Other small hatchbacks do better, but these are still impressive figures.

The ride in the Corolla iM is set up for comfort and not precise handling, but the Corolla iM does have a more sophisticated multi-link rear suspension that theoretically gives the hatchback the edge in handling over its sedan counterpart, even though it weighs 73 pounds more. The steering is electronically assisted.

Like the standard car, the Corolla iM features ample passenger room front and rear for a car of its size, and although the interior is different from the sedan's, it still is not luxurious and features the familiar swaths of dark, hard plastic and cloth. In terms of trim level and features, the Corolla iM is roughly equivalent to the Corolla SE version of the sedan. It comes standard with USB and auxiliary jacks, a reversing camera, leather-wrapped steering wheel, adaptive cruise control, Bluetooth compatibility, automatic climate control, leatherette upholstery, 7.0-inch infotainment screen, Pioneer audio, power windows, and power locks. Considering the price tag, that’s a reasonably impressive list of equipment. And because it’s a hatchback, the iM offers more cargo space than the sedan, with 20.8 cubic feet of room behind the rear seats instead of 13.

As small cars go, the Corolla is one of the safest choices you can make, not just in terms of practicality and reliability, but also in terms of actual safety. The Insurance Institute for Highway Safety (IIHS) has given it the coveted Top Safety Pick+ status and the National Highway Traffic Safety Administration (NHTSA) gives it 5 out of 5 stars overall. In terms of features, the Corolla comes standard with Toyota Safety Sense C, which includes a pre-collision system, lane departure alert, and automatic high beams, as well as a reversing camera, automatic emergency braking, and adaptive cruise control.

Predictably, the 2018 Corolla iM is well equipped and reasonably priced, offering a good value for point A to point B transport with enough room for a road trip or even moving a kid off to college. It’s nobody’s dream car, but it will do everything that is asked of it, and with the available 6-speed manual, it will even be reasonably fun to drive.

What's your take on the 2018 Toyota Corolla iM?

Forgarty For the record, mine is a 2017 model that I bought on Oct 31, 3017. t the time I write this, I've owned it for about two months. What I like: chassis rigidity gives it a very solid feel. Handling is better than the official review above, in my view, perhaps due in part to lower profile, wider tires and that multi-link rear suspension. It's relatively quiet for a small car. It comes relatively well equipped. Mileage is good but not great for a small car -- the Civic's 1.5 turbo delivers better performance and mileage. I paid just slightly over $17,000 for mine -- a good value to price ratio. I like the way the car looks, and I like the practical hatchback design. The audio/radio system includes voice control and other gee wiz capability -- you'll have to work hard to learn all its capabilities, though. Weaknesses? Acceleration is pretty weak, if that's important to you. The five-speed manual is ok but not as good many others -- clutch engagement is, oddly, pretty far back; it's challenging coordinating the accelerator with the clutch, especially when starting on a hill. And finding a gear is occasionally more challenging than it should be, due to imprecise gear placement (sometimes referred to as "vague shifting."). The front seats offer no lumbar support, so I provide my own with a small pillow. The lane departure alert system is an annoyance -- I keep mine turned off; it's sensor occupies a rather significant amount of space in an enclosure mounted at the top center of the windshield behind the rear view mirror. The automatic headlight system works fine except when it you want it to regulate high beams -- there are very few circumstances when it will turn on the high beams. Consequently, I turn the automatic system off at night and turn my high beams off and on manually. Despite these criticisms, I like the car overall. I think it offers great value for the money. My top priority is mechanical reliability, and the Corolla's reputation for being bullet-proof was important to me. .

jllevy123 I am very pleased with my 2017 6-speed iM. It handles better than I expected it to. It is a bit lacking in horsepower but still gets out of its own way quite effectively. I paid a bit over $17,000 for mine new. I get about 30mpg combined. The interior is comfortable and the air conditioning is automatic - just set the temp you want and the unit does the rest. Clutch engagement with the manual transmission is buttery smooth. The car gets compliments everywhere I go (partly because of the beautiful blue color) and the Toyota dealer network has been flawless so far.

Users ranked 2018 Toyota Corolla iM against other cars which they drove/owned. Each ranking was based on 9 categories. Here is the summary of top rankings.

Have you driven a 2018 Toyota Corolla iM?
Rank This Car

Looking for a Used Corolla iM in your area?

Can a. Standard wheel fit in the space saver cavity

I just moved to Las Vegas from Philadelphia. I have a 2018 Toyota Corolla IM. During the daybtime in 100+ weather my car lags. When I hit the gas it goes very slow at first then finally catches u...