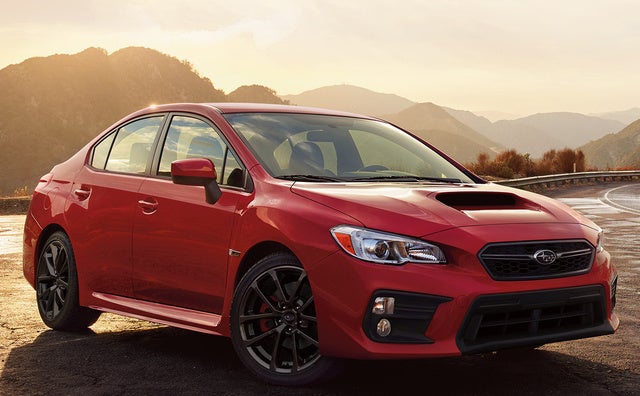 Average user score
4.7 ⁄ 5 stars
Based on 10 reviews
Review by Moodafugova — Excellent choice for wide range of potential car-buyers: 4-door/large trunk practicality; above-avg fuel economy for this level of performance; an ACCESSIBLE power band (max torque @2500-3000rpm/ pea... Read more
Review by Stan — Limited has all the options. Heated leather seats are nice. Read more
Review by Guru99NRSS — The features are excellent, but the price is too high considering that new model years are already arriving at the dealership. Read more

The latest-generation Subaru WRX, now a separate model from the Impreza on which it is based, is still a fairly fresh design. The 2018 model therefore doesn’t make much of a splash when it comes to updates, but both the WRX and its hotter WRX STI sibling do get some cosmetic tweaks and new optional features. Unfortunately for fans of the old WRX hatchbacks, the sedan is still the only body style available.

Compared to the Impreza, the WRX has its own hood, fenders, bumpers, and lights. It still looks like barely more than a hotted-up family car, even though it’s a precisely engineered all-wheel-drive (AWD) performance car underneath the surface. For 2018, the WRX gets a new front bumper, a larger grille, and different black exterior trim. The Limited trim also comes with new steering-responsive LED headlights, which STI buyers get standard, while the Premium trim offers a $2,050 Performance package with Recaro front seats, red brake calipers, and premium brake pads. The 2018 Subaru WRX starts at $26,995, which is a bit more than the comparable $24,775 Ford Focus ST or $25,595 Volkswagen Golf GTI. That said, the WRX is still an all-time favorite among the tuner crowd, and it offers a lot of performance for the money no matter which way you look at it.

Under its skin are the ingredients that have served the WRX so well for years and years: a boxer 4-cylinder engine, a turbocharger, and AWD. The motor is a 2.0-liter 4-cylinder unit with a twin-scroll turbo good for 268 hp and 258 lb-ft of torque. The standard gearbox is a good old-fashioned 6-speed manual, although a continuously variable transmission (CVT) is an available option. Manual models come with an AWD system with a viscous coupling that divides power 50:50 front-to-rear but can split torque from side to side as well. CVT models get a slightly different AWD system, with several driving modes that alter the shift pattern and a 45:55 front-to-rear power split. For a 4-cylinder car, the WRX has never been all that frugal on gasoline. 2018 models should get 21 mpg city, 27 highway, and 23 combined with the manual and 18, 24, and 21 with the CVT, which certainly isn’t terrific but is livable. Because of its performance-tuned, turbocharged engine, the WRX also runs on premium gas.

With a flat-four engine sitting low in the chassis and rally-bred underpinnings, the WRX is a tight-feeling driver’s car under its somewhat pedestrian appearance. The latest model has revised suspension settings as well as small changes to the shifter and electric power steering system for improved handling, not that the car needed it.

The WRX has never been about showing off, focusing instead on the business of driving and driving quickly, and therefore typically has an interior that’s even less exciting than its bodywork. The 2018 model still doesn’t look like much on the inside, but it does get the latest version of Subaru’s Starlink infotainment system, a larger 6.2-inch screen, and supposedly better-quality interior materials (such as the available leather upholstery). Standard features include new heated exterior mirrors, automatic climate control, steering-wheel audio controls, and a multifunction display with a turbo-boost gauge and traction monitor. At the top of the WRX lineup, the Limited trim gets a 10-way power-adjustable driver’s seat and exclusive available options such as a navigation package with blind-spot detection, rear cross-traffic alert, and a Harmon Kardon audio system.

Mark I own a '16 WRX, 6-SPM of course, and I think he's pretty much right on. I've been in Subaru AWD since 1999, and he pretty much hit on all the real points. Like many a Rex driver, I have a little GTI envy every once in a while. Don't get me wrong, the WRX is a better driver, but it does have a very Subbie cabin, kind of spartan. This is maybe the best WRX I've driven, and driven a few, but it's still a Subaru, from it's symmetrical AWD to that EJ series 2.0 liter which so eagerly moves the car along. I loved my '06, a far more worthy rally/banzai machine, with higher ground clearance and the old FZ 2.5 liter motor. This car is far more of a sports car, a road beast.

Users ranked 2018 Subaru WRX against other cars which they drove/owned. Each ranking was based on 9 categories. Here is the summary of top rankings.

Have you driven a 2018 Subaru WRX?
Rank This Car

would like to put a newer subaru engine in a 2014 WRX body. Will it fit?

What Are My Options For Putting A Front License Plate On A 2018 WRX?