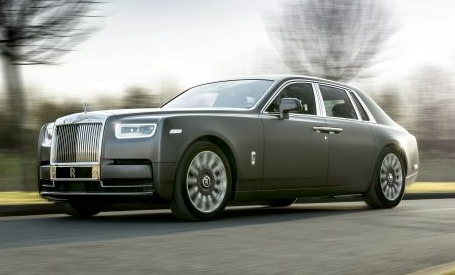 The seventh-generation Rolls-Royce Phantom needs no introduction. With its famous shape, massive proportions, and unbelievable luxury, it has quickly risen to be a premier symbol of extravange for the ultra-wealthy. The first contemporary Phantom, Series I, rolled out of Rolls-Royce’s then-new Goodwood factory in 2003. Series II, introduced in 2013, updated the technology and styling. Now, for 2018, Rolls-Royce is introducing a brand-new 2018 model that promises to be bolder and better than ever before.

The new Phantom’s styling is an evolution of the prior generation’s retro-modern look. The surfaces are smoother and the panels are less overwrought. It works because Rolls-Royce took only the most obvious details from the baroque older model—the prominent, squared-off front end, the upright profile, the three-box window shape, the reverse-hinged rear “coach doors”—and worked them into a shape that is thoroughly modern. The Phantom’s exterior features are simplified, too. The radiator, now grille, stretches over the hood and front fascia like a taut skin of chrome. The exterior lights are full of detailing, but they will mostly be visible as solid LED signature outlines. The curved beltline returns, but it makes a more graceful arch toward the sedan’s tapered tail end. There are two body styles, a standard length and an extended-wheelbase version. The latter has about 8.3 inches over the former, all going to add rear passenger space.

Inside, there’s been a similar transformation; everything is far less old-world than before. There are still ample amounts of wood, metal, and glass, but they’re formed into contemporary curved shapes. An expanse of wood crosses the entire width of the dashboard and forms most of the center stack. The HVAC and radio controls are set within it. The upper area contains a full-LCD instrument panel and giant LCD infotainment system, and a mobile art gallery: Most of the right portion of the dashboard, set behind a single pane of glass, is a three-dimensional panel meant to showcase bespoke art commissioned at the factory. Rolls-Royce calls this area the “Gallery.”

Sitting under that elongated hood is a twin-turbocharged 6.75-liter 12-cylinder engine. Though this engine’s origins lie with the 6.6-liter V12 that’s in the lesser Ghost and Dawn models, Rolls-Royce put a significant amount of work into the new unit, and it shows. While power stays the same as the smaller variant at 563 horsepower, there’s 664 pound-feet of torque—an increase of 133. In keeping with the Phantom’s effortless nature, all of that power is available at just 1,700 RPM. Power is sent exclusively to the rear wheels via an 8-speed automatic. The wheels feature active anti-roll bars and dampers and an air suspension setup that uses cameras to prime the car to compensate for potholes and other road irregularities before reaching them. The rear wheels can turn up to 3 degrees to improve the car’s steering during low-speed maneuvers.

The Rolls-Royce Phantom is the last word in luxury. Its customer care specialists are happy to help buyers customize every aspect of their Phantom to their hearts’ content—even down to color-matching the leather to a favorite flower. The 2018 Rolls-Royce Phantom is more than worthy of the famed “Spirit of Ecstasy” figurine that sits proudly at its bow. Rolls-Royce is currently taking orders for and delivering the all-new 2018 Phantom.

What's your take on the 2018 Rolls-Royce Phantom?

Have you driven a 2018 Rolls-Royce Phantom?
Rank This Car