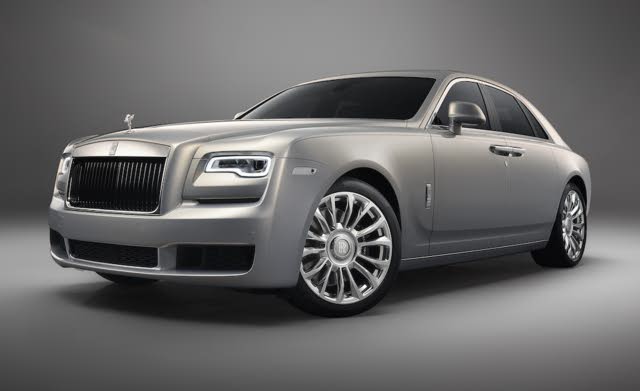 Rolls-Royce presents some subtle updates to its Ghost for 2018, while celebrating the 111-year anniversary of a unique achievement with a limited-edition trim. Four years since the debut of the Ghost Series II, Rolls continues its mission of constant refinement with a much-needed update to the infotainment system as well as additional sound-deadening materials for a quieter cabin.

Despite a lavishly high base price, the Ghost’s technology has lagged behind economy cars, with a sluggish interface and a lack of modern features. To combat this, an updated infotainment system is more responsive and can now boast amenities like natural speech recognition and real-time traffic information. And to make sure drivers don’t miss a single word, more sound-deadening has been added in the doors, rear wings and luggage compartment, as well as new acoustic film in between the layers of glass in the side and rear windows.

Outside, the front end receives some attention as well with a sculpted bumper featuring more prominent horizontal design elements and a more pronounced front grille with deeper vertical slats to emphasize the transition back to the front fenders. Capping it all off is two new 21” wheel designs that will immediately set the 2018 Ghosts apart from previous examples.

But more exciting is the announcement of a commemorative “Silver Ghost” edition, limited to 35 examples assembled at RR HQ in Goodwood, West Sussex. Back in 1907, Charles Rolls and Claude Johnson drove the 12th 40/50hp Ghost chassis mated to a Barker & Co 4/5 seater touring body an astonishing non-stop, long-distance endurance record of 14,371 miles. Among the unique touches to these bespoke barges are changes both sweeping and specific, including a special “Cassiopeia Silver” paint job that takes 8 hours to apply and incorporates 100% silver into the mixture. Move in a bit closer and you’ll see a 100% sterling silver Spirit of Ecstasy muse engraved with “AX201” on the base in honor of the original Silver Ghost’s registration plate. It sits on a black-gold-plated collar base with copper insert that calls back to the copper used in the engine by of the original Silver Ghost. Additionally, the grille veins have been painted black in another callback to the original grille. Finally, the wheel centers have been engraved with “Silver Ghost - Since 1907.”

The 35 lucky buyers will also be treated to forest green leather and silver trim throughout the cabin, including the panniers, clock, and tread plates, and the RR umbrellas in each door are edged in a silver-color binding with an open-pore, Tudor-oak handle. Additional touches include a Silver Ghost pen, sunglasses/accessories case and picnic hamper.

Regardless of whether drivers pick the regular Ghost or the Silver Ghost, they'll be treated to an upgraded, 6.6-liter, 563-horsepower and 605-pound-feet version of the 6.0-liter V12 that powers the BMW 750Li. Paired solely to an 8-speed automatic transmission which sends power to the rear wheels, it’ll propel the 5,500-lb Ghost to 60 mph in just 4.7 seconds and will top out at an electronically-limited 155mph. With numbers like that, don’t expect much in the efficiency department as 12 city, 19 highway and 14 combined are the best the EPA estimates you’ll get. That said, if drivers are able to afford the starting price, the cost of gasoline may not fall on their radar.

What's your take on the 2018 Rolls-Royce Ghost?

Have you driven a 2018 Rolls-Royce Ghost?
Rank This Car