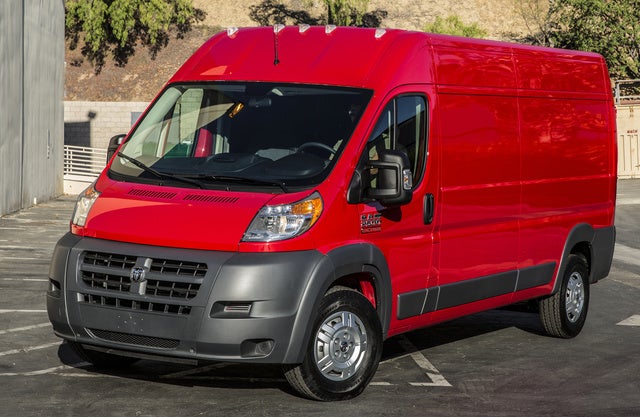 The full-size Ram ProMaster is tall and cavernous on the inside while also being eminently configurable and even highly maneuverable, making it one of the top choices for commercial clients, road trippers, and even the U.S. Postal Service. Available in three wheelbases and several body-style combinations, there are a total of 14 different ways to configure a ProMaster, and for 2018 Ram has added a reversing camera and Bluetooth compatibility as standard equipment.

In terms of full-size commercial vans, the ProMaster is unique in that it has front-wheel drive (FWD). People intending to use their van for towing or hauling lots of cargo will therefore probably opt for a more traditional rear-wheel-drive (RWD) choice, but the ProMaster’s driveline configuration means it has a lower load floor and a tighter turning radius. Engine choices are a 3.6-liter V6 with 280 hp and 260 lb-ft of torque or a 3.0-liter 4-cylinder turbodiesel rated at 174 hp and 295 lb-ft of torque. The V6 model comes with a 6-speed automatic, while diesel models come with a 6-speed automated manual that has been criticized in the past for clunky shifts. The ProMaster features a 24-gallon fuel tank, and although fuel-economy figures are not yet available, the turbodiesel will most likely end up with a slight edge.

One of the strong suits of the ProMaster is its tight turning radius, which serves urban users well. Shorter 118-inch wheelbase models have a turning radius of just 36.3 feet, and even the longest 159-inch versions turn around in just 46.8 feet. The ProMaster has an independent suspension up front and a solid rear axle, which is pretty standard in the world of commercial vans. Even low-roof versions are quite tall, so expect substantial body roll and somewhat ungainly handling when cornering quickly, although most ProMasters won’t be driven anywhere near the limit.

By nature of its commercial customer base, the ProMaster is highly configurable for individual needs. The front passenger area has lots of room and numerous storage spaces for smaller items, and the driver’s seat can be ordered with lumbar support or as either a suspension seat or a swivel seat. Heated front seats, satellite radio, an integrated navigation system, and a 4G LTE Wi-Fi hotspot are other options, while the ProMaster comes standard with a 5.0-inch touchscreen for the audio system, power windows, and air conditioning. In the rear, options include tie-downs, shelving mounts, a spray-in bedliner, and extra lighting. The largest versions offer a very impressive 463 cubic feet of cargo space. There is no passenger version of the ProMaster, although it could theoretically be outfitted with aftermarket seats and other features by an ambitious road tripper who doesn’t want to step up to a full-size RV or travel trailer.

The ProMaster has not been crash tested, but for 2018 a reversing camera was added as standard equipment, and rear parking sensors are an optional extra on the cargo version. Other high-tech features like collision warnings or automatic emergency braking are not available. The ProMaster is an awkward-looking vehicle, much like the Fiat Ducato on which it is based, but it is geared toward commercial clients who don’t much care about having the most graceful thing on the road. Because different commercial clients have different needs, the ProMaster is highly configurable and something of a blank slate for customers to deck out however they wish. The ProMaster is practical enough that the U.S.P.S. has outfitted thousands of them as mail trucks. While nobody dreams of driving the same car as the mailman, it’s still a sound endorsement. With 14 different body/wheelbase combinations, there is a ProMaster for every need, and customers who don’t need as much room or could do with a smaller footprint might want to look at a smaller ProMaster City van.

Ron Awkward entry for front driver and passenger seats. Seat sits to high, you look through top of windshield. Seriously homely front end styling. The current Fiat Ducato grill and headlight design is much more attractive. It’s the european design van the Promaster is based on.

Users ranked 2018 RAM ProMaster against other cars which they drove/owned. Each ranking was based on 9 categories. Here is the summary of top rankings.

Have you driven a 2018 RAM ProMaster?
Rank This Car