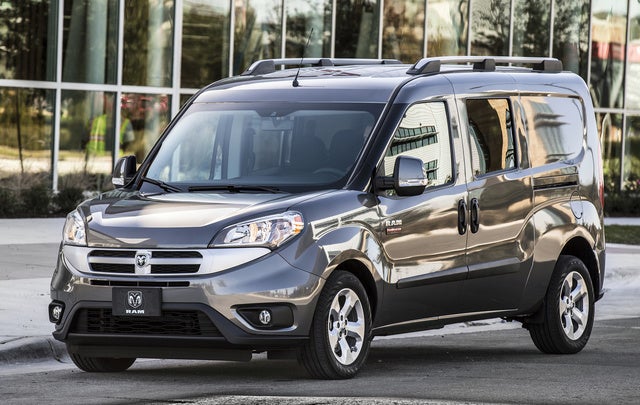 Those who are shopping for a small urban commercial van have a surprising number of choices. The Chevrolet City Express, Nissan NV200, Mercedes-Benz Metris, and the popular Ford Transit Connect are all tempting options, and the Ram ProMaster City is Chrysler’s entry into this competitive segment. A smaller, more maneuverable and city-friendly version of the full-size Ram ProMaster, the ProMaster City is more powerful than its Nissan and Chevrolet rivals, but smaller than the Ford and the Mercedes. Unlike the highly configurable full-size ProMaster, the ProMaster City is available in only two versions: cargo and passenger wagon. These are available in either base or SLT trim levels. For 2018, the only significant changes are the addition of a reversing camera as standard equipment.

Under the stubby hood of the ProMaster City is the familiar 2.4-liter 4-cylinder also used in the Jeep Compass and several other Chrysler vehicles. It is rated at an adequate but unremarkable 178 hp and 174 lb-ft of torque, which is sent to the front wheels via a 9-speed automatic transmission. The engine makes enough power for scooting around town, but it doesn’t have much more than adequate steam on the highway. The 9-speed has also been criticized for awkward shifting in urban settings, where nine forward gears are probably a few too many. The front-wheel drive (FWD) configuration makes it maneuverable in urban areas, but it doesn’t have enough grunt for serious hauling. Fuel economy is respectable but unremarkable, with a rating of 21 mpg city, 28 highway, 24 combined. Handling has been praised for being relatively direct and precise, while the ProMaster City has a tight turning circle that will come in handy for deliveries in congested places like Manhattan or Boston.

The ProMaster City has a basic, utilitarian interior with lots of low-cost plastic, but it is also practical. It has numerous cubbies for smaller items up front, where the seats can be had in either cloth or synthetic leather. Standard equipment includes a 5.0-inch touchscreen, Bluetooth compatibility, power windows, power locks, and steering-wheel-mounted audio controls. The SLT trim level adds cloth upholstery, an integrated navigation system, and body-color bumpers. Other options include a Wi-Fi hotspot, hinged rear doors (dual sliding doors are standard), heated front seats, and a leather-wrapped steering wheel. Unlike the full-size ProMaster, the ProMaster City has a passenger configuration option, and it even offers an optional taxi configuration.

Passenger models have a second row of seats that fold 60/40 as well as extra sound-deadening insulation. Most examples will probably be outfitted as the cargo version with no rear seats or rear windows. These have a bit less insulation, a maximum payload of over 1,880 pounds, and 132 cubic feet of cargo space, which isn’t a huge amount, but should be more than enough for most contractors and a fairly impressive number for a vehicle with a footprint as small as this. Ram also offers numerous accessories that make it easier to configure the cargo area for individual commercial needs.

The ProMaster City has not been crash tested, but a reversing camera has been added as a standard feature, and rear parking sensors are optional on all models. Other high-tech safety features like forward-collision warning or automatic emergency braking are not available. While the ProMaster City is arguably the most awkward-looking of the bunch, pretty much all of these smaller commercial vans have the same basic tall, ungainly shape to them, and the ProMaster City is a highly competitive offering in its segment. With a starting price of around 24 grand, it is configurable and customizable for various needs, maneuverable in the city, and reasonably good on gas. The passenger version may not transport passengers in sumptuous luxury, but it will carry three extra people in reasonable comfort without sacrificing much cargo space.

What's your take on the 2018 RAM ProMaster City?

Have you driven a 2018 RAM ProMaster City?
Rank This Car

What does Avga/100 mean on dash cluster?