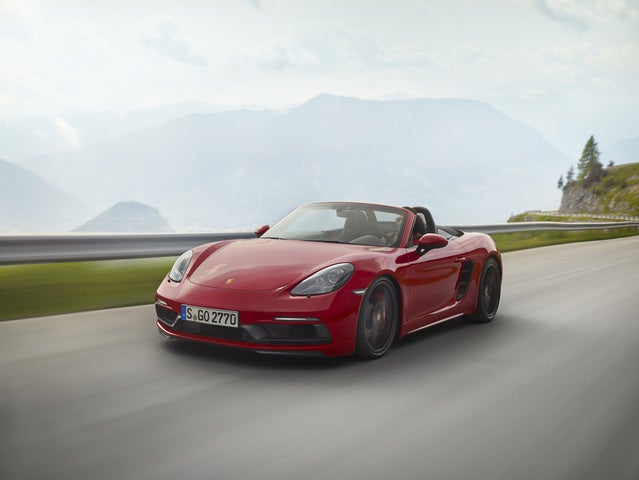 A year after Porsche gave its entry-level convertible roadster an extensive fourth-generation makeover, rechristening it the 718 Boxster, the German automaker unveils a new high-performance GTS trim, which joins the existing base 718 Boxster and 718 Boxster S in the lineup for 2018. Building on the S trim and mimicking similar GTS versions of the 911, the Macan, and the Cayenne, the 718 Boxster GTS comes standard with a number of Porsche's top performance features, typically only available as options on the lower-end trims. The GTS also establishes itself as the fastest Boxster currently available, making the dash from 0-60 mph in just under 4 seconds, thanks to its 2.5-liter flat-4 engine, which it shares with the S trim. Tweaked for use in the GTS, the turbocharged engine pumps out 365 hp, an increase of 15 hp over the Boxster S and 35 hp over the base Boxster, making the GTS a true street racer with plenty of performance car credentials.

Outside, a number of features distinguish the GTS from the other Boxster trims, starting with black exterior accents on its unique Sport Design front fascia, on the lower rear fascia, around the side air intakes, and beneath the rear spoiler. The GTS also gets tinted front turn signals and taillights, black badging, and black-tipped dual exhaust pipes as part of the roadster's upgraded sport exhaust system. Matte black 20-inch wheels round out the GTS's exterior upgrades.

The GTS sits at a slightly lower ride height than its stablemates, by 0.39 inches, due to its active sport suspension with the Porsche Active Suspension Management (PASM) system as a standard feature. Borrowed from the 911, PASM optimizes both comfort and road grip by giving drivers the ability to switch between Normal and Sport modes, which make adjustments to the hydraulic dampers and steering to reduce body roll and improve stability under tight cornering and aggressive maneuvering.

Engine refinements made specifically for the GTS include a revised intake plenum and a retuned turbocharger, which provide the additional horsepower. Torque depends on the transmission selected. In its standard configuration, like all of the automaker's GTS variants, the Boxster GTS comes standard with a 6-speed manual transmission, though buyers can opt for a 7-speed Porsche Doppelkupplung (PDK) dual-clutch transmission. With the manual transmission, torque tops out at 309 lb-ft, matching the torque in the S trim, but with the PDK transmission torque jumps to 317 lb-ft.

Those numbers are reflected in the GTS's 0-60 times, with the manual-equipped GTS making the run in 4.4 seconds. When outfitted with the PDK, the GTS makes the same dash in just 3.9 seconds. In both configurations, the engine sends power to the rear wheels. Fuel economy numbers for the GTS have not yet been released, though the S trim manages 20 mpg city, 26 highway, 22 combined with the manual transmission and 21, 28, 24 with the PDK. Numbers for the GTS should hover in the same general territory.

A Sport Chrono package, standard with the PDK transmission, helps the GTS achieve its 0-60 time of under 4 seconds. Working with the PDK and the PASM system, the Sport Chrono package gives drivers the option of choosing between Normal, Sport, Sport Plus, and Custom driving modes, which make adjustments to the engine, chassis, and transmission shift points to deliver optimal ride and handling in all types of driving situations. When equipped with the manual transmission, the GTS comes with the Porsche Torque Vectoring (PTV) system, which includes a rear limited-slip differential. Porsche Torque Vectoring applies the brake on the inside front wheel during tight turns to ensure stability.

In addition to its exterior and engine upgrades, the GTS receives a number of unique interior features, and almost all of them involve the use of the luxurious material Alcantara. It covers the center console armrest, door armrests, and steering wheel rim, as well as the centers of the upgraded sport seats. The seats, which provide improved high-lateral support, have the GTS logo embroidered on the headrests. Trims equipped with the PDK and Sport Chrono package get a chronometer mounted in the center of the dashboard. In addition, when buyers opt for the available Navigation Module and Connect Plus packages, the Sport Chrono Package includes the Porsche Track Precision App, which makes it easy for drivers to keep track of performance driving data on their smartphones.

With the GTS newly introduced into the lineup, the base 718 Boxster and 718 Boxster S remain unchanged for 2018. As part of the fourth-generation update in 2017, both trims received new turbocharged engines, reflected in the name change to the 718 Boxster. A 2.0-liter turbo 4-cylinder engine continues to power the base Boxster trim. Delivering 300 hp and 280 lb-ft of torque, it drives the roadster from 0-60 in 4.9 seconds with the 6-speed manual transmission. When equipped with the PDK, the base trim makes the same journey in 4.7 seconds, and with the Sport Chrono package added on, it zips to 60 mph in 4.5 seconds. Fuel economy numbers for the 2.0-liter engine check in at 21, 28, 24 with the manual transmission and 22, 30, 25 with the PDK.

The 718 Boxster S upgrades to the 2.5-liter 350-hp turbo 4, which also mates to either the manual transmission or the PDK. It reaches 60 mph from a standstill in 4.4 seconds with the manual, which drops to 4.2 seconds with the PDK and 4 seconds flat with the Sport Chrono package. All trims feature a mid-engine layout, which places the engine no more than a foot behind the driver in a horizontally opposed position. Benefits include a throaty engine note in the cabin, efficient operation, a low center of gravity, improved cornering and stability, and overall weight reduction.

All 718 Boxsters display the same sleek, sporty exterior design, highlighted by a low nose, a long sloping hood, large wheel wells, scooped-out sides, and muscular hindquarters. The Boxster's fabric convertible top opens and closes at the push of a button in 9 seconds at speeds up to 31 mph. HID headlights with daytime running lights come standard on all trims, with LED headlights available as an option. The base trim gets a single exhaust pipe, while the S upgrades to twin centered pipes, like the GTS. The base trim rides on 18-inch wheels, while the S wheels are an inch larger.

Inside, the ergonomically designed two-passenger cabin emphasizes comfort, sportiness, and ease of operation. The redesigned instrument panel features a tachometer in the center position, as well as a 4.6-inch color screen, which displays pertinent driving data. A sport steering wheel comes standard, with a smaller, optional GT steering wheel available.

The sport seats provide good support, and buttons and controls are within easy reach on the ascending center console. Standard tech features include the Porsche Communication Management system with cell phone integration, a rearview camera, and a 110-watt audio system with 6 speakers. Options include a 10-speaker, 505-watt Bose audio system and a 12-speaker, 821-watt Burmester system.

Cargo space remains tight, with just 5.2 cubic feet available in the front of the vehicle under the hood and 4.4 cubic feet in the rear. Although the 718 Boxster comes fully equipped with a range of airbags, safety features like blind spot alert, adaptive cruise control, and forward collision warning remain optional. The National Highway Traffic Safety Administration (NHTSA) and the Insurance Institute for Highway Safety (IIHS) have not safety-rated the 718 Boxster.

With its stellar performance, agile handling, sporty good looks, and comfortable cabin, the 718 Boxster continues to receive positive comments from owners and critics alike, some of whom consider the Boxster to stand at the top of its class against competitors like the Audi TT, the Mercedes-Benz SL-Class, the Nissan GT-R, and the Chevy Corvette.