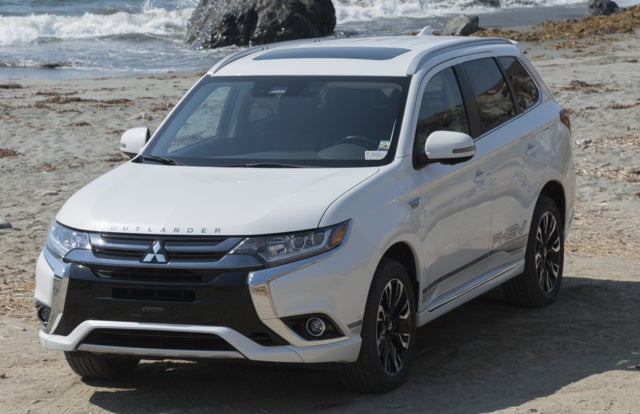 Average user score
5 ⁄ 5 stars
Based on 1 review
Review by Steven — Great PHEV, goes about 40 miles on battery charge, which is enough for most days around town, and very nicely appointed. Read more

The Mitsubishi Outlander PHEV has been available for some time in Europe, where it has enjoyed strong sales but has faced delays in coming to the US market. Now, after four years, the plug-in hybrid crossover has finally arrived.

It all starts with the foundations of the current Outlander crossover, which has been around since 2013. From there, it’s easy to tell the Outlander PHEV apart from its gas-only counterpart. If the unique front and rear bumpers and side skirts don’t give it away, the big “PHEV” graphics down the sides definitely do. Another distinguishing feature is that the vehicle’s model name is spelled across the leading edge of the hood in bold letters. Furthermore, unlike most other plug-in vehicles, Mitsubishi doesn’t place the charging-port door on the front fender; rather, it’s on the rear right fender, sitting opposite to the gas fill-up door on the left rear fender.

Stepping inside, things are a little more normal for the Outlander PHEV. It has a different steering wheel, instrument cluster, and gear selector than the gas-only Outlander, sure, but it doesn’t scream “hybrid.” Things are definitely higher-quality on the PHEV, though. The airbag cover is stitched, and the standard leather on the seats is a nicer variety with contrast stitching throughout. And speaking of seats, the Outlander PHEV is strictly a five-passenger affair, unlike the ordinary Outlander, which seats seven. However, in exchange for removing the third row, Mitsubishi claims it didn’t have to intrude upon the interior at all in fitting the new electric equipment beneath the car. There’s still 30.4 cubic feet of cargo space, which doubles with the rear split-folding seats down, and the second-row seats both slide and recline.

Being a hybrid, the Outlander PHEV benefits from both electric and gasoline propulsion. Under the hood, there’s a 2.0-liter inline 4-cylinder, 117-horsepower engine that acts as either a generator or works in tandem with a 60-kilowatt electric motor to power the front axle, which negates the need for a transmission. At the PHEV’s rear axle, there’s a second 60 kW electric motor and a 12 kWh battery. Combined horsepower for the system is 197 hp.

Tying both axles together for all-wheel-drive capability is a version of Mitsubishi’s Super All-Wheel Control (S-AWC) setup. In addition, drivers get to choose from one of three modes for special behavior. Battery Save Mode conserves the battery pack by operating in hybrid mode. Battery Charge Mode will run the engine in order to generate electricity for the battery. And ECO mode will reduce both fuel and electricity usage for efficient travel. Otherwise, the Outlander PHEV uses its own logic to determine how best to use the engine and/or battery.

The all-electric range for the PHEV is 21 miles, a figure that’s actually quite impressive for a near-5,000-pound crossover. The battery recharges in around 8 hours on a standard 120-volt household outlet or around 3.5 hours with a 240 volt supply. In addition, the Outlander PHEV is the only plug-in hybrid that makes use of DC fast-charging with the CHAdeMO standard. A DC fast-charging station will bring the Outlander PHEV’s battery pack to 80 percent capacity in about 25 minutes. Otherwise, the crossover’s fuel economy is 74 MPGe in hybrid mode or 25 MPG combined in gasoline-only mode. Total range is around 310 miles.

Stepping up to the GT trim for $40,295 unlocks additional features, such as LED headlights, LED fog lights, a power sunroof, a 710-watt audio system with 9 speakers, a heated steering wheel, and a 1500-watt AC power supply with two outlets.

As far as safety, the Outlander PHEV gets all of the latest and greatest. A reversing camera, blind spot monitoring, and lane change assistance are standard. GT tacks on lane departure warning, forward collision mitigation, adaptive cruise control, and automatic high beams.

The Outlander PHEV is uncharted territory for Mitsubishi in the USA, but it has been successful elsewhere. Here, it provides an SUV with high usability, a giant list of standard features including AWD, and very low running costs in hybrid or electric mode. Moreover, it qualifies for a $5,836 tax credit from the federal government, making the premium over a comparable non-hybrid Outlander almost negligible.

What's your take on the 2018 Mitsubishi Outlander Hybrid Plug-in ?

Michael Will buy next year

RobertoDFW Plan to buy next year 2019 model unless they have a nice discount on 2018 inventory.

Have you driven a 2018 Mitsubishi Outlander Hybrid Plug-in ?
Rank This Car

Is SVG Motors A Real Company - All Their Numbers Have Been Disconnected.

I am trying to buy a car from SVG motors. I put $100.00 down on a vehicle to hold it. Now I can't get in touch with anyone to complete the paperwork. I submitted the credit card information to ho...