The Eclipse Cross shows real promise for the future of Mitsubishi, but still falls flat on some basic criteria. 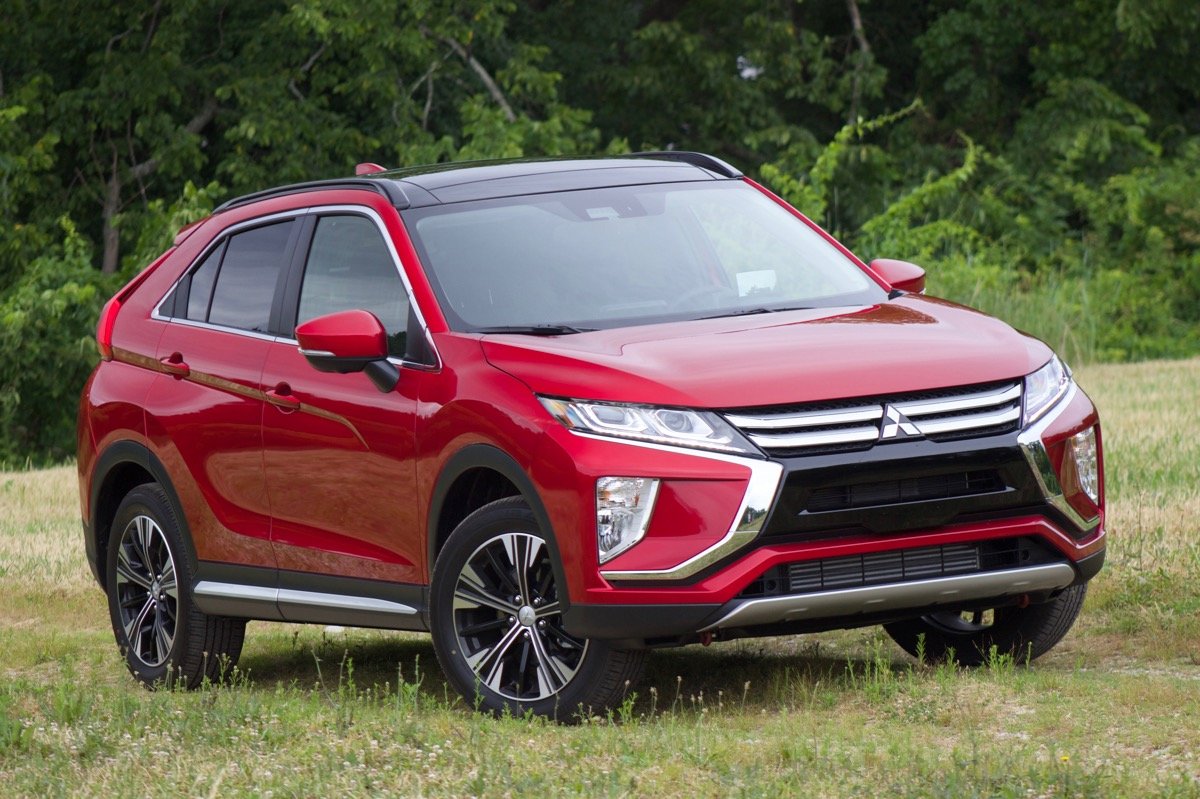 If you grew up in the 1990s and early 2000s, the name “Eclipse” carried some significance. It hasn't aged as well as the Toyota Supra or Nissan Skyline GT-R, but it was still a cornerstone of import-tuner culture.

This is the context needed when considering the 2018 Mitsubishi Eclipse Cross. A company as small as Mitsubishi has a hard time keeping up with bigger car companies. But in 2016, Nissan bought a large stake in Mitsubishi and began to breathe new life into the brand, with the promise of some exciting new products.

The latest new car to come out of that partnership is the 2018 Mitsubishi Eclipse Cross. It is a compact crossover, which is a smart move for the brand—small SUVs are the hottest market among new cars. But using the “Eclipse” name on a crossover? The enthusiasts will not be happy. Then again, if Mitsubishi sells a lot of them, that really won’t matter. Mitsubishi hopes to capture some of its heyday with this new compact crossover, but is it enough to help the brand stay relevant? 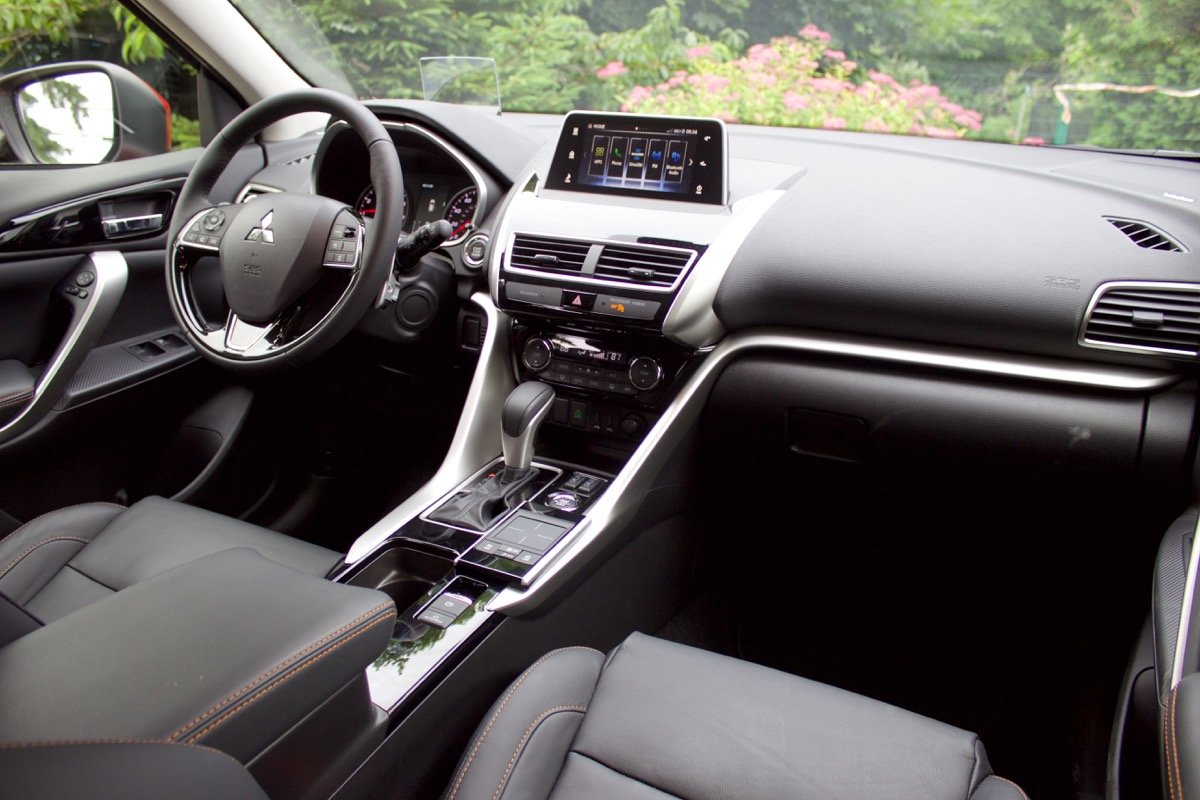 The Eclipse Cross features a sharp design that conveys speed and action. It has a handsome front end, with plenty of acute angles. The profile has a high-riding fastback shape, which looks racy, but actually cuts down on rear cargo space, as I’ll explain later.

And the rear of this vehicle is something else. It has strange angles and bulbous curves. The split rear window conjures up memories of the Honda CRX, which is good company. But take a step back and take it all in. The weird angles feel more like the rear end of the Pontiac Aztek—definitely not good company.

Interior styling is fine at first glance, but upon a closer look, there are some issues. You’ll notice a lot of parts shared with Mitsubishi’s dated Outlander, like the heated seat buttons and the circular temperature buttons. Dials would be much better here.

The Eclipse Cross is available in ES, LE, SE, and SEL trims. The base ES comes standard with fog lights, LED taillights, 16-inch alloy wheels, Bluetooth connectivity, and a multi-function steering wheel. It also has a 7-inch touchscreen infotainment system and a USB port, which is prominently placed in the middle of the console for easier access.

Our range-topping SEL test model added LED headlights, soft-touch door-trim inserts, and an 8-way power-adjustable driver's seat. Yes, it's a bit sad that you need the range-topping trim to get a power driver's seat. Other features on the SEL include leather upholstery, an upgraded reversing camera with multiple views (including a 360-degree view), and a head-up display (HUD). The HUD is helpful enough, but as I'll explain shortly, it doesn't quite feel like a finished product.

Our test model came with optional features such as heated rear seats, a heated steering wheel, and a Rockford-Fosgate premium audio system. It also came with an optional dual sunroof (not to be confused with a dual-pane sunroof like in many new cars). There is a lot of promise with this car; the Eclipse Cross is supposed to be Mitsubishi turning a corner. Instead, it feels like an incomplete effort. 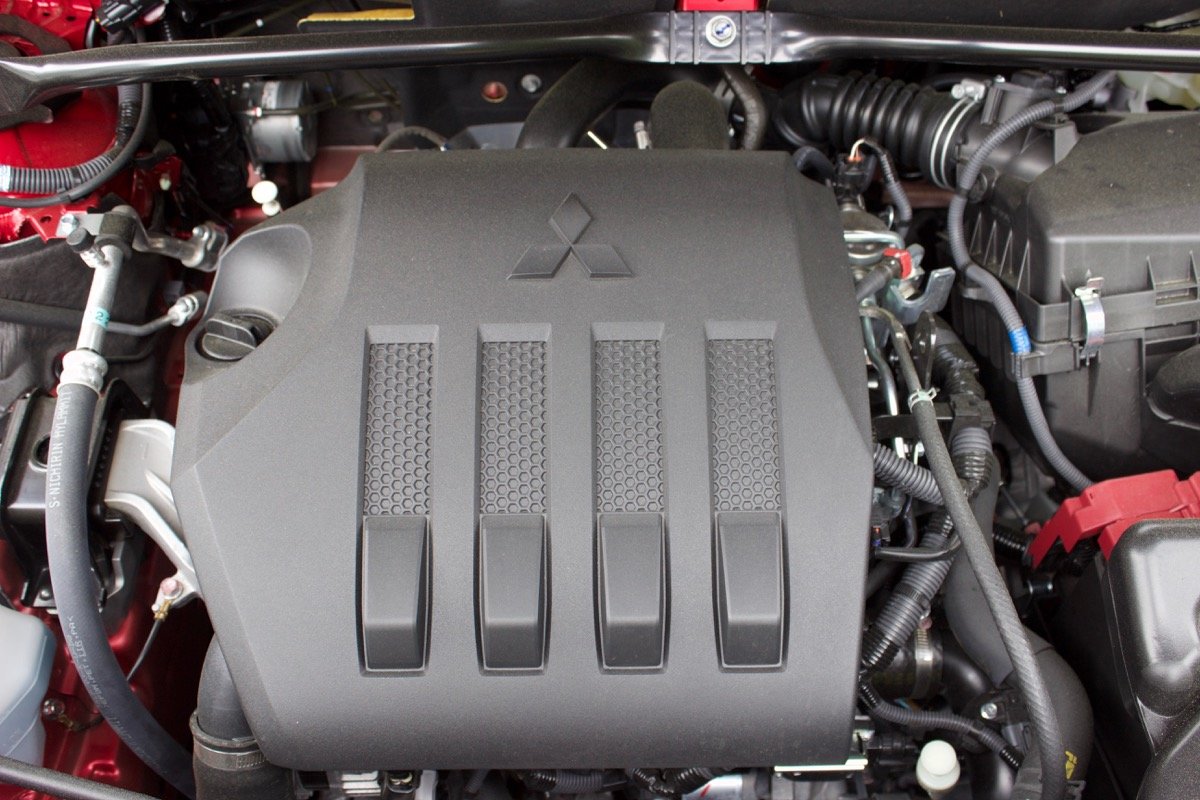 The Eclipse Cross comes standard with a turbocharged 1.5-liter 4-cylinder engine making 152 horsepower and 182 pound-feet of torque. It's a true bright spot in this vehicle. Power is routed through a continuously variable transmission, or CVT, which performs well in most driving situations.

Generally, acceleration is decent. If you want a sportier feel, there is manual mode and steering-wheel-mounted paddle shifters (on the SEL trim). The thing is, a manual mode for a CVT is just silly. It would make more sense to offer a sport-shift mode, which leaves the CVT in control but applies more aggressive gear ratios.

Power is routed to the front wheels or available Super All-Wheel-Control, or S-AWC (Mitsubishi’s name for all-wheel drive). Front-wheel drive comes on only the base trim, although that trim is available with S-AWC, too. For all other trims, S-AWC is standard

S-AWC can be operated via a button on the center console. You can toggle through Auto, Snow, and Gravel drive modes. In all likelihood, you'll leave it in Auto most of the time, but you could use Snow during a winter storm or on your way to ski country. If you have one of these vehicles and are near a dirt road, try Gravel mode. It actually manages power well and the vehicle feels capable over tricky ground.

No matter the mode, steering is well weighted, which is usually a good indicator of handling. Yet, once you turn into a corner, you immediately feel the body roll. It’s still better than its larger sibling, the Mitsubishi Outlander, but that’s not saying much. In reality, it doesn’t measure up against supposed rivals like the Ford Escape and Mazda CX-5, but would be fine for commuting and city driving.

The ES trim with front-wheel drive returns fuel economy of 26 mpg city, 29 highway, and 27 combined. The SEL S-AWC model I drove posts fuel economy numbers of 25 city, 26 highway, 25 combined. Real-world driving is a bit different, and in my week of mixed city and highway driving, I found fuel economy of 18.2 mpg. 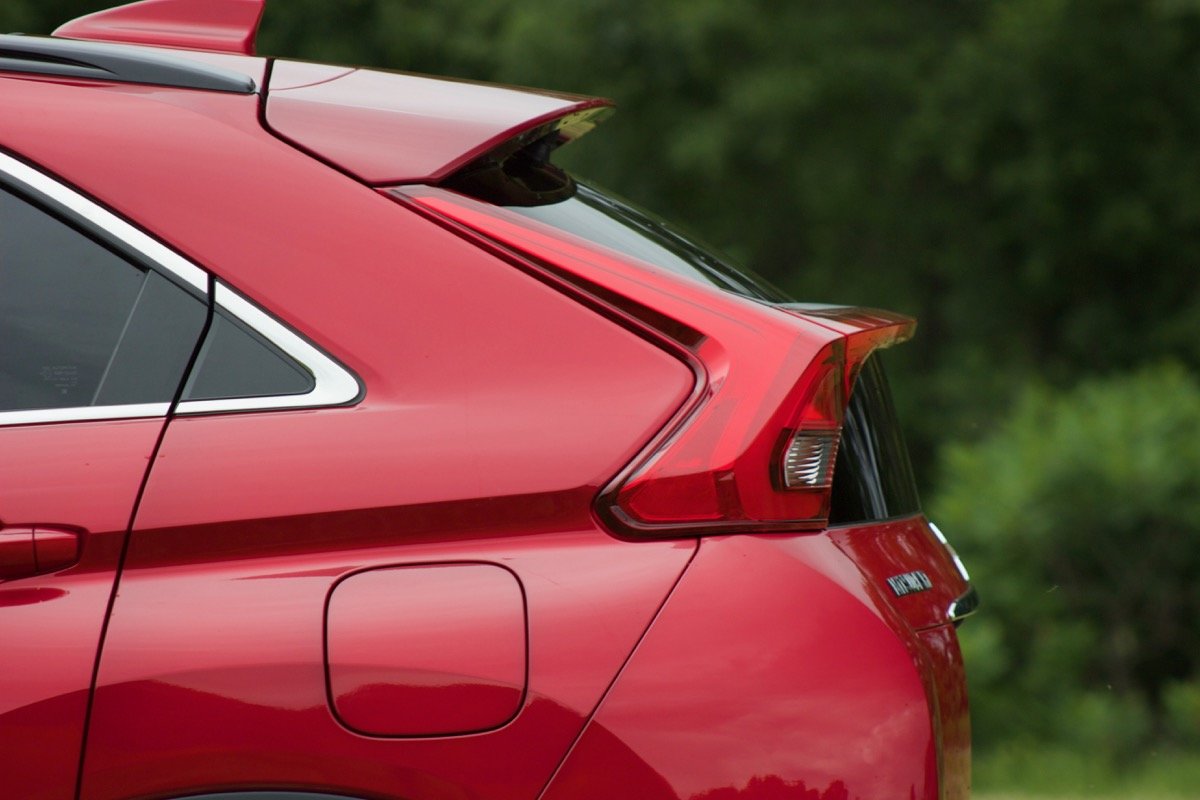 The Eclipse Cross has plenty of front-seat headroom and legroom, and the seats themselves are actually quite comfortable. Unfortunately, the power seats don't lower far enough, making it difficult to find the proper seating position. It also has an unintended consequence.

Taller drivers can’t see the HUD. The projector only moves enough for shorter drivers to see. For taller drivers, the image doesn't have enough range to move into their line-of-sight.

The storage tray at the base of the center stack looks large, corralled by the two big silver borders. But Mitsubishi crammed too many controls into the center console. The cupholders, shifter, heated-seat controls, and S-AWC button pack everything into that area, cutting in on that tray space. Luckily the Eclipse Cross has large door bins and a large center-console bin for your stuff.

Rear seat space is decent and feels about average for the class. There’s a solid amount of legroom, though rear headroom is somewhat limited. The rear seats also tilt and recline, making the seating situation back there more comfortable (and opening up a bit of headroom).

With the rear seats in place, the Eclipse Cross has 22.6 cubic feet of cargo space, which is about average for the class. But fold that rear seat and it has just 48.9 cubic feet, which is well below the competition. That funky rear hatch design really cuts into rear cargo space, and a less fastback profile would yield more usable space. 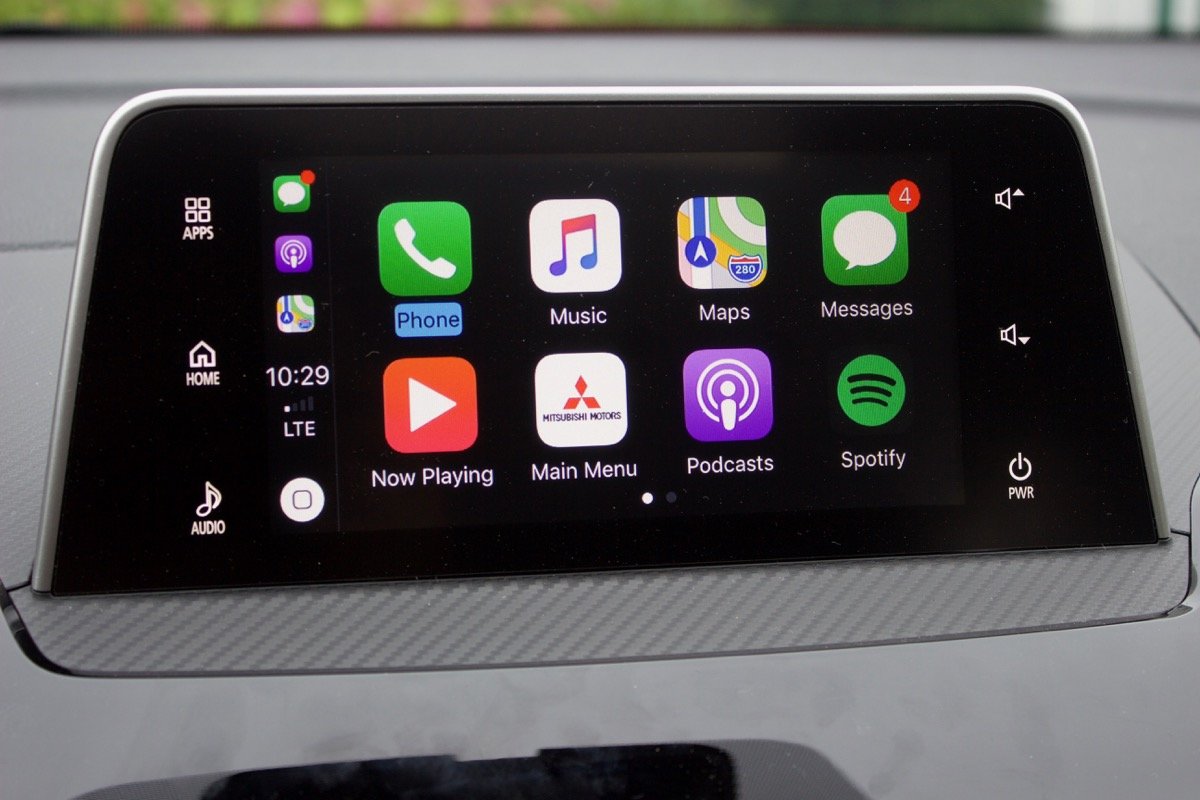 Mitsubishi's infotainment situation is a weird one. The brand is at different points replacing and updating vehicles. The Eclipse Cross has the new infotainment system, which is different from the one in the Outlander. It’s not groundbreaking in any way; it offers a simple menu layout, and you have the option of using either the touch screen or a track pad that lets you scroll through items without reaching up.

The track pad itself looks like a riff on the Lexus Enform system, but with Enform, you have to use the track pad instead of the touch screen. One would think the fact it has redundant controls (track pad and touch screen) would make it easy to use, but the Mitsubishi system has some major flaws.

For one, there are no volume or tuning knobs. That is a colossally bad design for something you use every day.

The cautionary tale here is Honda. Several years ago, Honda did away with the volume knob in the Civic, and it was rightfully roasted for doing so. Flash forward, and Honda has come around with its vehicles, many of which now feature volume and tuning knobs again.

Maybe you can forgive the lack of a tuning dial—after about a week of car ownership, you'll have all of your presets set up, anyway. But the lack of a volume knob is just bad, and there was plenty of warning from other automakers to avoid such a choice. Add the volume buttons' placement on the right-hand side of the screen, farther from your reach, and you have one awful system to use day-to-day.

That said, while the Eclipse Cross lacks a true volume knob, and the touch-sensitive buttons are on the incorrect side of the screen, Mitsubishi does provide gesture shortcuts on the touch control pad in the center console. Two fingers swiping up or down will raise or lower the volume, respectively. Using two fingers to swipe left or right will change the track or station. It doesn't completely make up for the lack of a volume knob, but it is helpful. 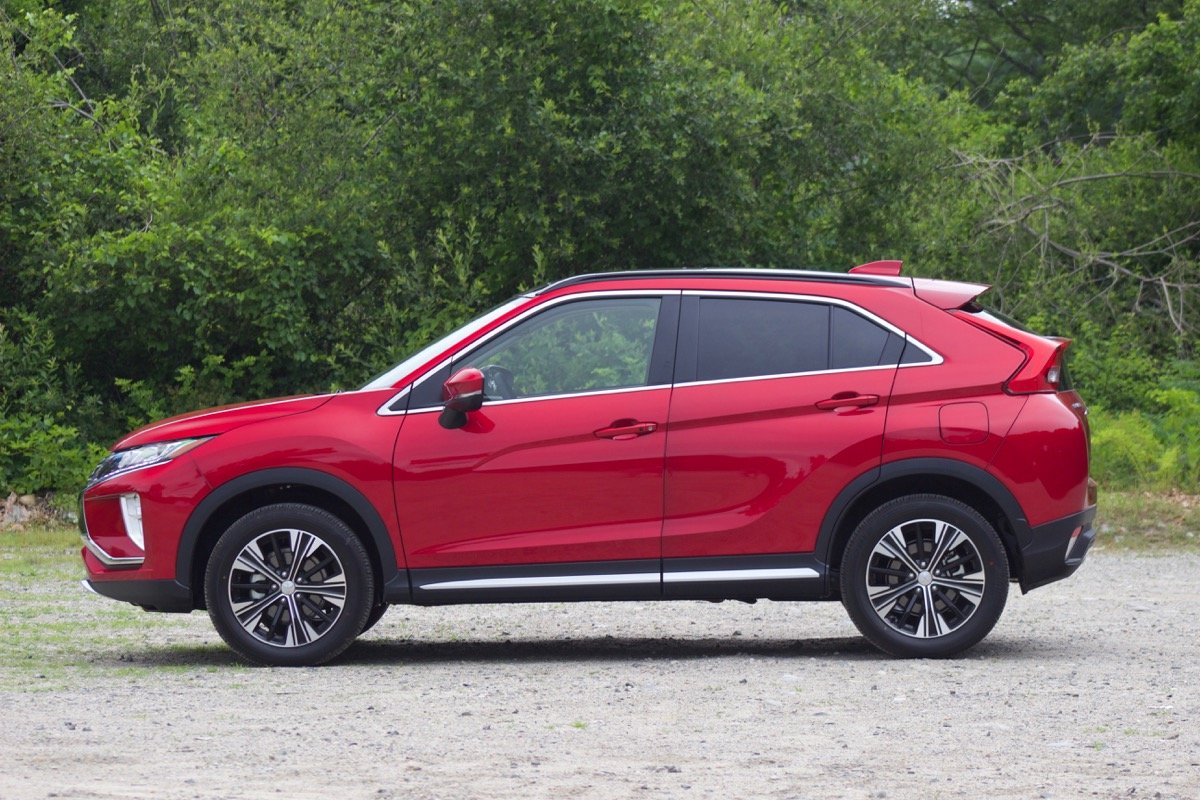 The Eclipse Cross comes standard with a full array of airbags, a reversing camera, hill-start assist, active stability control, and a tire pressure monitoring system. Move up to the SE trim to add blind-spot monitoring with rear cross-traffic alert and lane-change assist.

Something as simple as visibility factors into safety, and the Eclipse Cross is effective from certain angles. The split rear window allows for a wide range of view out the back of the vehicle. But, like many vehicles today, the Eclipse Cross has a sizable C-pillar, creating a rather large blind spot on the right hand side of the vehicle. For its part, the Eclipse Cross does have large side mirrors, but peace of mind likely won’t be achieved without the optional blind-spot monitoring system. 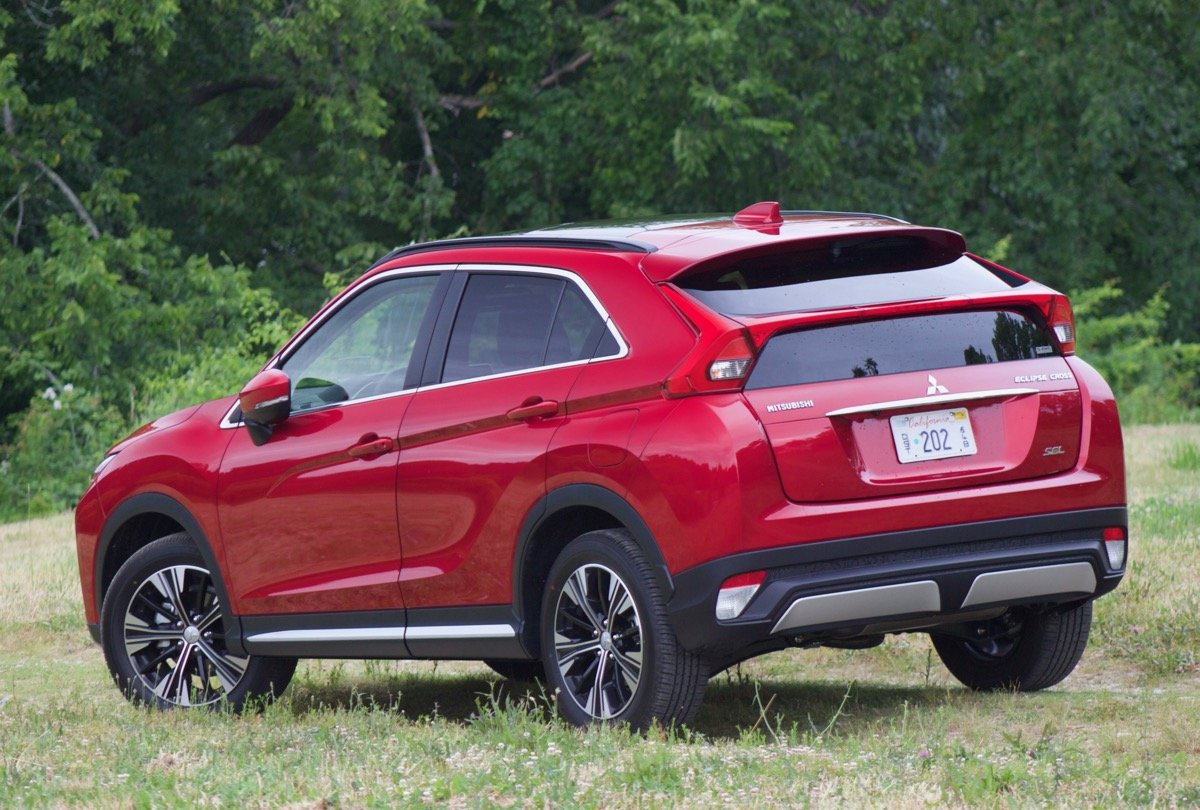 The range-topping SEL starts at $27,895. Our SEL test model came with the optional dual-pane moonroof, heated rear seats, heated steering wheel, driver-assistance features, and a Rockford-Fosgate premium audio system. All told, our test model clocked in at $32,310, which was a lot, considering the Eclipse Cross's shortcomings.

On the plus side, the Eclipse Cross is backed by a 10-year/100,000-mile powertrain warranty, which is rather impressive. Only Hyundai and Kia can match that warranty.

There is serious potential with the Eclipse Cross. Mitsubishi can produce a vehicle with bold styling, provide a functional interior, and decent acceleration. But what might appear to be little things are actually really big things, and the lack of a volume knob perfectly encapsulates the brand’s inability to execute a vehicle that is ready for prime time.

Mitsubishi is almost there, as shown by the presence of Apple CarPlay and driver-assistance tech. But creating a winning car isn’t just checking off boxes. The bigger brands put hundreds, if not thousands of hours into figuring out user interfaces, how the doors “click” close, and how people interact with their vehicles. The Eclipse Cross needs to be better to compete with the rest of the compact SUV segment. The fact that it has “Eclipse” in the name only serves to remind enthusiasts just how far Mitsubishi has to climb to get back to a place of relevance.

What's your take on the 2018 Mitsubishi Eclipse Cross?

GuruCJLGG This review and many more have missed a major flaw with the cross. Which is the lift gate cannot be opened and closed with a remote even in the top of the line model. Something which is a standard these days. I hope Mitsubishi finds a solution and provides it,

Have you driven a 2018 Mitsubishi Eclipse Cross?
Rank This Car