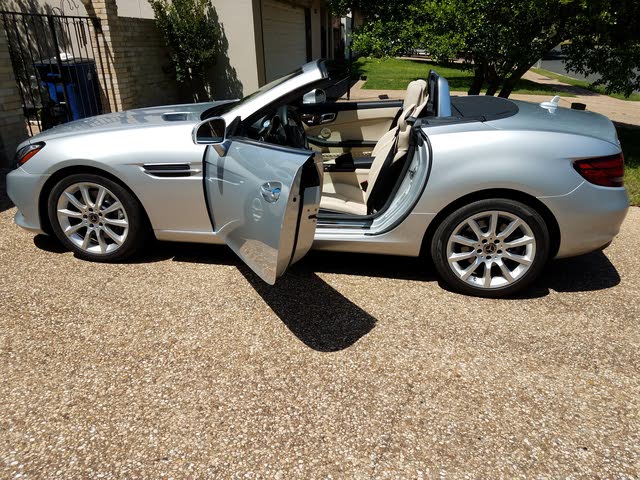 The fascinating life of the Mercedes-Benz SLC-Class began in the late 1990s as the original SLK-Class. This diminutive roadster, which slotted below the stately SL-Class, was distinguished by its trick-folding hardtop and genuine performance characteristics. Throughout its three generations, the SLK-Class has maintained those attributes, and for the 2017 model year, Mercedes-Benz tweaked the model visually, gave it new running gears, and revised its name to the SLC-Class. For 2018, this baby roadster remains fundamentally unchanged.

The general shape of the SLC-Class has remained consistent for the past decade, but everything beyond the windshield was redesigned during the 2017 facelift, which brought the headlamps, grille, and lower front fascia up to Mercedes-Benz’s current school of design. The redesign also altered the rear fascia, adding jeweled LED taillamps and emphasizing horizontal lines. Otherwise, the simply elegant SLC-Class features classic long-hood/short-deck proportions along with a low and wide stance that sets it apart from other modern vehicles.

The SLC-Class has two major models that both employ a 9-speed automatic and rear-wheel drive, and both versions have a number of incredibly attractive features.The base version, the SLC 300, has a 2.0-liter turbocharged inline four-cylinder engine with 241 horsepower and 273 lb-ft of torque. This powerful engine can move the vehicle to 60 MPH in only 5.8 seconds. The SLC 300 features five standard drive modes - “comfort,” “sport,” “sport+,” “eco,” and “individual” - that make the 300 a well-rounded small luxury roadster.

The more advanced model, the SLC 43 AMG, can be distinguished from the 300 by its full-width lower intakes and quad rear exhausts, but it continues the SLC-Class tradition of subtlety. However, despite its sleek look, the SLC 43 AMG comes with a powerful engine upgrade: a 3.0-liter twin-turbocharged V6 delivering 362 horsepower, 384 lb-ft of torque, and a zero-to-sixty time of 4.6-seconds. The 43 AMG also features an upgraded suspension, bigger brakes, and AMG-tuned exhaust that adjusts with the driving mode. The 43 AMG’s stiffer suspension places it on par with competitors like the Porsche 718 Boxster S and V6-powered Jaguar F-Pace, which cost far more than the SLC 43 AMG.

However, the SLC-Class’s interiors aren’t Mercedes-Benz’s latest wares. Both models have new steering wheels and instrument clusters, but the switchgear looks and feels dated. The infotainment system also appears small and insignificant, and push-button start is not standard, which is puzzling at this price point. The standard carbon-look aluminum trim is a bit garish for this class of car, but the optional wood trim upgrades appear deep and rich. Similar models from Porsche and Audi employ cold, mechanical philosophies for their interiors, making them difficult to compare with the SLC-Class. Jaguar, however, similarly prioritizes classic luxury and achieves them to a greater effect.

Despite these drawbacks, the SLC-Class gets the basic design right, and has the unique distinction of being one of the few cars still available with a wide array of interior colors, ranging from sand white to wine red and even saddle brown. The SLC-Class also has AIRSCARF, which is composed of vents at neck-level in the seats that blow warm air on the occupants’ upper bodies even with the hardtop folded down. The hardtop can also fold and unfold at speeds of up to 25 miles per hour, and most importantly, every part of the interior still feels substantial and high-quality.

The Insurance Institute for Highway Safety (IIHS) has yet to test the SLC-Class. However, both models come with the full suite of basic safety precautions. There are driver and passenger frontal, side-seat, side-curtain, and knee airbags as well as a seat sensor for the front passenger seat that deactivates relevant airbags if a child seat is present. The SLC-Class even has a camera that provides an audible and visual warning if it detects that the driver is unfocused. With these systems and its wide array of optional safety aids, the SLC-Class should fare well in any future collision or collision-avoidance tests.

As the fundamentally oldest car in its segment, the SLC-Class has lost some of its luster, and even the recent facelift hasn’t completely addressed particular issues. However, the SLC-Class is more balanced and livable than its competitors. The interior is all-day comfortable, aided in part by the folding hardtop. With either powertrain, the SLC-Class still knows how to have fun while being practical for everyday driving. Those factors, coupled with its handsome proportions, mean the SLC-Class continues to be a solid choice among luxury convertibles.

What's your take on the 2018 Mercedes-Benz SLC-Class?

Have you driven a 2018 Mercedes-Benz SLC-Class?
Rank This Car

Who Advertises On Cargurus

What is the biggest and luxury mercedes benz out now