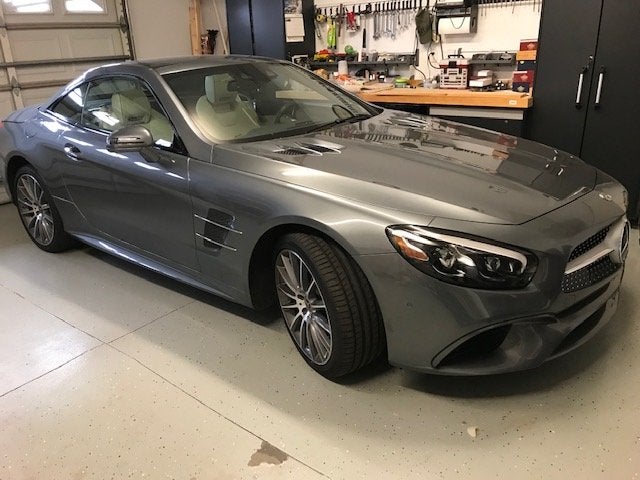 The Mercedes-Benz SL line of two-seaters has been a top choice among older well-heeled motorists who want something that mixes equal parts two-seat sports car and supple luxury cruiser. That still describes the current model, and for 2018 things mostly continue unchanged, although a reversing camera has been added as standard equipment across the lineup. It’s still handsome but not flashy, quick but not scary-fast, and luxurious but not cutting edge. It can be had in V-6, V-8 or even V-12 configurations.

The SL seats only two, but those occupants ride in comfort and style. Leather seats are standard, and there are soft hides across the dash as well. The seats are power adjustable and have a massage feature, and other standard features include Harman Kardon stereo, and a 7.0-inch infotainment screen with controller. A Bang & Olufsen stereo is optional. Wet-arm wiper blades, LED daytime running lights, and active headlights all come standard.

The convertible top is power operated and can retract in about 30 seconds, but folds into the already modest trunk to reduce space back there from 13.5 cubic feet to just 8.5.

While the SL hasn’t been crash tested, buyers can take some comfort in the fact all models come with ample airbags and there are roll bars behind the seats that pop up in the event of a rollover. An Attention Assist, which monitors driving and suggests drivers pull over when it detects drowsy driving, also comes standard. A reversing camera is now standard even in the base SL450. Adaptive cruise control, blind-spot monitors, active lane control and forward-collision warning are optional extras.

What's your take on the 2018 Mercedes-Benz SL-Class?

Have you driven a 2018 Mercedes-Benz SL-Class?
Rank This Car