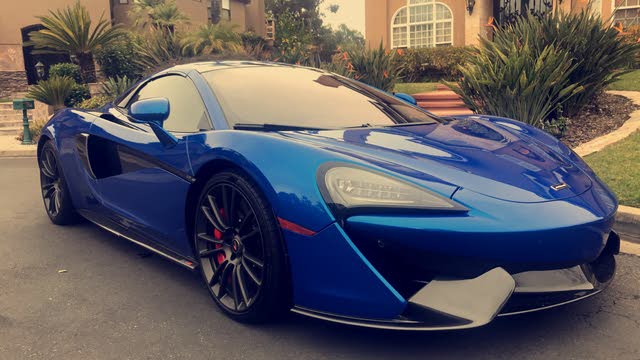 The McLaren 570S is entering 2018—ts third year as the brand’s entry-level product—mostly unchanged. “Entry-level” is a relative term, but with a base-price under $200,000 and fairly ordinary construction, the 570S competes as an everyday upper-level sports car instead of an exotic vehicle.

That’s not to say the 570S is ordinary. The fixed-roof Coupé version is covered in dramatic lines and geometric surfaces that culminate in a teardrop shape that blends art and science. The Spider body style keeps most of the same shape, but trades the Coupé’s roof for a hardtop that electrically folds beneath the rear fairings to create open-top fun. There’s 5 cubic feet of storage at the front end, which is notably higher than most similar cars, and it’s enough to swallow one carry-on bag. Like any other serious sports car, the McLaren 570S is a two-seater.

Mounted between the two axles is McLaren’s familiar twin-turbocharged 3.8-liter 8-cylinder engine, this time with 562 horsepower and 443 pound-feet of torque, sending power to just the rear wheels via a 7-speed dual-clutch automatic. That all seems anticlimactic compared to the high-tech super-hybrid magic of McLaren’s flagship range of cars, but it’s all capable hardware. There are active dampers at each corner that can be adjusted on the fly, and, in lieu of a mechanical limited-slip differential, McLaren employs an electronic braking system to keep the wheels in line. All of that plus weight as low as 3,189 lbs culminates in a 0-60 time of 2.9 seconds and a top speed of 204 mph. It manages fuel economy as high as 16 mpg city, 23 highway, and 20 combined—within the realm of far less-capable machines.

The 570S, despite its status within the lineup, gets plenty of standard equipment. Among this is performance tires, carbon ceramic brakes, LED headlights, a 7.0-inch infotainment system, navigation, Wi-Fi tethering, Bluetooth, and four USB ports. Upgradeable options are mostly limited to interior comforts and include things like a Bowers & Wilkins premium audio system, power-adjustable seats, and a power-adjustable steering column. There are some performance improvements available, like the weight-shaving carbon fiber seats and the track telemetry system. And McLaren allows buyers to customize the car to their hearts’ content with several wheel, trim, and high-quality paint choices.

Typical of sports cars, the McLaren only has basic safety equipment: airbags and seatbelts. A reversing camera is optional, and no advanced driving aids are offered. Also typical, the 570S does not have public crash testing data available.

The McLaren 570S was an effort to create a sports car that’s equally at home on the track as it is on the road, and it’s a resounding success. It’s faster than the overwhelming majority of vehicles on the road while showing up much of its competition as far as what it means to be a daily-driver.