Mazda takes its peppy little CUV and improves its handling, adds standard safety features and upgrades the cabin for 2018. 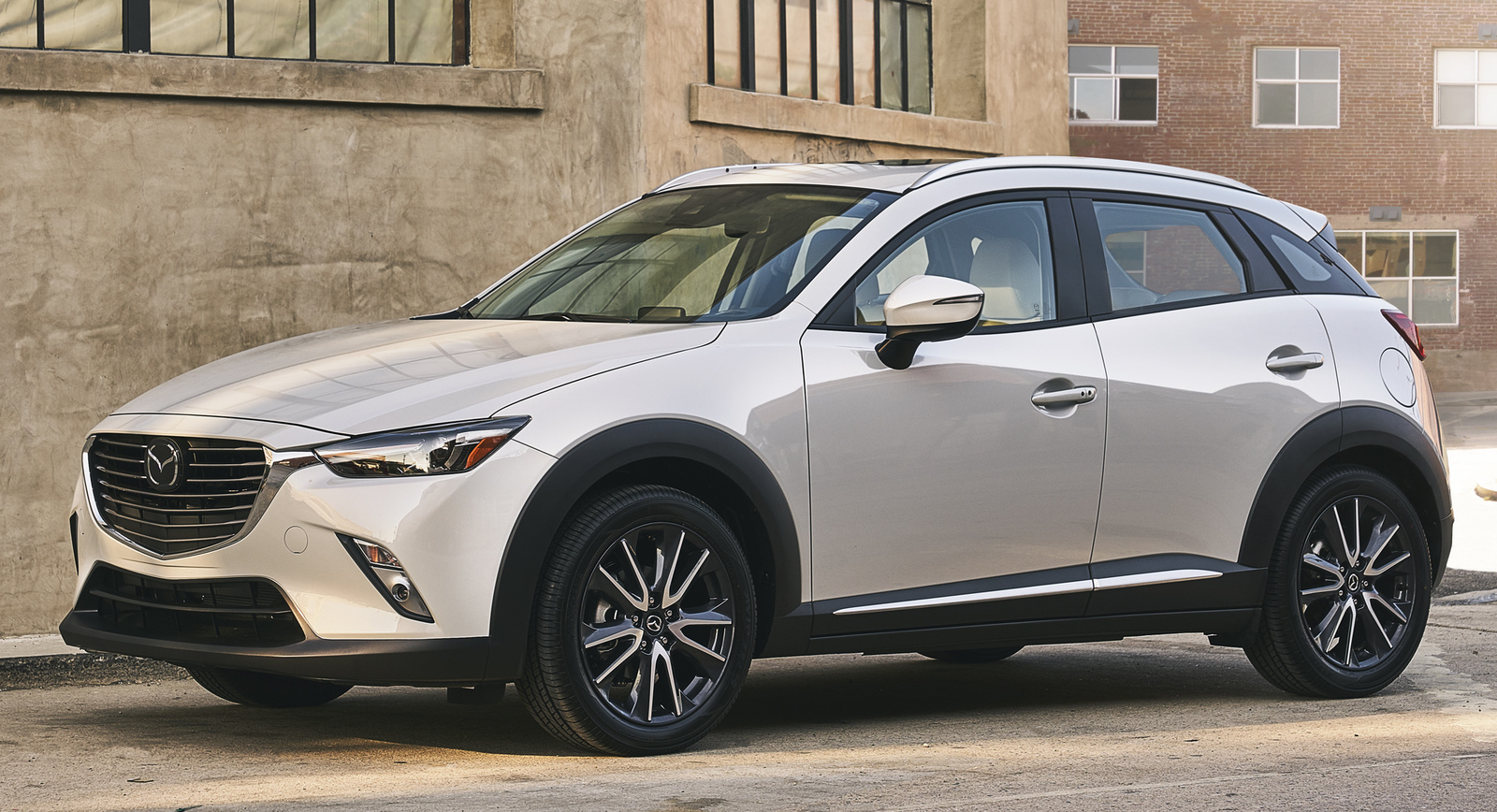 With the CX-5 proving Mazda can compete among crossovers, it was inevitable the Japanese manufacturer would toss its hat into the compact crossover ring. The CX-3 proved the successes Mazda found with its bigger brother were no fluke, and the CX-3 brought home awards for safety, design and quality alike. Three years later Mazda has decided not to rest on its laurels by redesigning the CX-3’s suspension, adding low-speed emergency braking as standard, and applying thicker seals, glass, insulation and sound deadening so the cabin is a more comfortable place to live. 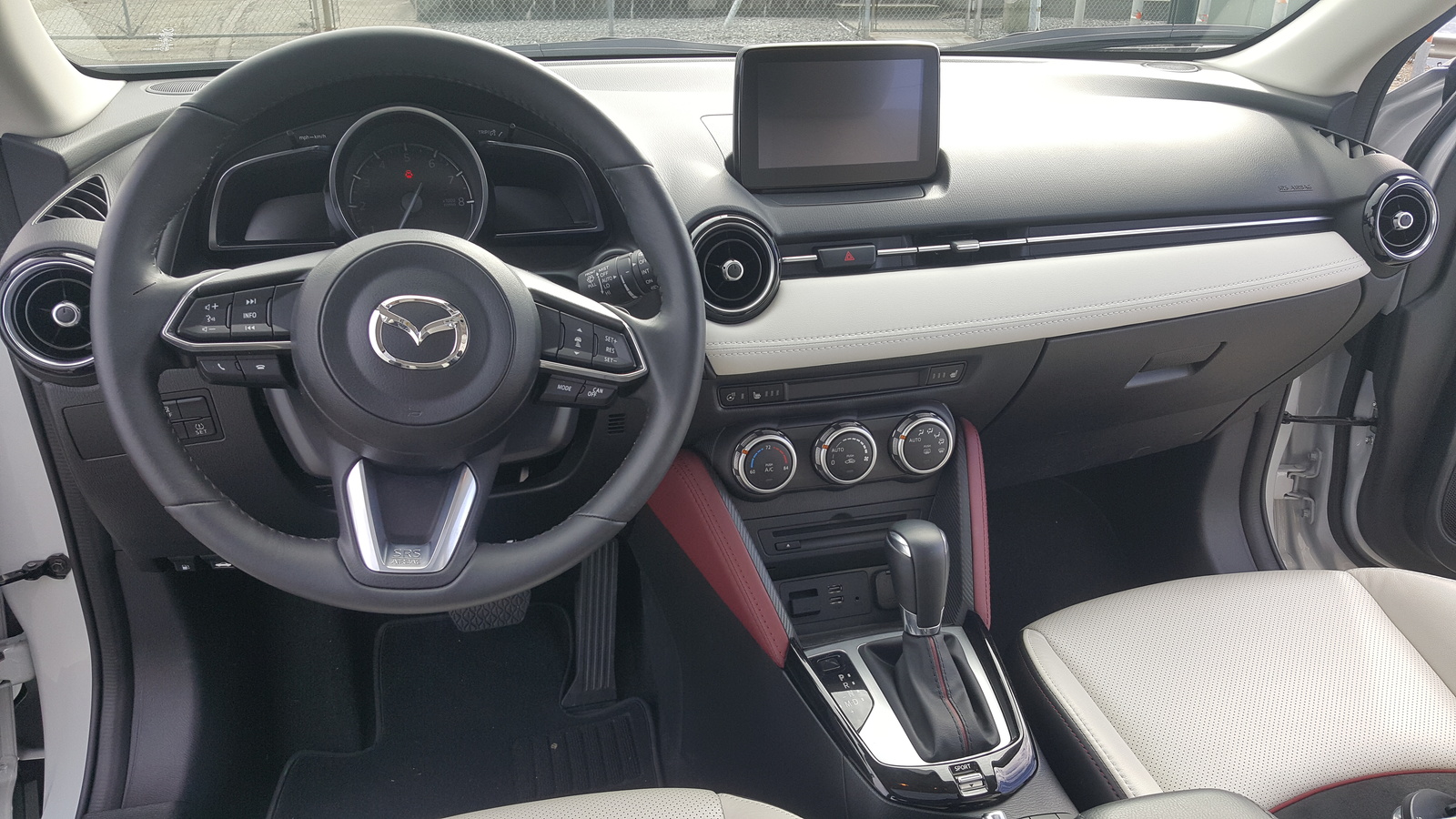 Mazda's little CX-3 compact crossover improves across the board for 2018 with newly standard low-speed emergency braking, a whole host of added insulation and sound-deadening efforts, and a completely redesigned suspension with some handling wizardry to make the base Sport trim’s MSRP of $20,110 an even better deal. At this level you’ll get 16-inch alloy wheels, push-button start, a 7-inch touchscreen with a reversing camera and app integration through Mazda Connect, cruise control, Bluetooth, air conditioning and a 6-speaker stereo with CD player, and any CX-3 can be upgraded to AWD for $1,250.

That’s an impressive value for the price, but moving up to the $22,195 Touring trim means you’ll get larger, 18-inch alloys, auto headlights and wipers, heated seats, a leather-wrapped steering wheel, auto climate controls, heated mirrors, proximity entry and some added safety in the form of blind-spot monitoring with rear cross-traffic alerts. For the 2 grand entrance fee above the Sport's price, the Touring trim is a show I predict a lot of consumers will pay for. A sunroof and Bose stereo with HD Radio and Sirius can be added here through the $1,410 Preferred Equipment Package, and I’d say it’s worth the extra cash.

At $25,165, it’s nearly another 3 thousand dollars to jump up to the Grand Touring trim, though that comes with the sunroof and stereo upgrade, so really you’re adding only $1,560 to the price to get full exterior LEDs, leather-trimmed seats with Alcantara inserts, a head-up display, paddle shifters and navigation. A $1,435 Premium Package will further add an upgraded forward-collision warning and auto-braking feature, adaptive cruise, lane-departure warning, auto high beams, driver's memory settings for the 6-way power driver’s seat, a heated steering wheel, and a traffic-sign recognition system for the head-up display. This is the trim Mazda sent me, further outfitted with a $325 frameless reversing mirror with auto-dim, a $100 rear bumper guard, $300 roof rack and side rails, and $100 door-sill plates. With a $940 delivery fee, the walkaway price was $28,365. 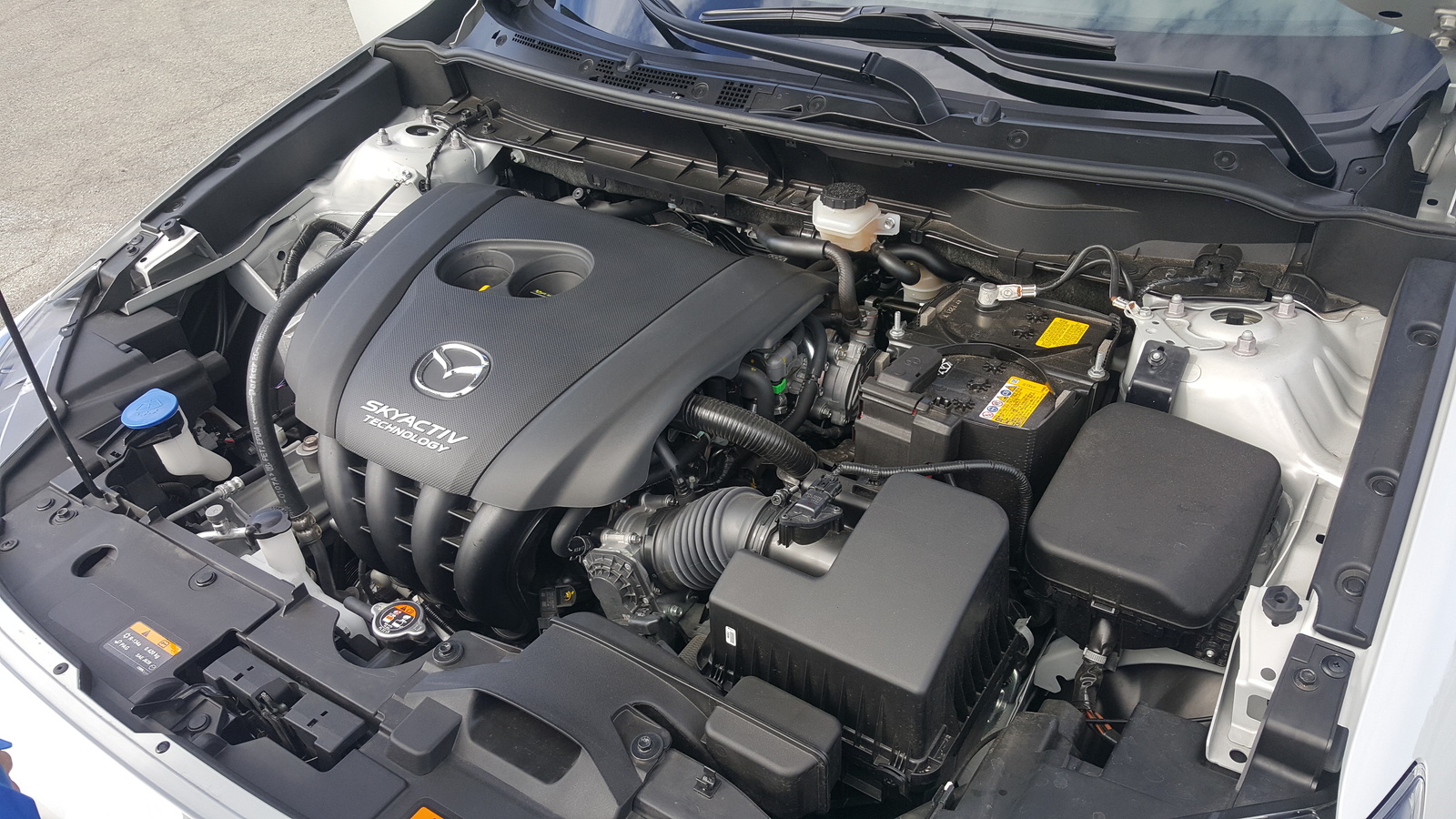 Every CX-3 is powered by the same 2.0-liter, 4-cylinder, DOHC engine, mated to a 6-speed automatic transmission. Its 146 hp and 146 lb-ft of torque won’t win you any races, unless you’re coming up against other compact crossovers, as the CX-3’s 8.5-second 0-60 time is one of the quickest in the class. Power is ample and comes on strong without having to wait for the revs to build to atmospheric heights before anything happens. Because of this, the engine comes very close to delivering its advertised 31 mpg combined rating. Even with a week of my having fun and pushing it through the many turns and hills of the Bay, I was able to average 28 mpg, just 1 shy of its estimated 29 mpg city. On the highway it’s even better, as I beat its 34-mpg highway rating on several trips.

The transmission does its job with quiet aplomb, despite it being viewed as increasingly antiquated in a world where dual clutches and double-digit gears are fast becoming the norm. My one caveat here is that the engine doesn’t sound great. It's not as bad as some 4-cylinder offerings that feel like they’re shaking themselves apart at higher revs, but it’s no symphony either. This would benefit from some intake tuning.

The real performance upgrades this year are in handling, however. New bushings, dampers, engine mounts and front lower control arms are exactly the type of improvement I love to see, and all benefit from a new technological innovation for the CX-3: G-Vectoring Control. This will eventually make its way into every Mazda, having debuted last year in the Mazda3 and Mazda6, but 2018 sees it in the little CX-3. With G-Vectoring Control, the engine retards its own timing very slightly every time you turn the wheel in an attempt to shift the inertial weight of the vehicle forward, pushing the front tires down into the ground to get you more traction. The engine slowing is imperceptible even to professionals, but the practical difference is measurable—as demonstrated in instrumented tests. It’s an innovative answer to improved handling that won’t get as much attention as it deserves for the simple reason that it operates so invisibly. Regardless, Mazda deserves praise. 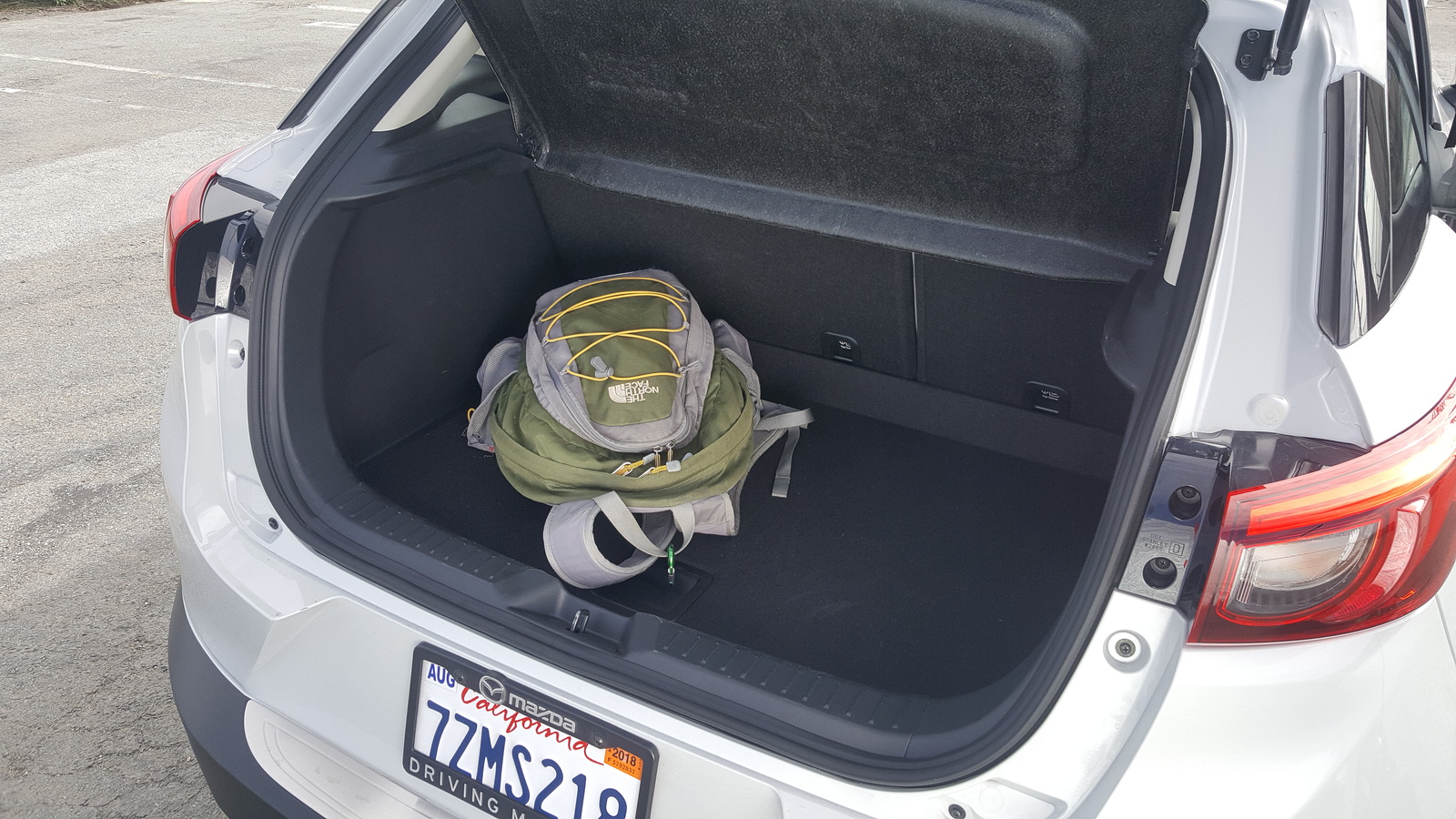 As impressed as I was with the performance upgrades here, the efforts on Mazda’s part to improve the cabin experience are equally notable. Here the CX-3 sees more foam insulation in the B-pillars, thicker seals in the C and D pillars, plus thicker glass and more sound-deadening material in the floor and tunnel to reduce overall noise, harshness and vibration from above and below, inside and out. Constant refinement is a great way to produce a wonderful product, and that’s exactly the approach Mazda has taken here.

As the CX-3 is the best-handling offering in the segment, the ride can get slightly stiff compared to more comfortable alternatives. It’s never harsh, but there’s enough of a difference that if comfort is your primary concern, you owe it to yourself to test something else as well. Otherwise, you won’t find a better-handling option out there.

Likewise, if space is highest on your priority list, the CX-3 is not your best best. The CX-3's 12.4 cubic feet of trunk space and 44.5 with the rear seats flat puts it right in the middle of the pack, with competitors like the HR-V offering 24.3 cubic feet in the trunk and 58.8 total as a point of comparison. That’s a major difference and enough to change minds quickly if you plan to do a lot of hauling in your compact crossover. 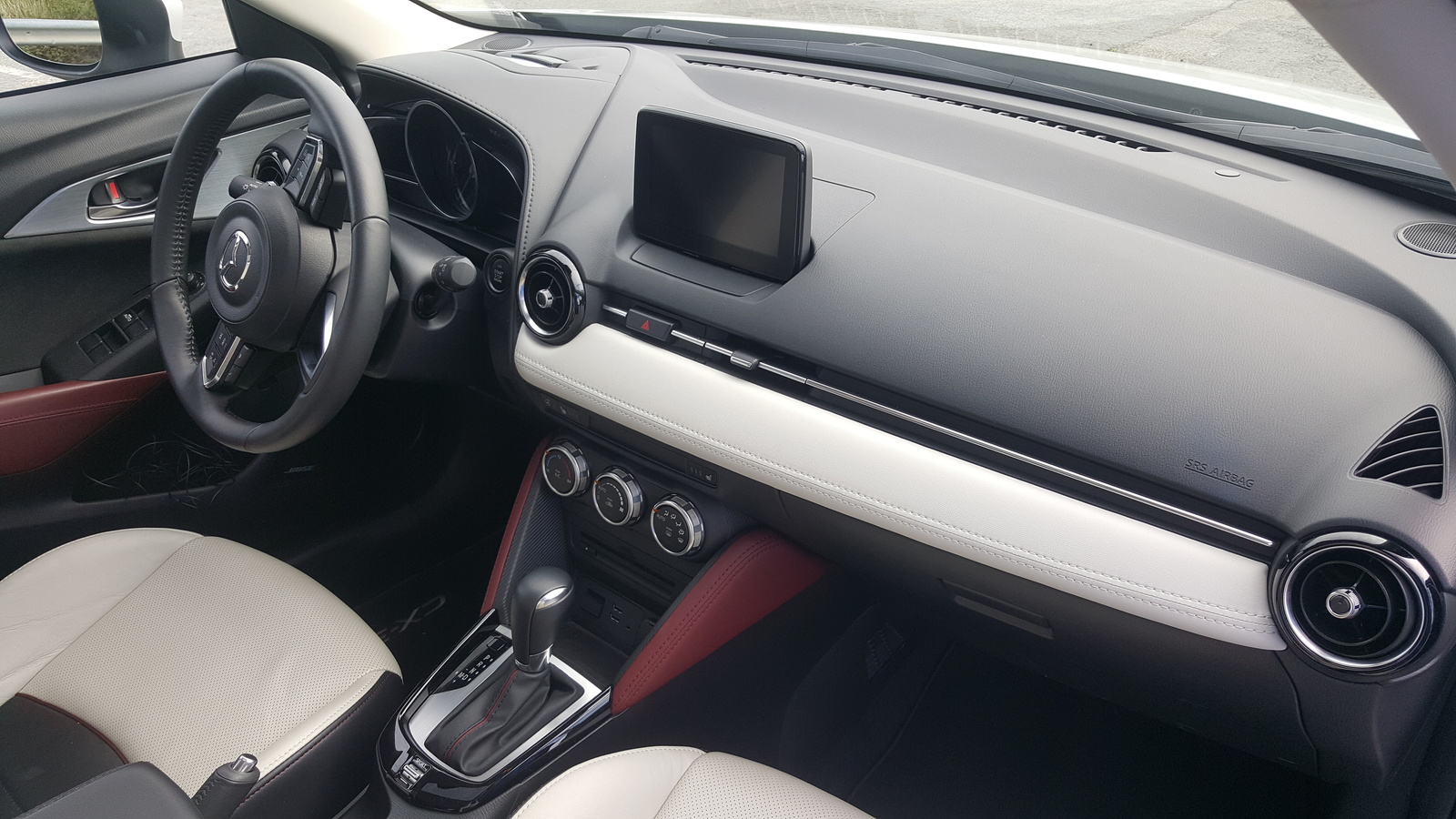 Extra standard safety in the form of the low-speed emergency braking system and upgraded handling via G-Vectoring Control means the CX-3 gets extra points in the technology category this year. The rotary-controlled infotainment system remains contentious and can be a chore to learn at first, but it remains a better choice than some of the worst offerings out there, like Lexus’ Remote-Touch Interface. However, the absence of Android Auto and Apple CarPlay works against the CX-3 here, especially with its intended demographic.

The head-up display is another controversial inclusion here, rising from the dash with a flip-up piece of composite that some have described as looking like an afterthought. I’ll admit, I had the same feeling when I first saw it, but the system quickly won me over, especially with the Grand Touring’s traffic-sign recognition. This system uses the forward-facing camera to identify traffic signs such as speed limits, Stop signs and the like, and then gives you a corresponding graphic in the head-up display. The system even utilizes the navigation to record and learn as you drive, and I can report that it definitely gets better the longer you drive it. It’s a fun effort that puts my speed, the next navigational direction and traffic-sign info on a screen a driver can see without taking eyes off the road. 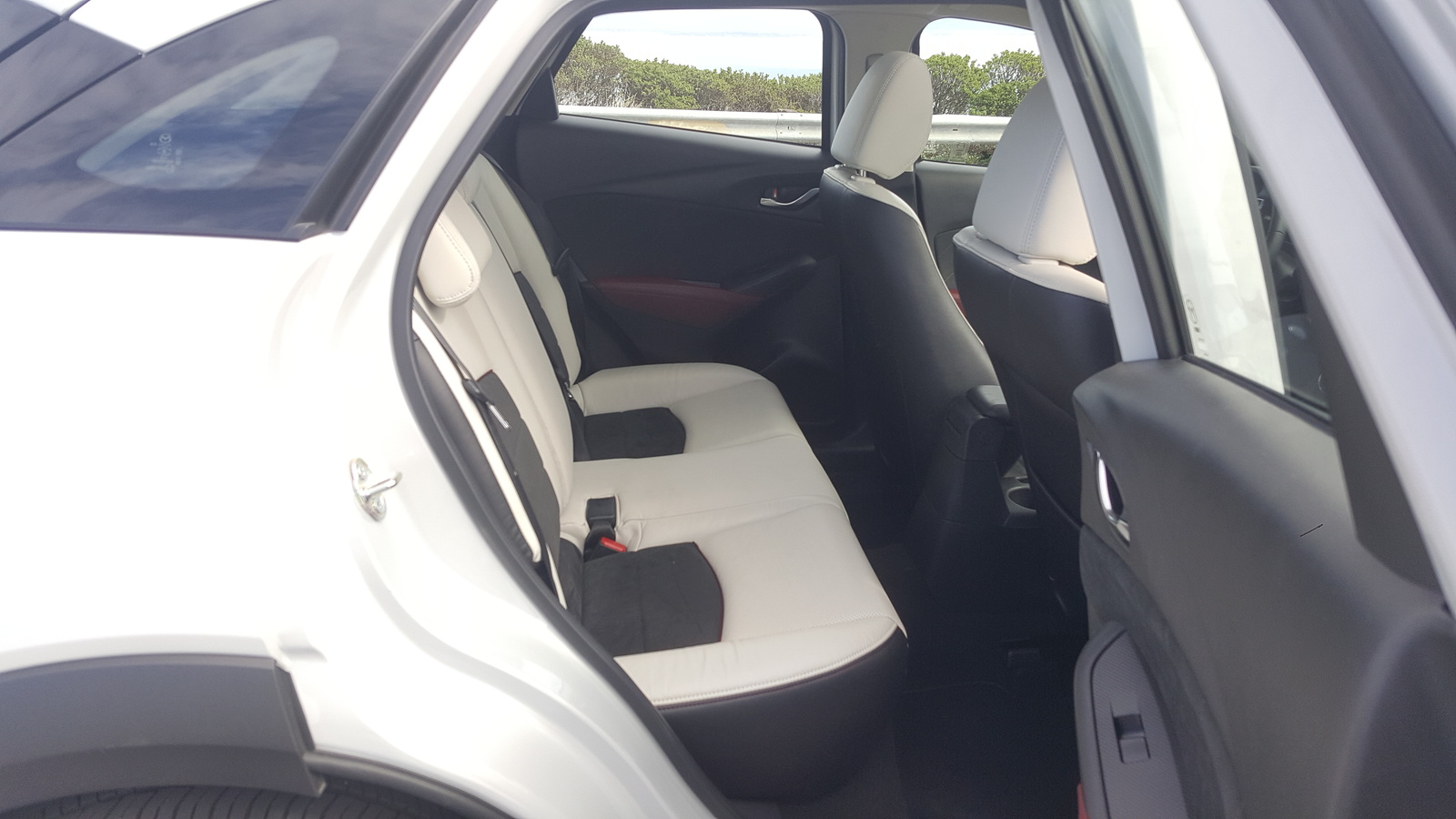 With added standard safety features this year, the CX-3 builds on an already impressive record that has it listed as a Top Safety Pick+ from the independent Insurance Institute for Highway Safety (IIHS), plus a 5-star safety rating from the government’s National Highway Traffic Safety Administration (NHTSA). Additionally, its 117-foot braking distance is competitive for the segment and would only improve with some stickier rubber. 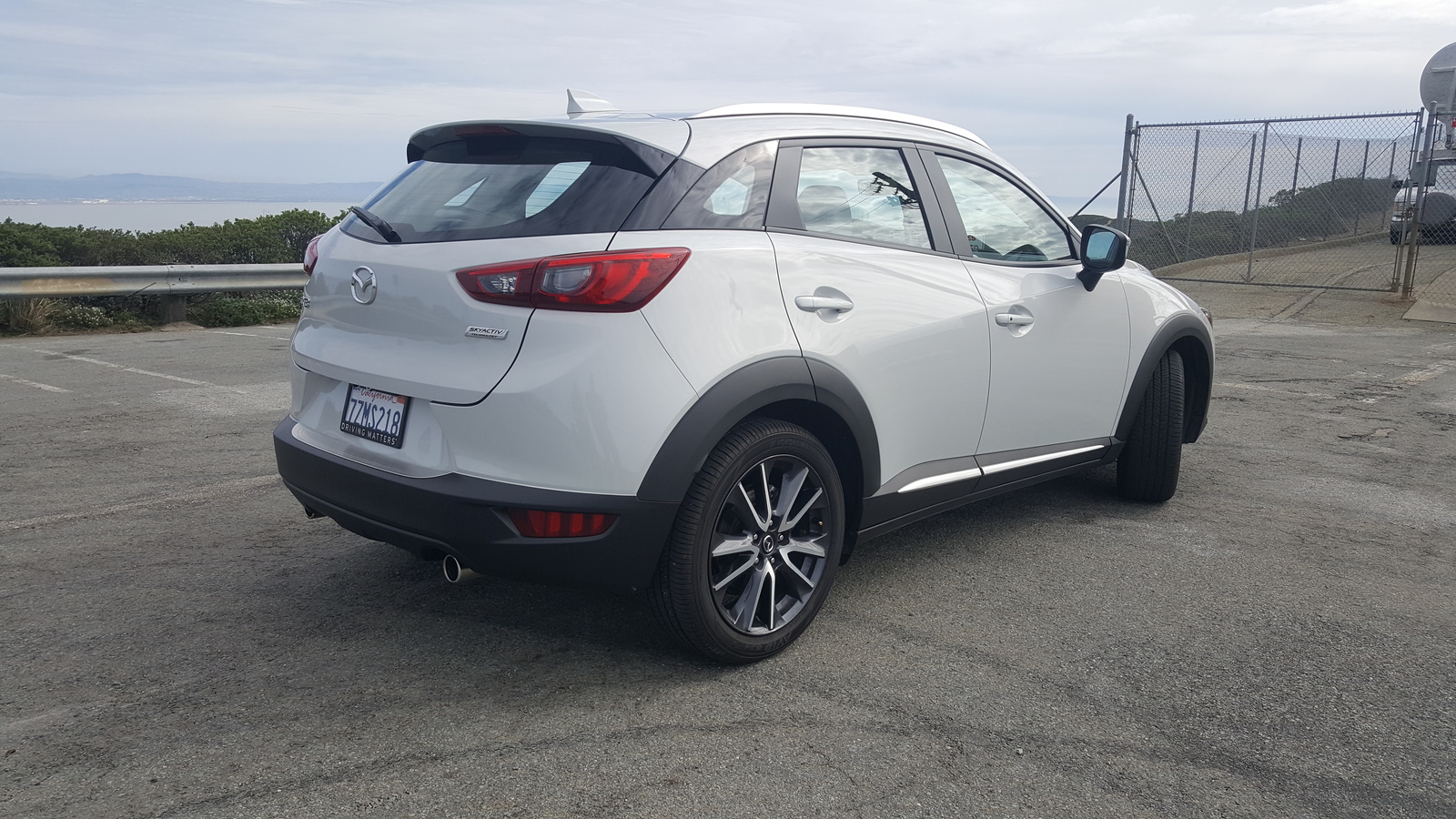 The CX-3 represents a great value for the best-looking, best-handling option in the segment. The pricing structure is one of the better organized in the industry as well, avoiding the nonsense that ostensibly relegates the lower trims to “only if I have to” territory. Here there’s no arguing the value you’re getting with the Sport or Touring trims, and if the Premium Package was available at any level, I’d have no complaints at all. As is, the Touring trim with the Preferred Equipment Package is a great place to find yourself, and if you need to have all the latest safety, the Grand Touring with the Premium Package is a great way to spend 28 grand.

emmawilliam If it's hard for you to find Project Management comparison sites, then maybe I can help.

Users ranked 2018 Mazda CX-3 against other cars which they drove/owned. Each ranking was based on 9 categories. Here is the summary of top rankings.

Is the monthly payment good on the mazda 3

Does the standard model come with the roll out back cover? There are pegs in our car (mileage 4K) but no cover.