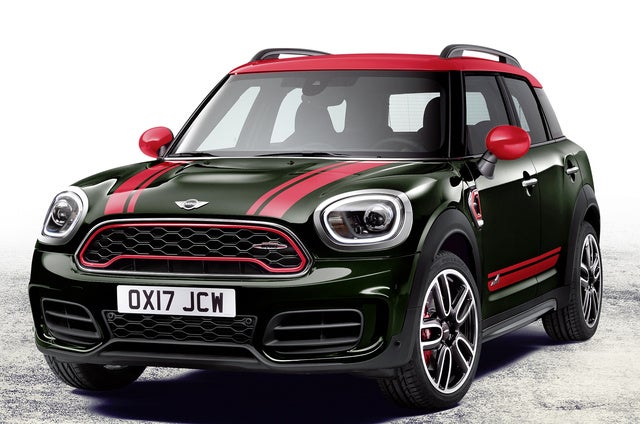 In Countryman form, the MINI is definitely not so miniature anymore, and that's especially true for the second generation model introduced for 2017. Built on the same platform as the BMW X1 compact crossover, it's larger than the old Countryman in almost every respect, although it retains many of its styling cues. For 2018, the biggest news by far are the addition of two new trims—the plug-in hybrid Cooper S E and the John Cooper Works (JCW), meaning that all MINI models are now offered in the high-performance JCW trim.

The 2018 JCW Countryman’s exterior displays JCW badges, larger air inlets in the front fascia instead of fog lights, red accent paint around the grille, roof rails, and a unique spoiler. A new trim-specific JCW Rebel Green exterior paint with Chili Red accents is available, along with the almost dizzying array of paint, wheel, and body-kit choices typical across the MINI range. The Cooper S E trim’s appearance is less distinctive, but it does receive unique exterior badging in addition to the expected color and wheel options.

The JCW Countryman trim is equipped with a twin-turbocharged 2.0-liter 4-cylinder engine good for 228 hp and 258 lb-ft of torque. Power is sent to all 4 wheels via the standard ALL4 all-wheel-drive (AWD) system, and buyers can select either a proper 6-speed manual transmission or an 8-speed Steptronic automatic with paddles, a shift lever, and launch control. The JCW Countryman will reportedly reach 60 mph in 6.2 seconds and hit a top speed of 145 mph, which is actually just a hair slower than regular JCW hardtop.

The Countryman has been praised for its poised ride and crisp handling—especially considering that it rides on a crossover SUV platform—and the new JCW trim sharpens things up even further. It comes with a revised sport suspension, big Brembo brakes with 4-piston calipers up front, adjustable dampers, an electronic differential lock on the front axle, and 18-inch light alloy wheels. Additionally, drivers can switch between Sport, Mid, and Green driving modes.

In the plug-in hybrid Cooper S E Countryman trim, a twin-turbo 1.5-liter 3-cylinder engine sends internal-combustion power to the front wheels while an electric motor powers the rear wheels for a total output of 221 hp and 284 lb-ft. The gasoline engine gets a 6-speed Steptronic automatic transmission and the motor a 2-stage single-speed transmission, and MINI’s ALL4 AWD system comes standard. The Cooper S E trim boasts an all-electric range of 24 miles and a 0-to-60 time of 6.8 seconds, and it can be charged in just over 3 hours via a 240-volt outlet. For maximum energy efficiency, the driver can select from Auto eDrive, Max eDrive, and Save Battery modes to adjust how much power the car pulls from the electric motor versus the combustion engine.

As with the exterior, it’s easy to get carried away with personalizing the interior of your Countryman with all sorts of trims and color options. At the center of the dash is a standard 6.5-inch Mini Connected infotainment system, which is similar to BMW's iDrive system and can be upgraded to an 8.8-inch touchscreen with navigation. The new JCW trim adds sport seats, a special steering wheel, a unique shifter, and a panoramic sunroof. Special options for the JCW include a Harmon Kardon sound system, a JCW-specific head-up display, Parking Assistant and Active Driving Assistant systems, and a Convenience package with extra power sockets. The latest-generation Countryman's larger size adds extra legroom compared to the old version, and the 40/20/40-split rear seat provides increased versatility even though the cargo area isn't all that cavernous.

All 2018 JCW Countrymans come with a reversing camera and rear parking sensors. Available safety features include adaptive cruise control, a collision-warning system with city braking, pedestrian detection, and a parallel-parking assistant system that can independently park the vehicle on its own.

For those who don't need a premium badge, the MINI Countryman is a great alternative to the BMW X1. Both ride on the same platform, and the MINI is considerably less expensive without feeling at all cheap. It offers the charming, peppy, fun-to-drive character of the rest of the MINI range with some extra practicality. The sporty JCW trim starts out at $37,800, while pricing for the hybrid Cooper S E has not yet been announced—more information should be available after the Shanghai Motor Show later in April.

What's your take on the 2018 MINI Countryman?

maryjanewright I just want to know where can I get an upgrade and replace my I drive system.

Have you driven a 2018 MINI Countryman?
Rank This Car

Any With Issues On 2018clubman

Engine light comes on. Dealer fix is oil and filter change. Has happened twice in last 3 weeks. Manufacturer says it is due to variable winter temp changes in NS and to drive “vigoursly ” more th...

Hoping to get a hold of a price list of options and standard features for 2018 Countryman S and E..I understand production of the 2017's is ending over the next couple of days