Japan’s supreme luxury sedan becomes even more so in its fifth generation. 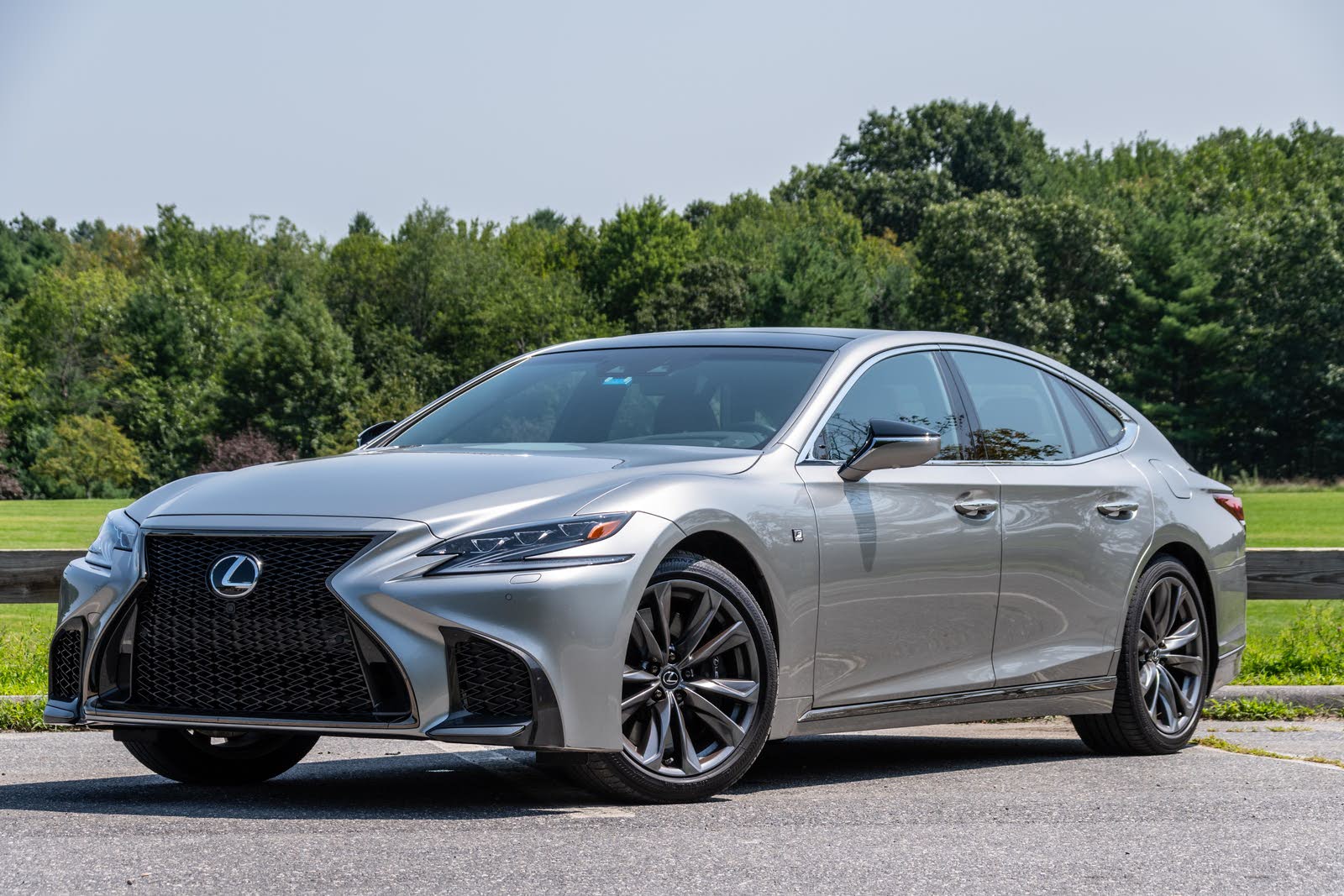 Since its 1989 debut, the Lexus LS has delivered more luxury at less cost than large sedans from Mercedes-Benz and BMW. Toyota created the Lexus brand as a bold upstart built on reliability, value, and customer service. Now an established nameplate and one of the best-selling luxury automakers in the country, Lexus wants to disrupt the big 4-door segment again with dramatic exterior styling and performance. The fifth-generation 2018 LS 500 promises a lot. After piling more than 800 miles on this 17-foot-long cruiser, we say it delivers. 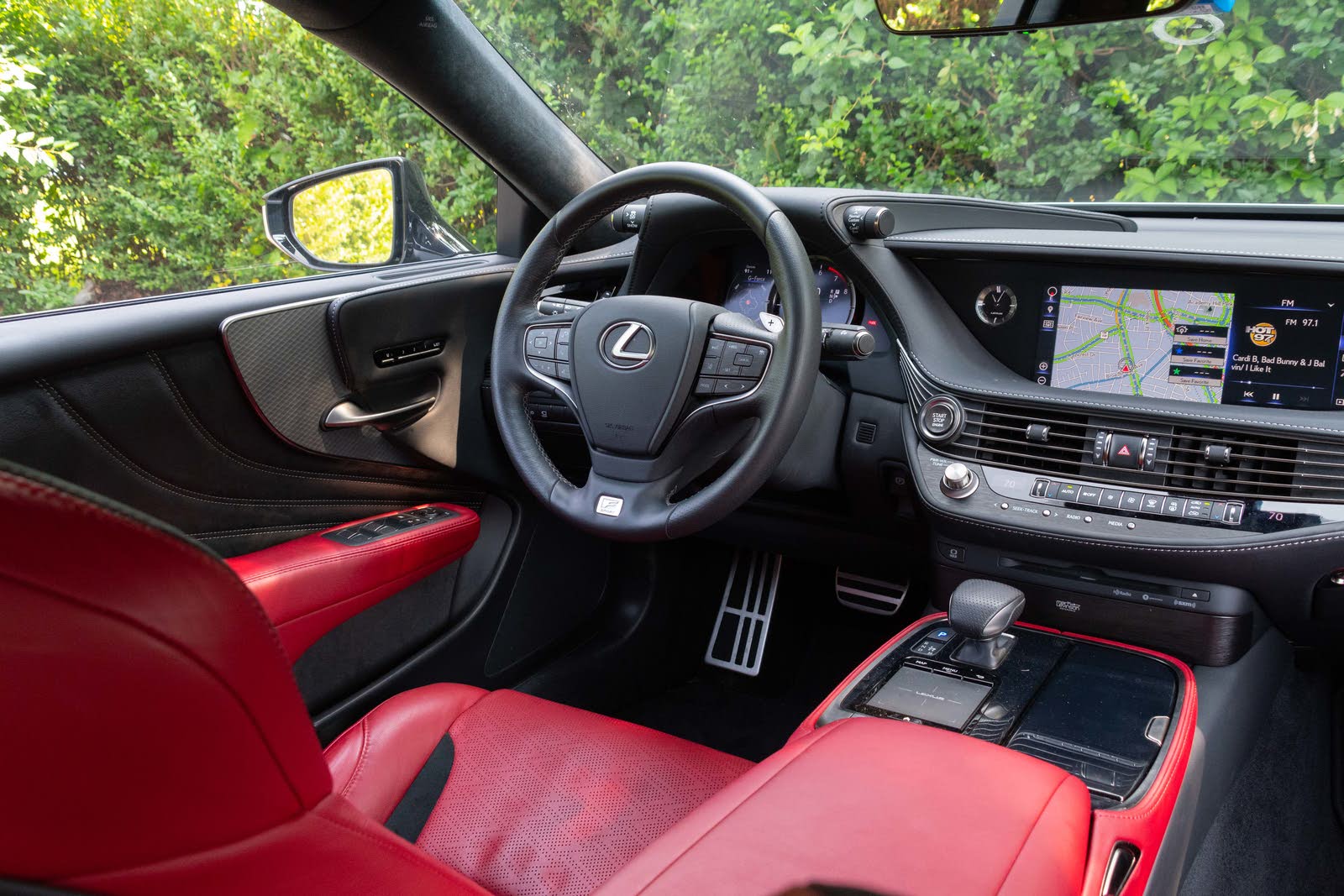 Here’s where Lexus design splits like American politics. The front grille, which Lexus calls a spindle, does not cater to traditional tastes. To some, the wide-mouthed, jagged-edge look resembles a robotic fish or an angry vacuum cleaner. But to others, the deep, textured black hole of triangles surrounded by sharp cuts, creases, and slanted LED headlights is unique and aggressive.

Of course, this style may not prove to be timeless. In fact, it probably won't. But, today, the LS 500 is immediately recognizable (it helps that the entire car is appropriately long and wide, making that enormous front section seem necessary). On our F Sport trim, the gray 20-inch wheels, blacked-out grille, and reshaped air intakes suggest speed, though there’s still plenty of chrome. The arching wheel wells bulge ever so slightly from the body, which employs gentler curves along smooth sides. In the rear, there’s a stout, squared-off trunk lid and a simpler treatment to the taillights and bumper than up front. You could mistake it for the new Toyota Avalon.

You won’t make such a foolish error inside. Our car’s red and black leather interior, combined with microsuede and bright aluminum trim, was decadent at every touch. That’s a given, of course. But the detailing—the layers of trim stacked on top of each other, vertical stitching along the doors, curved thin lines of aluminum, a backlit display of more curved lines above the glovebox, armrests that appear to float—will make your eyes water. In a good way. This trim isn’t the most luxurious, since it’s meant to be a driver’s car. Select a regular LS 500, and you can spec it with laser-cut glass trim, origami fabric hand-woven into the doors, herringbone wood, and other exotic woods and leathers in stunning patterns and colors. There’s no other luxury sedan this wild inside. 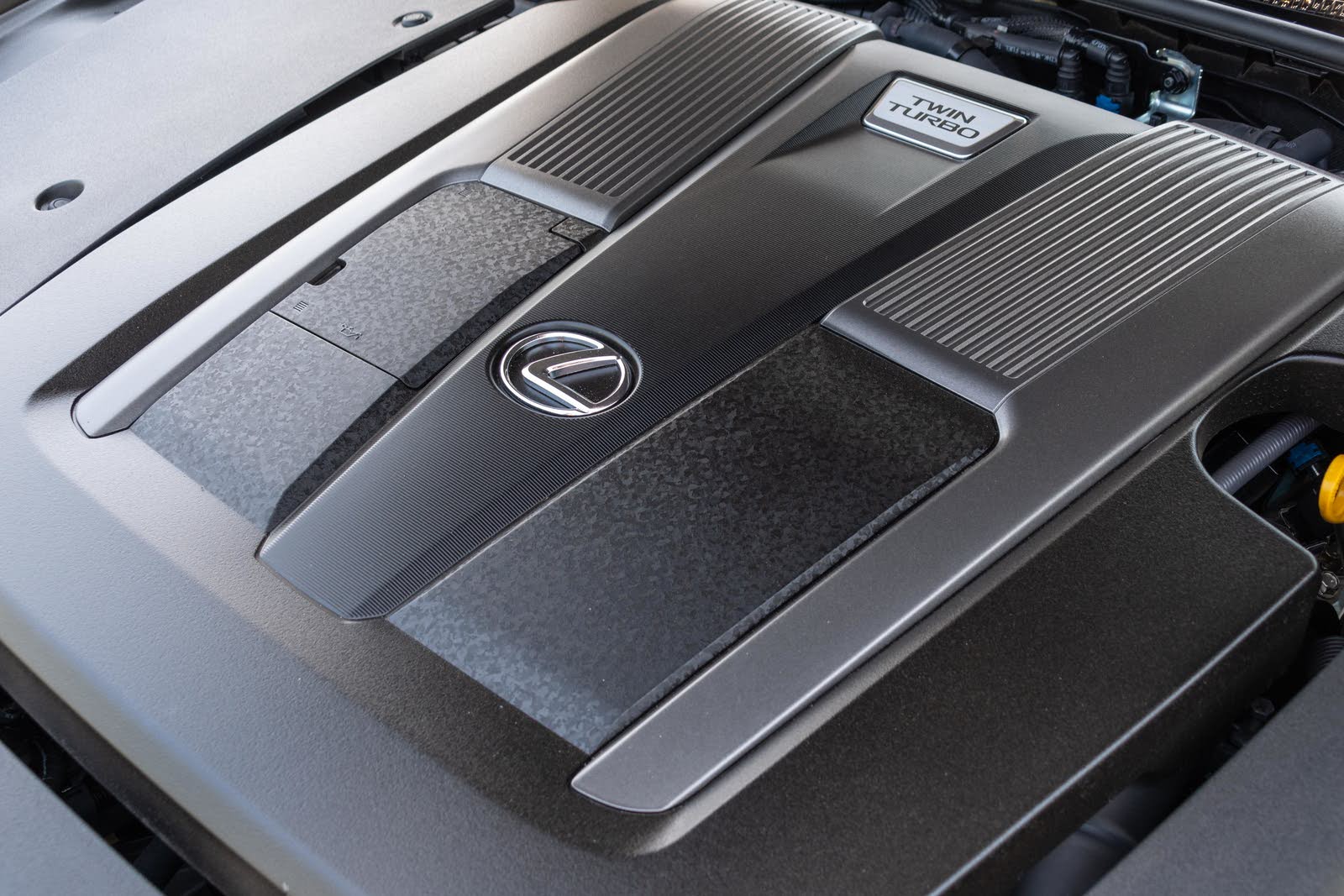 The LS 500 comes with one powertrain. Instead of the previous model’s V8, the new LS employs a twin-turbo 3.5-liter V6 with 416 horsepower and 442 pound-feet of torque mated to a 10-speed automatic transmission, and with either rear- or all-wheel drive. The LS 500h is a gas-electric hybrid with two electric motors, a lithium-ion battery, and 354 combined horsepower. The hybrid’s transmission combines a continuously variable transmission and a conventional 4-speed automatic to simulate the ratios of the 10-speed. We’ve experienced that powertrain in the mechanically identical LC 500 coupe and came away impressed by its smoothness, thrust, and seamless blend of electric and gas-powered operation. In the all-gas LS, acceleration is strong across the rev range, and there is no noticeable lag. Trust us: With two turbos and 10 gears on board, you won’t miss eight cylinders. But if you really, really like driving, the LS 500 F Sport—specifically, this rear-wheel-drive version with the optional $9,700 F Sport Performance Package—is the way to go.

In short, this trim makes the LS 500 feel like a luxury cruise ship that corners like a speedboat. It combines rear-axle steering, active stabilizer bars, staggered summer tires, and variable-ratio steering to give the impression that the car is riding on a wheelbase as short as a small Subaru's. The rear-axle steering makes tight, low-speed maneuvers a breeze—you can make U-turns like you would in a compact car—and at higher speeds, it makes the steering ultra-responsive. Combined with our car’s adaptive air suspension and the F Sport’s stiffer tuning, the LS 500 is rock solid on twisty roads in a defiantly un-Lexus fashion. It’ll still sail along in Comfort mode, absorbing pavement cracks as if they were nothing but twigs, but in Sport+, you won’t be prepared for how well it handles, brakes, and steers.

Fuel economy is rated at 19 mpg city and an impressive 30 mpg highway for RWD models. The AWD version knocks this down to 18/27, while the hybrid injects significant gains at 25/33 (RWD) and 23/31 (AWD). Over 830 miles, primarily on highways, we averaged 22 mpg, or one less than the EPA’s 23 mpg combined estimate. 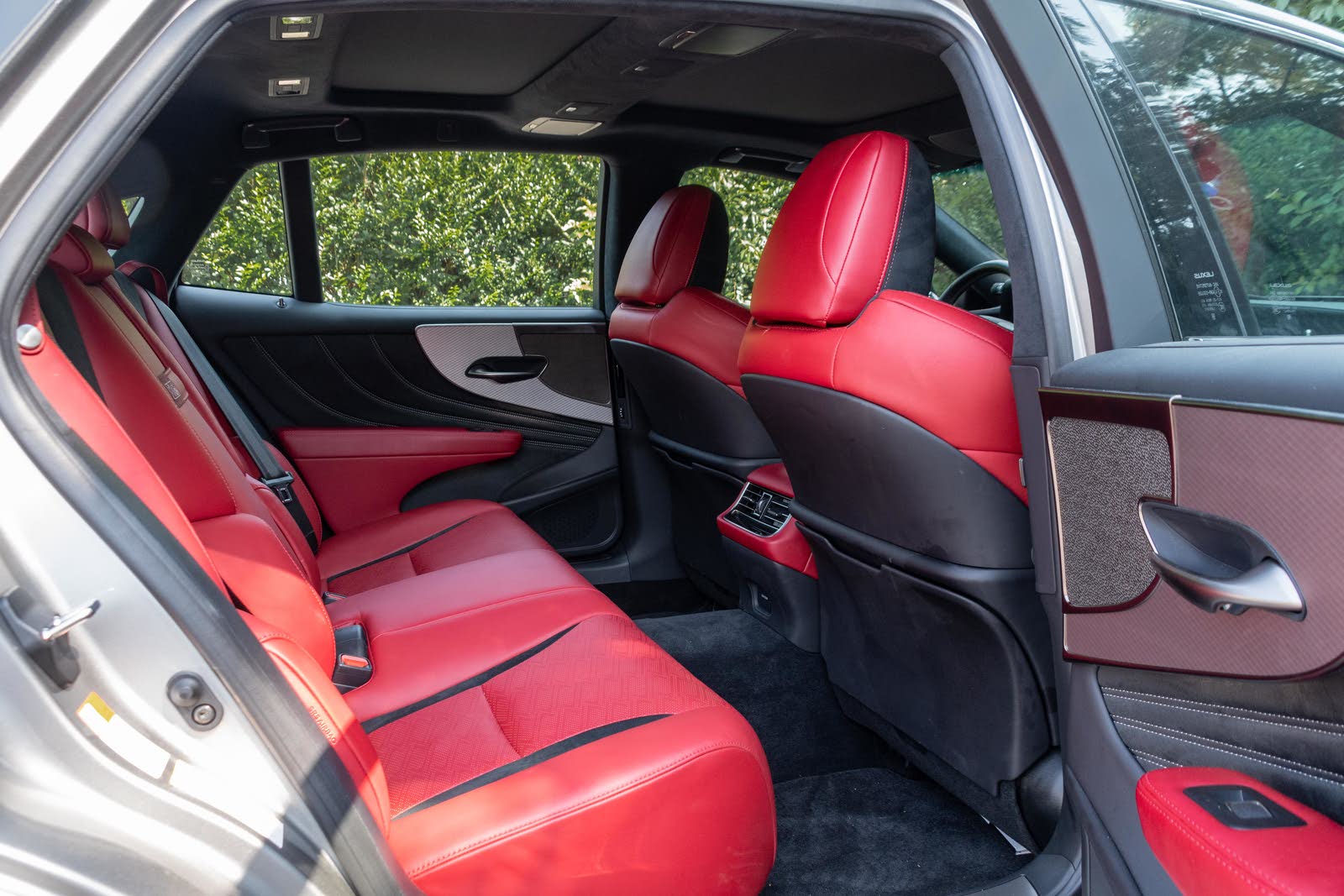 There are some glaring issues with this car’s functionality, but first among them is the annoying touchpad Lexus continues to employ in all its cars. It’s difficult to maneuver the cursor anywhere on the screen, which often leads you to 1) select the wrong item, 2) press the wrong button on the center console, 3) swear out loud, or 4) all of the above. The main screen is not touch-controlled, although the voice assistant does respond quickly to navigation addresses and other functions. Still, the graphics are lower in resolution and frankly, look like they came from a Toyota Highlander. The instrument cluster is a similar affair. While it’s nifty to see the tachometer bezel slide to the right, revealing a secondary screen, it all looks the same as in the entry-level IS sedan. Lexus can and should do better for its flagship model. We’re also peeved that Lexus doesn’t include rear-seat amenities for power reclining, massaging, and other functions on the F Sport, as they’re available on regular LS 500 models.

Problems aside, the LS 500 is spectacularly roomy in every dimension. Door openings are gigantic, so there’s never an issue with slouching or crouching when entering or exiting the car. Sightlines for the driver are also exemplary. A 17-cubic-foot trunk swallows just about everything (and it should, given the rear seatbacks don’t fold down). But the infotainment system’s poor functionality—not its features—are the main drag on an otherwise stellar experience. 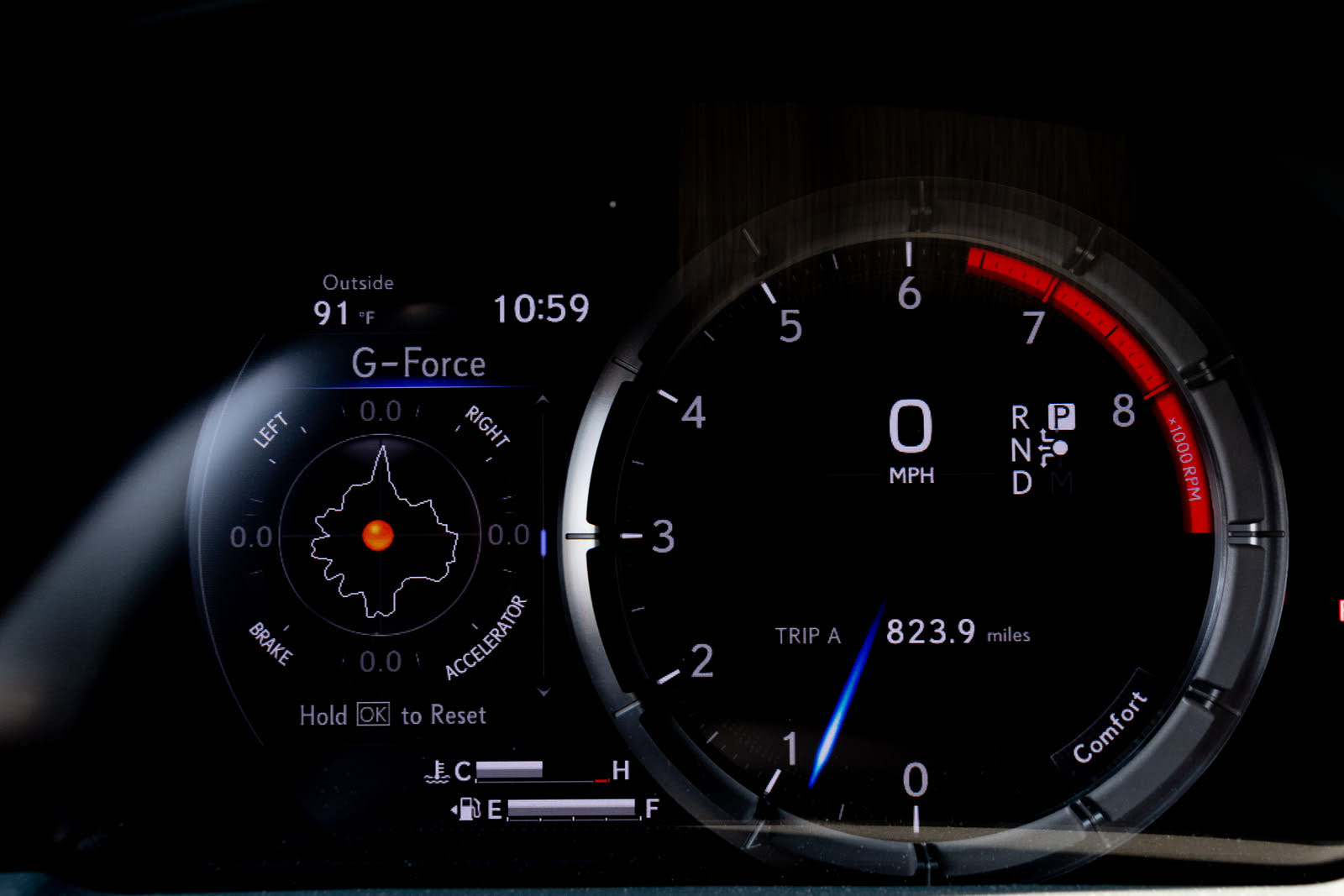 In addition to all the usual features typically found on high-end luxury cars, Lexus has some original tricks no one else has copied yet. First is the Lexus Concierge, which syncs the seat and steering-wheel temperature to your desired temperature so you won’t have to fiddle with them separately. (And let us tell you, the cooled seats actually feel like you're resting against an open refrigerator—they’re that good.) The air suspension has an “entry height” that automatically raises the body upon exiting so it's easier to slip inside when you return. An onboard owner’s manual with videos describing each of the (many) driver-assistance systems is available on the main screen. And while parking, the 360-degree cameras can automatically pan around the vehicle to make detecting obstacles much easier. Open the navigation system, and you can program custom routes like you would on Google Maps and check the traffic specifically on these roads without the car rerouting you to roads it prefers. Our car’s optional 24-inch head-up display ($1,220) is the widest anywhere and can even project arrows alerting you to pedestrians on the roadside. If that’s not enough, the 23-speaker Mark Levinson stereo will project some of the crispest high notes you’ll ever hear in a car. Long cruises are no problem in the LS 500. 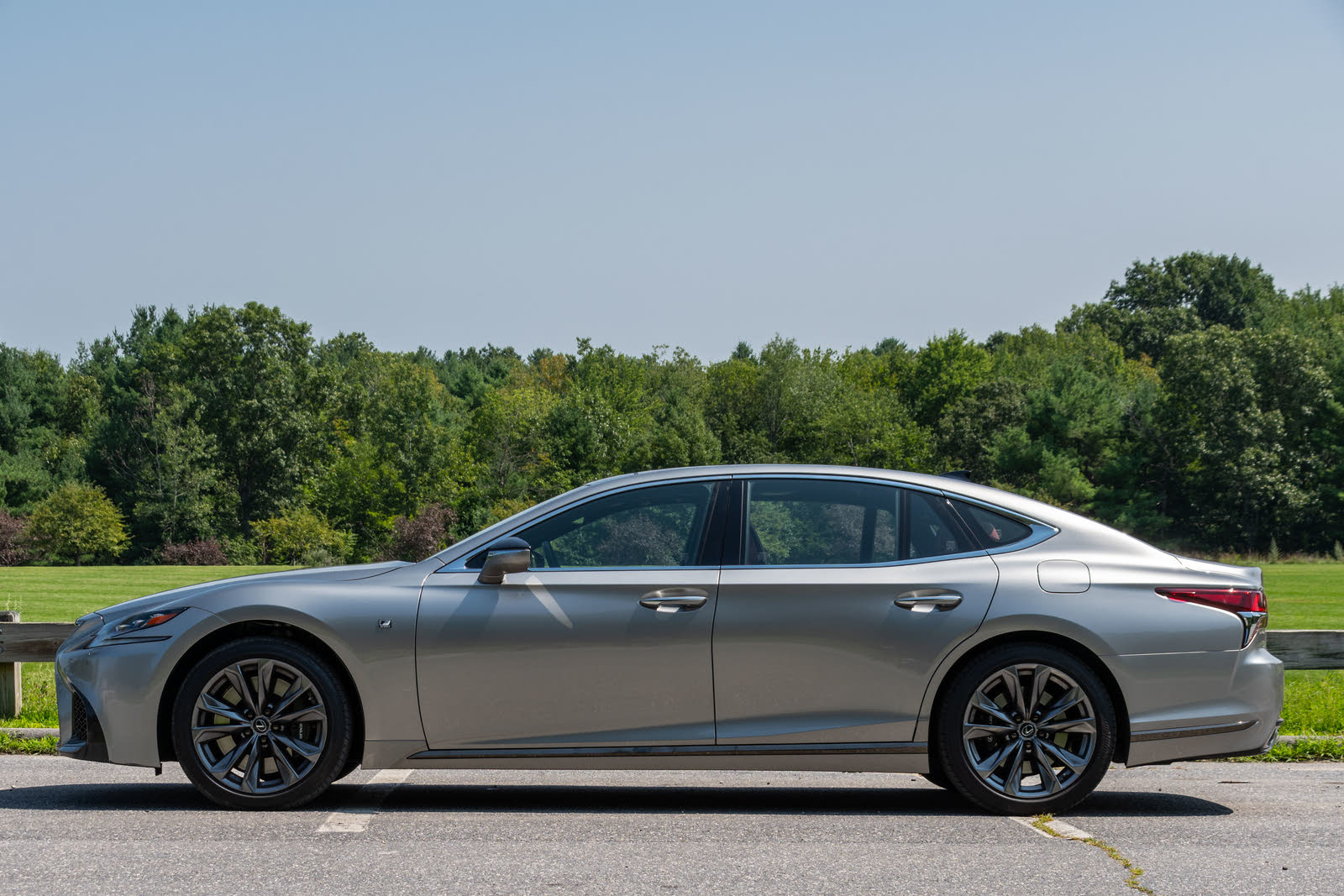 The LS 500 has not been tested by the Insurance Institute for Highway Safety nor the National Highway Traffic Safety Administration. However, we expect top ratings in all categories. Lexus includes rear-side thorax airbags as standard equipment, a feature not included in most cars (and optional on many German luxury sedans). Lexus Safety System+ comes standard with automatic emergency braking, pedestrian detection, lane-keep assist, adaptive cruise control, and auto high beams. Blind-spot monitoring is also standard. To get active steering for semi-autonomous control on marked highways, front cross-traffic alert, and road-sign detection, you’ll need to pay $3,000 for the Lexus Safety System+ A. Lexus includes telematics services, such as stolen-vehicle alerts, automatic 911 dialing after a crash, and roadside assistance, for 10 years as part of the standard Enform Safety Connect. 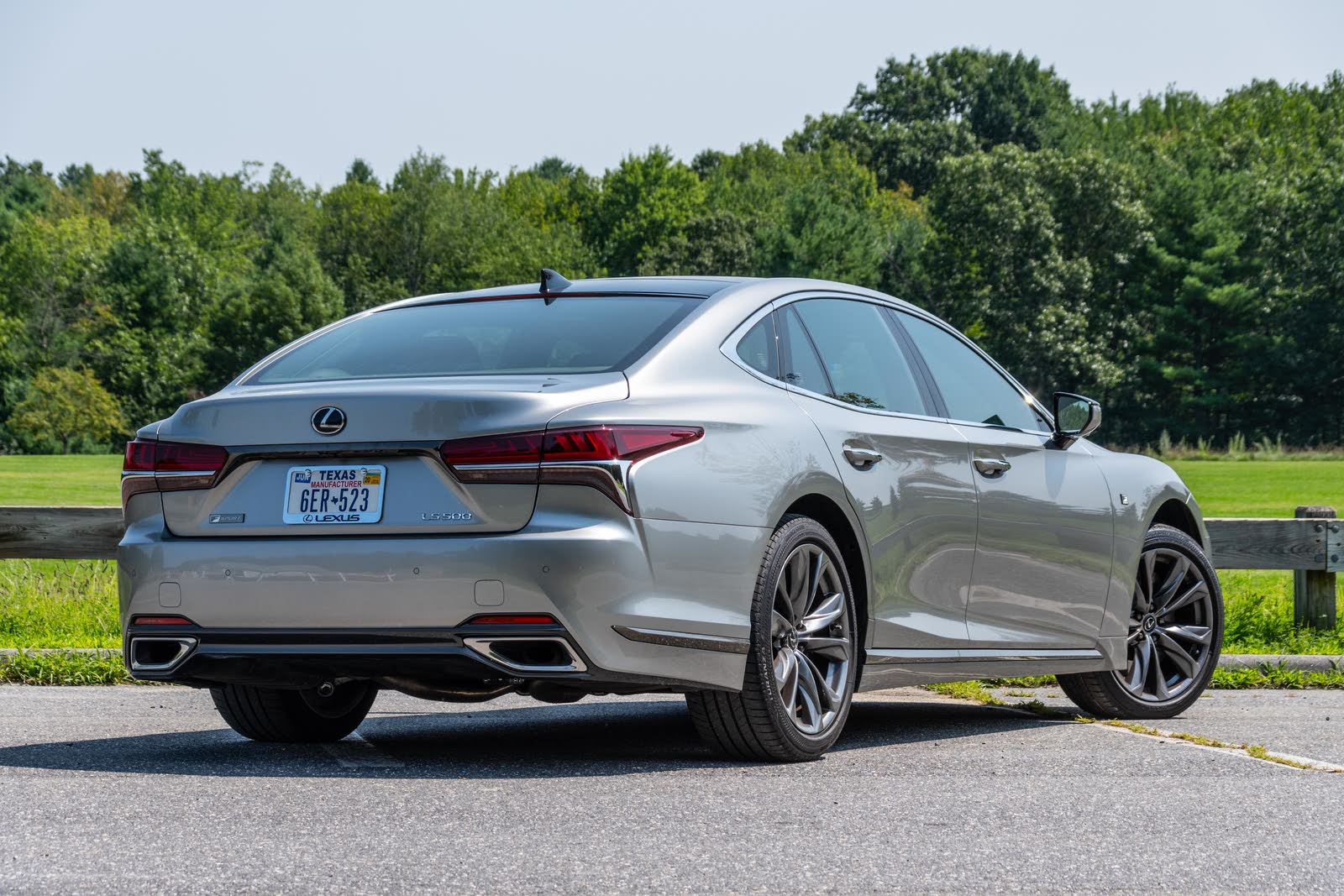 Fully loaded at $101,675 with destination, our LS 500 F Sport was, without exaggeration, a value compared to similar competitors that typically run 20 or even 30 grand higher. The $75,000 base price offers a lot of amenities—and remember, you can’t get into a Mercedes S-Class for less than $90,000. The F Sport starts at $81,000, while the hybrid LS 500h begins at $79,510. All-wheel drive adds $3,220 to all trims. Despite being able to max an LS 500h to nearly $120,000, the big Lexus is still competitive against the world’s best 6-cylinder large luxury sedans—and even some of the more powerful V8s. Sumptuous, lavish, and surprisingly fun to drive, the new LS 500 is a polarizing but undeniably smart choice in the segment.

GuruZND89 what is the size of the trunk?