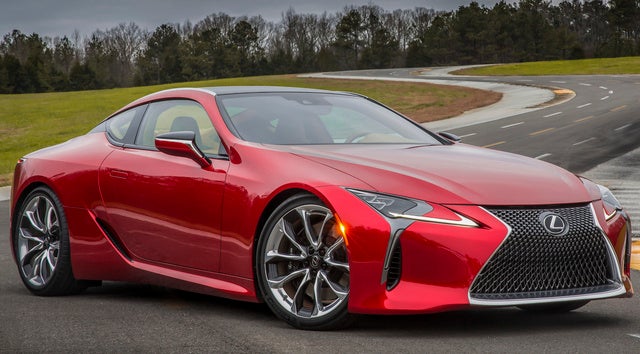 As Lexus moves towards building cars with more driving enjoyment, it has tweaked a few existing models and introduced some entirely new ones like the LC 500, which is set to become the company’s flagship model. The 2018 LC 500 is a 2-door V8-powered luxury sports coupe similar to the retired SC 430, but with more credibility in the performance department. A somewhat low-volume, exclusive model, its dimensions are comparable to those of the Mercedes-Benz S550 Coupe and BMW 650i. Lexus expects to sell about 400 per month, 15 to 20 percent of which will be of the LC 500’s hybrid sibling (sold as a separate model, the LC 500h). The LC 500’s MSRP comes in at $92,000, though adding enough options could raise the total to six figures.

Most of the 2018 LC 500 is completely unique, with inspiration drawn largely from the LF-LC concept car that debuted at the 2012 Detroit Auto Show. One familiar element, however, is the powertrain. The LC 500’s 5.0-liter V8 engine, also used in the RC F and GS F, sends 471 hp and 398 lb-ft of torque to the rear wheels. Unlike so many other performance luxury cars out there, the LC 500’s V8 is normally aspirated, with a 0-to-60 time of 4.4 seconds. The exhaust opens wider for a louder, throatier note above 3,500 rpm, but yes, the LC 500 is one of those cars that pipes exhaust sounds into the cabin.

The transmission is one of the most surprising elements of the LC 500. Not that long ago, an 8-speed transmission was quite an exotic concept, until some higher-end vehicles got 9 speeds. The LC 500, however, trumps even those with its 10-speed automatic gearbox, which will likely be beneficial for fuel-efficiency purposes. The first 7 gears are closely and evenly spaced, while 8, 9, and 10 are overdrive gears.

Lexus claims that the new LC 500’s Global Architecture – Luxury (GA-L) platform, which will also be featured on the upcoming LS sedan, is the stiffest unibody the company has ever built—including the old LFA hypercar. Up front is a multi-link suspension with lightweight aluminum components, dual ball joints, and 2 upper and 2 lower control arms that keep the hood of the car low. The rear suspension is a more conventional multi-link unit with coil springs and electronic adaptive shock absorbers, and brakes are 13-inch discs with 6-piston calipers up front and 12-inch 4-piston calipers at the rear. As for weight savings and distribution, the LC 500’s body is made of a combination of steel, aluminum, and carbon-fiber-reinforced plastic, with a composite trunk floor, no spare tire, and an available carbon-fiber-reinforced plastic roof.

On the interior, the LC 500 lives up to its luxury performance car status, with surfaces swathed in leather, suede door panels, up-to-date convenience and technology features, and an attractive analog clock. The back seats are small but not claustrophobia-inducing, which is the norm for this type of coupe. The LC 500 comes standard with a reversing camera and a Pioneer audio system, which can be upgraded to a 13-speaker Mark Levinson sound system.

The LC 500 comes equipped with the Lexus Safety System+, which includes all-speed dynamic radar cruise control, automatic high beams, lane-keep assist, and a pre-collision system that will automatically apply the brakes to avoid a collision. It hasn’t yet been crash tested by the usual authorities, but it’s reasonable to expect this brand-new design, with the most rigid chassis in Lexus’ history, to perform well. A sportier “F” model will likely be released down the road to go up against BMW’s M cars and Mercedes-Benz’s AMG models. Lexus has been working to improve its performance-focused offerings to better compete in the luxury sports car segment, and the 2018 LC 500 is another step in the right direction.

59bugeye Great styling as with all Lexus coupes (squashed hourglass grill excepted), but performance-wise, a '17 Stingray Z06 will smoke it to 60 by over a second (3.2 with a 7 speed manual trans, 2.95 with an 8 spd auto) and still leave you with roughly 35K in (msrp) pocket change. The 'vette may not have all the glam trim, but all the leather in the seats won't beat ponies under the hood. Just sayin'...

Creon I have a corvette and i completely agree, except I guess the real issue is you don't understand what the car is. You compare it to a Z06 because of the price but its more comparable to the actual 2LT Stingray Z51 or Grand Sport. Its not a sports car its a Luxury coupe that performs. So for any corvette owner that isn't satisfied with the missing luxury from there car you look at this vehicle to satisfy your luxury crave. Unless you hitting the track or street racing the 0.6 seconds you missing no daily driver will ever notice, but any daily driver of a corvette who isn't beating on it daily notices the luxury the car lacks daily. So the best i thing I can say is know who you are and what your desires are before you consider this car. i have the corvette and I just upgraded or down graded based off your belief to this Lexus and i must say getting a 1yr old certified car has made it a better all around deal considering warranty coverage for a vehicle with this type of performance. I will explain, the car comes standard with a 4yr 50K mile warranty, the certified vehicle adds an extra 2yrs with unlimited miles and a max extension to that 2yr warranty for an additional 3yrs for an extra $42 a month. So to sum it up my cars warranty started Mar 21, 2018 the vehicle is covered until March 21, 2027 with a zero deductible unlimited mile bumper to bumper warranty. Tell me where can you find a corvette with that type of coverage for out of the pocket cost. I will be beating on my car for the next 9 years and never be concerned about what repair cost may arise from it. I loved my vette but I considering I'm only paying an extra $96 a month for so much more I'm not caring bout the "1" second that was mentioned before.

Users ranked 2018 Lexus LC against other cars which they drove/owned. Each ranking was based on 9 categories. Here is the summary of top rankings.

Why Isn't My Price Correct During Search

I edited and changed the price on my car several days ago, the price is correct after opening the ad but is not correct in the searched where all are listed