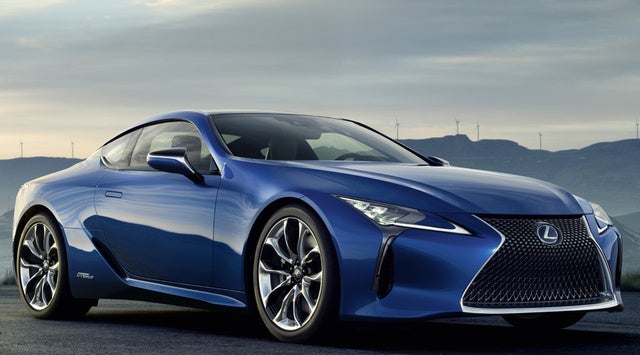 As Lexus aims for even more performance credibility with the all-new LC 500, the company is following up on that model with the fuel-sipping hybrid LC 500h, also slated for a 2018 debut. While the two models look almost identical aside from a few badges and a different shifter, the LC 500h is far from just a standard car with a lithium-ion pack slapped onto it. Its internal-combustion system is entirely unique, and it essentially comes with two transmissions on tap that are dramatically different from the LC 500’s 10-speed automatic.

The 2018 LC 500h features what Lexus has named its new Multi-Stage Hybrid System. It’s a complicated system consisting of a continuously variable transmission (CVT) that incorporates 2 electric motors as well as a conventional 4-speed automatic transmission. Lexus claims it will eliminate the “rubber band” feel of many other CVTs and keep the engine in the appropriate part of the rev range at more optimal times with a more direct throttle response. In Normal or Eco mode, the LC 500h will drive like a conventional hybrid with a CVT, and in the Sport and Sport+ modes, its transmission will behave more like the 10-speed in the standard LC 500.

While it’s much more efficient, the LC 500h falls far behind the LC 500 when it comes to performance. Whereas the LC 500’s V8 engine puts out an impressive 467 hp, the 3.5-liter V6 in the LC 500h makes just 295 hp and 348 lb-ft of torque. Even with another 59 hp from the larger electric motor in the Multi-Stage transmission, it still falls short on power, and the hybrid system adds about 150 pounds of extra weight. Still, Lexus claims this is its first hybrid that can spin its tires on dry pavement. Fuel-economy figures aren’t out for this brand-new model, but it’s reasonable to expect a highway number in the high 30s. The LC 500h can drive on all-electric power up to 87 mph, whereas previous Lexus hybrids could only manage a maximum of 62 mph. Its lithium-ion battery is 20 percent smaller and 45 pounds lighter than the company’s previous unit, while also packing more voltage and capacity.

Aside from the powertrain, the LC 500h shares much of its platform with the LC 500, meaning it has what Lexus claims is the stiffest unibody the company has ever built—and that includes the old LFA hypercar. This same platform will make its way to the upcoming Lexus LS sedan, as well. The LC 500h boasts a multi-link front suspension with plenty of aluminum components, dual ball joints, and 2 upper and 2 lower control arms that keep the hood of the car low. The rear suspension is a multi-link system with coil springs and electronic adaptive shock absorbers. At the front, it’s equipped with 13-inch disc brakes and 6-piston calipers, and at the rear, with 12-inch disc brakes and 4-piston calipers.

The LC 500h’s well-appointed interior is also very similar to that of the LC 500, with swaths of leather, suede door panels, modern convenience features and technology, and an analog dash clock. The back seats of this 2-door coupe are small but manageable, and the car comes standard with a reversing camera and a premium Pioneer audio system—although a Mark Levinson sound system is an available upgrade. The LC 500h has not been crash tested, but active safety features include all-speed dynamic radar cruise control, automatic high-beam assist, lane-keep assist, and a pre-collision system with automatic braking.

While the introduction of the performance-oriented LC 500 allows Lexus to better compete against its German rivals, the LC 500h’s main goal is to blend luxury with fuel efficiency as the world starts to slowly venture away from internal-combustion engines. It has an unconventional and advanced transmission system, but there isn’t anything groundbreaking about the way it drives—and it’s certainly not revolutionary in its looks, either, although it is undeniably quite attractive.

Users ranked 2018 Lexus LC Hybrid against other cars which they drove/owned. Each ranking was based on 9 categories. Here is the summary of top rankings.

Have you driven a 2018 Lexus LC Hybrid?
Rank This Car